On this occasion we will narrate the legend of the mystery of Obanos. The story takes place in the village of Óbanos, in Navarre. Today, the legend is recreated in the village through a play during the week of the day of Santiago, on the 25th of July. This celebration has been declared a Festival of National Tourist Interest.

Legend of the mystery of Obanos

This legend tells the story of a girl named Felicia, daughter of the Dukes of Aquitaine. On one occasion she heard a troubadour speak of the tomb of the Apostle St. James and of the pilgrimage that so many people made to reach it.

Felicia was from a very good family, she never lacked anything and lived a noble life. It seems that the only work she did was the typical work of a woman of her social class in the Middle Ages. Felicia read poems, composed songs and sewed for much of the day.

But what she heard from that troubadour aroused her curiosity and she began to plan her trip to start her pilgrimage, even though her father and brother Guillén did not approve of her starting this adventure. His desire to make the pilgrimage and leave behind a life of luxury and comfort was greater than his family’s opinion.

The adventure begins for Felicia

Ignoring his family’s warnings about the dangers he would encounter along the way, he set off with his entourage in the direction of Compostela. But what he found was not danger, but a road full of misery, poverty and disease.

After arriving in Santiago and visiting the tomb of the apostle, he decided to stay there to help the most needy, which would completely change his way of understanding life and make him appreciate the little things much more. Felicia stayed at the Caserío de Amocaín, in the Egües valley near Pamplona, taking care of the land, animals and other tasks of the farm.

Time passed, and her brother Guillén, seeing that she did not return, decided to go and look for her. Guillén asked from village to village until he found her in that hamlet, where he tried to convince her to return to the castle, to continue with her noble life. He insisted that she should not abandon her future as she would regret it all her life, but in spite of everything he did not manage to convince her. 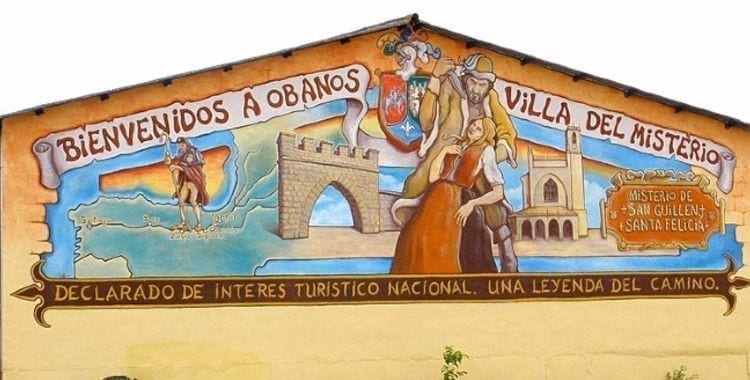 The tragic story of Guillén and his sister

Guillén, sad and at the same time angry about his sister’s decision, became so enraged that out of control he killed her with a sharp cut to the neck. Realizing what he had done and repenting of his sister’s murder, he set out for Santiago to seek forgiveness for mortal sin.

They moved the lifeless body to the hamlet of Amocain where they buried her in anger and pain. All were left incredulous when after a few days a beautiful flower sprouted from the tomb, and when they opened the coffin they realized that it had sprouted from the mortal wound caused by the sword of his brother, becoming a miraculous and holy event.

Mourning and grief after Felicia’s death: origin of the legend of the Mystery of Obanos

The residents of Amocaín made an oak chest for Felicia’s body. They placed it with her body inside the church, but the next day it appeared in the middle of the field. They wanted to raise the chest to put it back in the church but it was impossible.

The ark was very heavy, so the priest ordered mules to carry Felicia’s body as far as they would go. But for some reason when the mules were on the spot, the coffin became much lighter and they were able to carry it.

Guillén, after returning from Santiago, decided to stay as a hermit in the chapel dedicated to Santa María in Arnotegui, located on the hill near the village of Óbanos. He dedicated his whole life to the pilgrims and to the works of charity, and was also proclaimed a saint by the village after his death.

We hope that you have enjoyed this little story as much as we have. We are looking forward to learning more legends about the route, so if you know one, please do not hesitate to use the comment box.