The first milestone of today’s exciting journey towards Santiago de Compostela, we will find it in the monumental collegiate church of Iria Flavia, the first parish that we will set foot on after leaving the urban centre of Padrón. After stopping to contemplate this significant monument, our route continues through small villages and neighbourhoods that follow the course of the N-550 road and the railway line. On some occasions, you will have to cross the railway track, so you will have to be extremely careful.

A Escravitude is the next landmark we will reach. Here, we can visit the Sanctuary built in the 16th century on the so-called “Fonte Santa”. As in so many other places along the way, this place has a legend to tell. It is said that the waters of the “Fonte Santa” healed a pilgrim suffering from hypopresia, on his way to Compostela. After three days, the man was miraculously cured and exclaimed: “Grazas Virxe, por librarme da Escravitude do meu mal” (translated into Spanish as: thank you Virgin, for freeing me from the slavery of my evil); and this is where the toponym A Escravitude comes from. We continue our journey taking extreme precautions between the asphalt stretches and the crossings over the train tracks.

The next enclave of reference is A Picaraña, where you can take the opportunity to make a technical stop for refreshments.

After the short rest, the hardest part of the stage begins: the ascending slopes. We head towards Faramello and Teo along ascending paths. At this point we can make a small detour on the way to Castro Lupario, also known as Castro de Beca. It is believed that this castrexo settlement was the home of the mythical queen Lupa, who appears in the Codex Calixtinus. 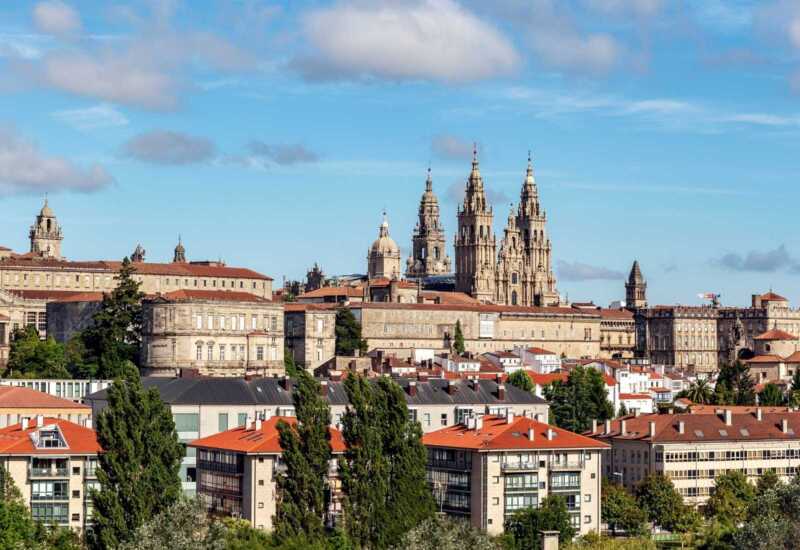 There is little left and the next point of our adventure brings us closer to the imminent end. We will pass through Osebe before entering O Milladoiro. Here we can already appreciate a strong change in the landscape that heralds the periphery of the urban space of Santiago de Compostela. Finally, we enter Santiago de Compostela by the hand of the mythical neighborhood of Conxo, a place that once constituted a municipal entity itself, until it was swallowed up and annexed by the growth of the Galician capital. At this point, you can stop to visit the church of Santa Maria, located in the alameda of the neighborhood.

Dear friends, the end is already counted by the minute. We only have to walk along the streets of Sánchez Freire, García Prieto, Rosalía de Castro and Rúa do Franco to find ourselves in front of the imposing façade of the Cathedral of Santiago in the Plaza del Obradoiro.

Congratulations pilgrim, you made it!

You are in Santiago de Compostela, the city where rain is art. After having stamped the credential at each stage and having collected your Compostela, after all the effort it’s time to enjoy the city, you’ve earned it. We hope you enjoy strolling through the old town, enjoying a fresh beer accompanied by a delicious tapa, dancing and singing in a foliada, or tasting some of its traditional liqueurs, among a thousand and one other things that this small but great city has to offer.

Don’t forget to pick up your Compostela at the Pilgrim’s Welcome Office in Santiago is located in Rúa Carretas, which is accessed from the Plaza del Obradoiro by Rúa Costa do Cristo, and although it is open from 12:00 to 16:00, we recommend going for a walk early from Padrón and go with time to avoid queues.