Santiago de Compostela, the capital of Galicia, is one of the most historic and important cities in the Galician territory. Presumably of Roman foundation, in its memory it keeps significant events in the history of our country, such as the passage of the Celts, the Swabians, the discovery of the tomb of the Apostle Santiago in the 9th century, or the attack suffered at the hands of Muslim troops. of Almanzor in the 10th century.

The historic center of the city has been part of the UNESCO World Heritage network since 1985. A fact that is not surprising, since despite its magnificent state of conservation, the old town annually witnesses one of the greatest phenomena of Christian pilgrimage of humanity: the Camino de Santiago.

During the Middle Ages, after the discovery of the remains of the Apostle Santiago in the 9th century, the start of pilgrimages and the beginning of the construction of the Cathedral in the 11th century, the city of Santiago lived its golden age. This time will suppose a period of sustained growth, only interrupted in the year 997 by the incursion of the Muslim troops of Almanzor, which devastated the city but respected the tomb of the Apostle.

Coinciding with the reconstruction of the city, the project of the current Cathedral and the rise of the medieval city will begin. The walls of the historic city were raised and in the 12th century the city experienced the golden age of pilgrimages, hand in hand with the French Way. This pilgrimage route would be the vehicle for the transmission of ideas and advances from Europe to the Iberian Peninsula, and therefore, the greater commercial and cultural dynamism of the cities located on the route. A good example of this is the expansion outside the city walls and the subsequent founding of the University. 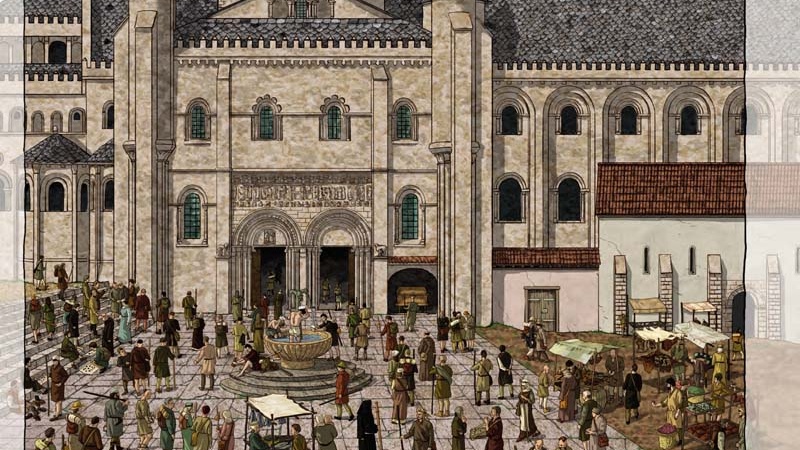 Throughout the 16th and 17th centuries, the city underwent its greatest aesthetic revolution at the hands of the Renaissance and Baroque movements. It is the moment of creation of the great patrimonial works of the city and of the opening and the urban beautification.

At present, the city is one of the most dynamic in Galicia, due to its capitality it is the seat of multiple public institutions, in addition to being a tourist attraction at an international level, thanks to the Camino de Santiago, and presenting the most consolidated university headquarters in Galicia .

Heritage: the key points to get to know the city

The main heritage elements of Santiago de Compostela are to be found in the historic centre of the city. It is mandatory for the visitor to know Cathedral , as well as the four squares that surround it: Obradoiro, Platerias, Quintana and Azabacherías. In the Plaza del Obradoiro, in addition to the imposing Baroque façade of the Cathedral, there is the Hostal de los Reyes Católicos (Renaissance style), the Pazo de Raxoi (baroque style) and the Colexio of San Xerome , behind which is the beautiful Pazo de Fonseca , of which part of its dependencies are currently used as a university library. 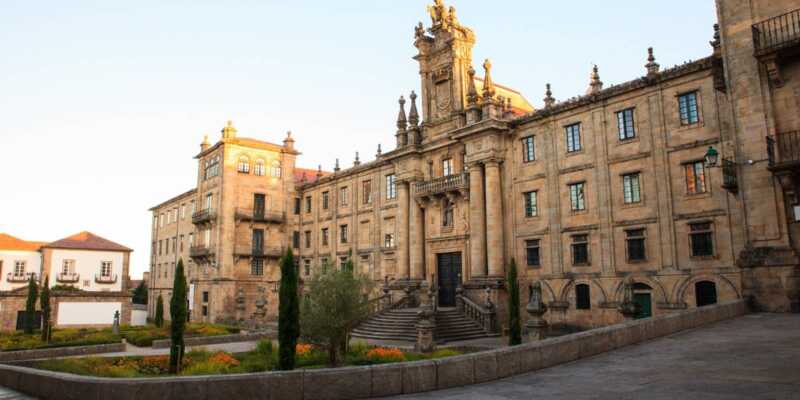 In front of the Plaza de Azabacherías, is the monastery of San Martín Pinario , a beautiful building that combines Renaissance and Baroque styles. At present this building has religious and university functions. In the rear rooms of the building is the monastery church. To tell the truth, all the squares of the cathedral have exceptional buildings around them, in the Plaza de Quintana we find the Casa da Conga and in Platerias the Cabildo House .

Another iconic point of the historic center is the asoportalada Cervantes square. It is a very dynamic area, visited daily by hundreds of people from Compostela and which hosts cultural events and concerts during the festivities. Other places with similar characteristics are the Toural square and the Mazarelos square , which preserves the beautiful arch of Mazarelos, one of the entrance gates to the medieval city. 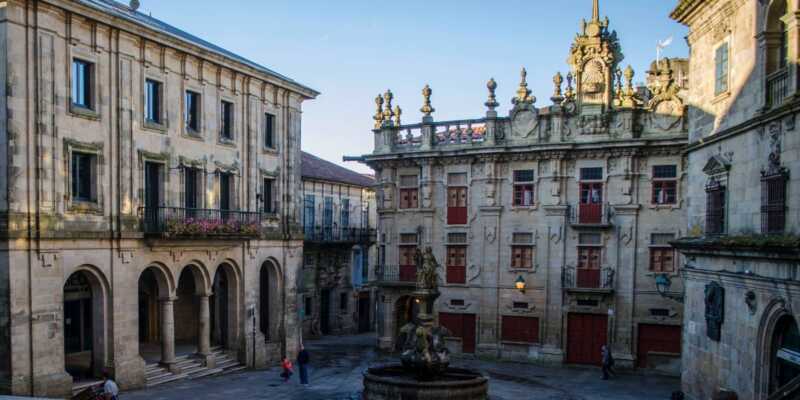 Other notable buildings in the city are the Faculties of Medicine and Geography and History , and the Convent of San Francisco . In addition to emblazoned houses, modernist buildings and typical architecture of the area, which are dotted throughout the historic center.

Walking through the old town of Santiago de Compostela is like walking through a fairy tale, so exploring all the hidden corners in all its streets is a delight for the senses. Each street has its charm and personality, and despite the dynamism and the number of establishments and services that they present, one of the things that is most surprising is the very good integration that exists between “life” and the conservation of the monumental area. 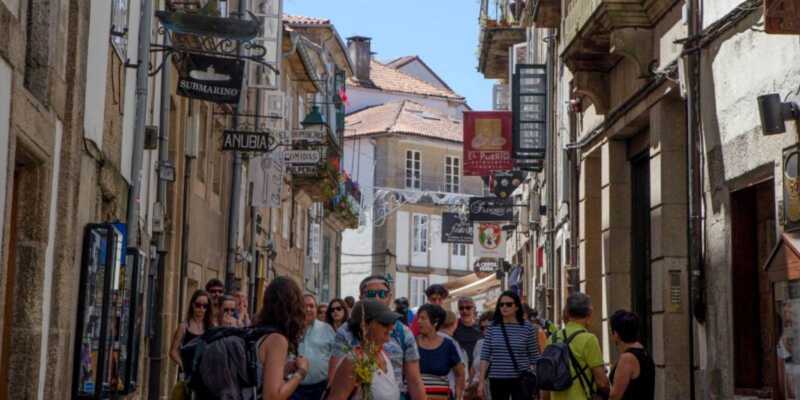 To top it off, the beautiful Compostela is one of the European cities with the most kilometers of green area per inhabitant. The impressive Alameda parks, in the nerve center of the city, the extensive green areas of the university campuses, the Bonaval park, Belvís park, Eugenio Granell park or the river path of the Sarela river.

Move in the city

One of the greatest virtues of Santiago is its accessibility and ease of movement. It is a city well provided with urban transport lines, but in practice, walking tours are perfectly acceptable, as it well shows the map of travel times between the main landmarks of the city, prepared by the university.

With regard to external connections, Santiago is connected with the rest of Galicia by the highway of the Atlantic axis (AP-9) and through the train and bus stations. With the rest of Spain, the city shows good connections both by land (train and road) and by air, through the city’s airport located in Lavacolla.

Gastronomy of the city

Compostela’s gastronomy is very rich and varied. In fact, one of the main points of interest is undoubtedly the food market, where you can find the best products in the area. From fish and seafood, to red and white meats with a Galician quality label and fresh vegetables produced in the surroundings of the city.

In addition to the surroundings of the Mercado de Abastos, where there are restaurants specializing in preparing for the customer the purchase made by themselves in the market, we find the iconic and busy streets of San Pedro, O Franco and A Raíña. Together with the food market, these three streets make up the mosaic and hive of the leisure, food, wine and vermouth area of the city.

The University represents one of the fundamental pillars on which the development of the city of Santiago orbits. This is something that brings a lot of freshness and vitality to the city, since during the months of the academic year the population of Santiago multiplies as a result of the thousands of students who come from all over the world.

No matter if it is day or night, Santiago de Compostela is tremendously varied and dynamic. Santiago is a city with a lot of cultural life, in which it is common to find multiple events and daily concerts in its main bars. In the same way, there is a panorama of the folk and traditional world very settled in the city, which allows the appearance of “spontaneous” foliates in the places of reference of the genre. 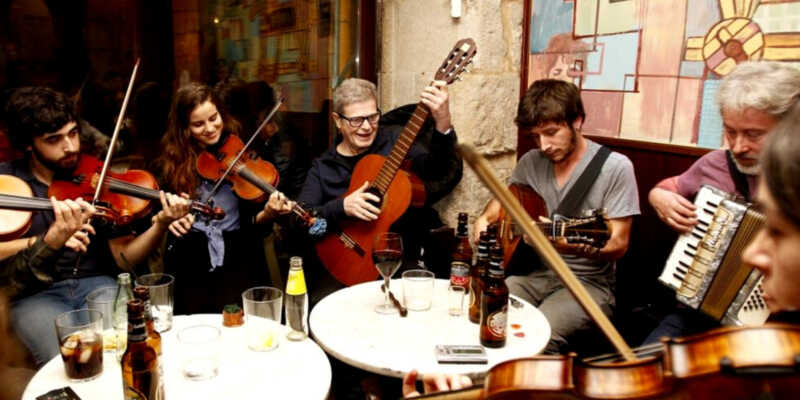 The nightlife offer is completed by sectors of the city, in which there is room for all ages and tastes. From folk bars to rock bars, to nightclubs or relaxed places for drinks and cocktails, with impressive rooms and gardens.

The “taverns with art” that no one should miss are: El Atlántico, Casa das Crechas, A Gramola, El momo, Modus Vivendi, A Reixa, Riquela, La Flor, the terrace of the Hotel Costa Vella, the Embora, the Borriquita de Belén, or Fonte sequelo, among others.

Undoubtedly, the main event of the city is the festival held in honor of the Apostle St. James during the month of July, between the 15th and 31st. In this festival, declared a Festival of International Tourist Interest, the religious events in the Cathedral, the fireworks and the audiovisual show projected on the facade of the Cathedral on the night of July 24, the folk festival, concerts, theaters, sports competitions stand out. , etc.

Movie lovers find in the Cineuropa festival your must see of the year. This film-buff festival is held every year during the month of November and projects the best independent film releases of the season, as well as some leading titles from the world of cinema.

The International University Theatre Festival, held in March, brings to the city the most fashionable and innovative trends in the field of drama.

As far as musical events are concerned, Santiago enjoys the presence of different music festivals, such as the “Vía Stellae” music festival or the “O Son do Camiño” festival. It should be noted that the city also has a seasonal offer of classical music, led by the Real Filharmonía de Galicia.

As it could not be otherwise, the city of Santiago de Compostela has a large catalog of museums to visit, among which we can highlight: the museum of the Cathedral, the museum of the Pilgrimages, the Museum of Contemporary Art (CGAC), the Museo do Pobo Galego, the Casa da Troia, the Eugenio Granell Museum-Foundation, the Museum of Sacred Art or the City of Culture.