The Cathedral of Santiago de Compostela

The Cathedral of Santiago de Compostela has stood since the Middle Ages as one of the main centres of Christian pilgrimage. The many Jacobean routes are travelled every year by thousands of pilgrims who seek to finish their journey in front of this jewel of the Spanish Romanesque. Every year in which the 25th of July (the Apostle’s Day) falls on a Sunday, the Cathedral dresses up and opens its Holy Door to receive the
Xacobean Year
.

In its earliest origins, the Cathedral of Santiago de Compostela was a small mausoleum of the first century, built in order to bury the remains of the Apostle after his beheading in Palestine (year 44.d.C) and its subsequent transfer to Galicia. During the first centuries, this small crypt was regularly visited by a small local Christian community.

In the year 813 the miraculous discovery of the tomb of St. James the Apostle took place under the undergrowth of Mount Libredon. The bishop of Iria Flavia, the Asturian king Alfonso II ordered to build a first chapel of stone and mud next to the old mausoleum.

In 834, this temple received a royal Preceptum that made it an episcopal see and gave it power over the surrounding territories. Around it, seeking its protection, the first settlers and monastic groups of Benedictines in charge of the custody of the relics began to establish themselves. These were the first steps of the future city of Santiago de Compostela. 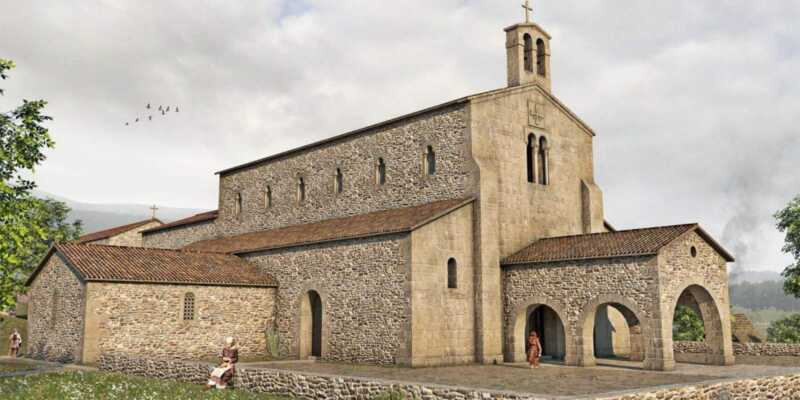 With time, the number of faithful who visited the sepulchre increased and the church became too small. Between 872 and 899 Alfonso III the Great had a larger church built. But this second church was destroyed by the attack of the Muslim leader Almanzor in 997. Bishop San Pedro de Mezonzo rebuilt it in 1003, in a pre-Romanesque style. This third temple was still standing when the boom in pilgrimages and the riches of Santiago, which was already one of the largest feudal lordships of the Iberian Peninsula, allowed to start building in 1075 the Romanesque cathedral that is preserved today, the fourth sacred building on the ancient tomb. 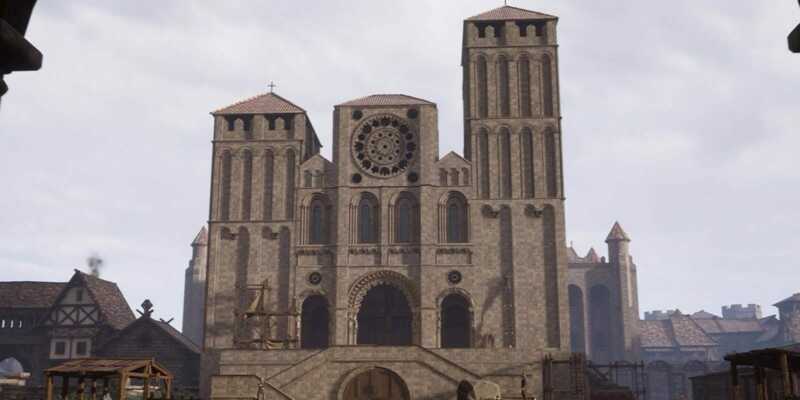 The Leonese king Alfonso VI and especially the first archbishop of the city, Diego Gelmirez they gave such a boost to the Cathedral, urban life and pilgrimages that the 12th century can be considered the most splendid in the history of Compostela. This time they did not settle for a sanctuary to house the relics, but designed a great pilgrimage cathedral in the style of the Camino de Santiago. The best Romanesque builders would parade through it until they reached the Master Mateo, author of the last sections of the naves, the defensive towers of the west, the crypt and, above all, the Portico de la Gloria, a sculptural ensemble without equal in Europe that even today presides over the west entrance.

Over time, Gothic, Renaissance and especially Baroque elements were added to the Romanesque floor plan. While the structure of the naves remained practically intact, the number and space of the chapels was adapted to the needs of worship. In the turbulent 14th century the basilica would acquire the traces of a fortress, with defensive towers such as the current Clock Tower. With the Renaissance, driven by the archbishop Alfonso III de Fonseca, the definitive cloister was erected, which replaced the Romanesque cloister and modified the entire south and southeast side of the temple. It was a time of internal reforms and addition of altarpieces, pulpits and sculptures for the greater glory of the cult of the Apostle.

The largest aesthetic revolution would come to the temple in times of the Baroque, which began in 1660 by transforming the high altar and the dome; then to shape the organs, to draw the canvas of the Puerta Santa, embellish the Clock Tower and reach its greatest splendour with the culmination, in 1750, of the most iconic image of the cathedral: its magnificent façade of the Obradoiro.

The Baroque masters of the Cathedral were also responsible for the final layout of the monumental squares surrounding the temple and many of the adjacent buildings. It can be said that the Baroque leapt from the cathedral to the squares, monasteries and noble houses, to turn Compostela into the imaginative, scenographic and dramatic city that today is recognized as ‘the Baroque city par excellence of Spain’.

The surroundings of the Cathedral

The Cathedral of Santiago de Compostela is located in the historic centre of the city. It is surrounded by four squares, which are the four entrances to the building: Plaza del Obradoiro, Plaza de Platerías, Plaza de la Quintana and Plaza de Azabacherías.

The Plaza del Obradoiro is the nerve centre of the city. Its Galician name seems to derive from the stonemasons’ workshops that worked on the construction of the Baroque façade of the Cathedral, which dominates the square and welcomes the thousands of pilgrims who arrive on the Camino de Santiago.

It represents the four symbols of power of the city: the themain façade of the Cathedral to the east, the symbol of religious power; to the west the Pazo de Raxoi, symbol of the civil power; to the north, the thehostel of the Catholic Monarchs, symbol of the monarchy and of the hospitality to the pilgrims; and finally to the south, the Colegio de San Xerome, representing the University. 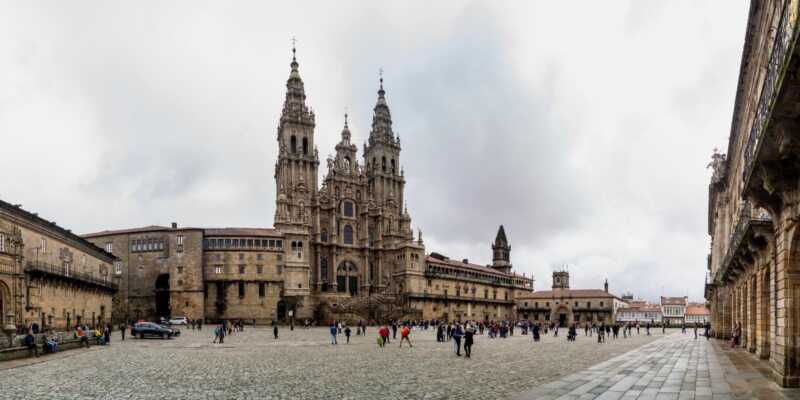 The south square of the Cathedral, Plaza de Platerías, owes its name to the goldsmiths’ workshops located since the Middle Ages in the cloister, is dominated by the only Romanesque façade that the Cathedral preserves.

In it we can find Romanesque figures that create a set of rich iconography. In the frieze there are apostles, angels and zodiacal signs. The center is occupied by a stylized Christ, with St. James at his side. In the portals, the tympanum on the left seems to represent the temptation of Christ, while the one on the right depicts clearly recognizable scenes from the Passion, the trial of Pilate, the scourging and the betrayal of Judas. Other figures such as King David and the creation of Adam decorate the side walls.

The portal of Platerías adjoins the Clock Tower, which receives the popular name of ‘Berenguela’ because it was the archbishop Berenguel de Landoira who finished its construction in the 14th century. This tower houses the largest of the Cathedral’s bells, also known as Berenguela. The original one from 1678 cracked and was replaced by the current one, which weighs 6,433 kilos and sounds a deep “do” when the clock of the s. XIX, with its single hand, marks the hours.

“It is said that if any midnight strikes not 12, but 13 bells, the devil will enjoy a magic hour to roam free.”

In the centre of the Plaza de Platerías stands the Fuente de los Caballos, one of the most beautiful and famous fountains in the historic centre of Santiago de Compostela. It is made up of four sea horses that spout water from their mouths. From between these horses emerges a pedestal topped by a female figure raising her arm with the star of Compostela. 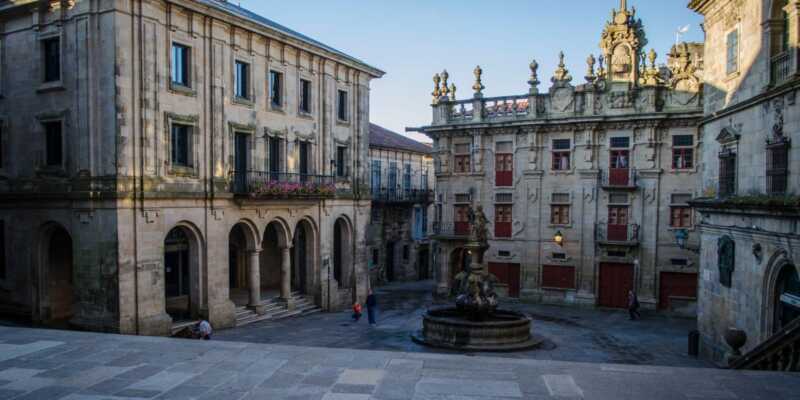 Behind the fountain and facing the Cathedral we find the Casa del Cabildo. The initial function of its construction was to close and beautify the Plaza de Platerías. It is one of the most unique buildings in the historic centre of Santiago de Compostela and one of the most beautiful examples of Baroque architecture in the Galician community. Today it belongs to the network of museums of the historic city and hosts numerous exhibitions that can be visited.

The Plaza de la Quintana is another of the most important squares in the city. It is divided into two planes. The lower part is called “Quintana de Mortos”, as it was a burial place until 1780. The upper part of the square is, by contrast, “Quintana de Vivos“. 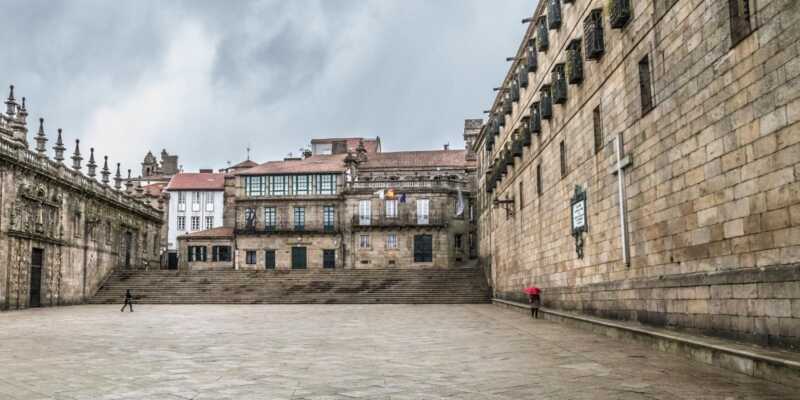 The imposing wall of the Monastery of San Paio de Antealtares delimits the square to the east. It was founded by Alfonso II in the 9th century to guard the recently discovered tomb of the Apostle. In its church you can admire an interesting Museum of Sacred Art that keeps the altar found next to the tomb of the apostle. Every day at 7.30 p.m., you can listen to the vespers service sung by the nuns of the convent.

The south and north ends are occupied by two baroque houses. On the south front of the square we can see the Casa de los Canónigos or Casa da Conga, a work of the architect Domingo de Andrade, the same author of the Berenguela Tower, which can be seen from the square, from the 18th century, and on the other side of the square, in front of it, the Casa de la Parra, a beautiful baroque building.

In the Plaza de la Quintana we find the famous Puerta Santa, goal of the pilgrims who come to Santiago in search of the Jubilee. Its anteroom is flanked by Romanesque stone figures from the stone choir of the Cathedral, carved in the 12th century by Master Mateo, whose reconstruction can be visited at the Cathedral Museum.

The Plaza de Azabacherías, also known as Plaza de la Inmaculada, is framed between the Monastery of San Martín Pinario and the cathedral façade of the Azabachería. It owes its name to the traditional presence of workshops dedicated to the carving of jet. At this point, the last urban section of the French, English and Northern Ways ends, which enters the historic quarter through the so-called Puerta del Camino. 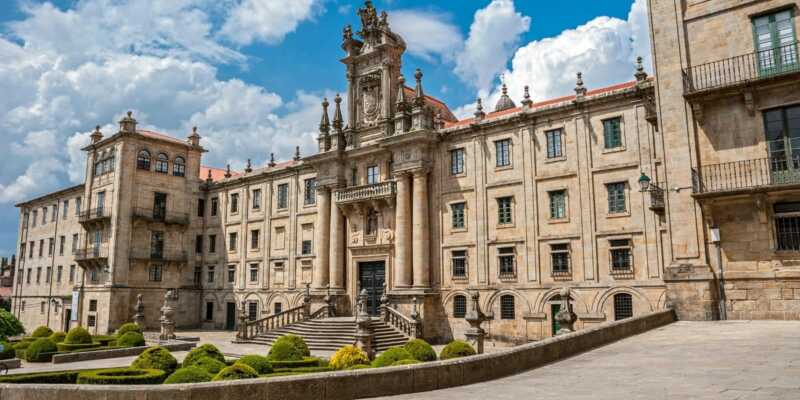 The primitive North façade of the cathedral is described in the 12th century Codex Calixtinus as ‘the Gate of Paradise’, not only because of its beauty, but also because it represented the story of Adam and Eve, original sin and redemption. In front of it was the Fons Mirabilis, a fountain now moved to the cloister, where pilgrims washed themselves before entering the cathedral. The medieval atmosphere was completed with the tables of money changers, mixed with sellers of shoes, leather and spices, and innkeepers offering accommodation.

Guide to visit the inside of Santiago de Compostela Cathedral

Its interior is divided into three naves crossed by the transept arm at the height of the transept transept. Over the transept there is an immense dome that illuminates the room. Behind the altar, the Cathedral has an ambulatory surrounded by small apsidal chapels. The central nave is the one crossed by the emblematic botafumeiro. The tribune is located above the lateral naves.

As is typical of Romanesque constructions, its vaults are barrel vaults and the arches on which they extend longitudinally, rest on pilasters with attached columns, which are decorated with plant and figurative motifs in their capitals.

On the main altar, the image of Santiago pilgrim stands out, installed on a spectacular canopy carved with celestial figurative elements, such as small angels, and presided over by an equestrian sculpture of the Apostle himself. Under the main altar is the crypt that holds the remains of St. James and his disciples Theodore and Athanasius. This is the holiest place in the whole Cathedral. 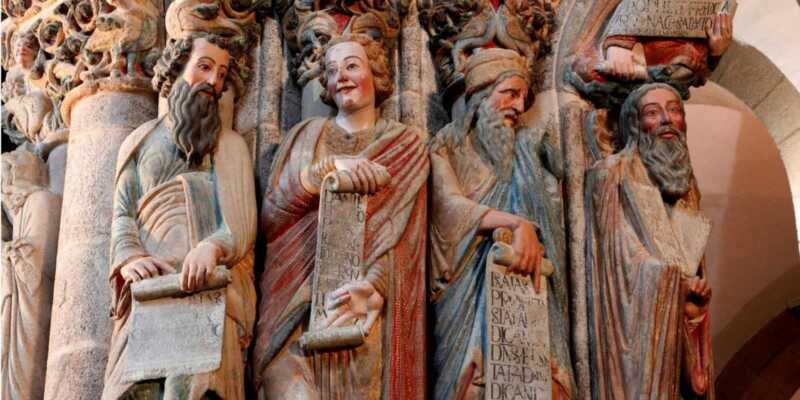 In the dependencies of the Cathedral, we also find the cloister, dated from the 16th century and the Cathedral Museum.