Way of the lighthouses

You know that feeling of wanting to scream with all your might? When was the last time you experienced a real sense of freedom? If you are passionate about hiking, if it makes you feel free and moves your senses like butterflies do to lovers, you have to get to know the Way of the Lighthouses, a complete experience for the senses: the explosion of colours of an unspoilt nature, the aroma and taste of the beating sea, the delicate softness of the sand and the gentle melody of the sea breeze. This, and much more, is the Camino de los Faros.

Our Trips to the Way of the Lighthouses 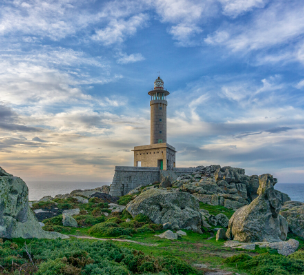 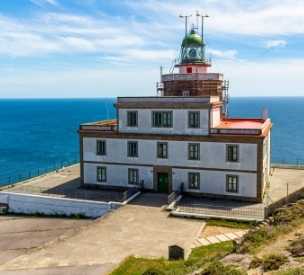 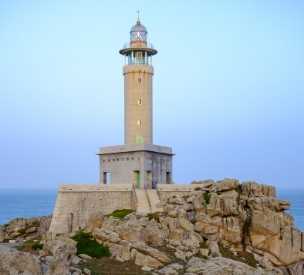 Why choose the Way of the Lighthouses?

The Way of the Lighthouses, baptized in Galician as “.O Camiño dos Faros” is a wild hiking route that connects the towns of Malpica de Bergantiños and Finisterre, from North to South, in the A Coruña region of the “Costa da Morte” (Costa da Morte in Spanish), having two main premises: that it is a path that runs as close as possible to the sea, in this case, the Atlantic Ocean, and at the same time, that it passes through all of the existinglighthouses along the route; we could mention a third premise, related to its proximity to the sea, and that is that the route can be walked safely, since there are inaccessible or very dangerous stretches of coastline, which are obviously avoided in the layout.

Thus, this Camino, and with these premises, results in a route of 200 kms of wild trails, with the Ocean (almost) always to our right, to the West, which will accompany the walker with a constant but relaxing breaking waves. But the Way of the Lighthouses is much more than that: sea, forests, mountains, capes, creeks, beaches, dunes, lagoons, heritage, stories, legends, shipwrecks, sunsets, gastronomy, and, of course, its villages and its people, so let’s learn more about this unique trail that, inexplicably, is still waiting to be approved as a Long distance footpath (GR).

What to see and do on the French Camino de Santiago?

Where to start the Way of Lighthouses?

The Camino de los Faros starts in the fishing village of Malpica, and whether you do the whole route, about 200 km during eight stages, or just the first four stages, about 92 km, your adventure will start from here.

This route is unparalleled, and will offer you the constant sound and freshness of the Atlantic Ocean, as well as the wildest landscapes in the most mythical area of Galicia, the Costa da Morte.

Starting in this small fishing village you will enter the heart of the Costa da Morte, and enjoy walking along its rugged coastline, where you will find ancient sacred places such as Punta da Barca in Muxía and, of course, the great culmination which is the end at the Finisterre Lighthouse.

Stages of the Way of the Lighthouses

On Friday, December 7, 2012, 6 hikers and 2 dogs went crazy, because they came up with the idea of joining Malpica de Bergantiños with Finisterre walking on the edge of the sea. And they succeeded, they really did. Their goal was to join both towns, in the heart of the “Costa da Morte”, parallel to the ocean and with the lighthouses as a link. They knew it could be done, although they were aware that it would be difficult, but they also knew it would be worth it. And so, on Saturday, January 26, 2013 they reached Cape Finisterre, the ancient Finis Terrae or End of the World known in Roman times, and its mythical Lighthouse.

These friends, self-styled “trasnos”, in reference to those little mischievous elves belonging to the Galician mythological culture, with equivalents in other parts of Spain and the World, achieved their goal and set another one: that this Way exists and persists, and that many people walk it, always respecting Nature to the maximum. In an exercise of generosity and love for the land, they decided to make it known, but for this the “trasnos” would need to improve the route, which they did on a second trip.

Thus, a collaborative will was added to this project, and through social networks they were able to convene 23 new “trasnos” to make the first stage, and after this experience, they understood the concern of the first “trasnos” and fell in love with this route. In the following group editions, they completed the rest of the stages, always supported by a warm response from new “trasnos”. We want to do our bit, and we are eager to introduce you to this Camino de los Faros.