The last 100 kilometers of the Camino de Santiago

Have you ever wondered where the Camino de Santiago begins? Faced with this question, most pilgrims think of Roncesvalles and the French Route, but they forget that there are other routes with other starting points. However, if we get historical, the road would actually start from the door of your house, so it could be said that there are as many roads as there are pilgrims. Today, cith the ease of transport and the few days we have for holidays, pilgrims often opt for to do the last 100 kilometres of any route, as it is a route that can be done in less than a week and allows you to reach Santiago de Compostela without a lot of accumulated fatigue. In addition, with that distance you are guaranteed, if you meet the requirements of two stamps per day on your credential, to obtain the Compostela.

You should know that all the routes, the last 100 kilometers of the Camino de Santiago, are within the Autonomous Community of Galicia, so with this option, the pilgrims will cross this magical region, with its landscapes, its people and its affordable but exquisite gastronomy. 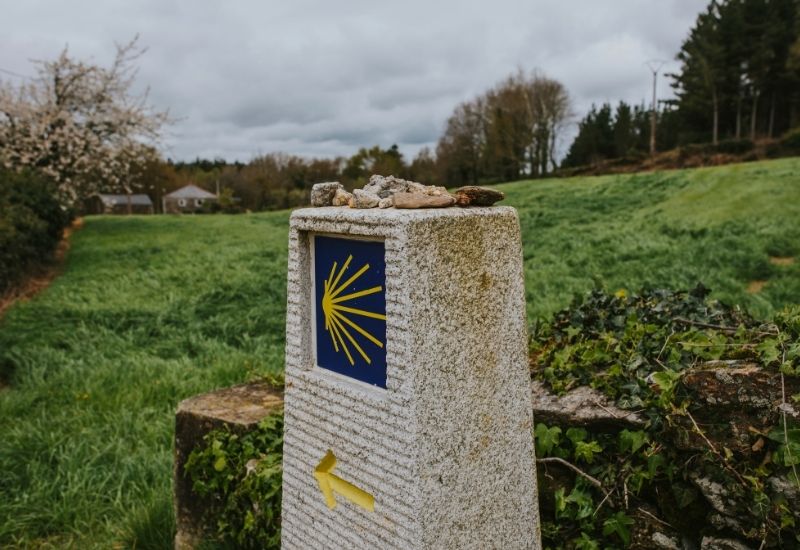 This historic road bears this name because it is the route that English, Irish, Scots, Flemish and even people from the Scandinavian countries made to avoid the French route, very long from their homes and full of dangers. These pilgrims embarked in the south of England, in ports such as Plymouth, Bristol or Portsmouth, among others, and arrived at ports in the north of Galicia such as A Coruña, Ferrol, Viveiro, etc., where they continued walking. Very important in the Middle Ages, with the Anglican Reformation in the Modern Age it lost many pilgrims. Today it is in slow but steady growth, with a total of 15,780 pilgrims in 2019. 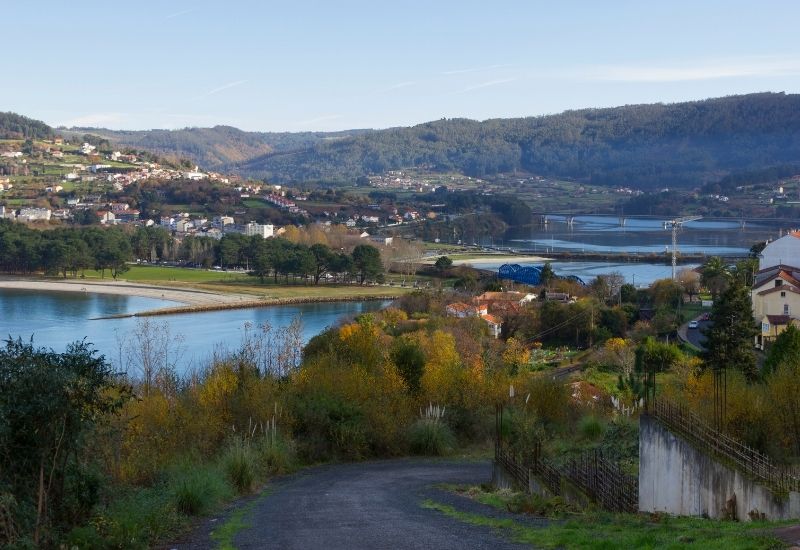 Although you can start from A Coruña, the distance from this city to Santiago de Compostela is only 73 km and does not reach the 100 km required to get the Compostela. On the other hand, from Ferrol, you will enjoy 113 km that cross the towns of Neda, Pontedeume, Betanzos, Hospital de Bruma and Sigüeiro. This route is very pleasant to walk, as it combines the waters of the estuaries of Ferrol, Pontedeume and Betanzos, with the rural landscapes of the interior of the province of A Coruña and, by the way, it is the only route that runs entirely through the same province. 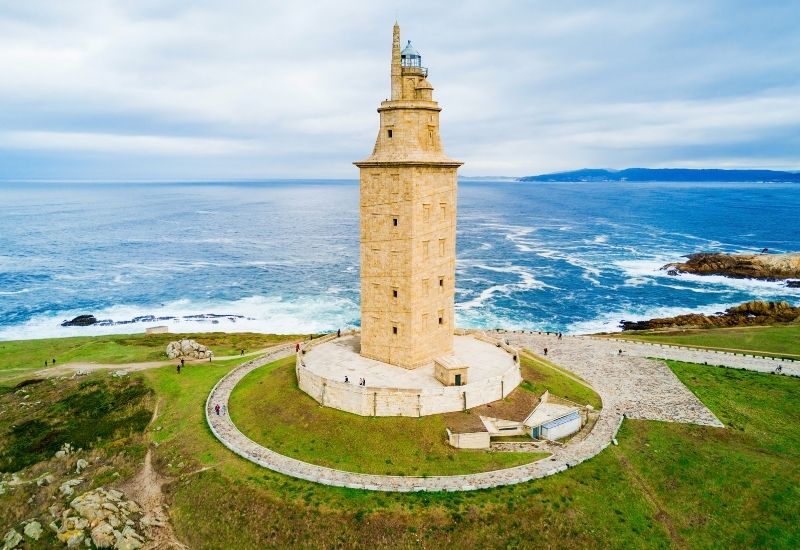 The North Road from Villalba (120 km)

This road, coming from the Cantabrian coast, crosses in its last 100 km the provinces of Lugo and A Coruña. The main towns are Villalba, Baamonde, Miraz, Sobrado dos Monxes, Arzúa and Pedrouzo. Although at the beginning it goes through a rural environment without big cities, it has monuments of great value, such as the Monastery of Santa María de Sobrado dos Monxes. It is a little crowded but moderately growing route, and in 2019 19,019 pilgrims walked it; don’t worry, in Arzúa it joins the French Way, with much more traffic. 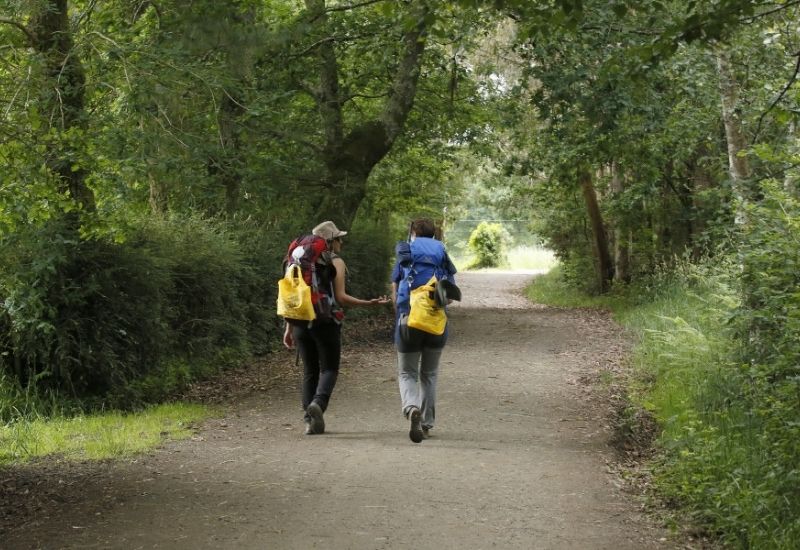 This is the route taken by what is considered the first pilgrim, the Asturian King Alfonso IX from Oviedo, after being summoned to the not yet existing city of Santiago de Compostela and making official the discovery of the remains of the Apostle. Sparsely attended but slowly growing, 15,715 pilgrims were recorded in 2019. The last 100 km cross the provinces of Lugo and A Coruña, and start in the beautiful city of Lugo, passing through Ponte Ferreira, Melide, Arzúa and O Pedrouzo. As with the Northern Way, it joins the French Way in Melide. 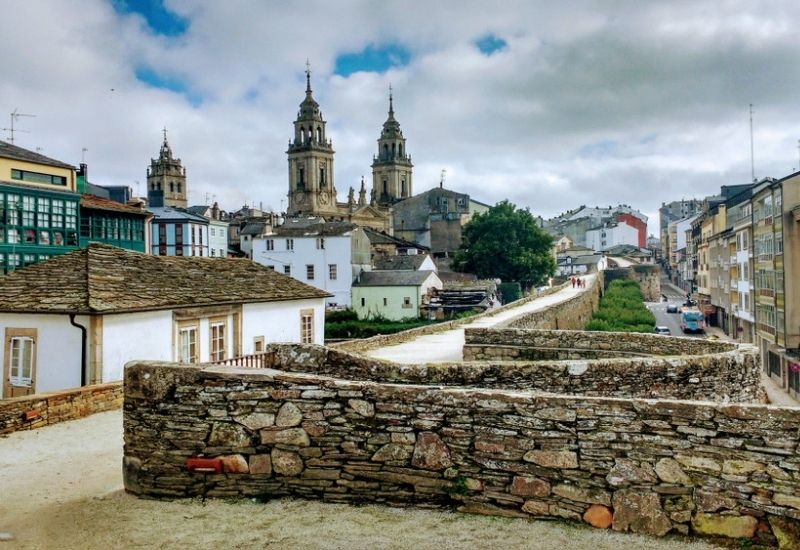 The route par excellence among all the routes to Santiago. With 189,937 pilgrims in 2019, year on year it breaks its own records, not counting 2020 and the COVID-19 pandemic. Crossing the provinces of Lugo and A Coruña, the last 100 km start in the town of Sarria and pass through Portomarín, Palas de Rei, Melide, Arzúa and O Pedrouzo, picking up pilgrims from the Northern Way and the Primitive Way. This route is traditionally very popular, as it includes a large number of origins, both from Spain and Europe, and it is also the best equipped in services. To get started on the pilgrimage to Santiago, it is the easiest and most comfortable option, which will also allow you to meet a lot of new people. 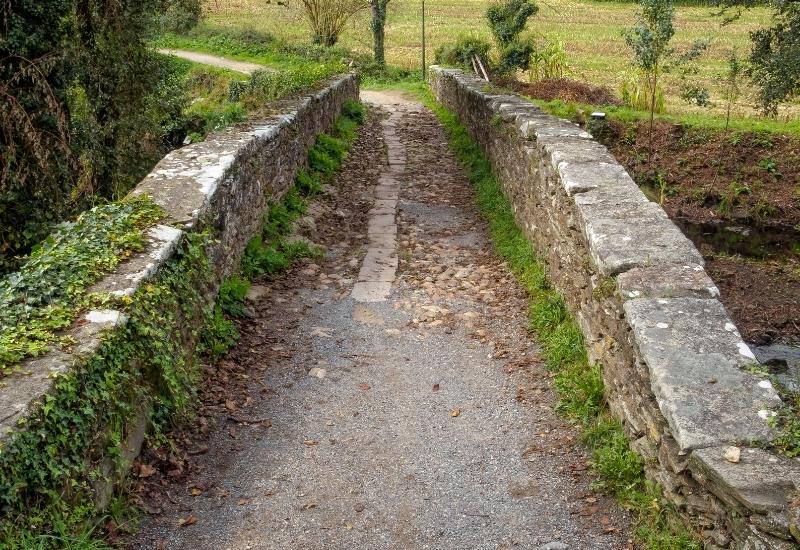 The Winter Way from Chantada (108 km)

This is a little-traveled route, with just 1,035 pilgrims in 2019. It crosses the provinces of Ourense, Pontevedra, Lugo and A Coruña, and the last 100 kilometres start in the village of Chantada, passing through Rodeiro, Lalín and Ponte Ulla. It is a very good alternative to the French Way in its entrance to Galicia, the mountainous area of the Ancares, which in winter, with its peaks over 1000 meters, receives generous snowfall. On this route, where you will find a much friendlier way to Santiago and without so much risk of snowfall, you should not forget to try the famous stew of Lalín to better combat the cold winter. 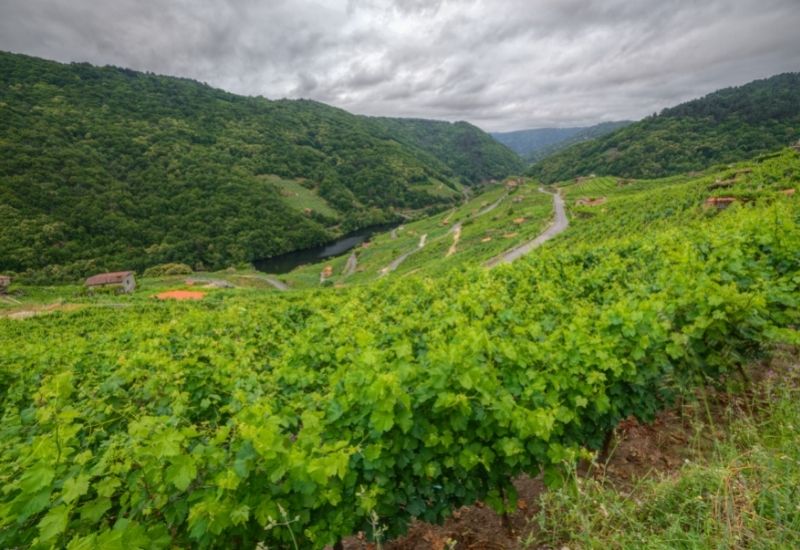 The Silver Route from Ourense (110 km)

So called because it is the extension of the ancient Roman Silver Route, in 2019 it reached 9,201 pilgrims. This Roman road linked the ancient Emerita Augusta (Merida) and Asturica Augusta (Astorga); although the route was used to transport the silver that arrived from America after its discovery in 1492, its relationship with the word “silver” is phonetic, as the Muslims called it Bal’latta. In reality it is a route that, in its final stretch, to reach Santiago de Compostela, can be reached by the French Way in Astorga or by the Sanabrés Way in Granja de Moreruela. With the first option, the last 100 kilometres would start in Sarria, already mentioned above, or through Ourense, beautiful thermal capital and also with a Roman past, and passes through Cea, Lalín, Bandeira and Santa Cruz de Rivadulla, crossing the provinces of Ourense, Pontevedra and A Coruña. 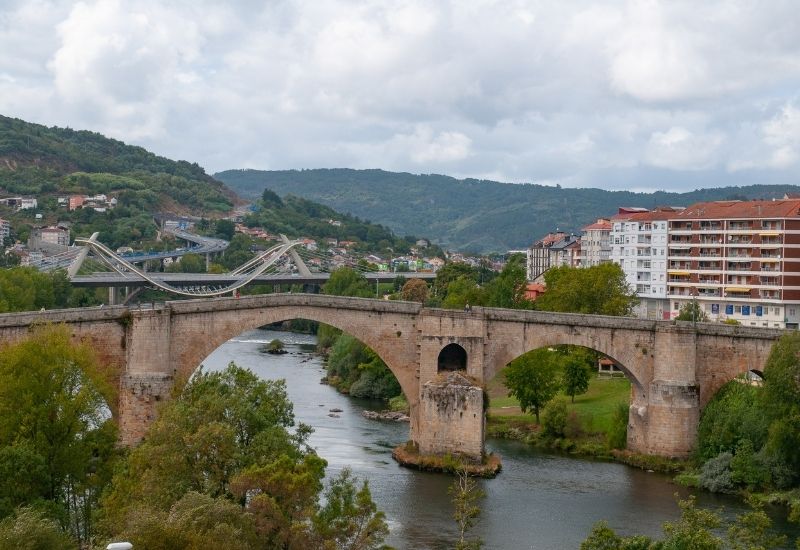 This is the second busiest route, with 72,357 pilgrims in 2019. Its name is due to its origin from the Portuguese country. It crosses the provinces of Pontevedra and A Coruña, and starts in Tui, a beautiful city at the foot of the Miño River and on the border with Portugal. It passes through the towns of O Porriño, Redondela, Arcade, Pontevedra, Caldas de Reis and Padrón. Much of its route follows the ancient Roman road XIX, which linked Bracara Augusta (Braga, Portugal) with Lucus Augusta (Lugo). With a combination of inland and sea in some points, you should not miss it, because in addition to the Compostela, you can get the Pedronía, a similar certificate that is issued in Padrón. 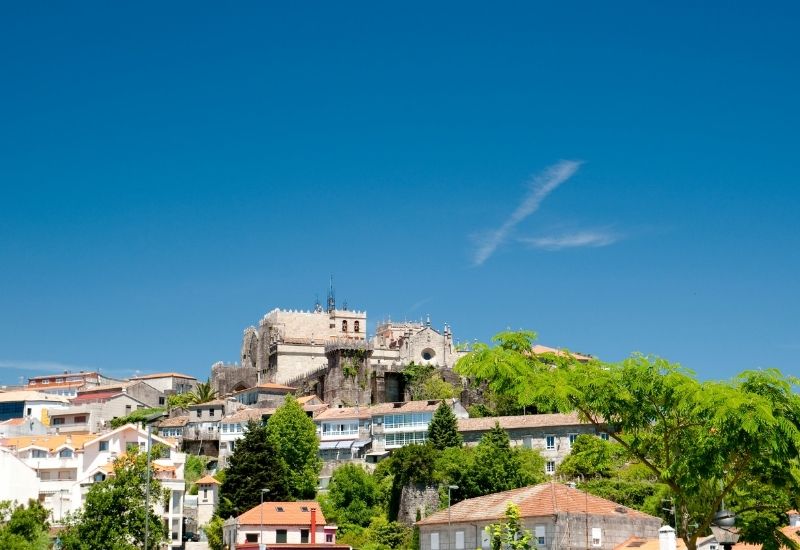 The Portuguese Way along the coast from Baiona (121 km)

This is a variant of the Portuguese Way from Tui: instead of starting in this town, it would come from the mouth of the Miño River, in A Guarda, and following the coast, from Baiona you would more than complete the 100 kilometers to get your Compostela. It passes through Vigo and, once it reaches Redondela, it follows the route of the Portuguese Way from Tui. In 2019, 22,292 pilgrims made it, being the third route in number of walkers. 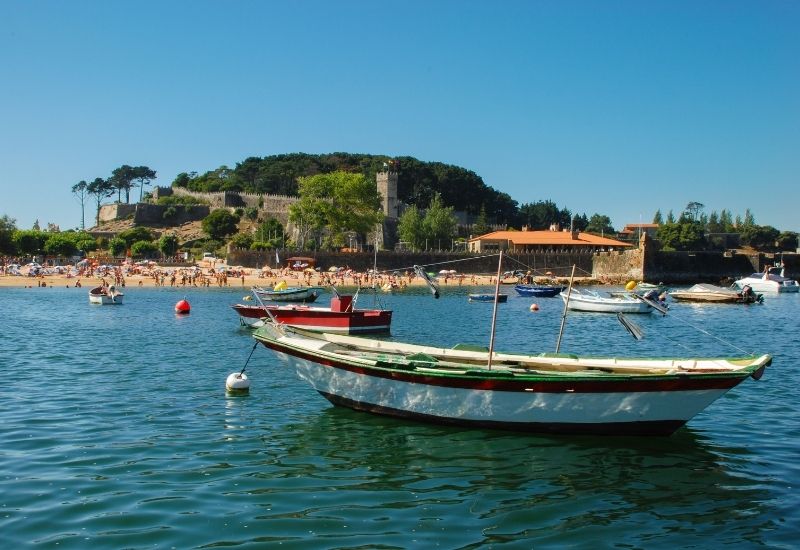