Soak up the party with the entroidos: the Galician Carnival

One of the most traditional cultural manifestations of Galicia and attached to the terroir are the entroidos or, what is the same in Castilian, the carnivals. As happens in Venice, Rio de Janeiro, Cadiz or Las Palmas de Gran Canaria, Galicia also celebrates these festivities that, although they are not so well known by the general public, are a substantial part of the Galician cultural heritage, where folklore, joy, picaresque and gastronomy merge to celebrate a party deeply rooted throughout Galicia, with different versions depending on the town where it is celebrated and that can also be enjoyed doing the Camino de Santiago.

To understand what entroido or carnival is, it is necessary to go to the history of the…

The entroido or carnival is nothing more than the name given to the period of time before Lent, which begins on Ash Wednesday, that is, forty days before the beginning of Holy Week and Palm Sunday. This calculation was established by the Roman Emperor Constantine the Great after the first Council of Nicaea in 325 AD. 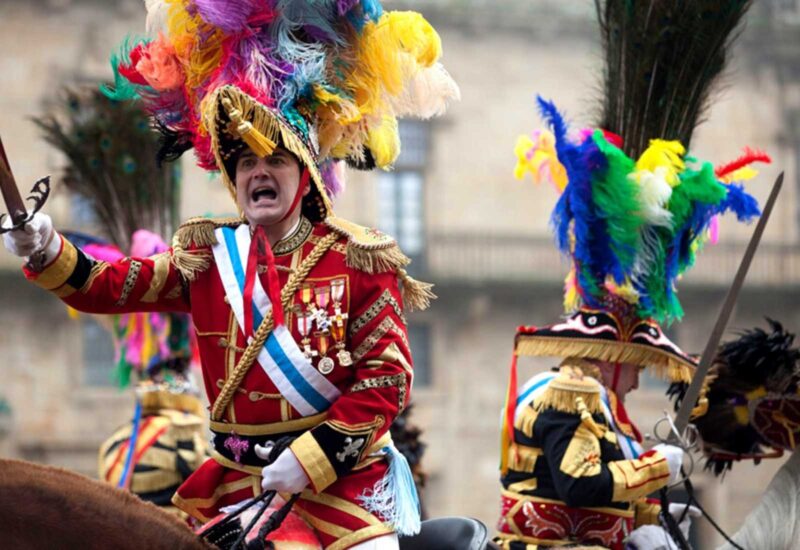 This tradition would have its origin already in Roman paganism with the “Saturnalias” festivities or even before, as it happens with many religious festivities that were adapted to the Christian religion as an instrument of conversion of civilizations. Elements such as the celebration of the end of winter, the promise of the beginning of spring and the illusion of good harvests and fertility would be at the basis of the concept of this celebration.

… and also the Roman Christian culture.

The term “carnival” comes from the Latin words carne (meat) and levare (to take away), that is, “to take away the meat”. Since during Lent, as a period of sacrifice and penance for the Passion of Christ, represented by fasting and abstinence from eating meat, the consumption of this food was forbidden, carnival was used to “remove the meat”, that is, to eat meat before it was temporarily forbidden during Lent. And in addition, (almost) everything was celebrated and allowed, because after that would come forty days of devotion and respect to the crucified messiah. That is to say, a period of feast before another of respect, and thus we would explain the origin of the term “entroido“, also derived from the Latin word introitum and that means “entrance”, that is to say, entrance to Lent. 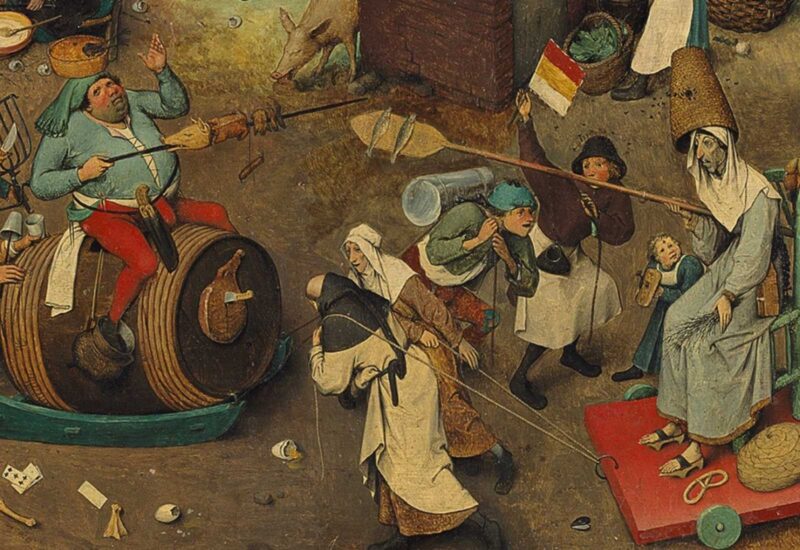 What does Entroido mean for Galicia?

The entroido is a long-established and highly anticipated festival in Galicia, which in many cases begins weeks before the date on which it is to be celebrated, that is, on Carnival day itself. Banned between 1937 and 1948 throughout Spain because of its libertine character, although it was not until 1977 when it was celebrated again with total normality, such was the rootedness that, despite the ban, in Galicia it continued to be celebrated, especially in rural areas.

It is more than just a festival. As an ethnological testimony of a culture, the entroido has been declared Intangible Cultural Heritage of Spain since 2017, and that of Xinzo de Limia (Ourense) is a Festival of International Tourist Interest. Another, like that of Verín (Ourense), is Fiesta of National Tourist Interest. Finally, seven more are Festivals of Tourist Interest in Galicia. Some municipalities in Galicia usually declare Monday or Tuesday of entroido as public holidays, even Ash Wednesday itself.

Of course, we strongly advise you to dress up in costume. The element of collective celebration, participatory spirit and shared joy is the norm. The most important entroidos of Galicia, in the province of Ourense, threaten with whip blows, flour baths, mud or live ants (very aggressive when bathed in vinegar) or simply pay a round of wine to whoever does not go in costume… whatever it is! Without a costume (and even if you wear one) you run the risk of suffering the weight of the law of this festival, which crowns its celebrations with opulent meals based mainly on pork, such as the cocidos whose ingredients come from the traditional pig slaughter in November, as well as the cachucha itself, typical creations of Galician gastronomy. 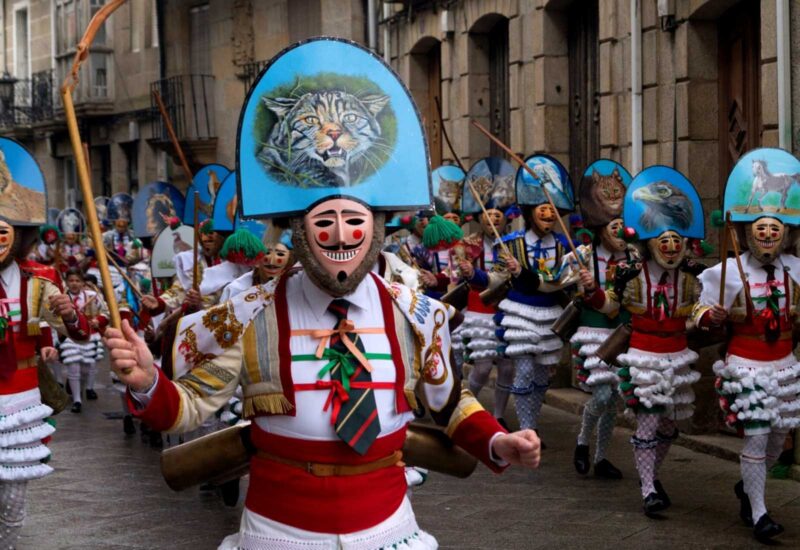 A subversive, satirical and cathartic party

With the above elements in common, each entroido is unique, with its typical characters and costumes. The entroido, also called in different parts of Galicia as antroido, entroiro, entruido or entrudio, has varied characters that enrich the party. For example, the pantallas of Xinzo de Limia can throw flour at you at any time, the cigarrón of Verín can whip you with his whip, as well as the peliqueiro of Laza, which is also forbidden to touch. Others, such as the mázcaras and folións of Manzaneda, Vilariño de Conso or Viana, as well as the felos of Maceda, usually roam the streets of the town and enter the houses to be invited to eat and drink. 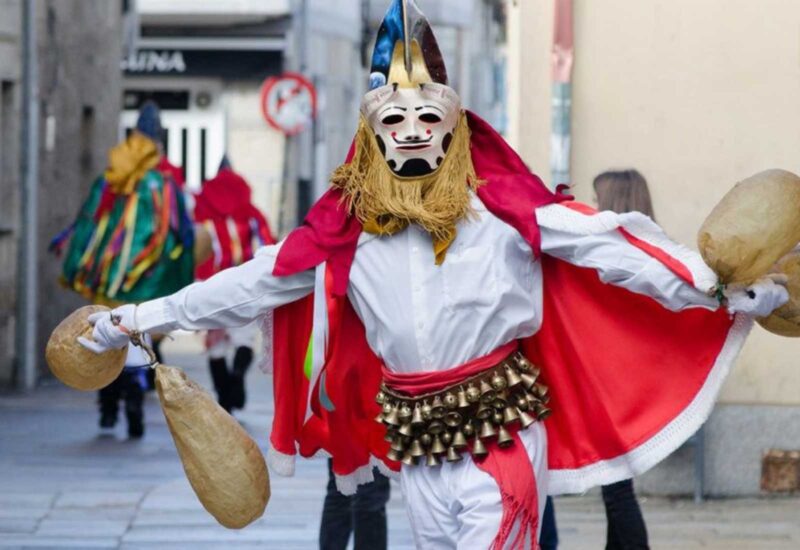 There are many more, but we must not forget the meco, a character made of rag that is hung during the festivities and is burned at the end. It represents evil, sins, and even serves as a figure that is sometimes related to the Church or the Public Authority and serves as a satirical denunciation.

Entroidos in the Camino de Santiago

Whoever walks the Camino de Santiago in Galicia during the entroido season can enjoy a millenary tradition with a lot of magic and a certain dose of “danger” that only seeks the healthy amusement of the celebrants. You can enjoy it all over Galicia, since in the cities and towns there are parades, passacaglias and so on.

But if what you want is to experience the traditional entroido, through the Camino de Santiago Sanabrés you will pass through Laza and other towns in Ourense and you can discover this festival. Through the Camino de Santiago de Invierno you will pass through Lalín, where the Feria del Cocido is also celebrated, a Festival of International Tourist Interest that presents the best stew of Galicia, the star dish of the entroido. 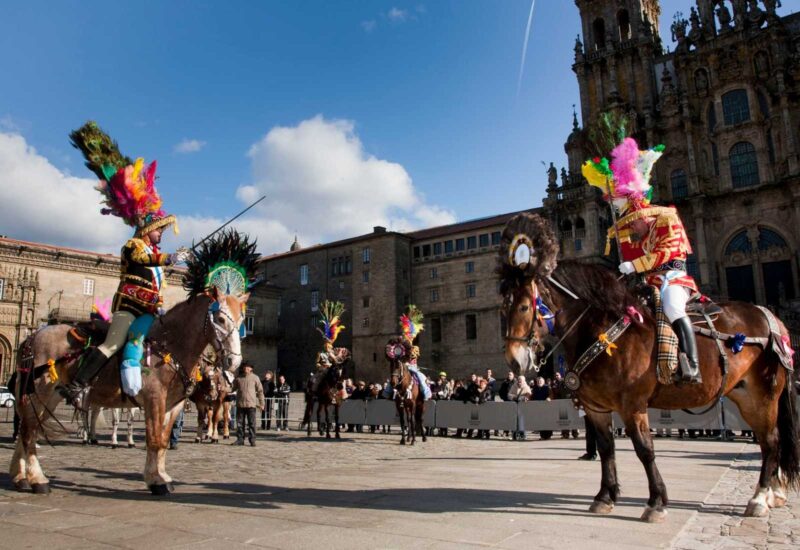 A good plan to get to know this year’s Galician entroido is to dress up as a pilgrim and come to the Camino de Santiago, and thus enjoy two unique experiences with all the magic of the Jacobean routes and Galicia.