Origin and meaning of the yellow arrow

Why a yellow arrow? In the 60s and 80s the Camino de Santiago was practically extinct, proof of this is that in 1978 only 13 pilgrims arrived in Santiago. The numerous routes of the Camino de Santiago at that time were, in many sections, impassable and the original route was not delimited and was confusing for the pilgrims. It was then that the figure of the parish priest of O Cebreiro, don Elías Valiña Sampedro, who studied throughout his life the history of the Camino de Santiago and was the great architect of its recovery.

In 1984, after studying the original route of the French Way, the French Way decided to completely mark the route from Roncesvalles to Santiago de Compostela.

To carry out this task, Elías approached a public works company in Pedrafita do Cebreiro to ask them for the leftover paint that was used to mark the roads. paint that was used to signpost the roads. And what color was this paint? Yellow! This is the birth of the famous symbol, a simple, unpretentious brand whose sponsor was solidarity and love for the Camino de Santiago.

It is worth telling an anecdote anecdote in the life of Don Elias.

While marking the Camino in Roncesvalles the parish priest was surprised by the Guardia Civil, who stopped him thinking that he was marking a path for terrorists. They asked him, “What are you making these arrows for? And he answered, “I’m preparing an invasion! 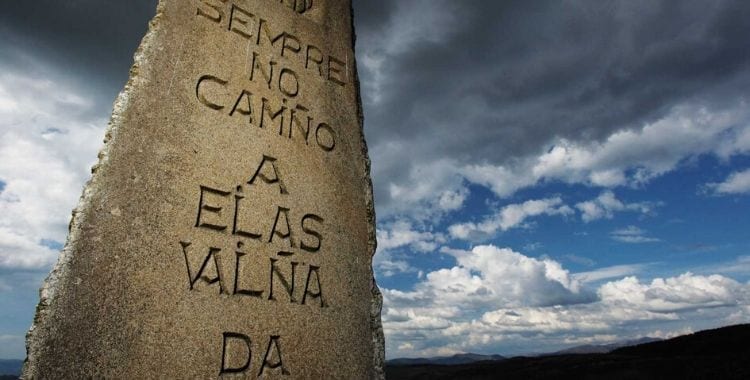 Devotion to the Camino de Santiago

His devotion to the Camino was so great that he continued to work along the same lines until the last days of his life.He was making a complete cartography of the Jacobean route. A work made to scale in which the two ways of penetration of the Camino de Santiago in Spain were specified and information was provided on the alternative routes that, in times like winter, were more advisable.

Elías Valiña died in 1989 at the age of 60. His tomb can be visited in the basilica of Santa María la Real de O Cebreiro. Outside the church there is a small space next to the bell tower where a monument has been installed in honour of the great modern promoter of the Jacobean Route.