The Way to Santiago “The Origin”: The Barbanza and Sar Way

As the saying goes, “all roads lead to Rome”, and also to Santiago de Compostela, as there are as many roads as there are pilgrims. In addition to the official roads that we already know, a little known route takes us to the origin of the Jacobean history, the Camino del Barbanza, which navigating and bordering the Arousa estuary, where it is believed that the boat with the remains of the Apostle arrived, recovers this episode as well as a path with documentary and historical justification.

Association of Friends of the Way of Saint James of Barbanza and Sar “El Origen”.

Since its birth in 2017, the Association Friends of the Way of Saint James of Barbanza and Sar “El Origen” has been promoting a new Jacobean route, the Way to Santiago “El Origen“, which runs along the Barbanza peninsula. The main objective is to identify, recover and improve the old Way of St. James through the region of O Barbanza, crossing the municipalities of Ribeira, Pobra do Caramiñal, Boiro, Rianxo, Dodro and Padrón, where it would join with the Portuguese Way of St. James to reach Santiago de Compostela.

The president of this association, José Manuel Mariño Nin, closely related to the Jacobean culture for 21 years attending in the hostel of Monte do Gozo and in the Pilgrim’s Assistance Office of Santiago de Compostela, remembers that the Codex Calixtinus mentions the arrival of the Apostle’s remains to Iria Flavia by sea.

“Geographically we are at the origin of the Camino and there is no other entrance by sea that does not pass through our coast,” he says with conviction.

There is evidence, such as the existence of several hospitals, heraldic elements, images of Santiago and more than 200 landmarks related to the Jacobean tradition such as churches, convents, crosses, etc., which show the existence of an ancient medieval Pilgrim’s Way to Santiago parallel to the maritime route of the Traslatio. 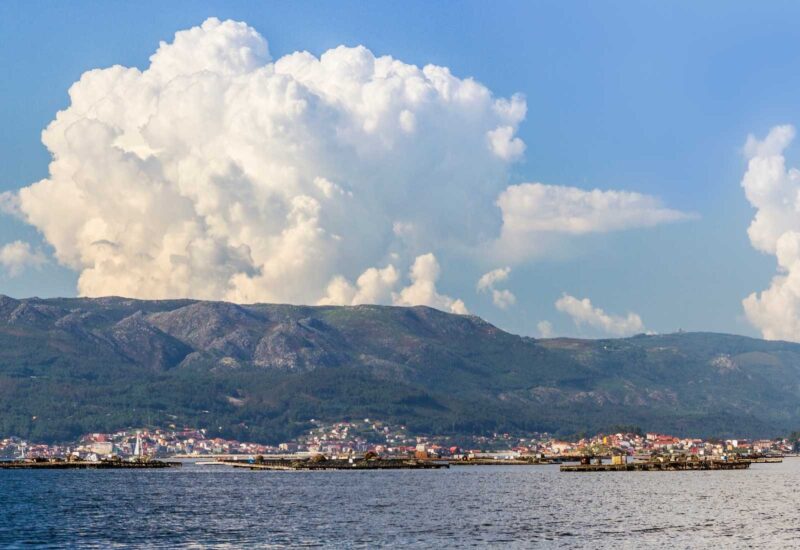 Thus, in parallel with the navigation of the Arousa estuary, its association, together with the Association of Municipalities Barbanza Arousa, has promoted and developed a route that already has the approval of the Church, and that will even allow to obtain the Compostela.

With boots on and a full backpack

So this is how we set out on this new path. It is 114 kilometres divided into six stages between the lighthouse of Corrubedo (Ribeira) to Padrón, where the remaining kilometres to Santiago de Compostela should be added, this last stage being common to all versions of the Portuguese Way. The stages would be:

Crossing rural areas and villages such as Pobra do Caramiñal, Boiro and Rianxo, you will always have services at your disposal. Besides, the route is already perfectly signposted, and there are information points located in Corrubedo (Ribeira), Carreira (Ribeira), A Pobra do Caramiñal, Cespón (Boiro), Quintáns (Rianxo) and A Bacariza (Rianxo). In the Wikiloc account of the mancomunidade Barbanza Arousa you can consult all the tracks, but we, who have already done it, guarantee you that it is a very special way, because you always have the sea on your right. Let’s look at the stages in detail.

We start this route and this stage of 16 kilometres at the foot of the Corrubedo Lighthouse in a wild environment and rough sea that breaks violently against the rocks. We will pass through the fishing village of Corrubedo and then by the Lagoa de Vixán, whose views will captivate us. We will finish the stage in the chapel of A Guía, closely linked to seafaring traditions. 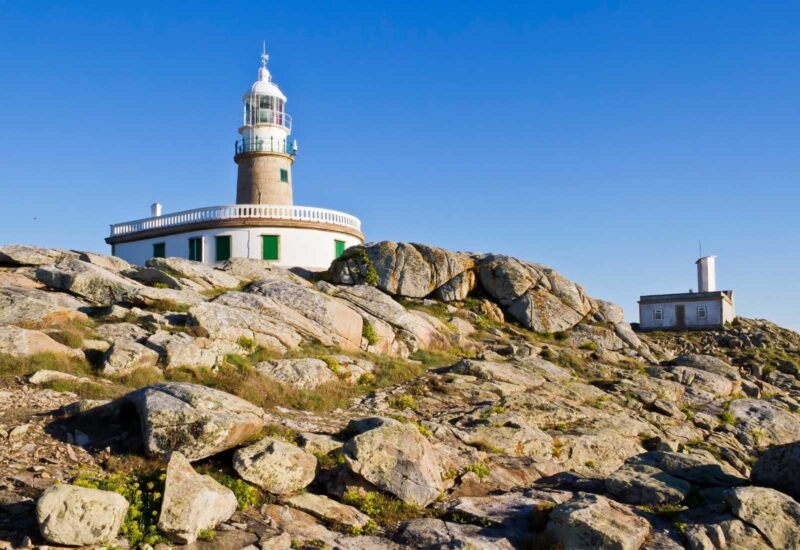 Stage 2: A Guía – A Pobra do Caramiñal

The second stage through the origin of the Jacobean tradition takes us through 24 kilometers to enjoy a journey scented with saltpetre and sea breeze. We will enjoy the unique landscapes of the Arousa estuary by the sea, where the route is captivating and light, without big climbs. In A Pobra do Caramiñal we can rest and immerse ourselves in its picturesque streets.

We continue our adventure in this third stage, the longest with its 32 kilometres, and we leave behind the welcoming Pobra do Caramiñal to merge with the seafaring life of Escarabote or Cabo de Cruz; we recommend you to stop and admire the seafaring work of its people. Further on, in the castros of Neixón, we will be able to savour the landscape of the sea dotted with the rafts of the Arousa estuary. We finish in Cespón where the oldest church in Boiro is witness to the passing of the centuries. 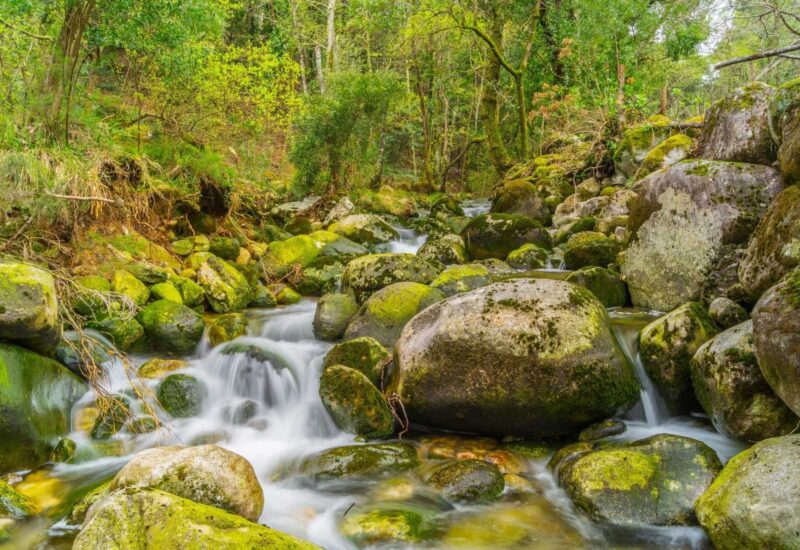 There are 26 kilometres of stage where we can visit the Hermitage of San Ramón de Bealo, patron saint of midwives. We will cross paths perfumed with green, whose nature will offer us beautiful panoramic views. In Rianxo, cradle of the Galician culture, we will know the legends of Castelo da Lúa or the mystery of the cursed village of Abuín. Following the coastline we will find the Three Crosses cruise, the only maritime Way of the Cross in the world. We arrive at Quintáns, where we can rest.

In this stage of 16 kilometers we will enjoy a peaceful and restful day with little mileage, on the eve of our triumphant arrival in Santiago de Compostela. A lot of cultural heritage awaits us, always parallel to the river Ulla to reach the river Sar, which announces the arrival to Padrón. 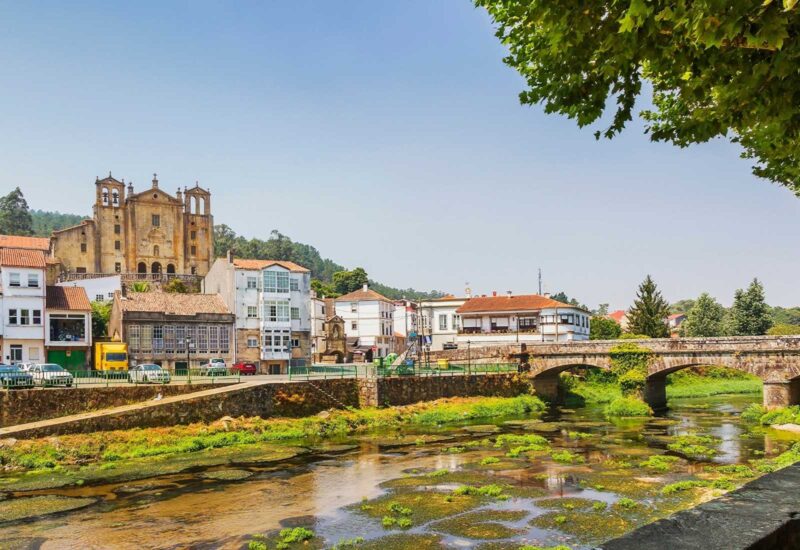 Last day, and a great day between two Jacobean enclaves without equal, as Padrón and Santiago de Compostela. You will be accompanied by the pilgrims of the Portuguese Way of St. James, in a stage of 24 kilometers where the excitement of reaching the Obradoiro square will be your best fuel.

“We have potential and we have justification. The Way that we project is as or more legitimate than any other that has been made official, the boat with Santiago passed through our coasts”.

This way Mariño defends this way, who in addition is already thinking about opening a Center of Welcome to the Pilgrim in A Pobra do Caramiñal, and assures that already there are individuals with intention of opening shelters.

So it is, dear pilgrim friend. If you have already done all the ways, now you have the opportunity to enjoy another very interesting one, full of landscape, sea, gastronomy, culture and history: the Way to Santiago “El Origen” offers you all the best of the region of Barbanza and the Jacobean culture.

Shall we walk the Origin?