Doing the Camino de Santiago is a very complete experience, it offers you hiking, culture, history, gastronomy and, why not, very good wines. In fact, on this millenary pilgrimage route you will cross several territories with a great wine tradition and culture, various areas of vineyards and even a fountain that emanates wine. The culture of wine and the Camino de Santiago are closely linked, as the medieval pilgrims relied more on wine, which they often carried in their gourds, than on the river water itself, as they did not know how drinkable it was. If you are passionate about wine and want to know more, keep reading, because we will show you the paths that will offer you the most important designations of origin of the peninsula.

Wines of the French Way

The French Way, on entering Spain through Roncesvalles, awaits us with a glass of good wine. The Autonomous Communities of Navarra and La Rioja are famous for their good red and rosé wines, perhaps the best in Spain and of great worldwide fame. The Rioja Designation of Origin was the first in Spain to receive the Qualified Designation of Origin in 1991, and it is an area with a great winemaking tradition, with a dedication of more than 2000 years.

There are three sub-zones, Rioja Oriental, Rioja Alavesa and Rioja Alta, located on the banks of the river Ebro, where more than 1000 wines are produced, the favourite red varieties being Tempranillo and Garnacha. The tradition is so strong that even in the town of Ayegui, pilgrims are offered free wine at the fountain. Fountain of Wine at the Irache Wineries this custom has survived since the Middle Ages, when the monks offered wine to pilgrims for its restorative properties. 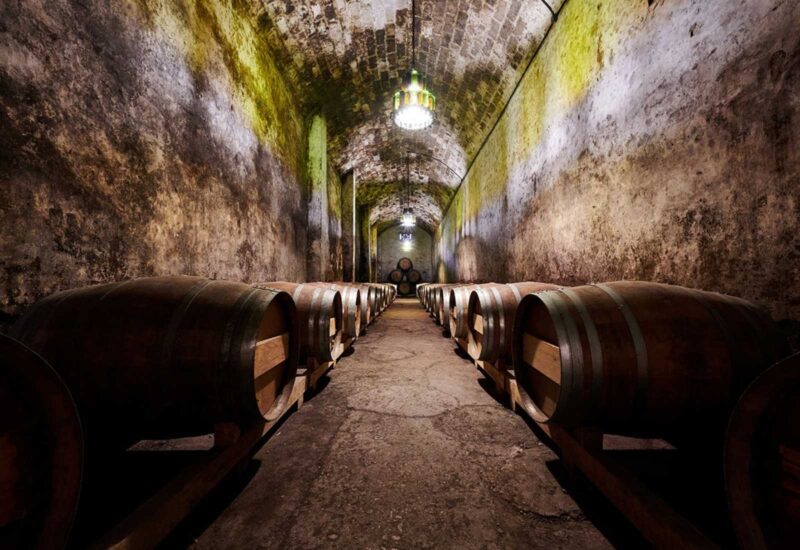 Later, already in the Autonomous Community of Castilla y León, the protagonist role passes to the Denomination of Origin Ribera del Duero. The vineyards on the banks of the Duero River offer a product that envies nothing to Rioja wine, and it is also a highly valued wine internationally. Many red grape varieties are grown, the main one being Tempranillo, also known as Tinta del País or Tinto Fino. As a white grape variety, the Albillo Mayor stands out.

They say that Castilla is wide, and its oenological offer expands when we get to the province of León, in whose lands we find the Denomination of Origin Bierzo. The region of El Bierzo, bordering Galicia. The most important grape variety is the red grape Mencía, being very valued also the white grape variety Godello.

Wines of the Portuguese Way

The Portuguese route to Santiago de Compostela offers a wide range of wines of great value, both in Portugal and in Spain. Although there are red and white wines, in this case the latter are especially famous.

In Oporto, on the banks of the Douro River, the wine tradition is known worldwide, and in fact it holds the Porto Denomination of Origin and the Douro Denomination of Origin. If you order the first one you should know that it is a fortified wine with brandy added before the fermentation process is finished. The vine is grown in Alto Douro, near Oporto, but it is specifically in front of this city, on the south bank of the Douro River, the ideal place to savour it: in Vila Nova de Gaia you can visit the cellars where this historic wine was stored for export. Its consumption and production is closely linked to Great Britain, where it has been very popular since the 18th century. 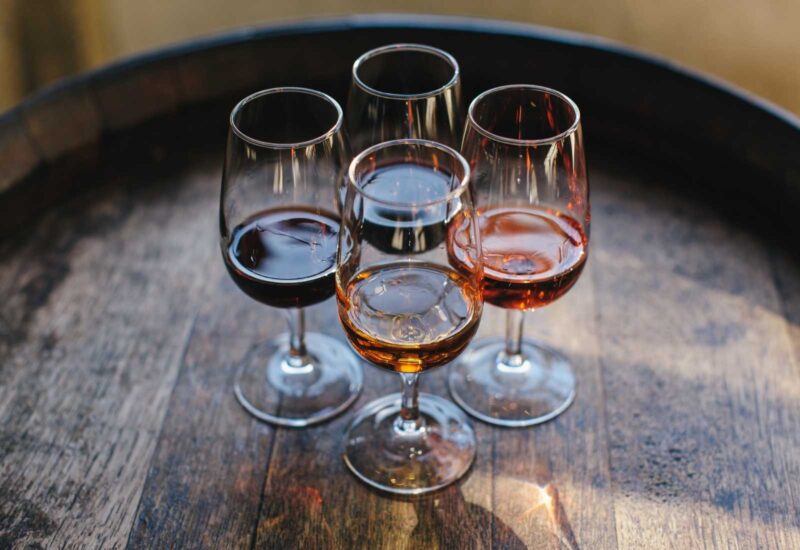 We continue heading north towards Santiago de Compostela and between the rivers Douro and Minho we will cross the Portuguese region where the green wine is produced, also with its Vinho Verde Denomination of Origin. It is a wine that is often slightly sparkling, and is called green because the grapes are harvested very young, without having matured much. The white grape variety albariño stands out, although we can also find red varieties. After port wine, green wine is the second most exported wine in Portugal.

Already in Spain we find the region of O Rosal, in the south of the province of Pontevedra, with its wine that is part of the Designation of Origin Rías Baixas. The valley of O Rosal is on the northern bank of the river Miño, and extends from Tui to the river’s mouth in A Guarda. The main grape variety is the white albariño grape, and every third weekend of July its fair is celebrated, where you can taste this little known wine.

Still in the province of Pontevedra we find the well-known albariño wine, which like the previous one also forms part of the Designation of Origin Rías Baixas. Highly valued by all palates, it is made with 100% white grape variety albariño. It is the protagonist of any Galician table, perfect with octopus, fish and seafood.

Wines of the Winter Road

The city of Ponferrada is the birthplace of the Winter Way as an alternative to the passage of the French Way through the snowy mountains of the Ancares in winter. In addition to having in common with the French route the wines of Bierzo, this route runs through the region of Valdeorras, where you can taste the wines of the region, the designation of Origin Valdeorras. The main varieties are the red grape mencía and the white grape godello. 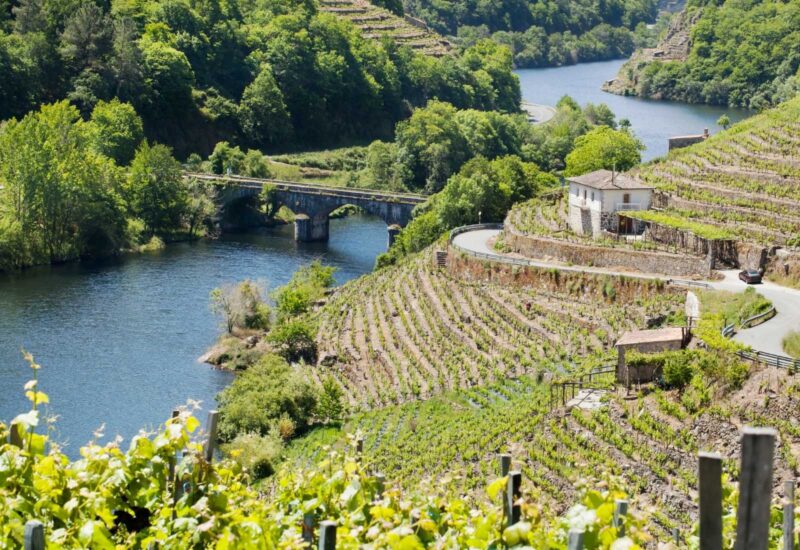 A little further on we find the region of Ribeira Sacra, with a great historical and natural heritage, as well as oenological, because in it you will find the Denomination of Origin Ribeira Sacra a highly valued wine in Galicia. The preferred grape varieties are the red mencía and the white godello, which are born on the banks of the rivers Miño and Sil. Its vineyards are especially remarkable, as they are terraced on the banks of the river Sil.

Coming by the Silver Route coming from the South of Spain, we arrive at the province of Zamora, where the Toro Denomination of Origin offers you elegant and powerful wines made mainly from the Tinta de Toro grape variety. 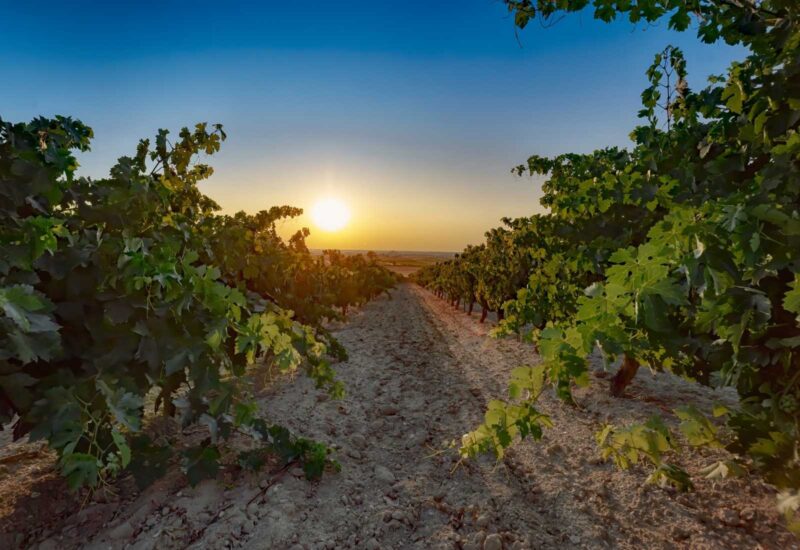 Already in Galicia, concretely in the province of Ourense, in the valley of the river Támega is located the Monterrei Designation of Origin not very well known outside Galicia. The main white grape variety is the godello grape, the red grape being the mencía grape.

After passing the thermal city of Ourense you will find the region of O Ribeiro, which means “river bank” in Galician, where you can taste its wines. The Ribeiro Designation of Origin was declared as early as 1932. This region is formed by four rivers: the Miño, Avia, Arnoia and Barbantiño, and in its banks there are many vineyards. Different grape varieties, such as the white treixadura grape or the red mencía grape, will offer you pleasant sensations.

“With ham and good wine, you can walk the road”.

So says one of the many sayings that run among the pilgrims, and as you can see, good wine is guaranteed on the Camino de Santiago. If you want to try it together, are you up for it?