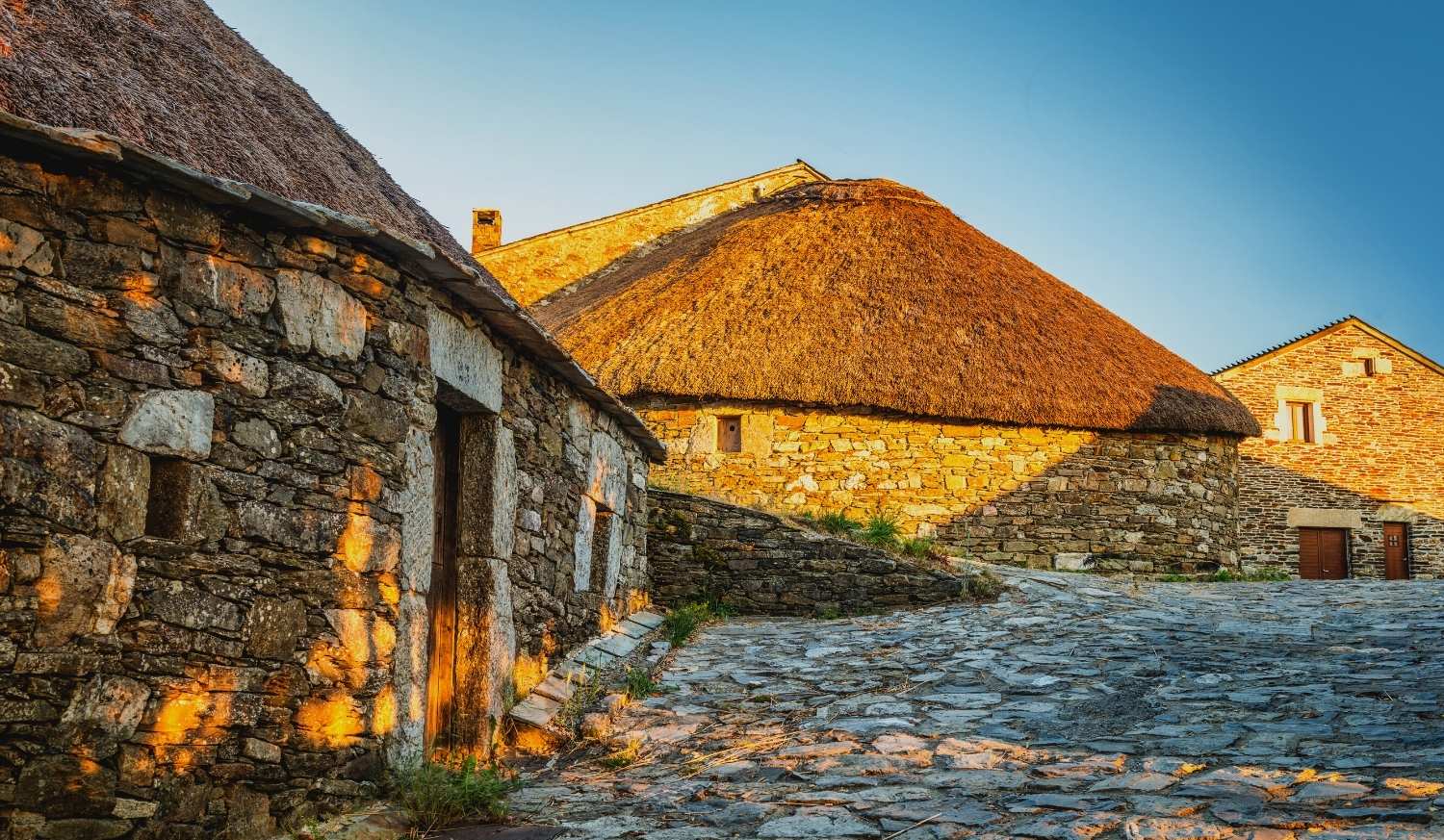 The village of O Cebreiro is located in the region of Os Ancares Lucenses, a beautiful natural area declared a Biosphere Reserve. This place is the first stop on the French Way in Galicia, and despite its small size, has all the services for the pilgrim, and is one of the  most beautiful villages on the Camino de Santiago.

As if it were a fairy tale, this small village will evoke past times, either for its cobbled streets, its traditional buildings, the Celtic atmosphere, or the spectacular views of the green mountains of Os Ancares and O Caurel. No wonder it is considered by many as one of the most beautiful villages in Galicia. So if you are thinking of visiting it, do not hesitate because we assure you that you will fall in love.

What to see and do in O Cebreiro

The pallozas are a perfect tangible testimony of what life was like in the mountains of this part of Galicia. They are formed by a very dense thatched roof, which supports the weight of heavy snowfalls and winds in winter, keeping the heat. Inside, we are overwhelmed to imagine what daily life was like. As a general rule, they were divided into a bedroom, a kitchen and a stable. Yes, theanimals lived with the family to be protected from the frost and, at the same time, their own body heat acted as heating.

It is located inside the Palloza de Xan López. It’s a highly recommended visit as it will give you the opportunity to possibility to see a real palloza inside. In it you can see the frame of the roof and other elements such as the lareira or place where the fire was made, the area where the livestock was, furniture and other objects of everyday life in the mountains of Lugo. 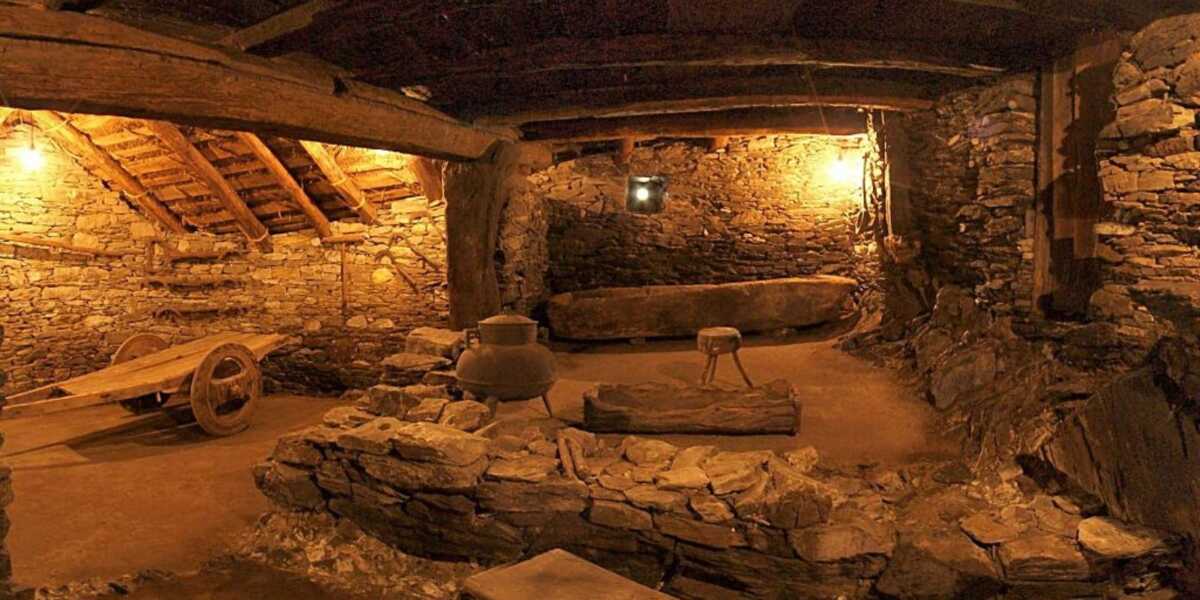 It is the main historical monument of the town. It was built in the 9th century in pre-Romanesque style. It’s the oldest church that is preserved in its entirety on the Pilgrim’s Way to Santiago de Compostela. Inside we can see an image of Santa María la Real and a baptismal font from the 12th century. The old Romanesque chalice associated with the legend of the Eucharist and a reliquary donated by the Catholic Monarchs. The place also houses the tomb of the parish priest Elías Valiña, promoter of the French Way. 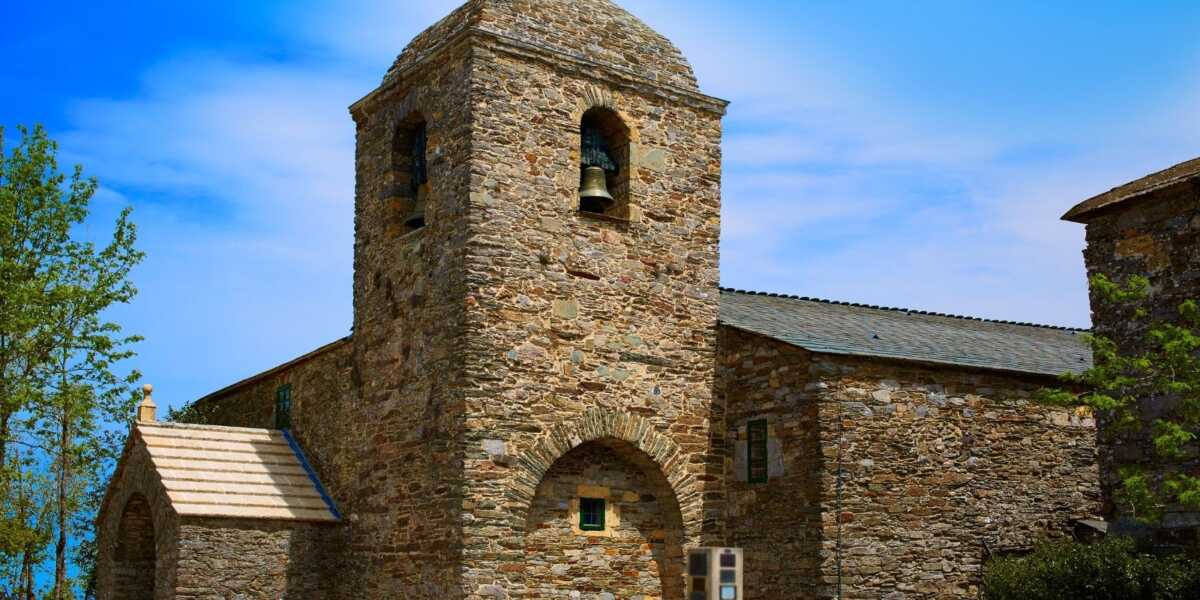 The legend of the miracle of O Cebreiro

In the year 1300 a peasant, Juan Santín, who lived in a village half a league away from the church of O Cebreiro, the village of Barxamaior, was so devout that he never stopped going to mass no matter the rain, the wind or the cold. One day a furious storm broke out and the priest of the church thought that none of the faithful would come. When John alone came in, he mocked him and exclaimed, “What comes this other with a great storm and so weary to see a little bread and wine!“and said that his presence “was not worth the trouble”. God, then, to punish the priest’s lack of faith and charity, when he was consecrating the bread and wine, performed the miracle of turning the host and wine into flesh and blood.

It is also said that the two burials inside the church belong to the peasant and the friar, and that the image of the Virgin turned her head to one side to contemplate the miracle.

One of the legends of the Camino that the German pilgrims spread. As a curiosity, since then the chalice has been part of Lugo’s coat of arms. 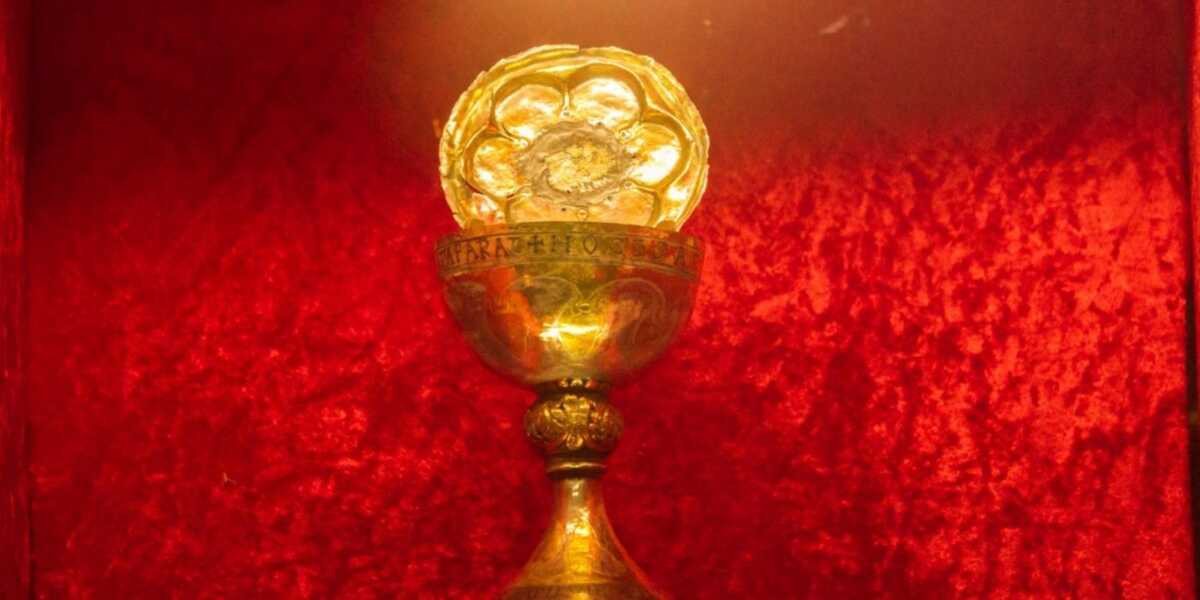 The cheese of O Cebreiro

But if there is something to like about O Cebreiro, it is undoubtedly its cheese with Protected Designation of Origin. It is a fresh cheese, soft and grainy paste, with a slightly sour taste that has conquered the most famous chefs in the world.

In addition to its extraordinary flavour, its peculiar mushroom or chef’s hat shape is striking. This is because, in the past, the cheese was pressed by placing a stone on top of the curd. Today, although this technique is no longer used, it still retains its characteristic shape. 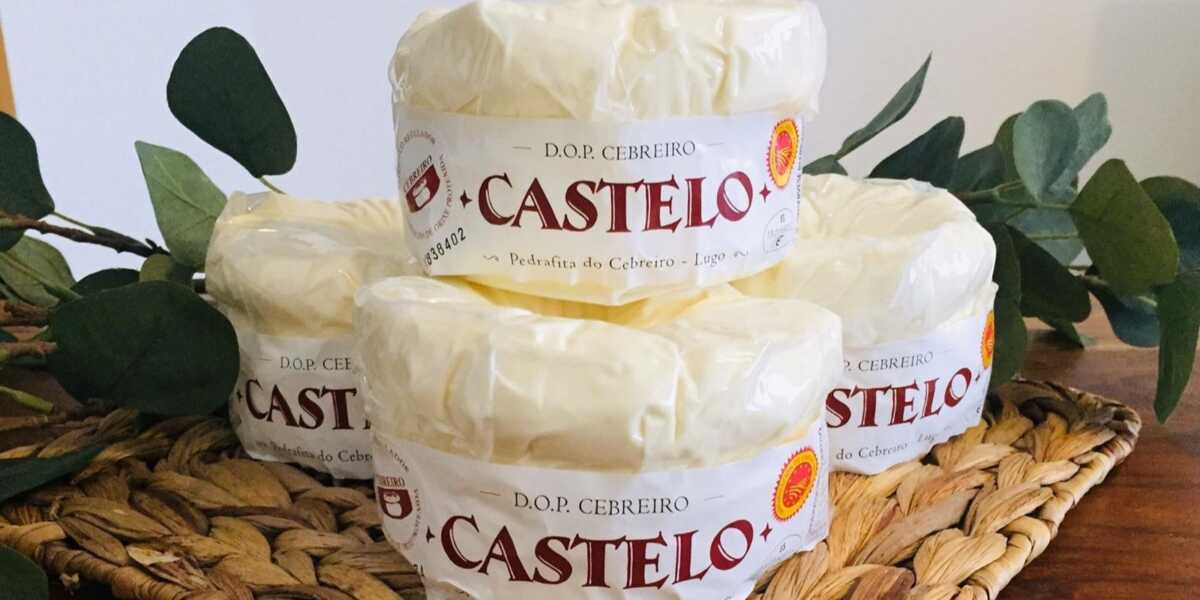 The sculpture of the pilgrim woman

In the viewpoint that we find at the beginning of the village, we can see a bronze sculpture representing a woman resting with her back to the mountains of Leon. It would be just another pilgrim statue were it not for the fact that it is the first one represented by a woman.

The sculpture was made by Miguel Couto and was installed in O Cebreiro in 2018, with the intention of making more sculptures and placing them along the entire route of the French Way. 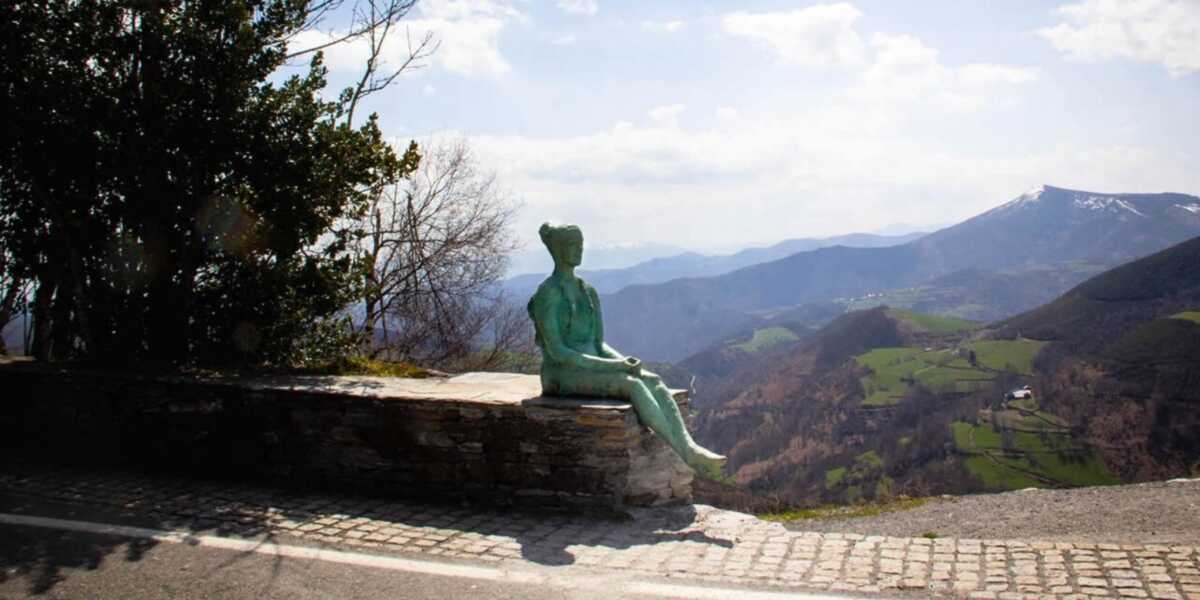 The Hórreo of O Cebreiro

You cannot leave O Cebreiro without visiting its mythical hórreo, nowadays reconverted into a shop where they also sell drinks. It is located very close to the statue of the pilgrim.

The hórreos in this part of Galicia have a different typology to the rest of the community. They have a square floor plan and a thatched roof similar to that of the pallozas, and are elevated on four feet to prevent animals from gaining access. Its function was very important for the families as it allowed them to store the crops and the by-products of the slaughter. They are still used today with the same function. 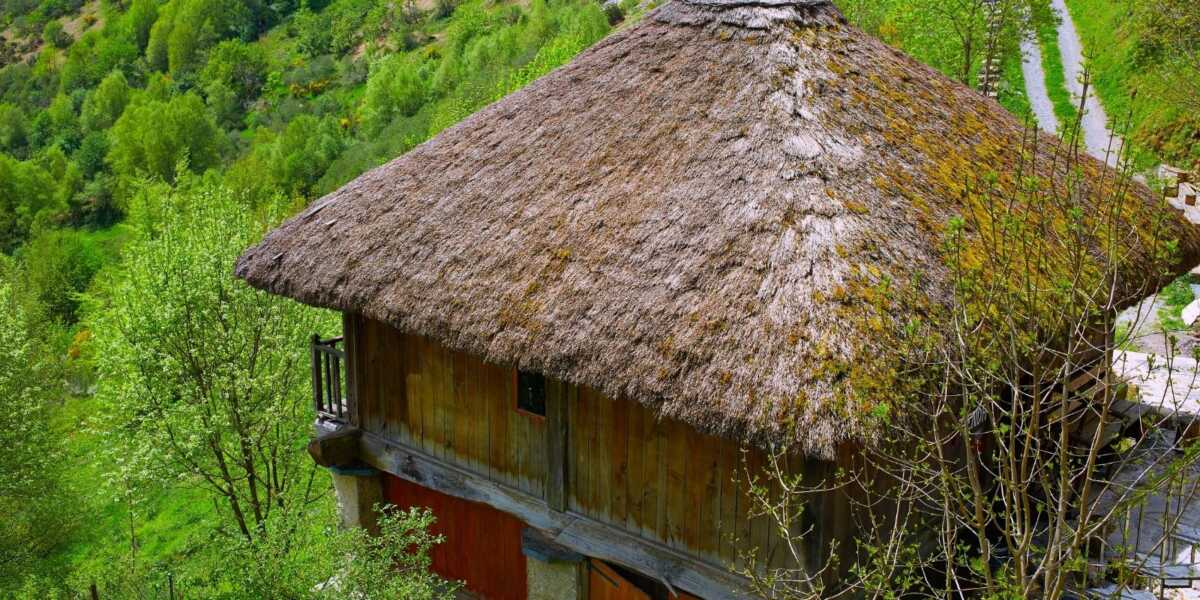 A few kilometres from O Cebreiro and in the middle of the itinerary of the stage O Cebreiro – Triacastela, we find the Alto de San Roque, at an altitude of 1,270 metres. Here we find another imposing sculpture, the Monument to the Pilgrim, one of the most emblematic of the entire French Way. The image, created by José María Acuña, represents a pilgrim from the Middle Ages fighting against the inclemency of the weather. 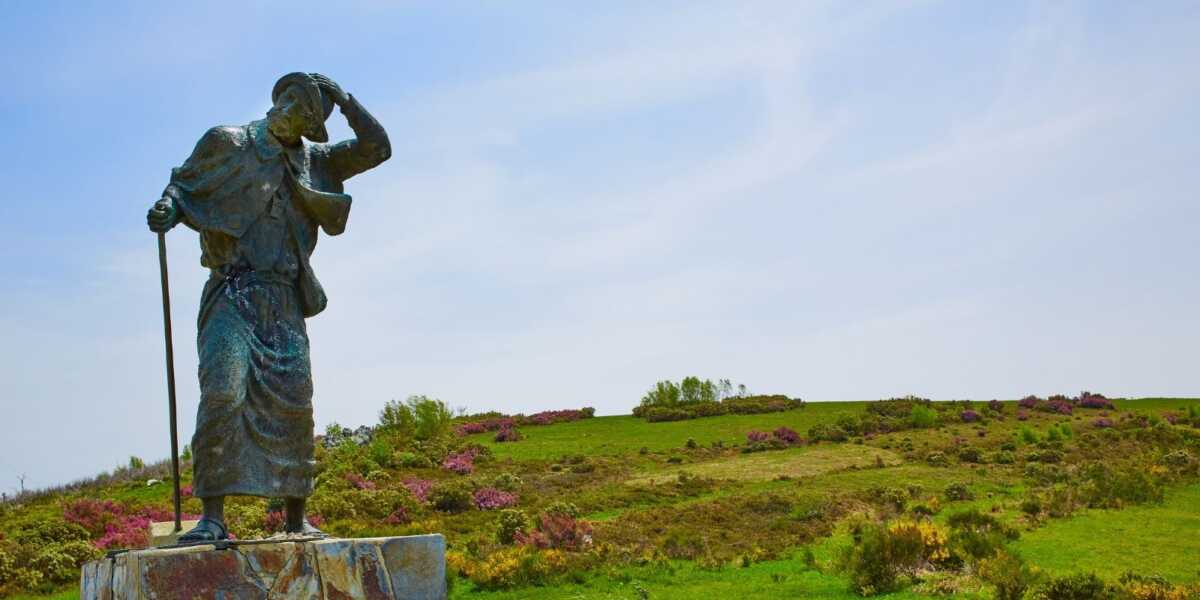 In addition to all of the above, the village of O Cebreiro is also famous for its snow. Due to its altitude, it is one of the points of the community where it snows more frequently. For this reason people from all over Galicia come to the village to enjoy a fun family day, playing with the sleds and making snowmen. The truth is that if the village is already magical, seeing it snowed is a real pleasure for the senses. 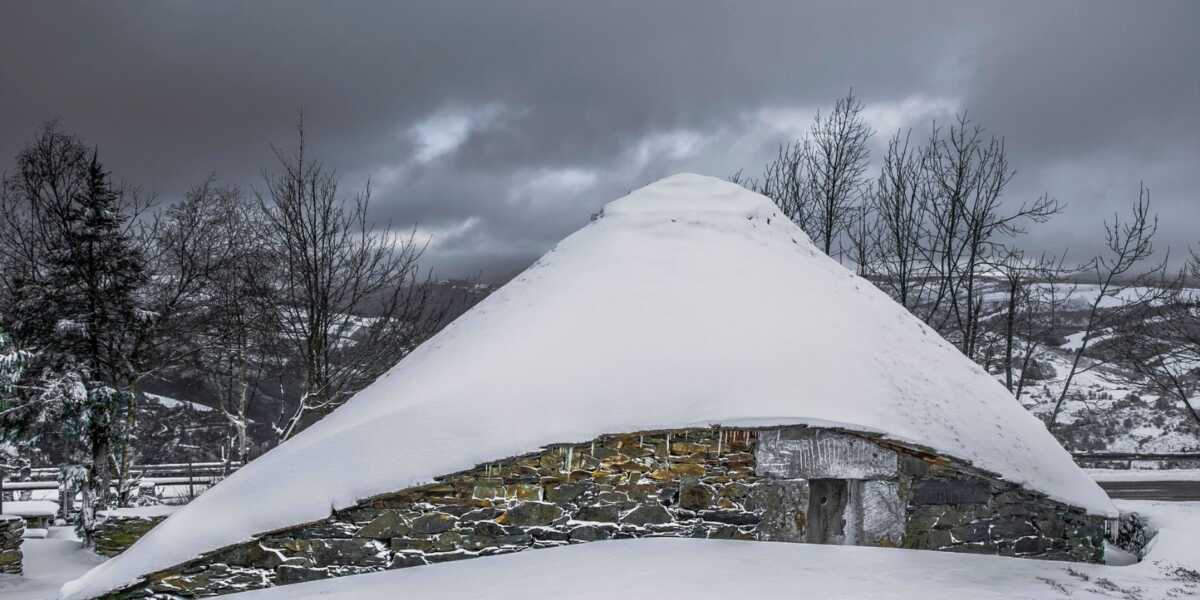