Segovia – What to see and do in Segovia?

Segovia, Spanish city and municipality belonging to Castilla y León, one of its jewels. It is part of the trio of capitals of this region declared World Heritage together with Avila and Salamanca.

It is located between the Eresma and Clamores riverbeds, on high ground. Due to its historic centre and its Aqueduct, it has become part of the World Heritage . This city has its own personality given by the weight of its history and its valuable Roman and medieval legacy. In addition, a multitude of Romanesque churches, the Cathedral and Alcázar make up an incredible landscape that stands out in these Castilian lands.

Millenary city, with evidence of Neanderthal occupation 60,000 years ago. Both Segovia capital and its province have an endless number of charms. Segovia is also an excellent starting point to visit the province and visit the palace of La Granja or the Natural Park of Hoces del Río Duratón, among other options.

Undoubtedly the attractions of this corner of Castile are enough for several days, but if we lack of time we will surely return to continue discovering every corner that hides this wonderful city.

What to see in Segovia?

If you have decided to visit this city and you have no idea what you can see besides its famous aqueduct, we will show you what you can’t miss in Segovia. Discover why it has earned the title of World Heritage City, walk its streets and immerse yourself in its history.

The Aqueduct of Segovia

It is a Roman aqueduct that carried water to the Spanish city of Segovia. Its construction dates back to the beginning of the 2nd century AD. C., at the end of the reign of the emperor Trajan or at the beginning of Hadrian’s reign.

It is situated on the banks of the river Eresma, and dates back to the time of the Iberians who used it as a military post with the mission of controlling access to the valley of the Duero. The construction of the aqueduct was a majestic work that has gradually adapted to the terrain and nature. 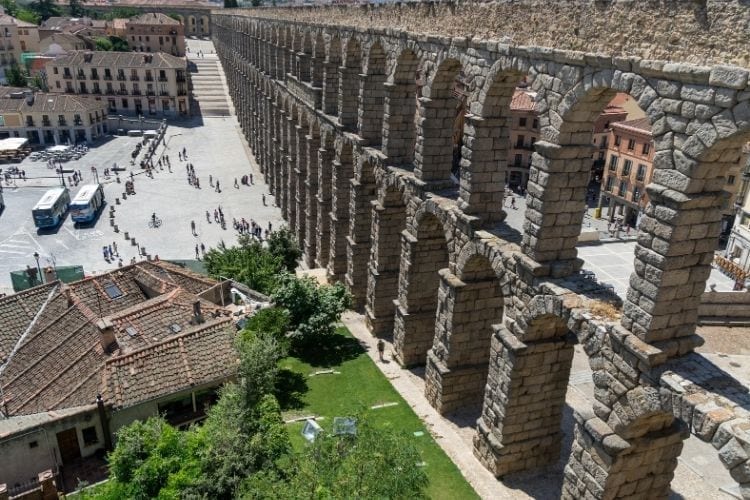 In ancient times it was the Market Square, hence its name from the term ‘quicksilver’ which is strictly linked to the term ‘souk’ (place of trade and meeting). It is located at the foot of the aqueduct, in the highest part. A meeting place not only for Segovians but also for the inhabitants of other towns. It is usually the starting point for a visit to this wonderful city. 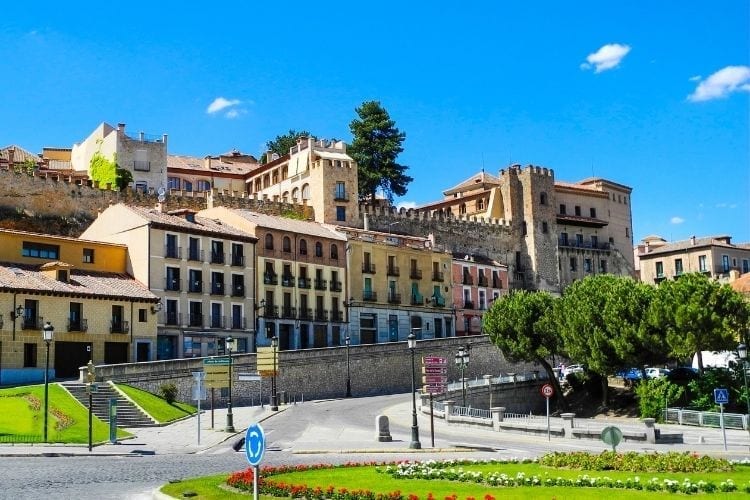 House of the Picos

This house was built in the 15th century, and the most striking feature of this building is the facade completely covered with peaks. It was built in this way in order to avoid the Jewish style of the time. Its facade contains 360 granite peaks and according to one of the legends that are told, under one of these peaks is a treasure. Inside this house we can find a Renaissance style courtyard. The details and decoration are based on Talavera tiles that recreate the most significant monuments of Segovia. 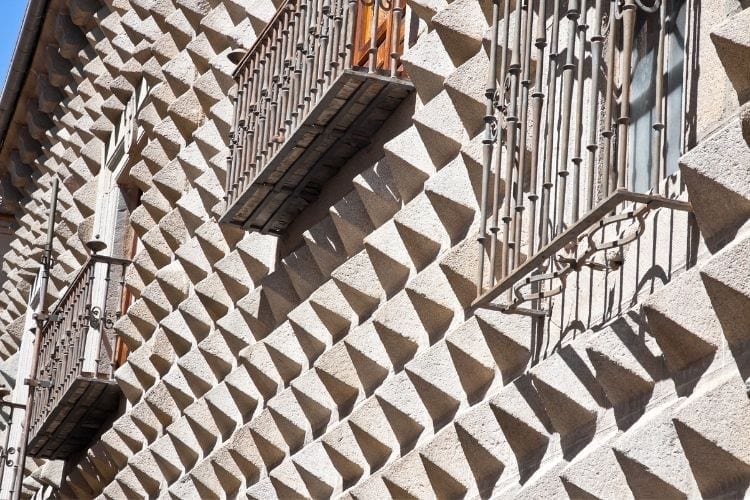 It was a district of the city of Segovia inhabited by the Hebrew community at least from the 12th century until their expulsion by the Edict of Granada promulgated by the Catholic Monarchs in 1492. At the time it was one of the richest and most populated communities in Castile.

The Alcázar of Segovia, a construction of military origin located between the rivers Eresma and Clamores. It dates from the early twelfth century, being one of the favorite residences of the kings throughout the Middle Ages. In addition to military use, it later had other uses. It has been rebuilt and modified several times over the years from a fortress to a palatial residence. Today we find a transitional style between Romanesque and Gothic with a sobriety characteristic of the Cistercian style. 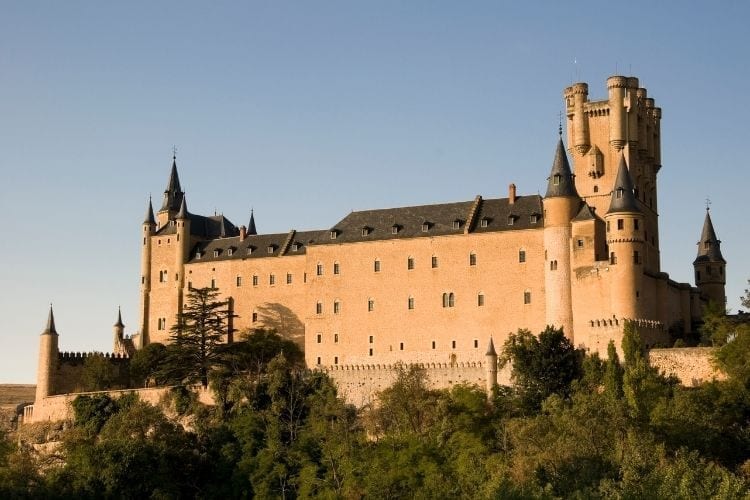 Built between the 16th and 17th centuries in Gothic style with Renaissance overtones. It is considered one of the latest in Spain, erected in the 16th century. It is known as the Lady of the Cathedrals because of its size and elegance. The cathedral began to be built in 1525, under the reign of Charles V, it was built after the old cathedral was destroyed by fire during the war of the communities in 1520.

Depending on the time you have available and your desire to discover the city, you can plan your visits to the most important places. We always recommend to go to the tourist office to get information about everything we can visit. In this article we have shown you some of them, but as a World Heritage City, it contains countless monuments that make a journey through the history of Segovia, such as the ancient synagogue, the Plaza de las Sirenas, the Wall, the Mirador del Valle de Clamores, etc.. 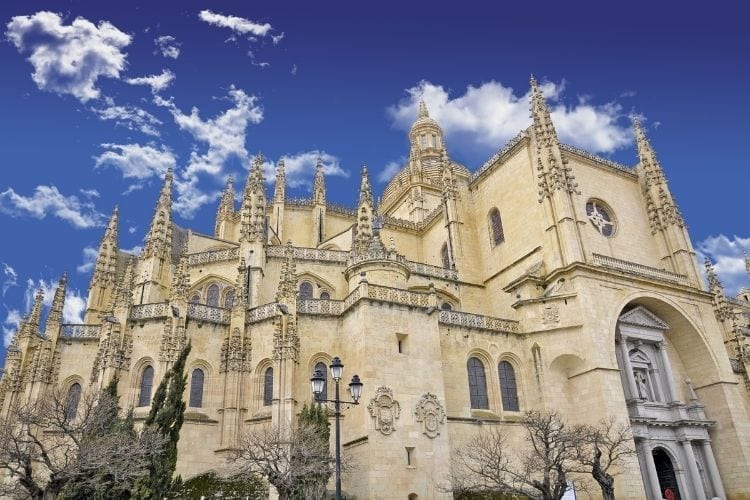 After a long day visiting the main points of interest in Segovia, we can’t leave there with an empty stomach, especially in a city that stands out for its traditional gastronomy. Talking about Segovia necessarily implies talking about its tradition of wood-fired oven roasts. The dish par excellence in Segovian gastronomy is, without a doubt, the suckling pig, an animal that is only a few days old, baked with lard, oil, lemon, salt and a little bit of parsley. The second star dish in this city is the judiones de La Granja, large black or white beans.

In the menus of the Segovian restaurants not everything is meat, the river trouts are also part of it, one of the autochthonous products. Although we have to say that we cannot forget other very habitual dishes of these lands like the Castilian soup, the stews of hunting or the lamb stew to the shepherdess.

To finish, we can taste a Segovian punch, a kind of cake with a creamy interior. Also in Segovia we can find other sweets, such as amarguillos, blind, Easter doughnuts, pine nut buns and a great variety of confectionery products.

Here are some of the restaurants where you can taste these delicacies.

Mesón de Cándido is located in the Plaza del Azoguejo, at the foot of the aqueduct. One of the highest rated restaurants and perhaps the one that summarizes in its menu all the gastronomy of Segovia. Tradition preserved despite the passage of time.

Mesón José María, located in Cronista Street, is one of the most renowned. Here we will be able to enjoy products of the zone, specially the fish since it offers great variety in its menu.

Casa Duque, one of the most prestigious restaurants in the city in which, as in Mesón Cándido, offers us the traditional local gastronomy.

Different factors such as its location, climate and history are the ones that will make us confirm that the gastronomy of Segovia is one of the richest in Spain. Traditional cuisine, a millenary mixture of flavours and local products, a delight for the palate.