Route through Tuscany ▷ 10 places not to be missed

When we mention Tuscany we think of those immense meadows, with lavender, green and yellow colours, vineyards and small villages where you can get lost, in short, a place to disconnect. Fancy a trip to Tuscany?

But Tuscany is much more than that. This region of Italy, one of the 20 that make up this republic, is located in central Italy and its capital is Florence, in it we will be able to enjoy the art, history, gastronomy and its peculiar geography from the beginning to the end of the trip.

For that reason, and because there is so much to see, we propose a tour of 12 places that we can not miss if we travel to Tuscany. A walk that will take us from Florence to the island of Elba, passing through Pisa, Siena or San Gimignano.

How to get to Tuscany?

The privileged location of Tuscany means that we can reach our destination by road, plane, train or boat. Obviously, the easiest way is to fly by plane and rent a car because, if we really want to get lost in Tuscany and explore its corners, the car will be our best ally.

By plane we will land at Amerigo Vespucci in Florence or Galileo Galilei in Pisa. There are many airlines that have direct flights here and from many places of our geography, besides Madrid and Barcelona, Bilbao, Malaga or Seville also offer this possibility.

By car it will take from Madrid, for example, about 22 hours making turns, so this idea is almost discarded if we do not have many days to take advantage of the visit to Tuscany, not in vain are more than 1,600 kilometers from the capital and just over 1,000 from Barcelona.

What is highly recommended is to rent a car at the airport, or bring it already rented from Spain, and take one of the three highways (A-1 Milan-Napoli; A-11 Florence-Sea; and A-12 Genoa-Livorno) that will take us through the route we have planned.

If we choose the train or the bus, we have to know that there is no possibility to travel direct from Spain. What we can do is to find out here about the different trains and buses that will take us to the places we choose on our route.

The last options are to arrive by sea, by ferry to the port of Livorno, which connects with some of the most important Spanish ports such as Barcelona or Valencia, or by cruise, whose departures are from Barcelona, Valencia and Malaga. Here we leave you a link to find the ferry or cruise that best suits your planning. 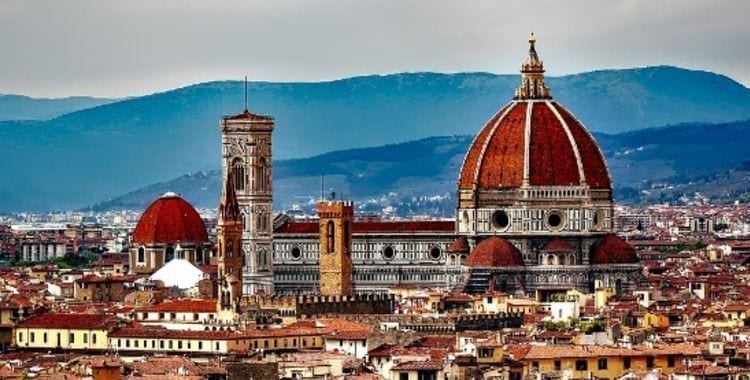 This open-air museum is the capital of Tuscany. Florence is a city that envelops you from minute one, you can breathe history, art, mystery… in each of its corners.

A visit to Piazza del Duomo is a must, where the Florentine Cathedral, Giotto’s Campanile and the Battistero di San Giovanni give us the first photo of our trip. Another visit is to Piazza della Signoria where the Palazzo Vecchio and the Loggia dei Lanzi museum await us.

Of course, we won’t miss the Ponte Vecchio, the oldest bridge still standing in Europe, which is crossed by the Arno River. There we will take the opportunity to leave a padlock as a symbol of eternal love.

The Santa Croce, the church of Santa Maria Novella, the Piazza de Michelangelo, the Medici Chapels built by Brunelleschi, or the Boboli gardens behind the Palazzo Pitti are other places not to be missed. In this garden we can rest and admire marble sculptures, an Egyptian obelisk or the fountain of Neptune. It can be visited from Monday to Sunday from 8:15 to 16:30 from February to November, from 8:15 to 19:30 in June, July and August, in March from 8:15 to 17:30 and in April, May and September until 18:30. It closes on the first and last Monday of each month and the entrance for adults costs 7 euros, for young people from 18 to 25 years old 3,50 euros and for those under 17 years old they are free.

In the Museo dell’Opera del Duomo, which in its beginnings was a workshop for the artists of the time, we will find works by Brunelleschi, Donatello (Mary Magdalene) or Michelangelo (Bandini’s Pietà), who made here his famous ‘David’ which, however, is on display in the Accademia Gallery, another must-see. 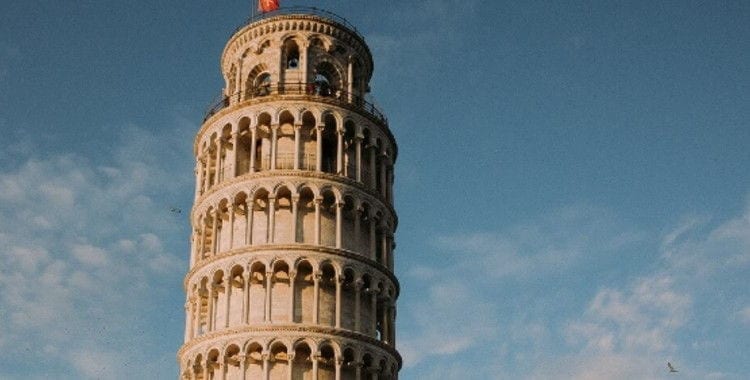 It is inevitable that when we name Pisa, the first thing that comes to mind is its famous leaning tower. Obviously, it will be the first thing we see but this city has much more to offer.

In Piazza dei Miracoli, we will find three exceptional monuments, the Leaning Tower of Pisa, not forgetting that this is the bell tower of our second stop, the Cathedral, to close with a visit to the Baptistery.

Let’s start by talking about the Tower of Pisa, a 12th century monument that, thanks to the limited expertise of its architects, became one of the most visited monuments in the world. We can not fail to make the typical photo with the tower and visit inside. The entrance fee is 18 euros, we recommend that you book in advance because on long weekends, summer and other holidays, it can take up to three hours to get in. Visiting hours are June, July and August from 8:30 am to 10 pm; in April, May and September from 9 am to 8 pm; in March from 9 am to 6 pm, in October from 9 am to 7 pm, in November and February from 9:40 am to 5:40 pm, and in December and January from 10 am to 5 pm.

The Duomo di Pisa, or the Cathedral, began its construction in 1064 and was consecrated in 1118. It houses the Museo dell’Opera del Duomo where you can see paintings, liturgical objects and sculptures.

The Battistero di Pisa or Baptistery is the largest in Italy, 55 meters high and 34 meters in diameter. Built in marble, its construction began in 1152 and was completed in 1363 and being built on the same ground as the Tower, it is also inclined. The octagonal baptismal font inside is well worth a visit.

In addition to these three jewels, we can visit the church of Santa Maria della Spina; the Ponte di Mezzo or Middle Bridge; the Museo delle Sinopie, where we will see sinopie, drawings from the Middle Ages made on parchment or paper that have survived until today; Piazza dei Cavalieri, the second most important square in the city, has as its main building the Palazzo della Corovana; and the Museo di San Matteo, where you will see works from the 12th to the 17th century and archaeological remains that make it one of the most representative museums of European medieval art.

We finish the visit knowing the Palazzo Blu or Blue Palace, in the center of the city, and the neighborhood of Santa Maria, where we can get lost in its streets and discover more of the architecture of this beautiful city, once a maritime power and today a source of culture. 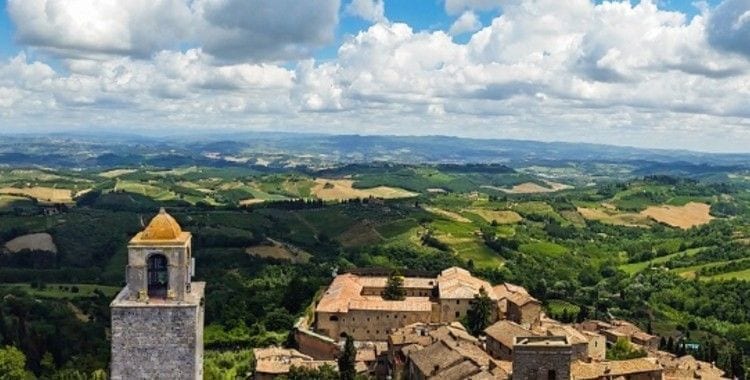 This beautiful medieval village leaves us one of the most beautiful postcards of Tuscany. The vineyards surrounding the walls with two of the thirteen towers still standing, rising above everything else, make a visit to San Gimignano take us back to another era, to more than 900 years ago, when the town was at its peak of splendour.

San Gimignano, whose visit should be done outside the ‘high’ season (summer and long weekends) to avoid overcrowding, is directly linked to its wines, so that tasting the Thegreat white Vernaccia wines of the area are not to be missed, as well as a visit to the museum dedicated to this wine.

We start the visit at Porta San Giovanni to follow the street to Piazza della Cisterna where the most important buildings of the town, which today has about 8,000 inhabitants, are located. Here we find several Palazzos, Tortoli, del Podestà, Ridolfi or Lupi, with the Devil’s tower, and the Arco dei Becci. Here we must stop at Gelateria Dondoli, the best gelateria in the world, as it has been awarded numerous times.

Nearby is the collegiate church of Santa Maria Assunta whose frescoes will surprise you. We cannot forget its towers. In its heyday it had more than 70, today there are 13 left, and it is these that give it a unique profile more typical of a 21st century city than of the Middle Ages. The Torre Grossa, the highest at 54 meters, from where we will be treated to a spectacular view, and the Torre Rognosa, the oldest, are two of the ones we will be able to see. 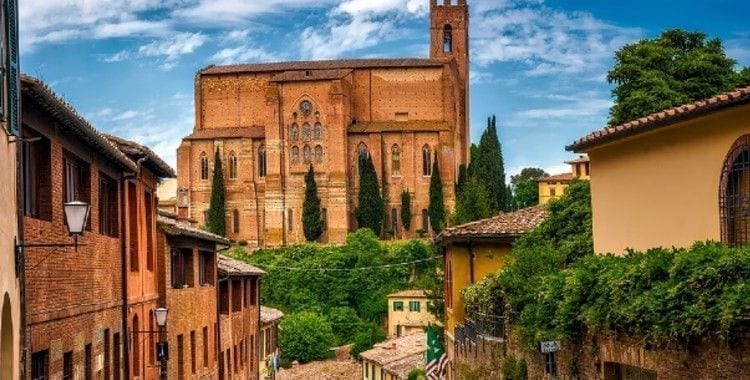 The Palio of Siena is the most famous tourist attraction of this beautiful and amazing Tuscan city. This horse race, which pits different districts of Siena against each other, is held on 2 July and 16 August in honour of the Madonna of Provenzano and the Assumption of the Virgin, respectively. But Siena is much more.

Born in Etruscan times around 900 B.C., it reached its peak in the 12th and 13th centuries thanks to the Romans. Siena is a city that captivates from the first moment. Our visit starts at the church of San Domenico, in a surprisingly sober Gothic style. We will enter via Bianchi di Sopra and via della Citta, the two main streets of Siena, where tourism, commerce