Casa “Tía Dolores”, a place for the most beer-loving pilgrims.

Beer y tortillaIt’s as simple as that. These two words have never defined a bar better, and in this article we’re going to tell you about Casa “Tía Dolores”.a bar on the French Camino de Santiago that is an essential an essential stop on the Camino de Santiago. Read on, because there is still a third element that will amaze you.

Yes, all of us who do the French Camino de Santiago long to face the penultimate standard stage of this Jacobean route, the one that connects Arzúa with Pedrouzo (O Pino), because after the first eight kilometres of the stage, when you feel like a stop and an aperitif, this gastronomic oasis appears with a lot of magic. In fact, in our groups we always advise our cheerful pilgrims to wait until they arrive at House “Tía Dolores”. to make a little stop, because we know you’ll love it. And that’s the way it always is. 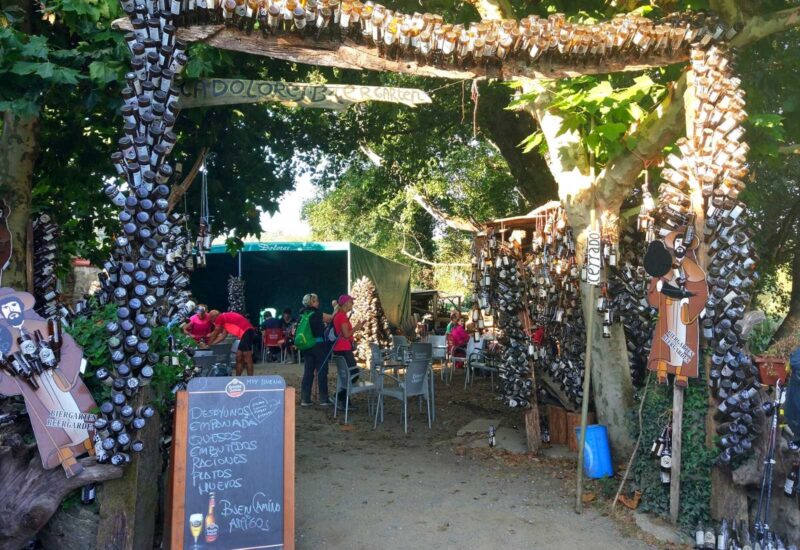 Bier garten or “beer garden” is a good definition of this place, and you will only understand it if you visit it. In the place of Outeiro and in its street Ferreiros, arriving in descent between traditional houses, we found this hotel establishment that pleasantly surprises us with its decoration.

As it turns out, practically the whole place is decorated with the bottles of beer consumed by the pilgrims when they stop at House “Tía Dolores”.from exterior walls, tree stumps and walls. And what’s more, these bottles are signed in white “tippex” type ink by the pilgrim consumer: sometimes signatures, sometimes wishes, sometimes phrases, etc. Many even put the date of their visit, and when they come back to make the On the way to Santiago it is exciting to still find that old beer cap. 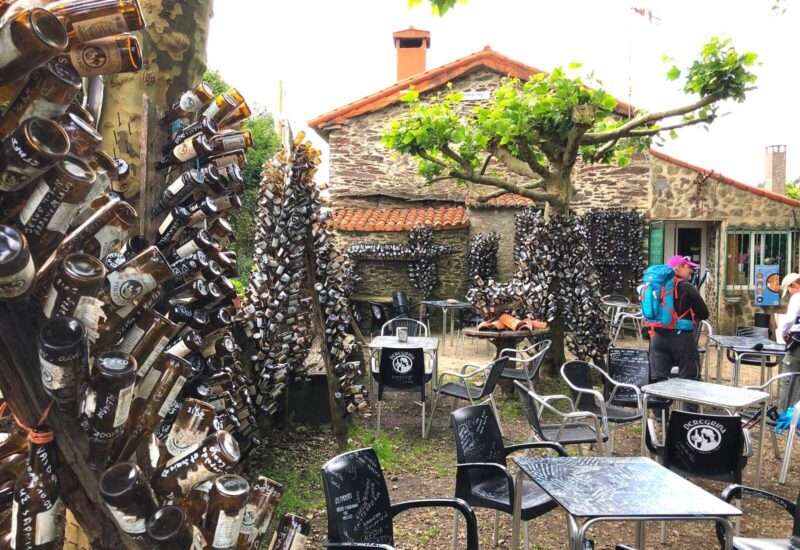 Our beloved House “Tía Dolores is run by Sotero Alvarez y María José Tomása couple of Leonese origin who have been living in Galicia for 29 years. Always dedicated to the hotel business and also pilgrims, they came to this beautiful place in May 2018, and, noticing that pilgrims were leaving empty beer on the walls, they decided to take advantage of that simple action to turn it into an attraction. With the help of some neighbors, began to build wooden structures and fill them with spikes, lots of spikes: 50,000 nails, 50,000 nails, 50,000 nails, 50,000 nails, 50,000 nails, 50,000 nails.that’s nothing. What for? This would allow everyone to the pilgrims to leave their beer helmets hanging on their heads.not without first encouraging them to to write something as a souvenir.

“There are impressive things. People have phoned us and come back here to tell us that the request they made at our Door of Forgiveness had been fulfilled. There are couples who met here and are getting married, many personal stories and memories”.

Indeed, the good Sotero, together with his neighbouring friends, decided to build a sort of replica of the Door of Forgiveness which, although it is not strictly religious, it is an attraction to be photographed or even, as Sotero tells us, to make petitions or promises. Next to it, he also erected a wooden hórreowhich of course is also lined with lined with empty beers.

The menu par excellence in this bar is like that of many others, but with the particularities we are telling you about. At first, the Curriña beerbeer, which was affected by the COVID-19 pandemic and then gave way to the Peregrina beer. Sotero hopes that, in the near future, someone will start producing a beer with the establishment’s own name.