The Miñoto Ribeiro Road. The fruit of history, wine and nature

The Camino de Santiago Miñoto Ribeiro is a route that connects the north of Portugal with the city of Santiago de Compostela. A Jacobean route still unknown to the vast majority of the pilgrim community, but which in the last two decades has been the subject of research and promotion by historians, associations and municipalities involved, both Portuguese and Spanish. We will contribute our grain of sand and in this article we will know a little more about this path, recently recognized by the Church and that allows to obtain the Compostela, merges history, nature, thermalism and wine on the way to Santiago de Compostela.

The Roman roads and commercial roads have always been present in the configuration of the different pilgrimage routes to Santiago de Compostela, as existing routes that facilitated the passage of travelers and pilgrims. In the Camino de Santiago we have examples, such as Via XIX in the Camino de Santiago Portugués or Via XVIII in the Camino da Geira and dos Arrieiros. Along this same Via XVIII, also known as Via Nova, the Miñoto Ribeiro Way shares stretches of the route as well as beginnings and endings of stages.

These routes were used in the Middle Ages once the pilgrimage to Santiago de Compostela began to develop, and in the case of the Miñoto Ribeiro Way, Via XVIII was the backbone of this pilgrimage route. Testimonies of hospitals, bridges, monasteries, historical documents and the production and trade of wine support the historical justification of this road.

Starting from the lands of Braga, the Miñoto Ribeiro Way crosses the Baixa Limia region, the Sierra do Xurés and following the course of the Miño River, it enters the wine region of O Ribeiro, in the province of Ourense. From there, it heads north to Santiago de Compostela, through the provinces of Pontevedra and A Coruña. 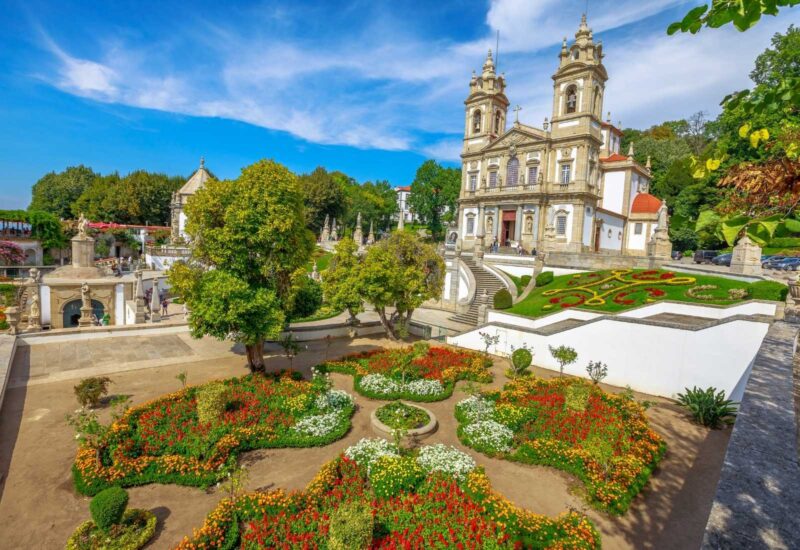 From Braga there are three options to enter Galicia, although we will focus on the main one starting in Galicia, which at some point returns to Portugal to re-enter Spain.

As always, each pilgrim can configure the stages as they wish, but as standard they are divided into nine stages, with a total of approximately 174 kilometers. The stages are:

From Portela do Home you can access Galicia through the border, which connects Terras de Bouro, in Portugal, with Lobios, already in Galicia. A succession of Roman milestones guide the pilgrim with the Caldo River as a companion. Before arriving at Os Baños the road passes by the remains of the Roman mansion of
Aquis Originis
The final part of the route goes to Lobios, where there are lodgings and services.

This stage starts in Lobios, and the pilgrim’s footprints will tread on cobblestone paths and bridges with a lot of history, such as the one in Pacín. A more mountainous stage that offers seductive examples of churches, crossroads and stone wash houses. In addition, in this stage we leave Spain temporarily to spend the night at the end of the Portuguese stage, Castro Leboreiro, where there is accommodation, services and a spectacular waterfall. 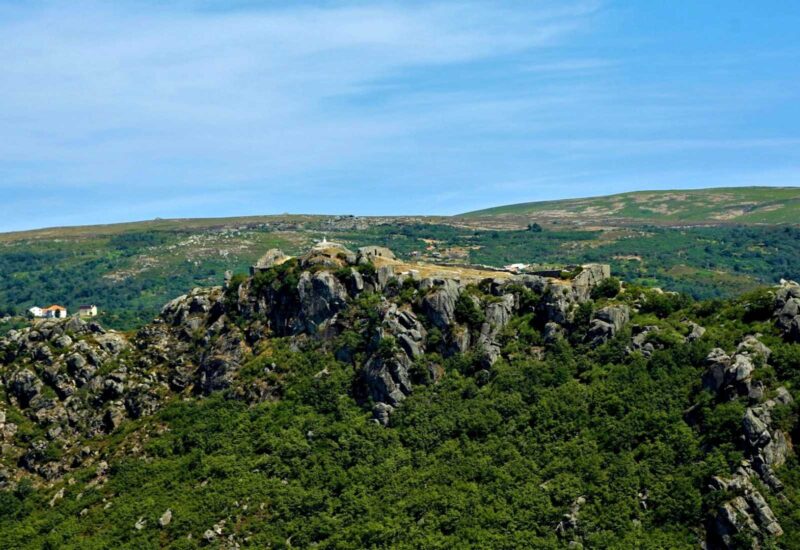 On this stretch of the Camino, we leave Castro Leboreiro and Portugal behind. It descends through cobblestone roads, between bucolic and genuine villages towards Monterredondo. The Miño River makes its presence felt and breathtaking panoramic views and lush nature accompany the walker until the end of this stage in Cortegada, with accommodation, services and hot springs.

One of the shortest stages is the one that starts in Cortegada, although there is a longer and more difficult alternative. A simple and flat stage, among forests of cork oaks, oaks and pines that mark the trails, showing a nature that will surprise us, as well as small villages like San Bieito, where we can see the humilladero of Meréns. Still with the Miño river as a companion, we reach Arnoia and then Ribadavia, former capital of the Kingdom of Galicia, where there are accommodations and services, as well as a beautiful historic center and delicious Ribeiro wines. 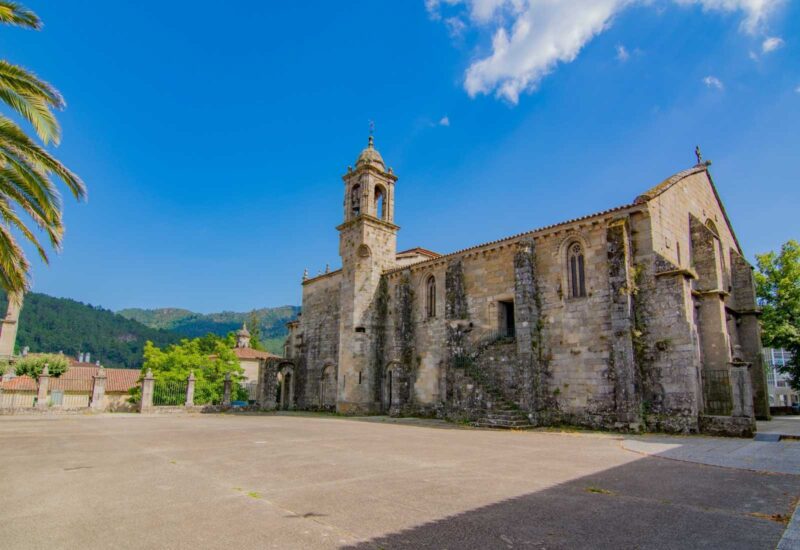 We leave behind the beautiful Ribadavia, at the confluence of the Avia and Miño rivers. The road heads towards Beade and the Monastery of San Clodio, with the Avia River still as a companion along the way. Bridges, churches, crossroads and many medieval remains will be faithful companions until the end of the stage, in Pazos de Arenteiro, with accommodation and services.

This is the longest and most demanding stage of the entire route, a hard stage, with mountain climbs. Beginning in Pazos de Arenteiro, we will find more bridges, medieval cobblestone roads and small villages through trails dotted with mámoas, burial mounds characteristic of the Neolithic, until we reach the end of this stage in Soutelo de Montes, with services and accommodations. 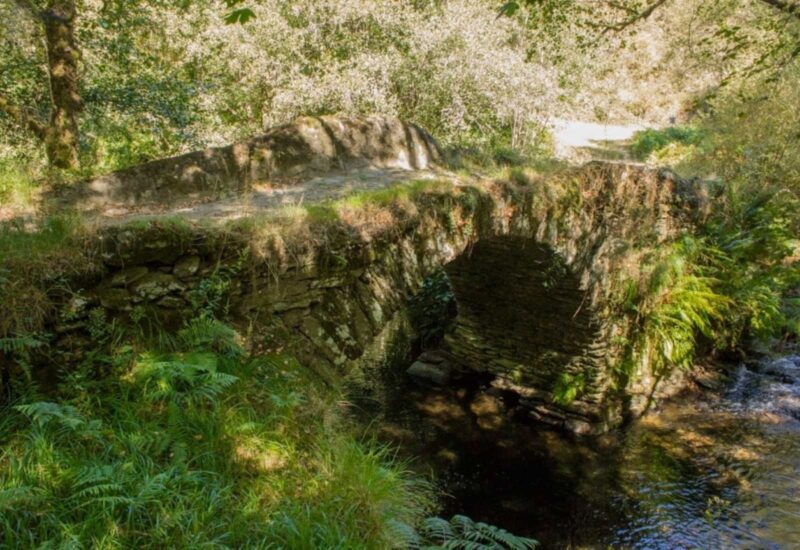 We leave the town of Soutelo de Montes to undertake another long stage, but in progressive descent. Impressive landscapes accompany this route, passing through Gaxín and the medieval bridge of Gomail. The road crosses impressive landscapes until it ends in O Foxo, where we have services and accommodations.

We leave O Toxo and the route heads towards the villages of A Mamoela and O Piñeiro, among others. Today we will see another historic bridge, the Sarandón, in a stage that connects with an important pilgrimage route, the Vía de la Plata. The hike ends in the village of A Gándara, with all services and accommodations.

The last stage of the road, the shortest and the one that brings us closer to the goal. A route full of illusion to arrive, that from A Gándara increases until reaching Santiago de Compostela entering through the Arco de Mazarelos, one of the seven medieval gates of the city and where the Ribeiro wine arrived. It is time to enjoy the road traveled and all the magic experienced during the days spent in the beautiful Compostela. 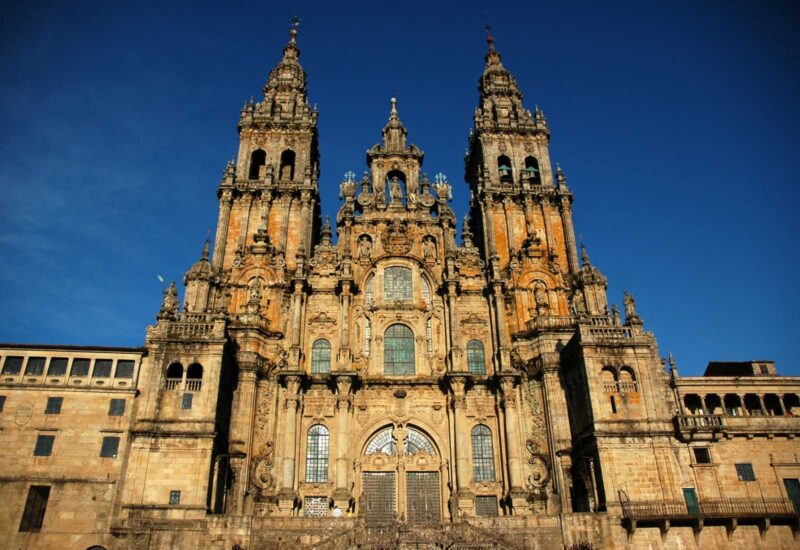 This road is gradually being signposted by the municipalities involved, but it is not fully signposted. Our advice is to always follow a GPS track, which you can download from the official website of the Camino Miñoto Ribeiro. Like all pilgrims, follow the yellow arrow as an unmistakable sign of your good path.

Also, keep in mind that it is a path that runs parallel to the Camino da Geira and dos Arrieiros, sometimes even along the same route, so you can also find signs of another Jacobean route.

Although there are accommodations and services, we strongly recommend that you book your accommodation in advance, and you should be aware that you will rarely find a pilgrim’s hostel. Consult the tourist offices or the official website for more information.

This route can be done at any time of the year, although in the autumn and winter months temperatures will be low and cold, and you may encounter rain.

A path for the senses

In addition to all its historical and patrimonial heritage, the Miñoto Ribeiro Way is a great experience for the senses, as it offers the best of the thermal waters of the province of Ourense as well as its best Ribeiro wines. A lonely road, in which all the magic and tranquility of the Camino de Santiago will make your experience one of the most exciting, and after looking back from the Plaza del Obradoiro, you will remember with great joy this road full of sensations and emotion.