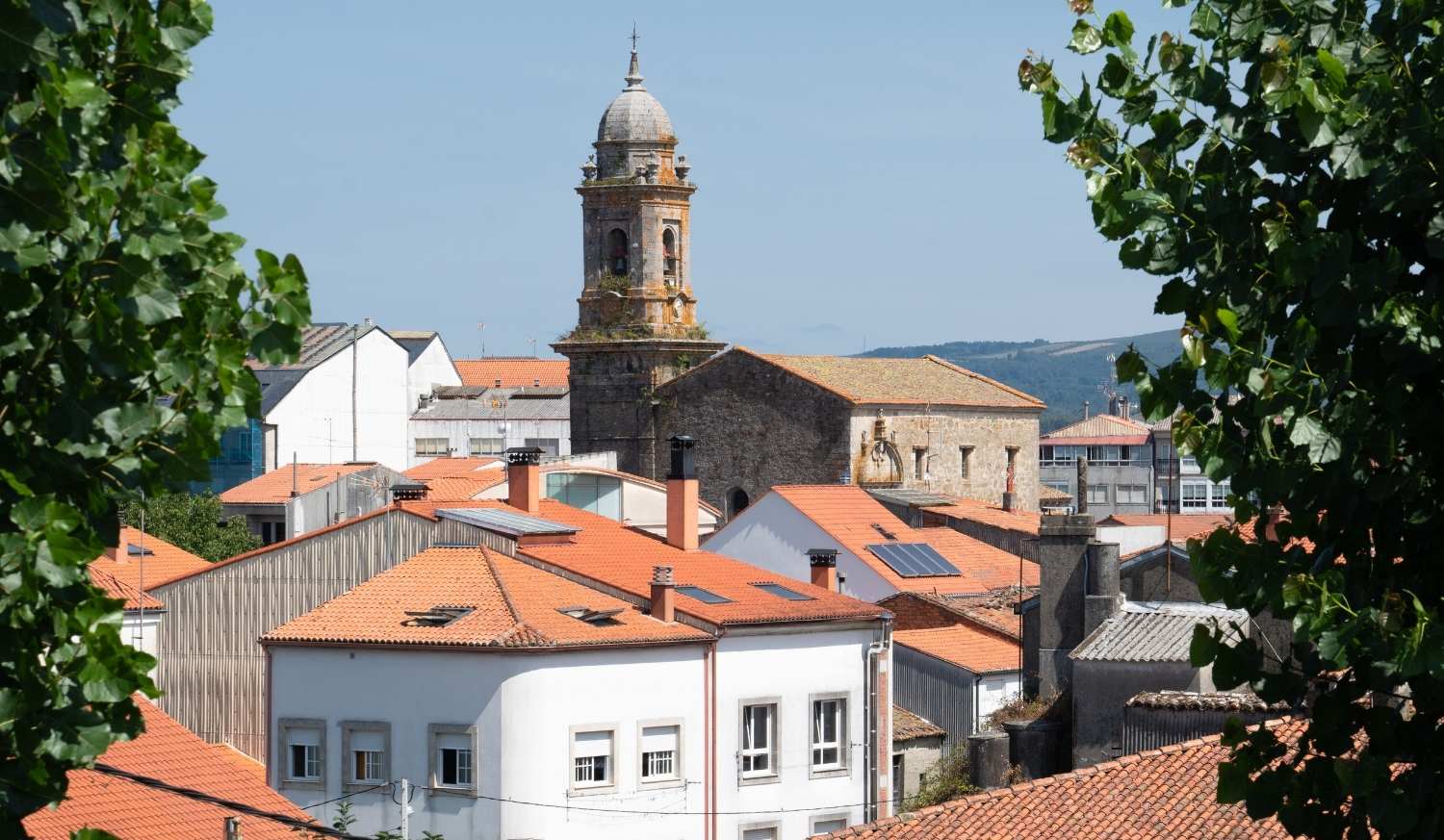 In the heart of Galicia we find the town of Melide, which belongs to the province of A Coruña. Place of convergence of two important Jacobean routes, the Primitive Way and the French Way, which merge their routes to reach Santiago de Compostela.

In this town you will find an interesting archaeological heritage, numerous Iron Age forts and important objects that today can be visited in the town’s museum. It is also worth mentioning the monumental heritage of the town, churches, baroque pazos, bridges worthy of admiration as well as a legendary cruceiro.

What to see and do in Melide

The oldest cruceiro in Galicia

The cruceiros in Galicia are part of the landscape being totally integrated in it. According to Castelao, there are more than 10.000 cruceiros in the whole Galician community. We can find them at crossroads, villages, cemeteries, etc. Although each cruceiro has its own meaning, usually the purpose of its construction was to obtain divine graces, to thank favors, for penances, to protect crops or as a form of orientation marking the boundaries of parishes, properties or jurisdictions.

Next to the church of San Roque is the so-called “Cruceiro de Melide”, which for many is the oldest in Galicia, probably dating back to the 14th century. The obverse depicts a seated Christ in Majesty, showing the wounds on his hands and with a cloth covering his legs. The reverse depicts a Calvary. 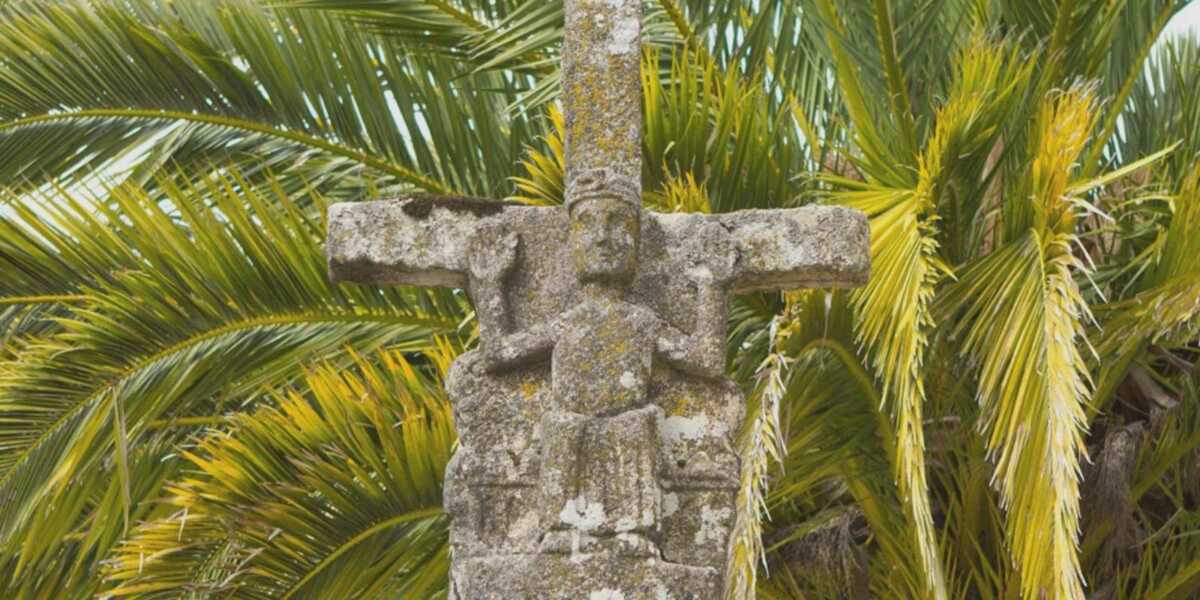 The chapel of San Roque was built in 1949 using the materials obtained after the demolition of the medieval churches of San Pedro and San Roque. The main doorway, one of the most beautiful of Galician medieval art, comes from the old church of San Pedro.

As a curiosity about this chapel, rumor spread that the cover of the chapel of San Roque is the same that appears on the 10€ banknotes. And although the truth is that the Austrian author Robert Kalina only wanted to capture the Romanesque style in the banknotes, it is clear that this chapel fulfills it to the letter. 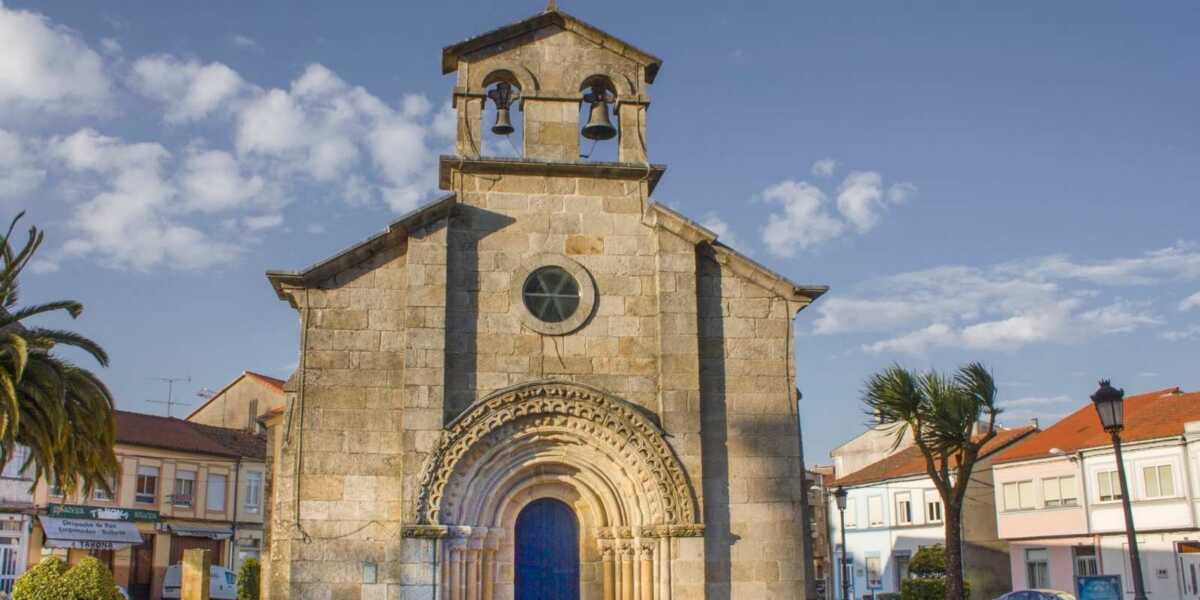 The church of Sancti Spiritus belonged to the disappeared monastery or convent of the Third Order of St. Francis, founded in the 14th century. All that remains of the old church is a small side chapel, with an ogival vault and triumphal arch, called the chapel of Santo Cristo, because perhaps the Christ that is now in the chapel of San Antón was there. Nowadays we have in the chapel the altarpiece that was of the Virgin of the Mercedes, work of the XVIII century. 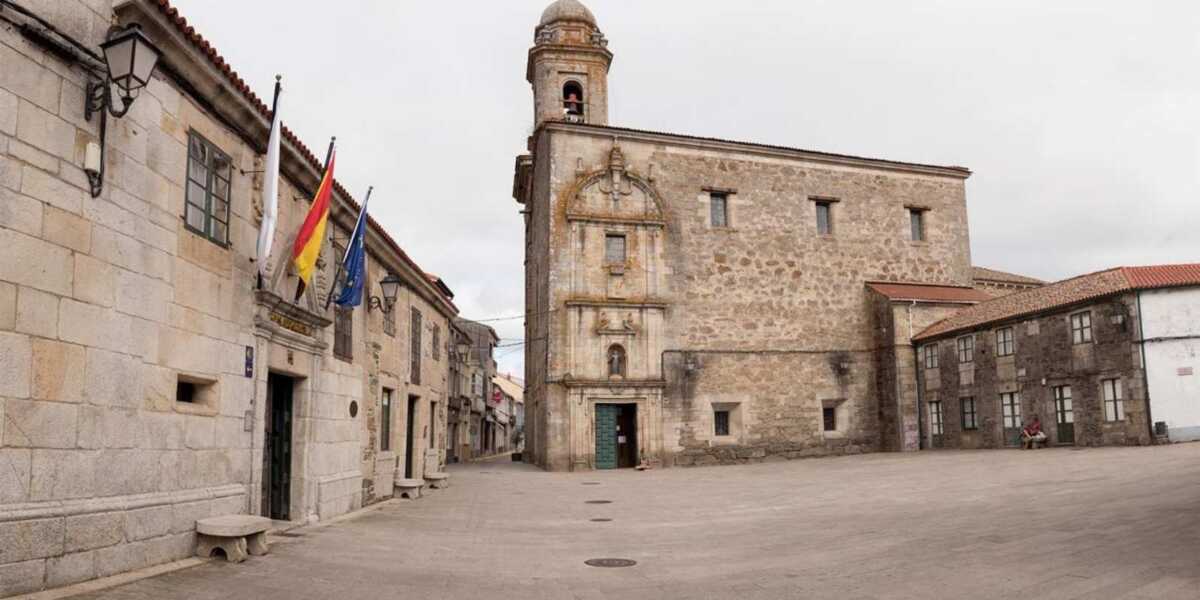 To the west of the Plaza do Convento we find the baroque pazo, with its chapel. It is also known as the Collegiate Church, as it was originally used for teaching purposes, and in the 19th century as the manor house of the Marquis of Corvera. Since 1960 it has been part of the town council of Melide . 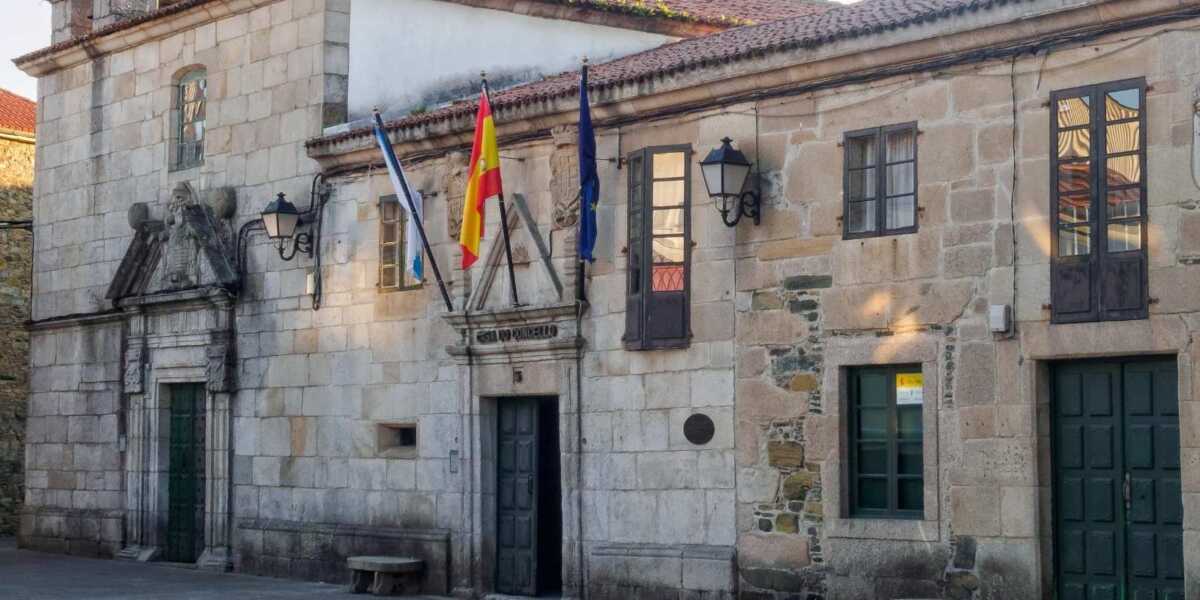 Right at the crossroads of the French Way and the Primitive Way you find the Terra de Melide Museum, which was built in the old pilgrims’ hospital founded in 1375. Here you can learn about the heritage of the region, review the history of the French route, admire old pieces and photographs. 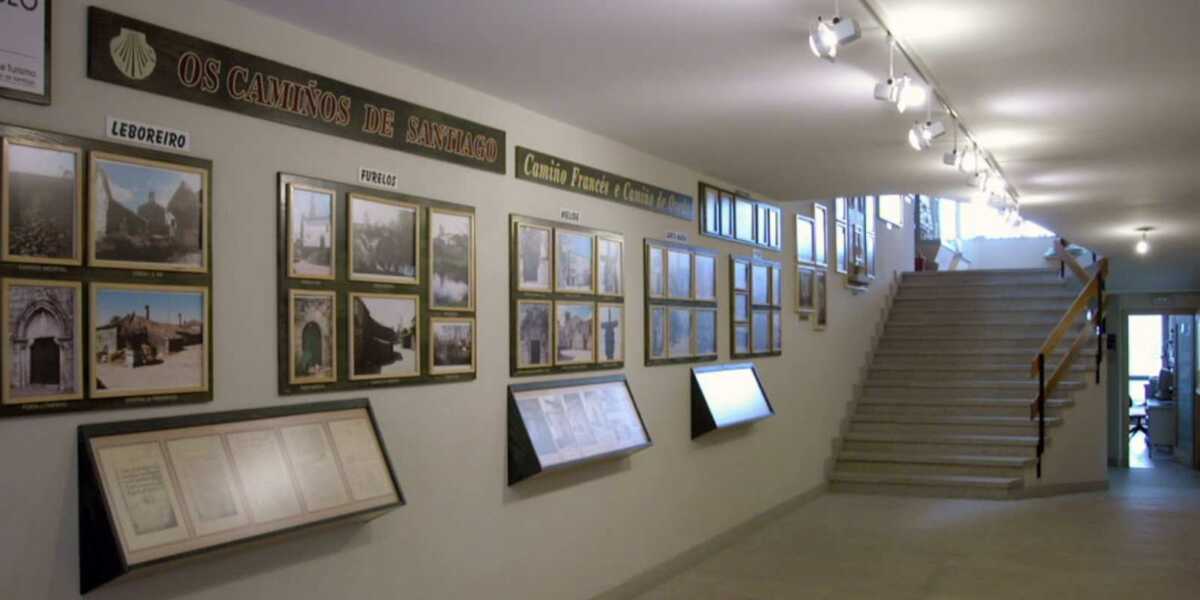 The chapel of El Carmen was built in 1741 within the boundaries of the town of Melide. The floor plan of the church is rectangular, with a semicircular triumphal arch. Inside, the altarpiece and the beautiful image of the Virgen del Carmen stand out. 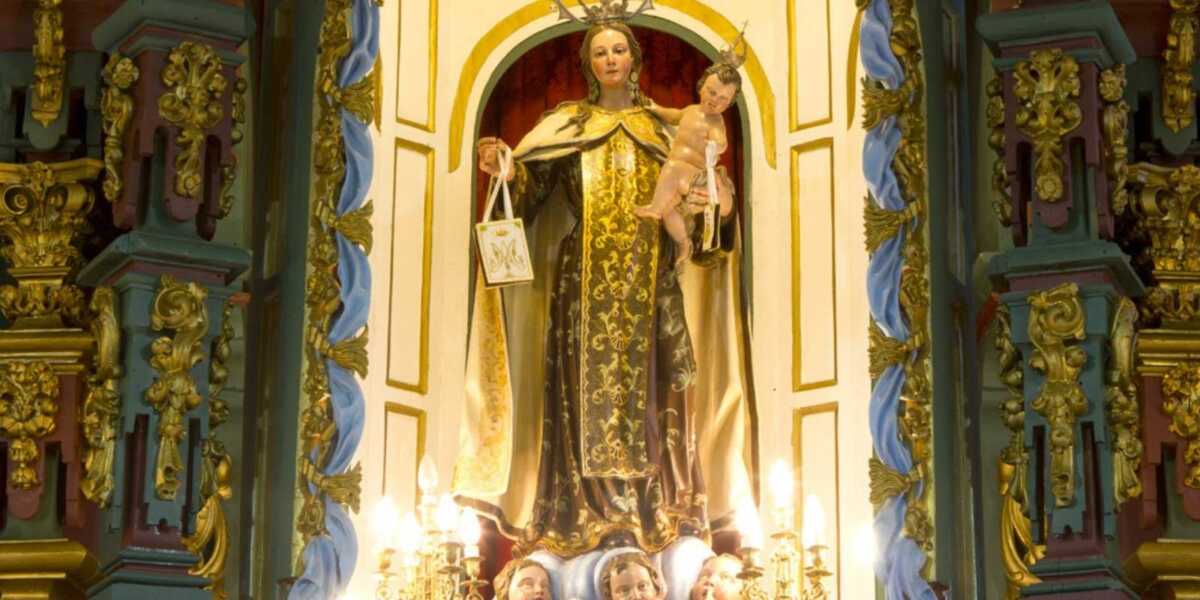 Fountain of the four spouts

This fountain is one of the best known icons of Melide. The wide cylindrical vessel at its base holds the water thrown by four tawny heads topped by spouts, which give the fountain its name. As an anecdote remember that formerly in this glass inhabited several types of fish. Next to the fountain we can contemplate the vegetal shield of the City council of Melide formed by the shield of San Pedro, patron saint of the town. 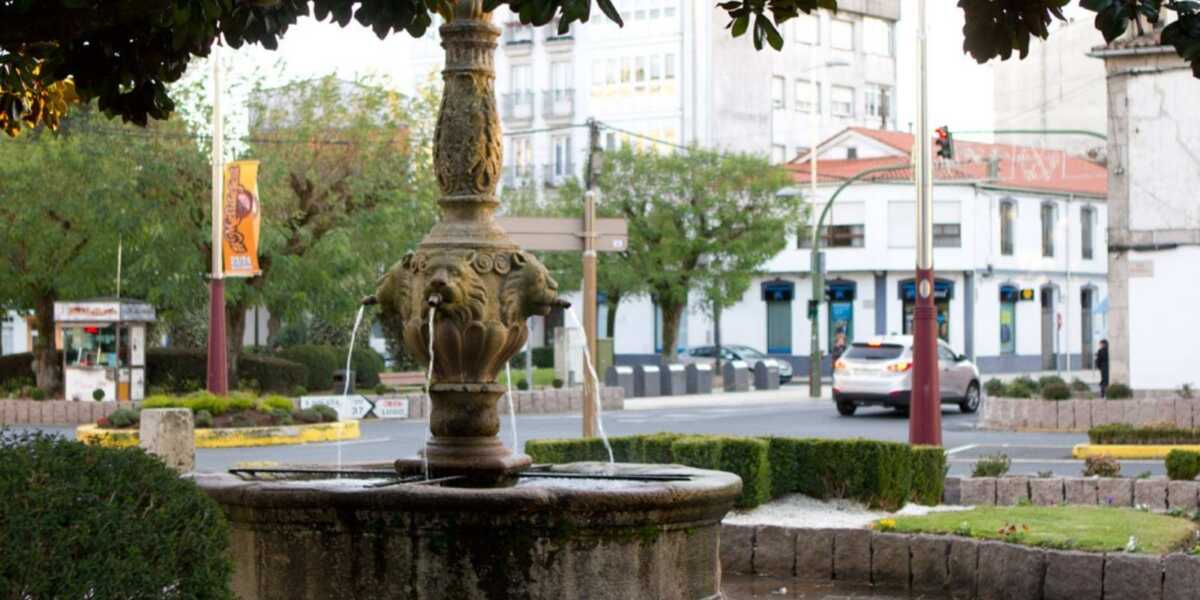 The octopus of Melide

It is well known that the dish par excellence of Galician gastronomy is the octopus á feira, a delicacy that can be tasted everywhere in Galicia. But there is some debate as to whether it is better to eat octopus from the coast or inland. It is curious that the octopus capitals par excellence are located in a geographical triangle formed by Lugo, Melide and O Carballiño, three localities that have rather little sea.

Well, one of the great attractions of Melide are its pulperías, so if you want to give yourself a tribute you can not leave without trying this delicious dish.