The Cíes Islands, a treasure in the Vigo estuary. Located in the province of Pontevedra in the northwest of the Iberian Peninsula, it is part of the Galician Rias Bajas, in Spain. They belong to the National Maritime-Terrestrial Park of the Atlantic Islands of Galicia together with the islands of Ons, Sálvora and Cortegada, and forms a natural barrier between the estuary and the sea. The archipelago is formed by three main islands: Monteagudo or North, Montefaro, joined to the first one by the sandy area of Rodas and San Martiño or South.

A natural environment, full of paradisiacal beaches, the richness in fauna and flora and its incredible landscapes, make this place an important cultural and natural enclave. We must also say that in addition to speaking of the Cíes as nature in its purest state, they offer a good sample of cultural heritage: ruins of monasteries, forts, salting factories and warehouses of the carabineers.

A paradisiacal enclave only 50 minutes from Vigo. The Cies Islands have something special, a unique landscape, a peace that captivates you and even one of the best beaches in the world . An ideal destination if you’re planning a getaway after having made the French Camino de Santiago.

If all this doesn’t convince you to visit this small paradise located in Spain, we will give you all the details about the Cíes Islands that will make you want to visit them. 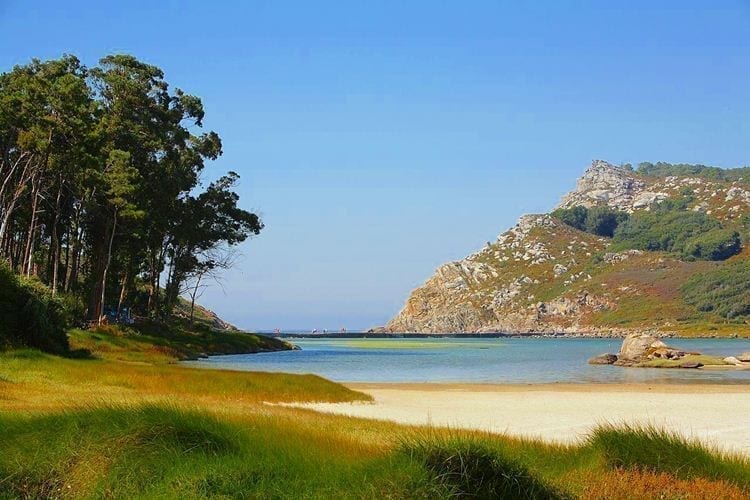 At the beginning of this post we have talked about where they were located, so we will take as a reference the city of Vigo. Although they appear associated with this city, it is possible to arrive from other ports such as Baiona or Cangas, but the shortest route is from Vigo.

How to get to the Cíes Islands? To go to the Cíes Islands is only possible by boat, there are three options: travel with one of the passenger transport boats that leave from Vigo and Cangas, hire an organised excursion or apply for an anchoring permit on the island and go to the island with your own boat.. These three options are possible during the summerDuring the low season, which takes place in the coldest months of the year, it is only possible to visit the Cíes Islands by hiring an organised trip with the express authorisation of the director of the Natural Park. These ferries will take you directly to the islands of Monte Agudo and O Faro . The third island, San Martiño, can only be reached by private boat, which is also the only way to access the archipelago all year round.

It is a National Park and after the saturation suffered in 2017, there are more tourist restrictions to be able to visit them.. Access is limited to 2200 people per dayIt is therefore advisable before deciding to go, to reserve the permit in advance. The Xunta de Galicia has enabled  a <a href="https://autorizacionil