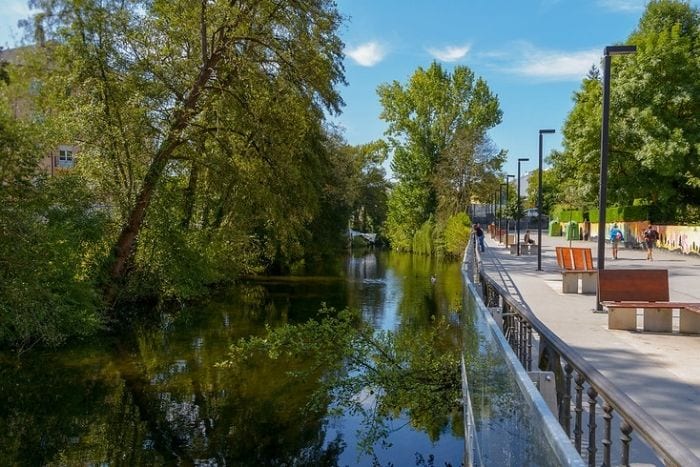 We are in front of one of the most important towns of Lugo, a town with a charm that will not leave us indifferent without choosing to visit it. Sarria takes on great importance in Galicia, and this is due to the fact that for many pilgrims it has become the starting point of the Pilgrim’s Way to Santiago. This road connects the French Way of Saint James with the North Way and is the last place where you can start the route since it is located 114 kilometers from Santiago and meets the minimum distance to get the Compostela.

A starting point that day by day is more visited as it is the way to reach the goal in five or six stages. If you want to do this route in less than a week do not hesitate to choose the Camino de Santiago from Sarria.

Being in the middle of the Jacobean route, medieval history is closely linked to pilgrimages and had shelters such as the hospital of San Antonio where they received a bed, primary care if they were injured and care.

Whether we decide to visit Sarria or start our Camino, this town invites us to get to know it in depth. We are in one of the largest localities in Lugo, and although for some it is a crossing point, it contains a great cultural and architectural offer that we cannot ignore.  A town that tells us its medieval history and we can not fail to visit one by one the wonders it offers us.

In addition to its monumental offer, this municipality has numerous and incredible natural landscapes near the river Sarria that will leave us amazed.

This is one of the most emblematic buildings in Sarria, also known as the Convento de la Merced. A construction that stands out for its church, with a Plateresque façade and its Gothic cloister.

Nearby is the Miradoiro do Cárcere, with a modern transept, from where you can enjoy a beautiful view of the town, as well as the old Preventive Prison, a prison building from the 1930s to the 1950s, and the old San Antón hospital, which now houses the courthouse. 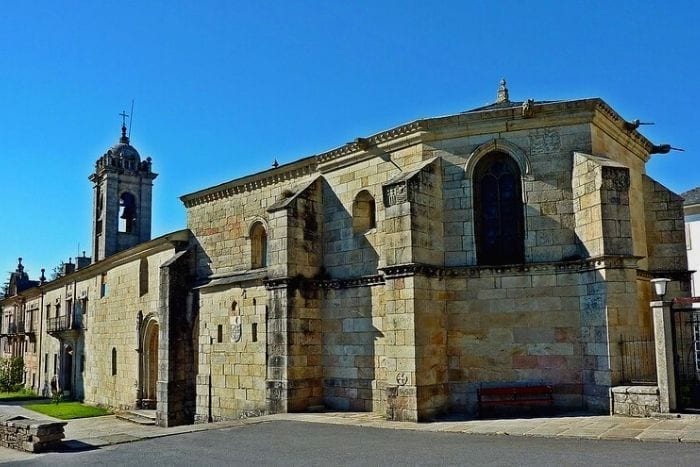 A beautiful church located three kilometers from Sarria, dependent on this municipality. Dedicated to the Apostle Santiago, its origins date back to the X-XI century since there was a monastery in the place. The church was built next to this monastery. Part of its Romanesque originality has been preserved to this day, although in the 18th century its original apse was replaced by another with rectangular shapes. We could highlight several features of this church such as the tower on the façade, the portal that preserves its Romanesque origin or the capitals of the columns and its picturesque decoration. The figure of the Apostle is what strikes us most inside him. 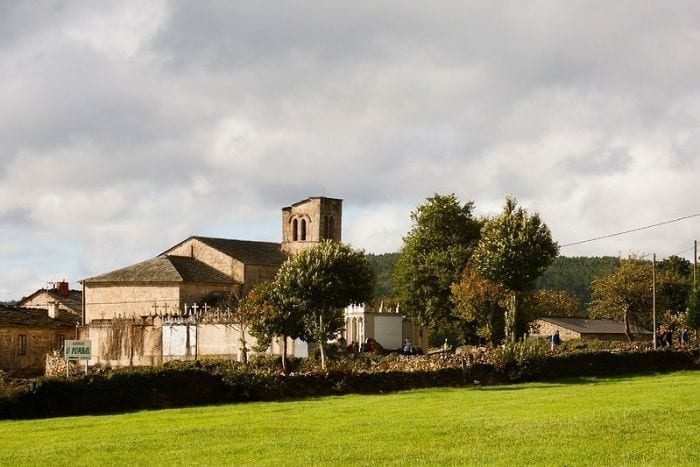 We arein the centre of Sarria, near the remains of the Castle of Sarria. There we will come across a small parish church with features of Romanesque style and Gothic elements of the thirteenth century. Its façade is notable for its façades, as well as its north wall. The façade is crowned with a belfry from 1860, and the fountain in the same square, known as Fuente de San Salvador, dates from the same year. 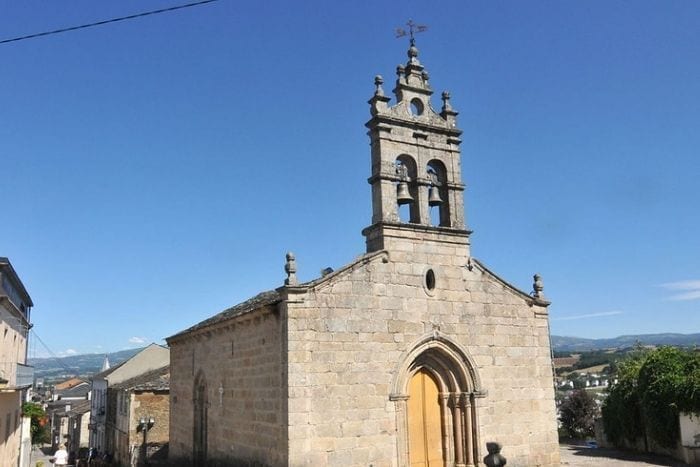 This is a 12th-century Romanesque building that was replaced by the one we now have from the 19th century, which is Gothic in appearance. Its two-tone façade in stone and white and its paintings alluding to the Santa Compaña and its clock in the tower topped with a pyramid-shaped needle attract attention.  Its interior holds different representations of 19th century Galician imagery: Cristo Crucificado, San Xoán and Santa Mariña. It can be reached by climbing a staircase that gives way to good views of the surroundings.

Walking, in the highest part, you can see the ruined remains of a 15th century castle although the origins date back to the 12th century. It was built on top of an old castro and on top you could see almost all of Sarria. It is colloquially known as “Torre do Batallón” but it is not the right one. An important fact is that during a revolt it was destroyed and later rebuilt, but due to its abandonment it was taken to the lamentable state that we can observe today.

We can continue with a long architectural and historical list, explaining one by one what we can find in our walk through Sarria, but we have indicated the most significant and those that you can not miss. No less important we will find places as picturesque as the famous staircase, the viewpoint of the prison, the Ethnographic museum of the Bread, etc. We may be passing through this village if we do the Camino, but if we do go on a visit, although we may have enough time to visit and get to know it, this town has some attractions that make it worthwhile to invest one more day.

After walking the streets of this charming village and visiting all the corners it has to offer, not everything is going to be a cultural visit. The gastronomy that Sarria offers is something that we cannot let pass either, so for our experience in the organization of the Way of Saint James from Sarria and for the opinion of our clients we recommend you:

It is a typical Galician pulpería in which we can find an octopus, a feira style. She has a reputation for being one of the best in Lugo. A very familiar and homemade place in which, in addition to enjoying its star dish, the octopus, we cannot leave aside its wine and its aguardiente. It offers us an extensive menu so that we can complete the meal in an economic way.

The restaurant is located on the ground floor of the hotel, an establishment with history. It offers us a Galician gastronomy very elaborated with products of the zone and of quality. He’s got a big card to choose from, we won’t know where to start. Also if we are undecided or just want to enjoy your food in an economical way, have menu of the day.

If we want a more casual atmosphere, to tasting the local gastronomy, we want to skip the Galician menu, Cafetería Polo is our place. In addition to the menu with typical dishes, the menu includes sandwiches, hamburgers and exquisite pizzas.

For something lighter and if the weather is good, don’t forget to visit any of the bars on the Malecon where you can enjoy a pleasant evening with a soft drink and a tapa by the river.

The most normal thing in a city or village is to visit its monuments and natural spaces as well as to taste its gastronomy. But not everything is based on that, and we may want to opt for different activities and active tourism. As we have pointed out before, Sarria has incredible natural spaces. You can visit the recreational complex of O Chanto, on the banks of the river Sarria. We can practice fishing, hunting in preserves, hiking or horseback riding. 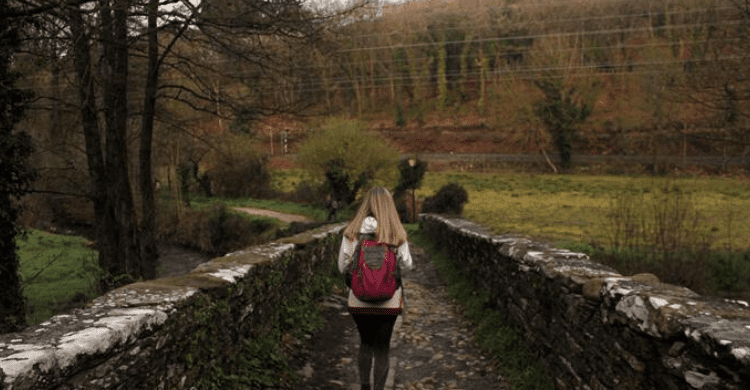 After reading this article it is possible that in addition to being curious about the town you might want to do the Way of St. James. If so, don’t waste your time and find out more about the Way of Saint James from Sarria.