The Camellia Route will help us to know Galicia from north to south through 12 pazos and gardens. In all of them, this mysterious flower, which is the subject of numerous legends, will be the real protagonist.

On our journey through beautiful gardens linked to the historical heritage of the Galician land, we will see almost 8,000 varieties of camellia. We will go into pazos with tradition and history and we will be delighted, not only with the botany of this tree, but also with the splendour and charm that they give to the places where they are located.

When do we do the Camellia Route?

Almost any time of the year is good, as camellias have the extraordinary ability to bloom in different seasons. Spring, autumn and winter are the seasons when we will find camellias in them, although their ‘official’ flowering season is winter.

We recommend that, because of the charm of seeing such colourful flowers in the cold season, you choose this time of the year to do this peculiar route.

Where do we start the route?

The manor houses and gardens that are part of the Ruta de la Camelia are located in the provinces of A Coruña and Pontevedra, so it is very easy to get to the we can start from the north, in the town of Bergondo (A Coruña) and finish in Vigo, or do the route from the south, everything will depend on the itinerary that we have marked.

Most of the manors and gardens are located at a distance of no more than 25 kilometers from each other so we can visit several in a single day.

What manor houses and gardens will I find on the Camellia route?

Located in Bergondo (A Coruña), the garden of this legendary pazo, the one that begins with an inscription, “La nada, aquí”, on a marble slab on the jetty, is divided into two parts. To reach and discover this jetty we will cross a labyrinth of boxwoods with varied pruning in the shape of stars, circles, flowers, shields, yews, strawberry trees, plane trees, horse chestnut trees, laurels, rose bushes, azaleas, ivy will accompany us on our way in which the japonica camellias, arranged in an atypical 8+1 formation, are the silent protagonists of the history of this mysterious house.

The ‘lung’ of Santiago de Compostela, after visiting the Saint in the cathedral, is an obligatory place of pilgrimage for visitors. 85,000 square metres of garden, in which many of the trees are included in the Catalogue of Singular Trees of Galicia, others, such as a Normandy fir tree, known as the La Perona’, since it was planted in 1947 to commemorate the visit of Evita Perón, has a story behind it.

And always the camellias, with more than 65 specimens of the japonica variety, some of them centuries old, planted in 1858 for the Agricultural, Artistic and Industrial Exhibition, overshadow the rest. 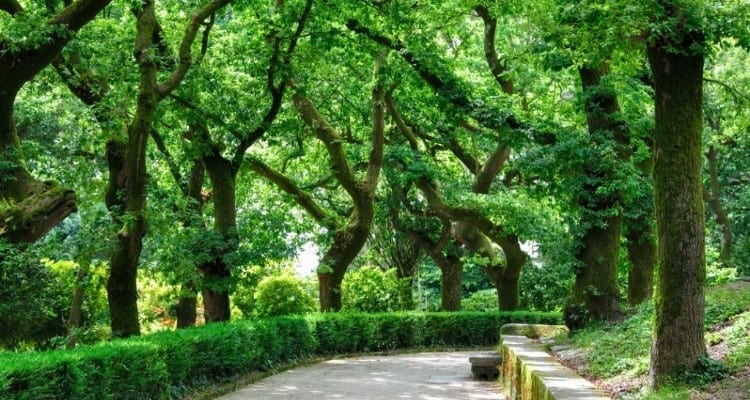 The garden of this pazo is considered, for its botanical and landscape value and its diversity in decorative vegetation, as the most fascinating of the Galician land. It was in the 19th century, when Uncle Ivan, who was none other than Ivan Armada y Fernandez de Cordoba, considerably increased the presence of camellias in this house.

Strolling among the imposing camellias, huge magnolias, olive trees, ombu, Australian fern, Washingtonia palms, or the pyramidal oak is a real pleasure for the senses. A must on the Camellia route.

Located in A Estrada, it is owned by the Dukes of Medinaceli and has been declared an Asset of Cultural Interest, among other things because of its spectacular garden, which occupies 8 hectares and is known as the ‘Galician Versailles’ or the ‘Generalife of the North’.

We are welcomed by a parterre surrounded by paths of perfectly pruned box trees that will lead us to camellias of more than eight metres high, azaleas, rhododendrons, palm trees, oaks, walnut trees, chestnut trees and birch trees.

It is worth drawing attention to a stone boat placed in the centre of one of the ponds of this pazo in which two sailors with cannons watch over the majestic hydrangeas arranged on its bed. 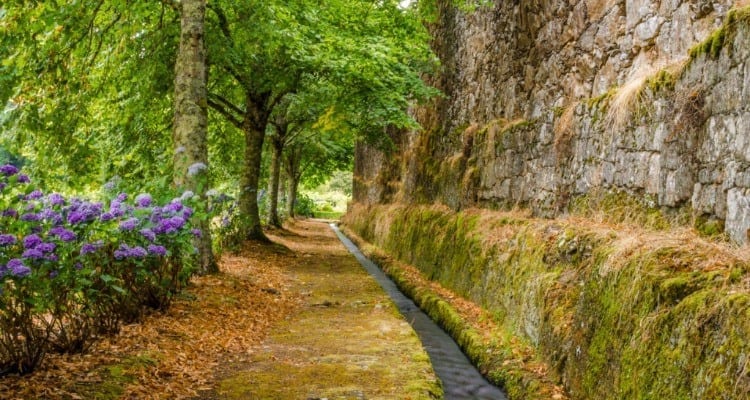 In Padrón, last stop of the Portuguese Way which was once the home of the Galician writer Rosalía de Castro, we find a small but nice garden, with the stone as the protagonist, the green of the meadow is the best contrast to appreciate the Carpets of red and pink hybridreticulata camellias form around the tree when they fall.

In the centre, the vine under which Rosalía de Castro wrote the poems collected in Cantares Gallegos, Follas novas and En las orillas del Sar. A garden where culture and nature form a perfect tandem. 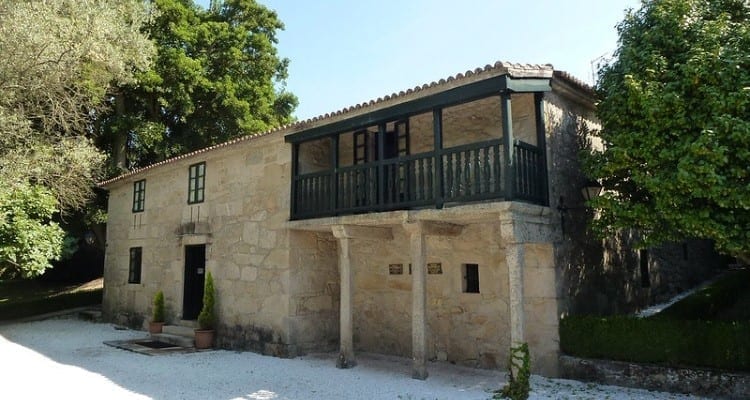 In Vilagarcía de Arousa, in the heart of the city, we find this Garden of Route of Padre Sarmiento in Vilagarcía de Arousa, we find this Garden with International Excellence that has more than 4.500 specimens of camellias of 800 different varieties. Not to mention the other botanical species that are present in this imposing garden that has been cared for with the utmost care since the 17th century.
A visit to this Pazo de Rubianes, which in the 19th century was enlarged by the gardener of the Campo del Moro of the Royal Palace of Madrid, François Viet, and which in 2006 suffered the scourge of the fires that devastated Galicia, being reborn in all its splendour, is a must. You can’t miss this pazo if you are doing the Camellia route. 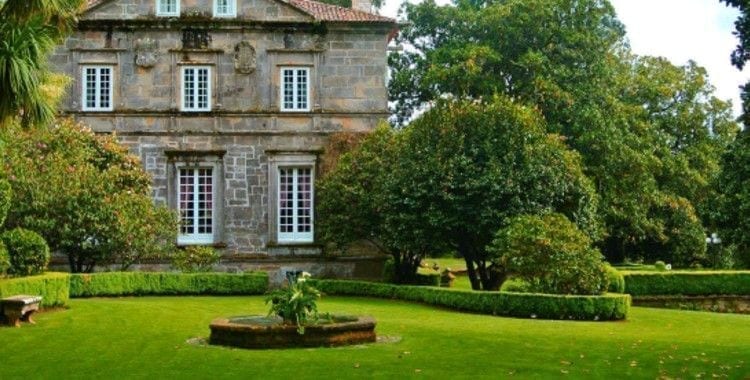 In Ribadumia we find this haven of peace where, apart from tasting a good Albariño wine, made in the house, we will see more than 5,000 camellias of 1,500 different varieties in bloom.
Four varieties stand out above the rest, the japonica, the reticulata and the fig (the latter was awarded the Golden Camellia in the International Competition dedicated to this tree) and the sinensis, which is used to make tea. 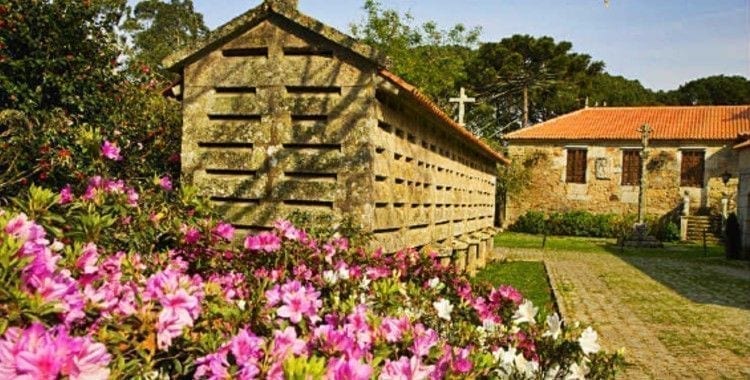 In the Pontevedra town of Meis we find another Garden of International Excellence thanks to its camellias. Of English type and 5 hectares, it was projected by the landscape architect Brenda Colvin, after Robert and Margaret Gimson arrived in Galicia in 1968 in search of a place to practice gardening, their great passion.
Red, white, reticulata, violet camellias… give life to this garden which in winter, the flowering season of the tree, is a real spectacle.

Its 54 hectares of trees, farm and garden, make this place overcook the visitor. The pazo, whose imperial façade and staircase is a true marvel, was originally a farm of which a dovecote is preserved.
Stroll through the Arboretum, as it has been known since 1949, is a must on this route of the camellias At our feet a multicoloured carpet of this legendary Asian flower and looking around we will discover more than almost 2,000 varieties of trees from all over the world, many of them included in the Catalogue of Singular Trees. 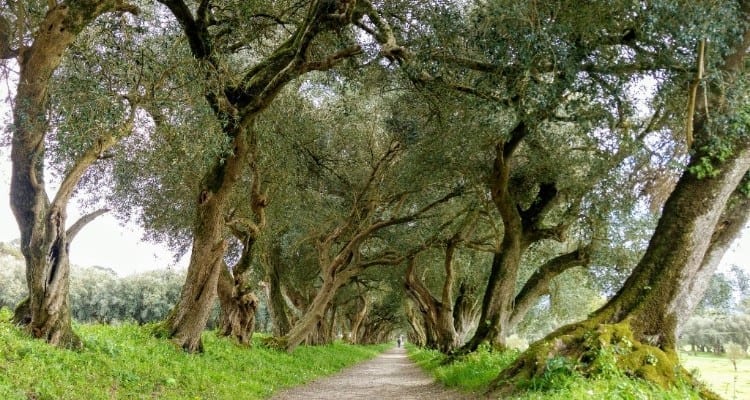 In Pontevedra, located at the source of the Vigo estuary, we find this imposing 12th century castle and its 25-hectare garden with more than a hundred varieties of camellias, ancient chestnut trees and trees from all continents.
Roses and camellias compete in beauty… and in colour. Red, white, pink… they form an indescribable spectacle for the sight and smell, making the imposing view of the castle that houses them small.

In the city of Vigo,  this park with fortress, has an exceptional archaeological value, thanks to the military settlement, dated between the third and first century BC, which is in its lower part. The botanical value of the species that populate this enclave is the second reason for us to take the time to visit it.

In 2014, and on the occasion of the celebration in the city of the 50th edition of the International Camellia ExhibitionIn the same year, numerous specimens were planted and placed according to the origin of the camellia: from Australia, the United States, England, Italy and Belgium, up to a species called olivica, in honour of the city of Vigo, whose symbol is the olive tree. In the city of Vigo we find another pazo that would not be understood without its garden, which gives it an extra beauty. Inspired by the French baroque gardens, it was created in the 19th century, the layout consists of six parts: access garden, rose garden, French garden, tea meadow, solana and forest.
In the tour through the stately garden, we will have to stop in front of a camellia of more than 205 years of the japonica variety, known as ‘Methuselah of the camellias’, and that boasts of being the longest-lived of Galicia. Incorporated into the garden by the Marquis of Alcedo in 1860, coming from the Marquis of Loureiro nurseries in Portugal, at that time it was already about 50 years old and today still shows the visitor its splendour in winter.

From Monday to Friday from 8 a.m. to 3 p.m. vehicle access is allowed. In the evenings and weekends access without vehicle. Free admission.

Recommendations for the Camellia Route