The 9 most important cathedrals on the Camino de Santiago

In the evolution of the History of Art and Medieval Architecture, experts agree that it would not have been the same without the existence of the different paths to the tomb of Santiago the Apostle. Thus, we will find in the Road to Santiago churches and cathedrals churches and cathedrals, the most important among the different Jacobean routes.. The latter, as the seats of bishoprics, would be built sometimes with great pomp and artistic quality, for the greater glory of God and even for the promotion of the city itself.

In some cases, as in the case of the Cathedral of Santiago. In addition to being cathedrals, they could be basilicas, as long as they housed the relics of a saint. Let’s see which are the most important cathedrals on the different Camino to Santiago de Compostela in Spain; we do not include the Cathedral of Santiago, because it deserves an article of its own that you can read here.

On the French Way…

This site is located in Jaca, in the province of Huesca, and is part of the part of the French Way of Santiago from Somport. A singular example of early Romanesque architecture, it was ordered to be built by King Sancho Ramírez in 1077. Closely linked to the origin of the city and its institutionalisation as a cathedral, it still conserves its basic configuration as a Romanesque church, with a basilica floor plan with three naves, apses and a dome. It has decorative motifs typical of the area, such as the checkering of the imposts and the balls on the exterior supports. After several subsequent reforms over time, it is a temple that you should not miss.

Declared World Heritage Site by UNESCO in 1984, the Cathedral of Santa María in the city of Burgos is the first representative of Gothic architecture in Spain. Built on the site of an 11th century Romanesque cathedral, on July 20th 1221 the first stone of the new cathedral was laid, which was to be built in the Gothic style, the most avant-garde at the time. Built in record time, only 39 years, it was enlarged and reformed in successive centuries. With its decorative exterior spires, it is a must-see landmark on the The French Way of the Camino de Santiago and very characteristic in the urban profile of the capital of Burgos. 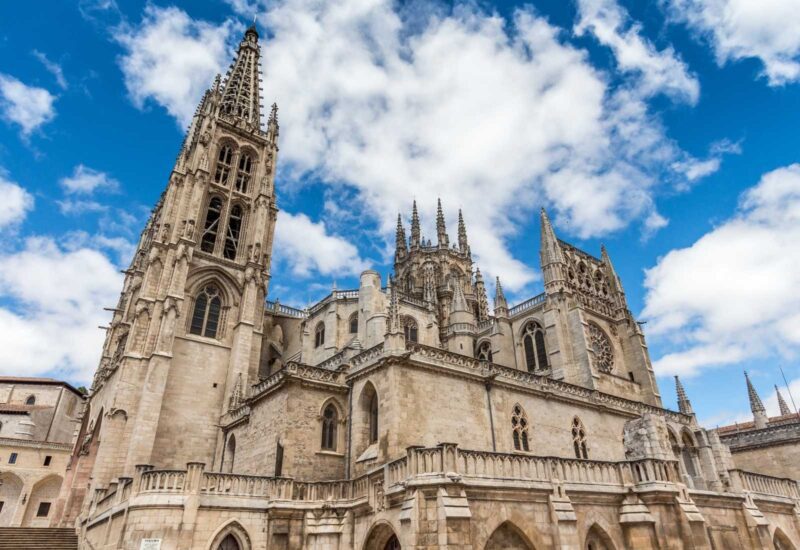 In the historic centre of León, capital of the province of the same name, we find the Cathedral of Santa María de Regla, the first monument in Spain to be declared an of Cultural Interest in 1844. It is known as Pulchra Leonina. The “Bella Leonesa”, perhaps because of the ethereal and light character that its stained glass windows bring to the whole reducing the use of walls. Built in Gothic style on a site with a lot of history between 1205 and 1301, many legends revolve around it, such as the legend of the mole, which tells how a small evil mole was destroying every night what was built during the day, and the Leonese, with great anger, waited for him at night and hunted him down; they say that the skin of the mole hangs inside the building. A cathedral essential on the French Way of the Camino de Santiago. 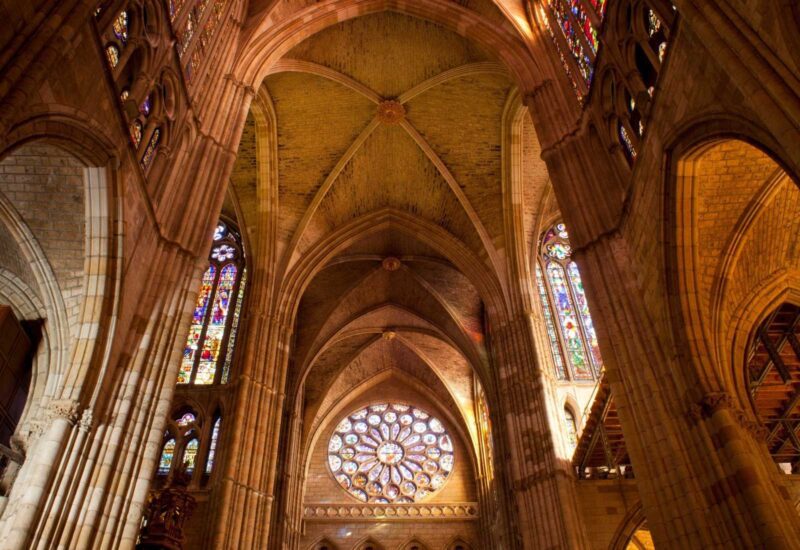 Built in the historic center of Astorga, in the province of León, it has been a World Heritage Site since 2015 as part of the French Way of the Camino de Santiago. Built over an earlier Romanesque temple, the first stone of the present cathedral was laid in 1471, and its construction lasted until the 18th century. Simply surprising is its façade, an authentic exterior stone altarpiece with profuse and varied baroque decoration. Nearby is the Casa de los Botines, the brilliant architect Antonio Gaudí, so a walk in this environment is well worth it.

On the Portuguese Way…

Located in the city of Tui, in the province of Pontevedra, on the top of a promontory overlooking the river Minho and Portugal. Built between 1120 and 1180 in Romanesque style, its Gothic façade, dating from 1225, stands out, as it is an unusual style in Galicia. It has been an Asset of Cultural Interest since 1931, and is an obligatory stop in the Portuguese Way of the Camino de Santiago. Being in a border town, the building has crenellated elements that tell us about its defensive past. 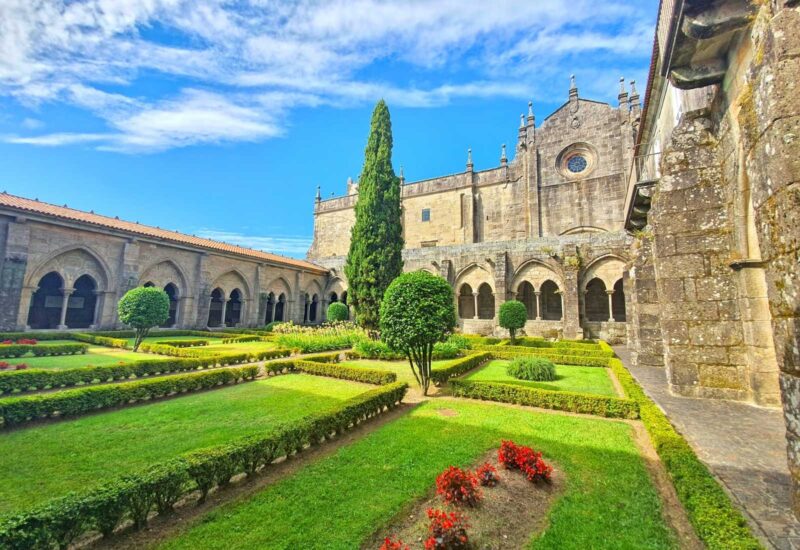 On the North Road…

Bilbao Cathedral (province of Vizcaya) since 1949, is a World Heritage Site as an element associated with the Pilgrims’ Route to Santiago de Compostela in northern Spain, as well as an Asset of Cultural Interest since 1931. Its construction dates from the end of the 14th century to the beginning of the 15th century, although there were later alterations and additions. For you, pilgrim of the The Northern Pilgrimage Route to Santiago we recommend you to visit it and don’t forget to cross its Puerta del Angel, traditionally known as the Pilgrims’ Gate and indeed a scallop shell crowns this access.

On the Primitive Way…

Located in the capital city of Asturias, it is known as Sancta Ovetensis for the quantity and quality of the relics it houses. Built between the 13th and 16th centuries in Gothic style, it has been a Site of Cultural Interest since 1931 and, together with the Holy Chamber, which contains the Victoria and Los Angeles crosses among other jewels and relics, has been a World Heritage Site since 2015 as part of the Pilgrims’ Roads to Santiago in Northern Spain, included on this list. Located in a historical place, it is a destination for pilgrims of the Way of the Saviour as well as the starting point of the first historical road to Santiago, the Primitive Way of Santiago. 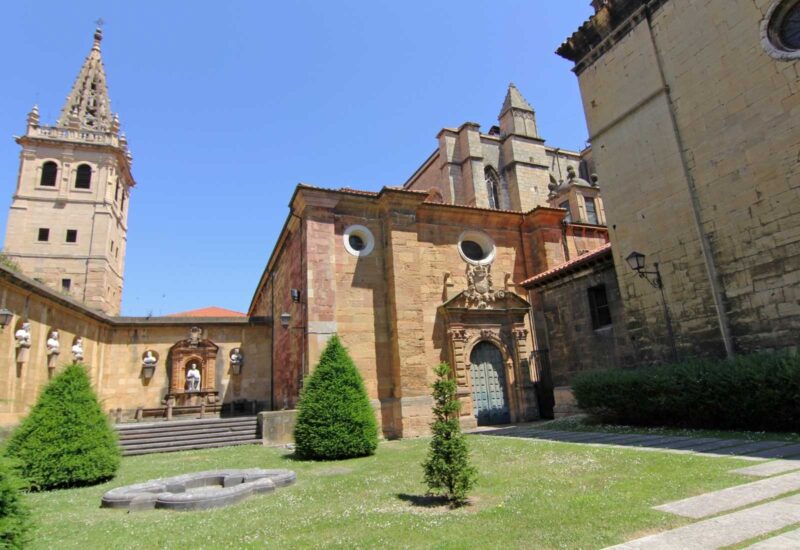 On the Vía de la Plata…

Built in the historic centre of Seville, capital of the province of the same name and of the Autonomous Community of Andalusia, it has been a UNESCO World Heritage Site since 1987. Just 400 meters from the canal Alfonso XIII, already existed in the twelfth century but as a great mosque, because at that time the Muslims dominated Al-Andalus. It is in the 15th century when the Chapter decided to build a Christian temple in Gothic style, being the largest cathedral of this style in the world, and the third largest in Christendom. Located at the origin of the The Camino de Santiago along the Via de la Plata. It opens like a book on the History of Art, as we will find all the religious architectural styles since the Middle Ages. As a differentiating element, to highlight, among many other elements, its tower and mythical bell tower in the skyline of the city, the Giralda of Seville. 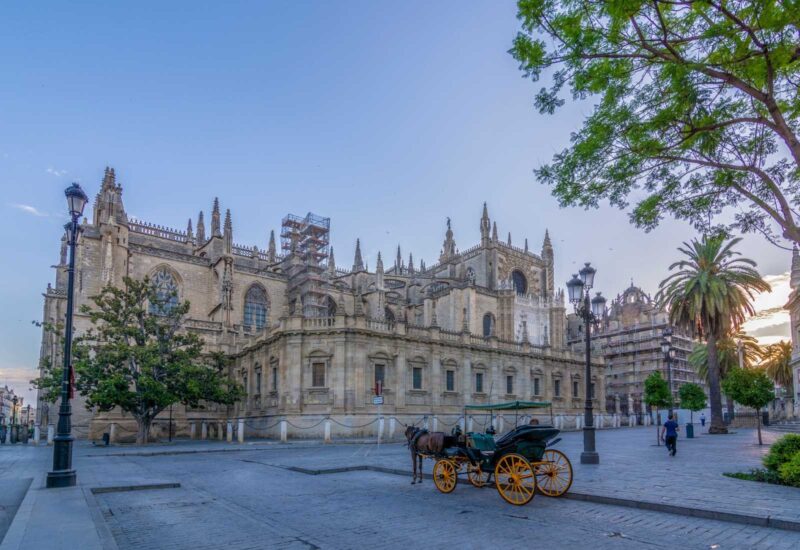 Located in the historic center of Ourense, capital of the homonymous province and in the middle of the Way of Santiago along the Via de la Plata. It was built between the 12th and 13th centuries in Romanesque and Gothic style, with later alterations and additions. Not to be missed is his Portico of Paradise. This is clearly influenced by the Portico de la Gloria in Santiago de Compostela, although it was built a century later: here we also find a seated statue of Santiago presiding over the mullioned window.

If you are passionate about the Way of Santiago and medieval architecture, on your pilgrimage to Santiago de Compostela you will be able to visit, get to know and enjoy to the fullest the different cathedrals that you will find on the route. We guarantee that they will not leave you indifferent.