Discover the Holy Door! The protagonist of the Xacobean Year.

On the afternoon of December 31, 2020, as every eve of the inauguration of the Compostela or Jacobean Holy Year, the opening of the Holy Door of the Cathedral of Santiago de Compostela was celebrated, on the occasion of the beginning of the ordinary Holy Year 2021. A door that would close again just a year later, at the end of the calendar, but as you well know, the year 2022 is also a Holy Year, in this case extraordinary by papal will, so it will remain open 365 days more.

“Get out of your land, the Apostle Santiago is waiting for you”.

This is the motto of this double Holy Year 21-22, which invites all Christianity to go on pilgrimage to Santiago de Compostela at a very special time for the pilgrim community. Because every Jubilee Year offers us everything: the spirituality that involves celebrating the Apostle St. James, attending the special masses, contemplate the botafumeiro flying, get the plenary indulgence, to enjoy the cultural program of the Xacobeo and, what interests us in this article, visit, get to know and cross the threshold of the Holy Door of the Cathedral of Santiago, which only opens in Holy Year, whether ordinary or extraordinary. Shall we go in? 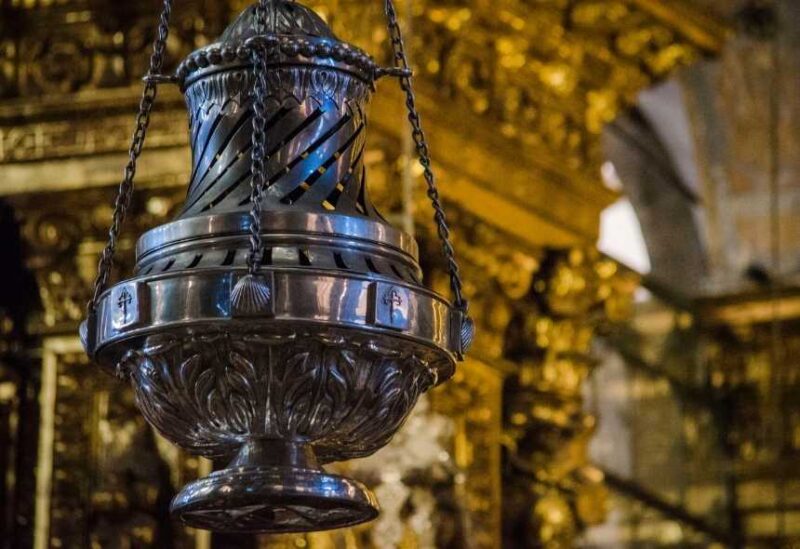 Formally, it is nothing more than an access to the Cathedral through the apse. An access from the east that adds to the west access of the facade of the Obradoiro and the Portico de la Gloria, the north of the facade of Azabachería and the south of the facade of Platerías. The difference is that this access only opens in Holy Year, when the 25th of July, feast of the Apostle, falls on a Sunday, and once concluded, it closes until the following Sunday.

Located therefore in the Quintana de Mortos Squareis preceded by the baroque covering of the Cathedral of Santiago, with an exterior façade crowned by the Apostle and his two disciples Theodore and Athanasius, as well as flanked by 24 sculptures of prophets and apostles from the stony choir of Master Mateo, placed there in the 17th century. 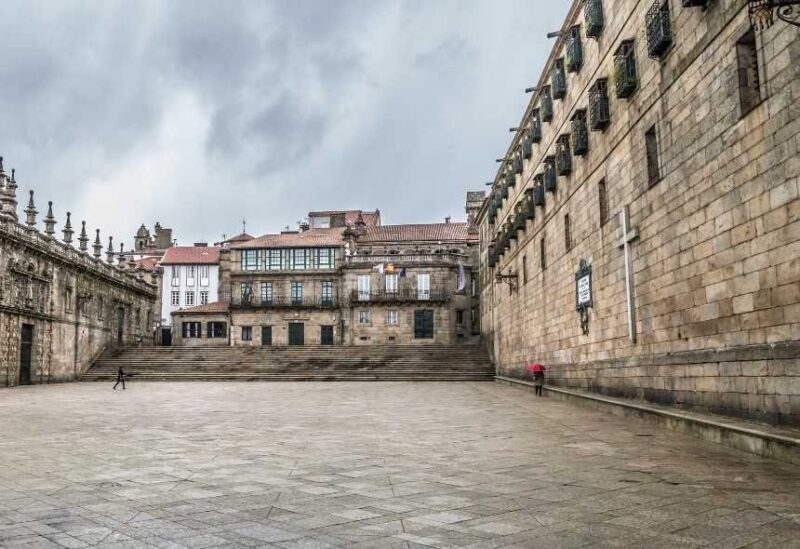 Crossing this façade, a corridor leads us to the opening of the door itself, whose leaves today are not the original ones. Opened internally between the chapels of the Saviour and Saint Peter or of the Azucena in the ambulatory of the cathedral, its origin is uncertain: one hypothesis holds that it is an attempt to emulate the Holy Door of Rome and its Jubilee, and would be built in the sixteenth century, and another talks about acommunication passage between the Monastery of San Paio de Antealtares and the basilica, thus dating back to the 12th century.

The door itself, with its current leaves, shows the history of Santiago in the form of vignettes, as if it were a comic book. In 1992, the Galician sculptor Francisco Leiro decorated some leaves with the episode of the Traslatio, while in 2003, the sculptor from Santiago de Compostela, Suso León, decorated it with six reliefs about the life of Santiago, from the time he is “recruited” by Jesus until he is buried in Galicia by his disciples. The interior is completed by two baptismal fonts and two statues from the old stone choir, as well as two crosses. Finally, at the top, an inscription reads “it is the house of God and the gate of heaven” (Genesis 28:17).

“I have opened before you a door that no one can shut,” as the Apocalypse quotes (3:8).

Indeed, this door is not just a functional interior design. To quote Jesus of Nazareth himself in the Gospel according to John, “I am the door, if one enters through me, he will be saved”, and his words can be applied symbolically to the Holy Door itself. Also known as the Gate of Forgiveness, crossing its threshold is one of the requirements to achieve the plenary indulgence. It is a direct access to the main altar and to the Tomb of Santiago itself, a symbolic route in which the believer performs a rite of passage from an old life of sin to one of renewal. In relation to the pilgrim, the Holy Door would be a metaphor in which suffering and renunciation make it possible to reach the door that leads to God.

On the day before its opening, the Traslatio de Santiago Apostle is celebrated, with a special mass and the flight of the botafumeiro. And on the day of its opening, the ceremony is led by a liturgical procession that starts at the Platerías gate and heads towards the Quintana, where, after reading the pontiff’s message, the rite of opening the Holy Door takes place. The Archbishop of Santiago is in charge of carrying it out, knocking three times with a ceremonial hammer on the door. Once it is open, the Archbishop and his retinue enter first and walk through the interior of the Cathedral up to the main altar, where the solemn Mass of Thanksgiving is celebrated. As a final climax, the botafumeiro flies.

And she is not the only one…

Santiago de Compostela is not the only holy door in the world, and in fact we have already mentioned the Holy Door of Rome, in St. Peter’s Basilica in the Vatican. The Roman Jubilee is celebrated every 25 years, the first one dating back to 1300, by the will of Pope Boniface VIII. Of course, there is an opening liturgical ritual, just like in Santiago de Compostela. We can find three other holy doors in Rome, namely those of the papal basilicas of St. John Lateran, St. Paul Outside the Walls and St. Mary Major. 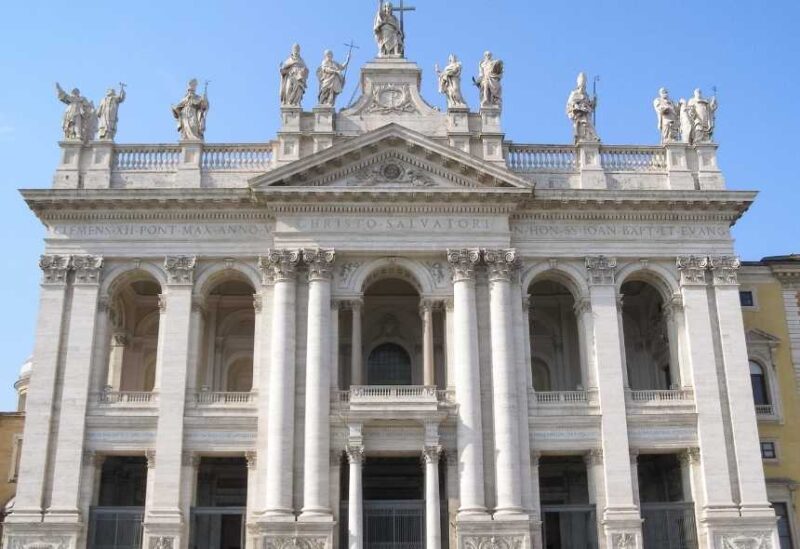 Returning to the Camino de Santiago, in Villafranca del Bierzo we find another Jacobean holy door, the Puerta del Perdón of the church of Santiago Apóstol. Like the one in Santiago de Compostela, this gate only opens in the Jacobean Holy Year, and since the Middle Ages, Popes Calixtus III and Urban II granted the privilege of granting the Jubilee to pilgrims who, for health reasons, could not reach Santiago de Compostela. In 1999 six pilgrims obtained their Jubilee here, in 2004 there were only four, in 2010 there were 48 and in this year 2021, only one so far.

The Franciscan monastery of Santo Toribio de Liébana (Cantabria) has in its church another holy door or Door of Forgiveness, which is the main door and is only opened in the Lebaniego Holy Jubilee Year, when the day of San Toribio, April 16, falls on a Sunday. 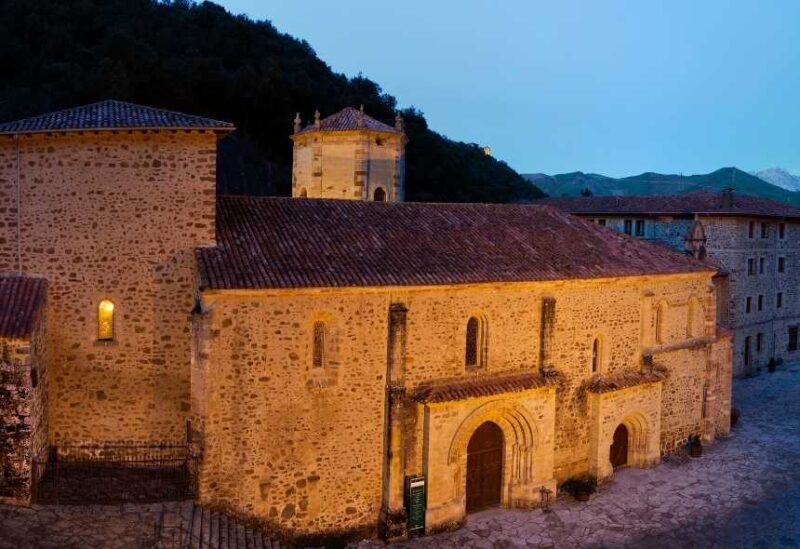 A year of open doors

As you can see, we have a free way on the pilgrimage routes, and in particular on the pilgrimage routes to Santiago de Compostela, because their holy doors are open. Of Jacobean inspiration, although not official but very special, is the Door of Forgiveness that we can find if, making the French Way of Saint James we make a stop at Aunt Dolores House a refreshing oasis for pilgrims at kilometre 30.849. In this way, you will be able to pass through at least three holy doors on your Camino de Santiago, open in this Holy Year 2021 and 2022 for the forgiveness and joy of all pilgrims.