The Camino de Santiago and its different routes would not exist without the pilgrims who travel to Santiago de Compostela, as they are the ones who give it meaning as protagonists of the Jacobean event. On the different paths you will meet pilgrims of flesh and blood like you, but also pilgrims of flesh and blood like you. many sculptures that, as a tribute to his figure, are erected in some emblematic points of the route.. In this article we will learn more about some of the main sculpturessome more recent than others, that you will find on your pilgrimage to Compostela..

Sculptures on the French Way of Santiago

We are heading to Roncesvalles, at the beginning of the French Way of Santiago in Spain, where you can contemplate the sculpture called “Stele of the Way”. Located in the gardens of the Royal Collegiate Church of Roncesvalles, it is a a work made of cut steel by the Navarrese sculptor Faustino Aizkorbeby the sculptor Faustino Aizkorbe from Navarre.inaugurated on 31 May 2013. It is an abstract work due to its its spiral shape, representing the movement involved in the pilgrim’s journey.. In addition, the irregularities of the spiral ribbon tell us about all of the those experiences, both good and bad, that we can experience on the pilgrimageand even the irregularities of the relief that the pilgrim encounters during the journey.. Different notches in the ribbon represent the stages that, little by little, lead the pilgrim to the centre, to Santiago de Compostela, an empty vertex that each one will fill during his pilgrimage experience..

So says the monument that we find if we advance towards Santiago de Compostela, a mythical sculptural ensemble on the Camino de Santiago, the Monument of the Alto del Perdónerected at more than 900 meters above sea level. They are several sheet metal figures depicting pilgrims in different periods of timeaccompanied by horses, mules and even dogs. Installed in 1996, it is the work of Vicente Galbete, and from here you have one of the most important panoramic views of the French route.

Further on, in Santo Domingo de la Calzada, you can visit a curious sculpture, “Aperos del Peregrino”.Aperos del Peregrino“located at number 31, Main Street. In it we see the set of elements that identify the pilgrim and are necessary for his journey, such as a pair of boots, a backpack, a walking stick, the scallop shell and even a bicycle, also paying tribute to the “bicigrinos”. In the same town you can find the more classic Monument to the Pilgrimin front of the Parador of the town, a work made in 1971 by the sculptor Vicente Ochoa.

We continue walking and in the Plaza del Rey San Fernando in BurgosAt the foot of the cathedral, at the foot of the cathedral, you can find a beautiful bronze statue of a pilgrim. Made by the sculptor from Burgos, Teodoro Antonio Ruiz, it represents a pilgrim restingas he sits on a bench sitting on a bench with the cathedral behind him.. A good tourist attraction, because you can be photographed sitting next to him and with the beautiful panoramic view of the square and the cathedral of Burgos.. Very close by, in Fernán González street, you can find another sculpture that represents a pilgrim taking care of his feetin a classic scene of every self-respecting pilgrim. 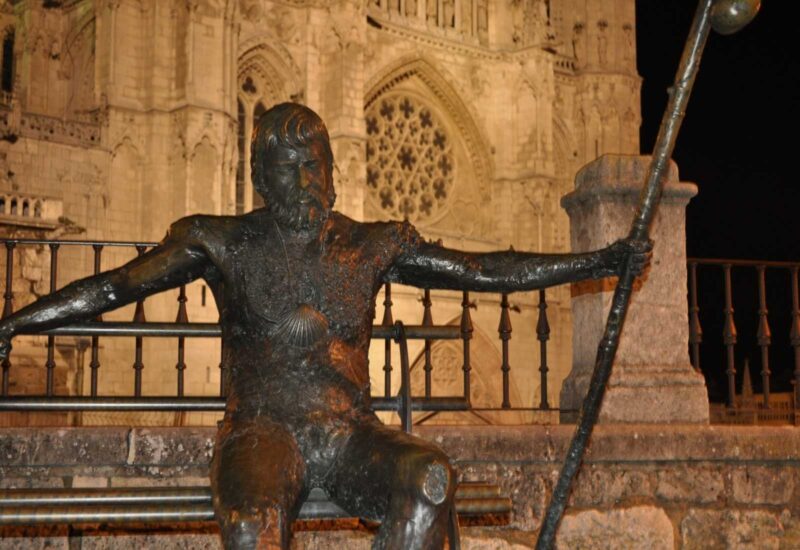 We continue our pilgrimage, and, at the Castle Gate of Mansilla de las Mulas we will find another Monument to the pilgrim, a stone cross in which, at its feet, we can see three pilgrims resting.. In this sculpture, work of the sculptor Ángel Muñiz in 1998, the presence of a young woman pilgrim stands out.something that is not often seen in these monuments.

Already in León it is necessary to emphasize the Monument to the Pilgrim located in the transept of the majestic Plaza de San Marcos, the work of the sculptor Martín Vázquez de Acuña and inaugurated in 1998. Resting barefoot at the base of the cross, the pilgrim is shown perhaps sleeping, or perhaps reflecting.

Already in Galicia, in the Alto de San Roqueafter passing O Cebreiro, we find the Monument to the Pilgrimat 1.270 meters above sea level. It is the work of the Galician sculptor José María Acuña, installed here in 1993, on the occasion of the Holy Year. Sample to a pilgrim walking who has to hold on to his hat, due to the strong wind that can often be encountered here.

Finally, and common to the Northern Way of Santiago and the Primitive Way of Santiago located in the Monte do Gozojust five kilometres away from Santiago de Compostela, we find an iconic image, the Monument to the Pilgrims. It is about two pilgrims who, before the first sight of the towers of the Cathedral of Santiago, they show their jubilation at the imminent arrival. Like them, every pilgrim feels the same way, and it is an iconic place to be photographed. Installed in the Holy Year of 1993, it is the work of the Galician sculptor José María Acuña. 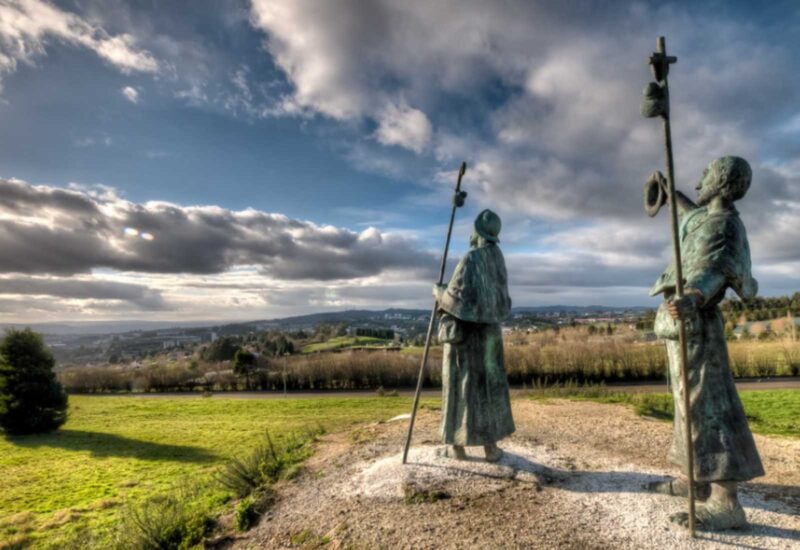 Sculptures on the Portuguese Way of Santiago

On the Portuguese Way of Santiago at the entrance of Tuithere is a sculpture made by the artist Juan Vázquez, which shows a pilgrim resting next to a a pilgrim resting next to a fountain with scallop shells.. At the exit of the city, and next to the Roman bridge of the river Louro or bridge da Veiga, we find a stone sculpture with the silhouette of a pilgrim carved inside, staff included..

Sculptures on the Primitive Way of Santiago

On the first of the routes to Santiago, the Primitive Way from Oviedowe have to highlight a monument that pays homage to all the pilgrims but, specially, considered the first pilgrim in history: it is the Monument to Alfonso II “the Chaste”.. Located next to the Cathedral of Oviedo, it is the work of the sculptor Victor Hevia, made in stone in 1942. In 1965, the city of Oviedo gave a copy of this sculpture to the city of Santiago de Compostela as a gift.We can see it next to the Faculty of Geography and History of the city of Santiago de Compostela. 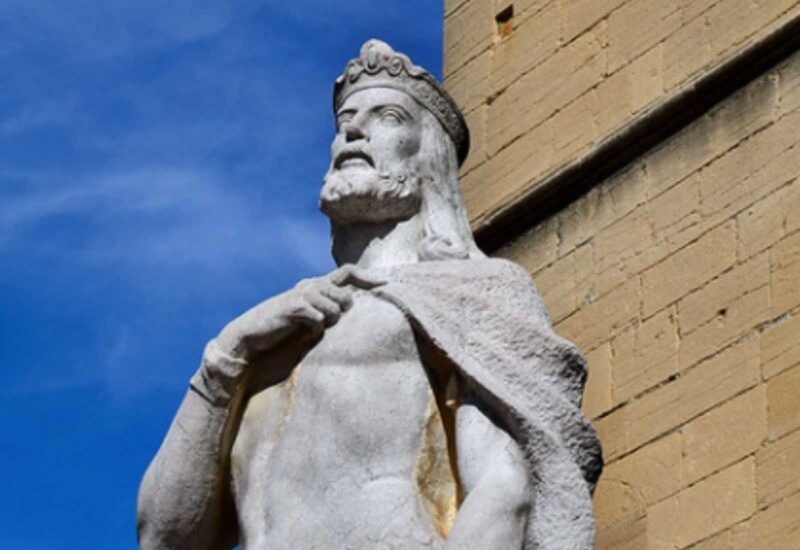 Sculptures on the English Way of Santiago

In the English Way of Santiago In the place of Ardemil, we can see a curious and surrealistic set of sculptures in which, in addition to honoring the pilgrims with a granite sculpture of the Apostle Santiago the Pilgrim, there is a giant dinosaur that can sometimes be found devouring a girl, like King Kong.. An arch with two tractors and other pieces with different figures make this place an obligatory stop for the surprised pilgrims.

If you know of any more, please help us in our private inventory and comment below what other sculptures you know of. And if you don’t know these, we invite you to admire them by doing one of the following Camino de Santiago.