The Christmas lights of the Camino de Santiago are switched on

At the gates of Christmas, all the cities of Galicia are decorated with the typical Christmas lights. Garlands of lights, colorful arches, large Christmas trees, lights on street furniture and other structures are traditionally placed from November, being at the end of that month or early December when they are inaugurated. In this post we want to talk about the Christmas lights in Galicia, which in the case of a certain Caballero, as we will see, are real tourist attractions.

Long before Christmas was declared by Pope Liberius in 354 AD to replace the Roman and pagan festival of the Saturnalia (between 17 and 24 December), Roman festivals already decorated their streets with street lights for the occasion. The night was dangerous in Rome, and in order to celebrate safely, the urban space was illuminated.

We take a trip back in time to the 18th century, when it was customary in upper-class German households to decorate Christmas trees with candles or lanterns. This custom would gradually spread throughout Europe.

At the end of the 19th century, with the development of electricity and electric light, the first Christmas tree decorated with electric light appeared: in 1882 ,Edward Hibberd Johnson, an inventor and partner of Thomas Edison, invented special bulbs for Christmas trees. For this initiative he is considered the father inventor of Christmas lights, didn’t you know? 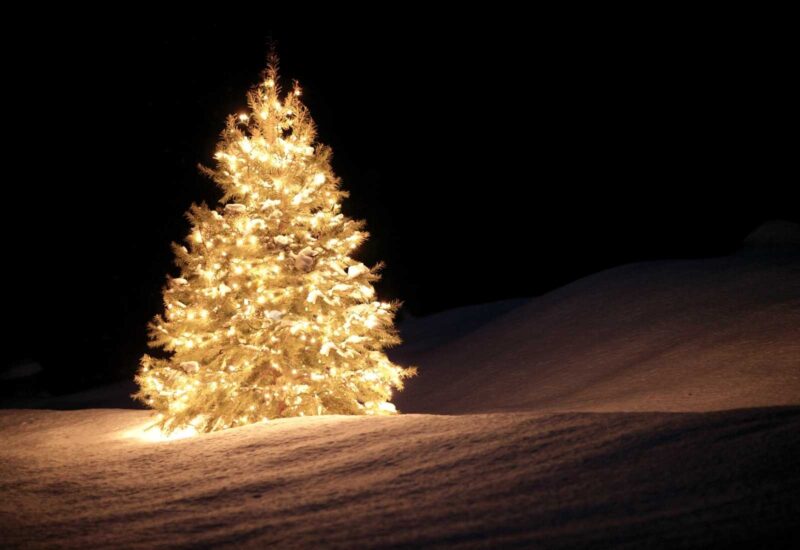 At first it was something expensive and perhaps limited to wealthy classes, and it would not be until the 1930s when this custom would begin to popularize and become more or less affordable to more social classes. Finally, from the second half of the twentieth century Christmas lights become popular and, in addition to homes, would leave them to begin to decorate houses, shops, buildings and streets. A famous example of this can be seen in the American culture, which from the 1960s onwards went crazy decorating their houses. This custom would gradually reach Europe, even as far as Japan, at the end of the last century.

“The night became day because people lit the streets in the best possible way with torches, lanterns…”, explains the historian Néstor F. Marqués in relation to the Saturnalia festivities in Rome. 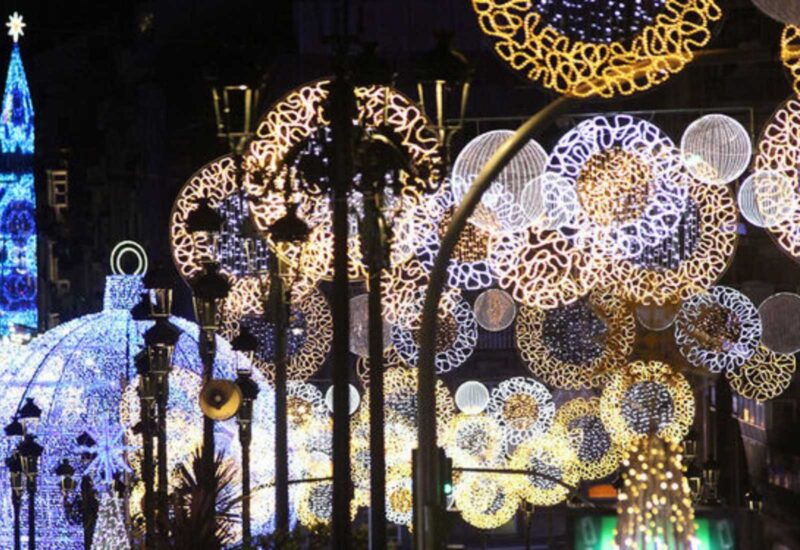 It has nothing to do with it, but it seems that the inhabitants of Vigo have Roman ancestry. Jokes aside, since 2017, Vigo’ s Christmas lights have been crossing the borders of the municipality and are in the news every year, as its mayor Abel Caballero bets very hard by making a strong investment, so much so that it has become a tourist attraction of the first order at Christmas. Since the end of the last century the streets of the city have been illuminated, but what its mayor has achieved in recent years is to offer “.the most important Christmas ever in Vigo. And we are going to witness one of the tourist phenomena that has ever been seen in Spain.”.

“The Space Station has been standing still for a day looking at Christmas lights,” says Caballero.

Hundreds of thousands of euros of public money are invested in millions of LED lights that illuminate the center and the main streets of the city, from Policarpo Sanz, Urzáiz, Colón, Puerta del Sol and Alameda, among other points. Classic elements such as the tree of lights, the Christmas ball, the Christmas market, the snowman, the gift and the lavish Ferris wheel and the lighting in general stand out. All this, of course, of enormous dimensions and well illuminated, as the Romans would like. Of course, the city entertainment is assured with the Nativity Scene of the city, attractions, ice rink, go-kart track and mini karts, circus, inflatables, dinosaur exhibition, children’s train, etc.. As we can see, a very complete program suitable for all ages, and if you make the Portuguese Way of Santiago along the Coast you will pass through Vigo and you will be able to enjoy its Christmas illumination. Inaugurated on November 20th, to know more about the Christmas program click here. 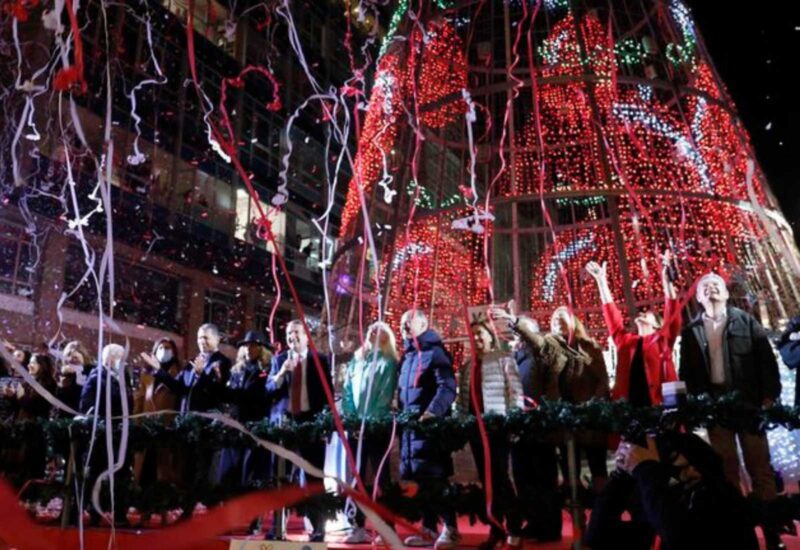 In Santiago de Compostela the Christmas lights do not surpass those in Vigo, but they do have their tradition and classic elements. As if from a Camino de Santiago we talked about, kilometers of blankets of light adorn the historic center and other parts of the city, being the big Christmas tree in the Plaza del Obradoiro a regular in the decoration and Christmas lighting of the Jacobean capital, which year after year does not stop growing.

“Santiago is a jewel that we make it shine,” says the city’s mayor proudly

Light locations in hundreds of places, lampposts and trees, as well as three-dimensional elements delight the compostelanos, tourists and pilgrims who stroll the streets of the capital of Galicia. Of course, the traditional Christmas market, the Nativity Scene in the Plaza del Obradoiro and the traditional one in the church of San Fiz de Solovio, as well as other events, are not missing. Here they come all the ways so if you are a Christmas pilgrim you will be lucky enough to enjoy the Christmas of Santiago de Compostela. Inaugurated last December 3rd, you can consult the entire cultural programme at the following link. 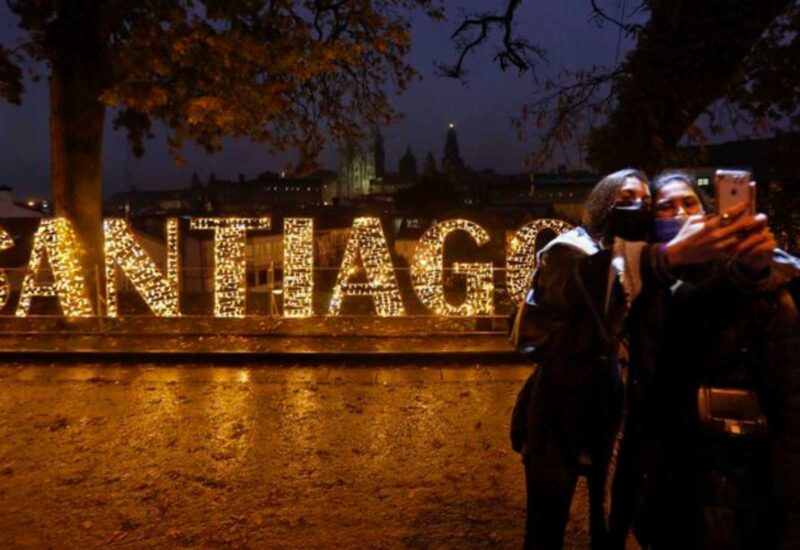 The city of A Coruña also offers its own lighting and is not far behind. Millions of light points illuminate the entire city centre and the historic centre, the main points being the María Pita square, with special lighting, the Obelisk, which is premiered as the location of the Christmas tree of light, as well as the area of La Marina, where the great illuminated ball and the boats with light stand out. Hundreds of arches, squares with illuminated umbrellas and numerous roofs of light intoxicate the retinas of every passer-by. Activities such as workshops for children and adults and lots of music are offered. If you are a pilgrim in the English Way of Santiago you will be able to enjoy this very special lighting in Galicia. Inaugurated last 4th December, you can consult here the full programme of activities.

Lighting your way at Christmas

All pilgrims who do the Camino de Santiago at Christmas are in luck, because they will be able to enjoy all the magic of Christmas and the Camino at the same time. The Christmas lights are always an attraction and for the pilgrims it means a special arrival at the end of the stage. What better than, after resting in your accommodation, pilgrims for the light of Christmas just as the ancient pilgrims sought the stars of the Milky Way to orient themselves and reach Santiago de Compostela.where, in addition to the beautiful facade of the Cathedral of Santiago, you can enjoy all the light of the city and of the very Road to Santiago.