“If there is a place to see, to feel the passage of time, to listen to the silence, to smell the purest nature or to taste the delicacy of the vine, that is Ribeira Sacra: Where the senses are born”. 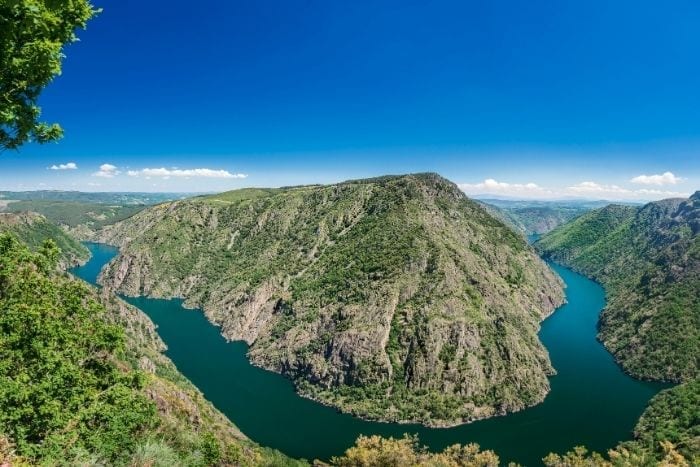 What to see and do in the Sil Canyon

In this article you are about to discover one of the most impressive landscapes not only of Galicia, but we would dare to say of all Spain, we speak of the Canyons of Sil (Canón do Sil).

This is a deep gorge carved by the Sil River near its meeting with another important Galician river, the Miño. A unique landscape that is thrilling to the visitor: canyons more than 500 meters deep adorned with small vineyards on steep slopes that require a heroic effort from the winegrowers.

It is also a land of monasteries, which gave it the name of Ribeira Sacra. Cradle of the legendary wine of Amandi, so appreciated by the Romans that they considered it the true “Gold of the Sil” and that later the Benedictine monks would elaborate exclusively for the cellars of the refined ecclesiastical high positions.

1. Route of the Monasteries

More than 30 monasteries were built in this area during the Middle Ages, of which a total of eight are still standing. Most of them are located in the vicinity of the Sil Canyon.

Located in the town of Parada de Sil, it is striking for its inaccessible location. Although we all know that the monks chose the most remote places for their spiritual retreat. The way to get there is still dizzying, but it is undoubtedly an experience for lovers of hiking, who will enjoy lush forests of chestnut trees just a step away from the river Sil.

The route to get to the Monastery of Santa Cristina from Parada de Sil is perfectly signposted. We leave the link here.

It is one of the most spectacular Romanesque monasteries in Spain. In its construction different styles were used, ranging from Romanesque to Gothic and Renaissance. Today it has been converted into a Parador and can be visited free of charge. Undoubtedly an obligatory stop in the Ribeira Sacra.

If you start your visit to the Sil Canyon from Ourense, we recommend an express visit to this small but peculiar monastery carved into the rock. It is a very ancient enclosure, almost primitive, witness of the first settlements in these lands with a great anthropological value.

2. Viewpoints of the Sil Canyon

Another of the great attractions of the area are its dizzying viewpoints, from which you will get breathtaking panoramic views. We recommend several days if you want to visit them all on the winding secondary roads.