What 9 things can you see in a day in Santiago de Compostela?

The city of Santiago de Compostela is a small stone treasure that no one can miss at the end of all the routes of the Camino de Santiago. Strolling through its historic centre, which has been a World Heritage Site since 1985, breathing in its pilgrim atmosphere in the beautiful Plaza del Obradoiro, savouring its gastronomic delights in the Rúa del Franco and visiting its main museums and parks are all part of what to see in Santiago de Compostela in just one day.

However, there are many places near Santiago de Compostela that are well worth visiting, whether for their natural, historical or artistic value.

If you have a car and you are curious, take pencil and paper, we are going to show you places that you can reach in just half an hour and that will complete your stay in the Galician capital.

By merits that you will know if you visit it, it is one of the most beautiful villages in Spain. Located between the municipalities of Ames and Negreira, about 15 minutes from Santiago, this is a small rural village on the banks of the river Tambre with a beautiful medieval bridge, bathing area, old mills, a pazo, the Chapel of San Blas and picturesque stone houses, which you can see on the same day you pass through Santiago. 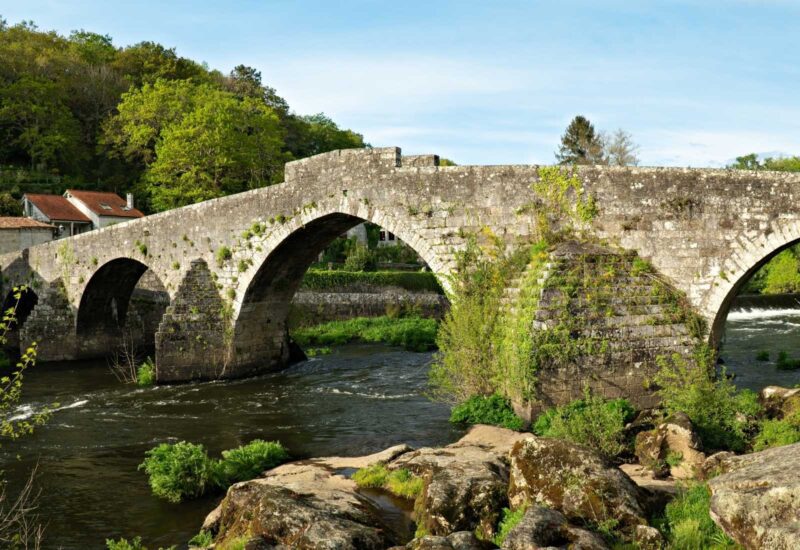 The bridge, from the 13th century and built over an earlier Roman one, allows pilgrims to cross to Finisterre and Muxía. Here we find a legend related to Santiago Apostle: his disciples, Theodore and Athanasius, who were transporting his remains looking for a place to leave them, were fleeing from the Romans and, once they crossed this bridge, divine intervention collapsed it to prevent the persecutors from passing. The coat of arms of the Town Hall of Negreira remembers this episode.

Also just 30 minutes away you will find this historic town on the banks of the river Sar, the municipal capital and practically on the border of the provinces of A Coruña and Pontevedra. Birthplace of the famous Galician writer Rosalía de Castro, Padrón was the birthplace of the last stage of the Portuguese Way as well as the famous Padrón or Herbón peppers, which, as they say in the place, some are hot and some are not.

If you happen to be there on a Sunday, a good option is to visit the traditional market, where you should try the octopus “á feira” in one of the stalls. The neighbouring village of Iria Flavia, where the writer Camilo José Cela was born, and the mythical place of Santiaguiño do Monte, were legendary scenes of the Jacobean history.

Also related to the Jacobean legend is the Pico Sacro, a pronounced elevation of more than 500 metres above sea level, very recognisable from Santiago de Compostela. Being part of the Concello de Boqueixón, in about 20 minutes you can reach the top, where the Chapel of San Sebastián stands. It is of great importance in the geological history of Galicia, as two tectonic plates collided and welded there. Located at the foot of the last stage of the Vía de la Plata, it offers impressive views from its summit.

You can reach Noia, capital of the municipality of the same name, in just 30 minutes by car. Noia rises at the beginning of the estuary of Muros and Noia, the northernmost of the Rias Baixas. 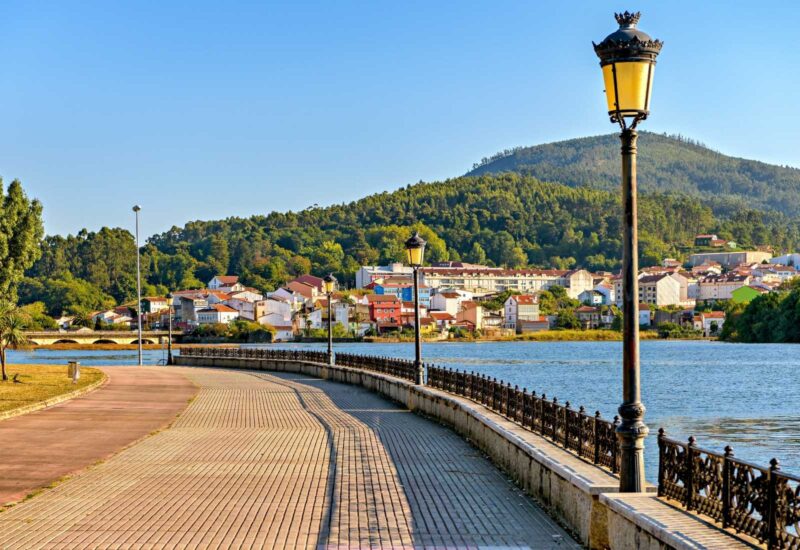 With a small but elegant historic centre, it is worth mentioning the Church of San Martín and the Church of Santa María la Nueva, with its cemetery and museum of guild graves. A pleasant stroll along its boardwalk and an aperitif on its terraces will complete this pleasant visit.

Located about 20 minutes by car in the town of Brión, these are the ruins of a medieval castle belonging to the powerful Moscoso family. Declared an Asset of Cultural Interest, the visit to the place is quick, but it harbours a lot of history as a protagonist in the Irmandiñas Revolts in the late Middle Ages in Galicia.

The closest place to Santiago de Compostela (just 10 minutes by car) and belonging to its city council, are also the ruins of a medieval castle destroyed after the Irmandiñas Revolts. Its stones were reused in other constructions, including Santiago de Compostela and its cathedral. One day it was a symbol of the lordly power of the archbishop of Santiago and today it is in the process of being restored as an Asset of Cultural Interest that can be seen in the area.

It is, for many compostelanos, their particular beach. About 20 minutes by car, it is a recreational and bathing area belonging to the municipality of Ames. If it is a sunny day and you are travelling with children, it is a good alternative to spend the day. It has a cafeteria, car park, green areas, swimming pool and good access to the river Tambre, on whose banks an old mill is still preserved. There is also a canoeing club that offers activities and courses in summer. 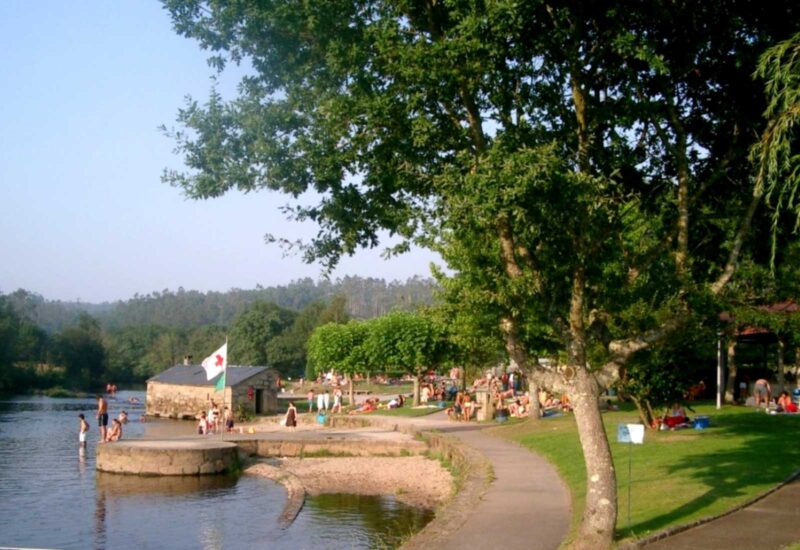 It holds the title of the most visited pazo in Galicia, so it is a must. appointment In the words of the Galician writer Emilia Pardo Bazán, “there are many pazos, the one in Faramello is unique”. At 20 minutes by car, in the town council of Rois, you will find it in the last stage of the Portuguese Way. Its carefully decorated vegetation, its location next to the Tinto River and its French gardens will make your visit a unique experience.

One of the most important Galician pazos is part of the Camellia Route. The gardens are adorned with these trees. Located in the town council of A Estrada, about 30 minutes by car, it is an unmissable visit for flower lovers. It is an Asset of Cultural Interest and some people call it the Galician Versailles. You can visit it visit and we especially recommend you to do it between January and April, the camellia flowering season, a spectacle worth seeing and worth visiting if we go to Santiago for a day. 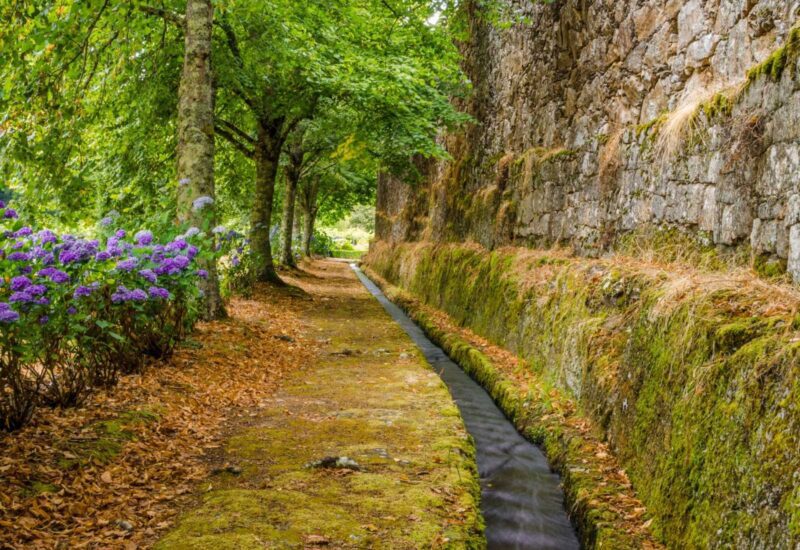