The route of the windmills

In a place in La Mancha, whose name… we are sure you will remember, is the route that every lover of history and culture will want to visit. The places that make up this route are located in different towns and provinces that run through the autonomous community of Castilla la Mancha. These giants that our precious Don Quixote mistook for water mills were once water mills. After the drought in this area where they are settled, they became windy. Nowadays, those windmills that have been restored are used to grind grain, others have become part of history in the form of a museum. They have been preserved and given the importance they deserve thanks to associations that have dedicated themselves to their preservation.

There are many routes of the Camino de Santiago that we can do, but even if what you want is to do another type of route, this itinerary will take you more than a day to travel, the mills are spread over considerable distances but not far due to their size and function. So you will need to take into account that you will need accommodation. You can also do the route by public transport but we recommend (so that you can take your time) that you do it by car. Are you ready to see up close what inspired Miguel de Cervantes back in the 17th century? Here is a summary of the route

This village described by Sancho Panza in the second part of the book has 3 windmills, the first ones you will see if you are travelling along the Madrid-Andalusia motorway. Two of them have been restored from scratch on the old foundations in 2000 and the blades were replaced in 2015. Tembleque had at one point in history up to 6 mills. 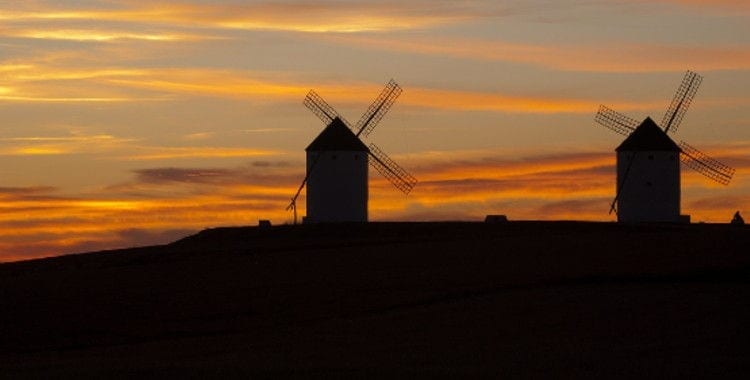 It has 4 mills in very good condition, in fact one of them (The breast) is often used in the Festival of the Mills to grind. These festivities include concerts, dances, choral performances, costume parades and even theatrical performances of Don Quixote. The oldest of the mills is called “Crítica” and dates back to 1852, four years later “Los gorrinos” was built, both are currently used as an exhibition hall. Finally, “Muela” is still a private property. Also in El Romeral there are two museums that you can visit if you want to know its history in depth. 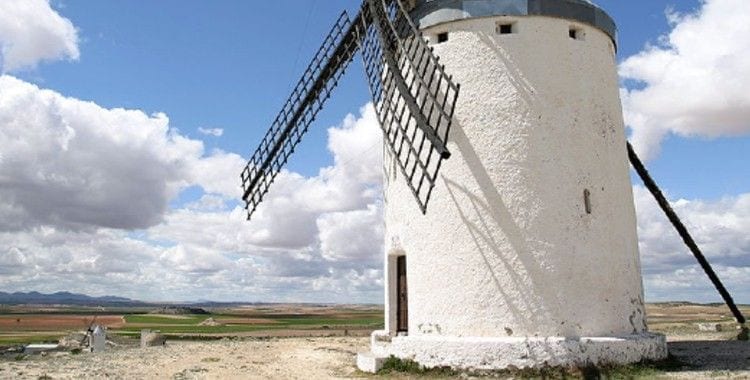 The windmills of this village are the best preserved in Spain. We count 12 in very good condition. At the time of construction there were actually thirteen of them, perched on the Cerro Calderico, from which the extensive view you can have is impressive. After the tour of the mills in Consuegra you will find the Castillo de la Muela, an ancient fortress of the X century of Muslim construction (the best preserved of all Toledo). The names of the twelve “giants” that you will find here are: Bolero(headquarters of the tourist office) Sancho, Rucio (milling museum), Espartero, Mochilas (these in operation), Mambrino, Vista Alegre, Cardeño, Alcancía, Chispas, Caballero del Verde Gaban (gastromolino) and Clavileño. 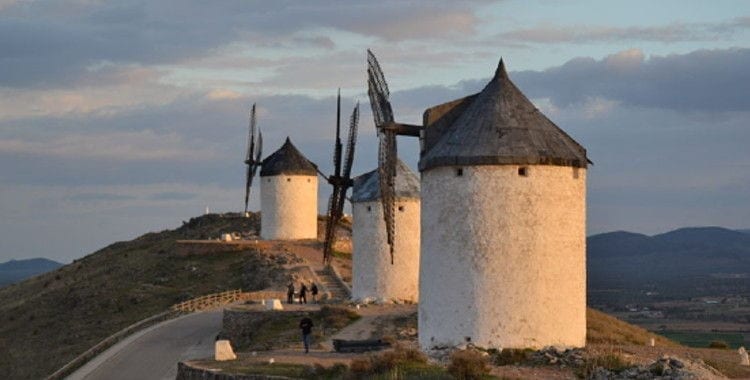 Located in Ciudad Real, it has 7 mills. The first to be built dates from 1790, at which time eleven were built. They arose from the need to supply water to the town reducing costs, previously this came through “La Copa” to the “Fuente del Caño”, both modern monuments that you can visit. The names of the mills are: El Ama, La Sobrina, Dulcinea, Maritones, La Dueña Dolorida, La Duquesa and Teresa Panza. The last four of this list have been restored. 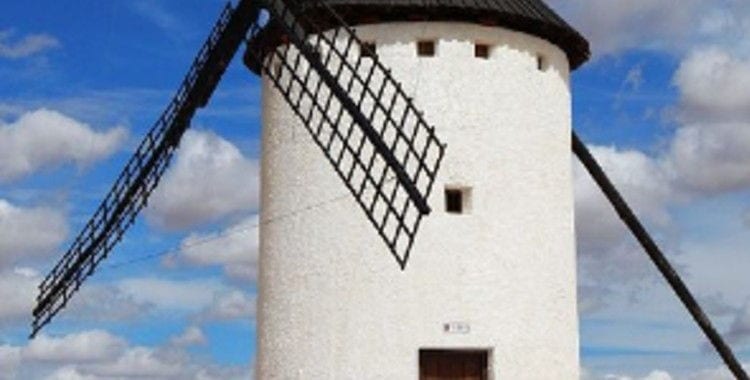 Located on the San Antón hill, you will be able to see 4 of the 19 original mills plus two more water mills. Their names: Rocinante, Barataria, Fierabrás and Barcelona. Two of these mills have been used as museums, one as a Centre for the Interpretation of the Manchego Landscape and the other is the site of the reconstruction of a milling machine from the 19th century. XVI. In the latter, sometimes dated grindings are carried out. The hill of San Antón also has the Cueva del polvorín (used to store gunpowder) and the Canteras, mines reused to hold shows. 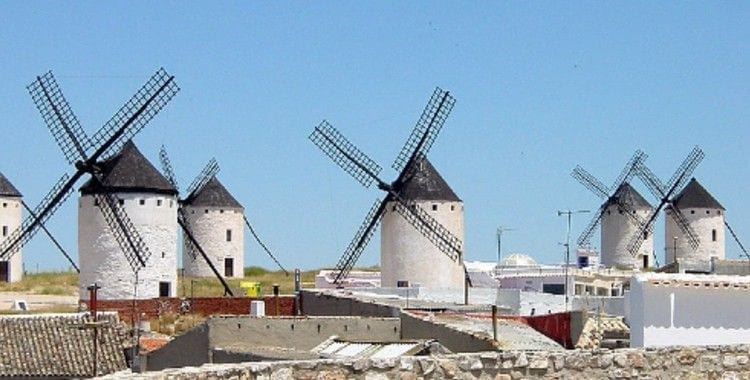 On the Sierra de los Molinos you will find 10, 3 of them dating from the s.. XVI. Declared an Asset of Cultural Interest, these are precisely the ones that inspired Cervantes to write chapter number eight of the first part of Don Quixote. Currently only Burleta, Infante and Sardinero are preserved. The renovated ones that already belong to the s. XX are Culebro, Poyatos, Inca Garcilaso, Quimera, Pilón and Lagarto. The guided tour inside the windmills costs 3 euros. 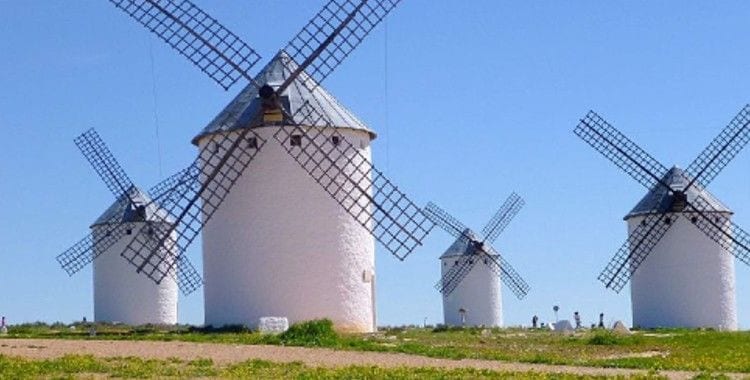 The last place on the road! Located in the province of Cuenca and known for its extensive plain, the hill on which the windmills lie is called the Balcony of La Mancha. Only 7 of the 23 mills are still standing, thanks to the Association of Friends of the Mills. They are El Gigante, El zurdo (their blades turn in the opposite direction to the others.) Cervantes, Piqueras, Goethe, Irak and Franz Grillparzer. 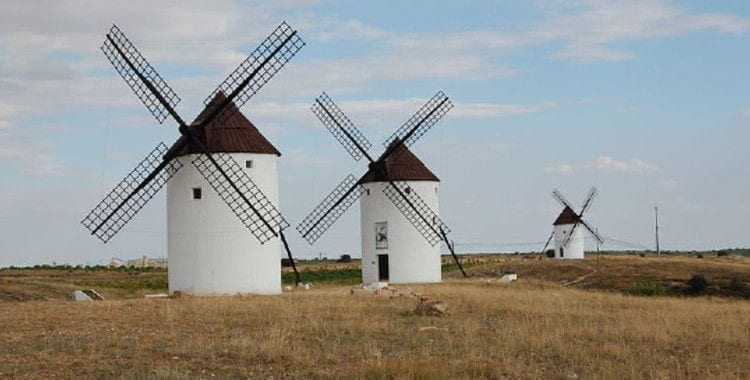 Although we had said that we had already finished with the tour, we want to add one more stop for you. Although there is no mill here, this is a crucial element of the route. Dulcinea, Don Quixote’s beloved, lived here. Her real name was Ana Martínez Zarco de Morales, a farmer from Toboso. His house is now a museum that preserves the furniture and objects intact. General admission costs 3 euros and is free for children under 16, pensioners, unemployed and people with disabilities. We also recommend you to visit the Cervantino Museum which has several editions of the book in different languages and with important signatures. A literary route not to be missed. 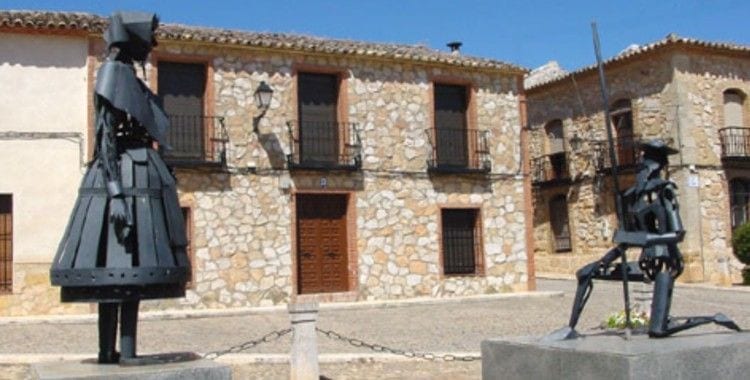