The Route to the Viewpoint of Ordiales is one of the essential that we must do if we go to the Lakes of Covadonga.. This will take us to this spectacular natural balcony located at an altitude of more than 1700 meters from which we will have a privileged view of the valley of Angón, Amieva and Ponga.

Don Pedro Pidal, Marquis of Villaviciosa, and Roberto Frassinelli, “The German from Corao”, were the great promoters of this natural paradise of the Picos de Europa. Such was his love for her that Pidal asked to be buried in the Mirador de Ordiales, where the epitaph on his tomb reminds us of the sublime beauty before us.

Difficulty of the route of the viewpoint of Ordiales

The difficulty of the route of the viewpoint of Ordiales is medium-high because the slope to overcome is more than 700 meters. There are two places from where we can leave:

Departure from Buferrera: distance round trip 20.5 kilometres (about six and a half hours).

Can it be done with children?

Our advice is not to do it with children under 8 or 9 years old as the climb is long and the terrain is rocky.

When we access the Covandonga Lakes we will see how the path on the left goes along the Enol Lake until we go up to the Ercina Lake. Our route begins on the path on the right, where we will start the ascent to the Mirador de Ordiales. 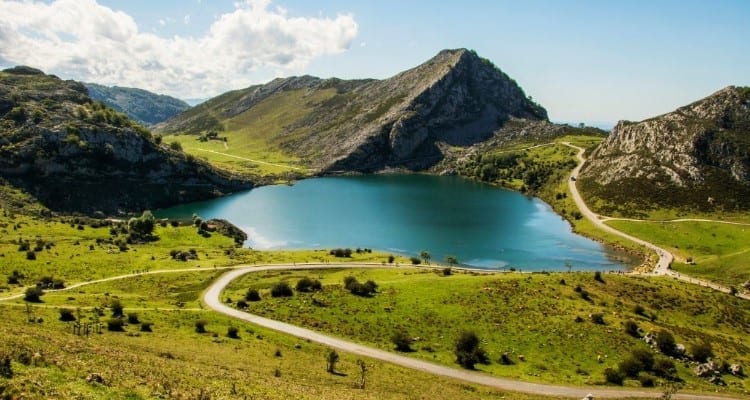 As soon as you leave the Pandecarmen car park We will cross the bridge over the Pomperi River, where we will see the Pozo del Alemán, in honour of Roberto Frassinelli who enjoyed bathing in this small well of about four metres in diameter, and we will notice how the path climbs steeply and narrows.

After a short time we will find one of the most typical sheepfolds of the Picos de Europa, called Vega la Piedra located at an altitude of 1100 metres above sea level. Along the way we will see the cattle grazing or dozing peacefully in the meadows, like the one in Canraso, we will be accompanied by the stones and the green landscapes, and little by little we will reach the Rondiella’s fold and, soon after, we come across from the Gamonal pass with the refuge Vegarredonda to 1450 meters of height We have arrived there after almost 90 minutes of walking.

Behind the Vegarredonda refuge, where we will find a fountain to refill bottles and canteens, follows the winding path that will take us to the Forcau pass through the Cueñe Cerrada channel.

After this area we will notice that the route becomes a little smoother, going down to a jou (hole) that leads us to cross the fields of the Torga and access to the pass of Sierra Pelada where we can see the meadows of Ordiales and Cotalba peak with the Mirador de Ordiales at the bottom.

Before arriving at the Mirador de Ordiales we will come across what is known as the refuge of ICONA (the now defunct Institute for the Conservation of Nature) which has space for seven people and is in good condition in case the fog or other inclement weather surprises us. The Mirador de Ordiales is a natural balcony with a drop of 1750 meters that shows us exceptional views that are well worth the effort of the climb. There, we will find the tomb of Don Pedro Pidal y Bernaldo de Quirós. Together with the shepherd Gregorio Pérez, ‘El Cainejo’, he was the first to climb the Naranjo de Bulnes Peak. He was also the great supporter of the creation of the Picos de Europa Natural Park.

That is why the remains of Don Pedro Pidal have rested at the top of the Mirador de Ordiales since 1949. An epitaph carved in the same stone that has accompanied us all the way. It reminds us of the spectacular nature of what we have before our eyes:

“In love with the National Park of the Mountain of Covadonga, there we would like to live, die and rest eternally, but the latter in Ordiales, in the enchanted kingdom of the chamois and the eagles, there where I knew the happiness of the Heavens and the Earth, there where I spent hours of admiration, dreamy emotion and unforgettable transport, there where I adored God in his works of Supreme Artificer, there where nature truly appeared to me as a temple”. 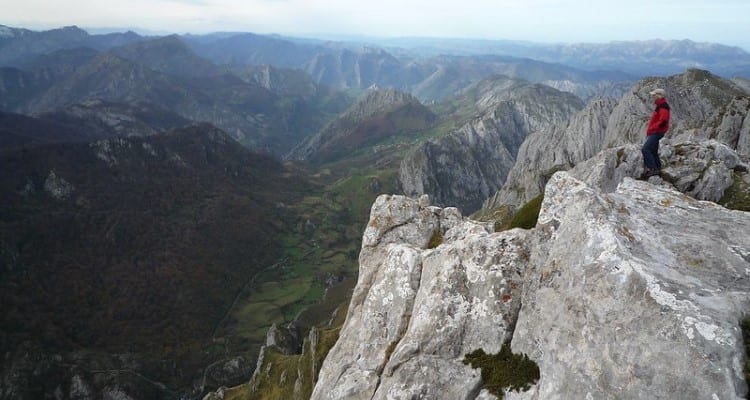 8 tips for the route

1. Organise your visit in advance, find out when you can’t take your car or if there is a sporting event, such as the Vuelta Ciclista (Tour of Spain).

2. Check the timetables of buses to access the lakes by clicking here and book a hotel in advance if you are going to go in times of high influx of visitors.

3. At any time of the year it is advisable to carry a backpack with warm clothes and a raincoat. This route of the Mirador de Ordiales takes us to more than 1700 meters of altitude and the wind blows strong. Also wear hiking boots and appropriate clothing.

4. Take water, some energy drink, and food (snacks, bars) especially if you go with children.

5. This route of the Mirador de Ordiales is not suitable for children under 8 or 9 years old.

6. Carry your mobile phone charged and if you are going to do the route alone, inform someone in case of an accident.

7. If you go with animals, which we do not recommend because of the difficulty of the route, take them tied and controlled.

8. Keep the environment clean and don’t forget to pick up litter.