The Maritime Way of Muros and Noia

There are different ways to do the Camino de Santiago, the most common being on foot and by bicycle. However, sometimes we have had the opportunity to see pilgrims on horseback and in wheelchairs. All these modalities are recognized by the Church and the Pilgrim’s Office of Santiago de Compostela, and, since 2019, the sailing modality is also official. Well, raising anchor and tightening sails, the Camino del Mar de Muros y Noia offers us a very special Jacobean route, a way by sea and with historical justification that gives the possibility of having another perspective of the Jacobean ways.

What do you mean by a Camino de Santiago by sea?

Yes, and it is not an invention. If we go back to the era of the Second Crusade in the Holy Land, in the first half of the twelfth century, there is historical record that many warriors and soldiers committed to the holy war came from northern Europe, and on their journey to the Holy Land sailing along the coasts of Galicia. This was the case with the 200 ships from Great Britain, Burgundy, Flanders and Germany that arrived on the Galician coast in 1147. Before continuing their journey, they usually made a stop in Galicia to make a pilgrimage to Santiago de Compostela and ask the Holy Apostle for help in their risky undertaking. 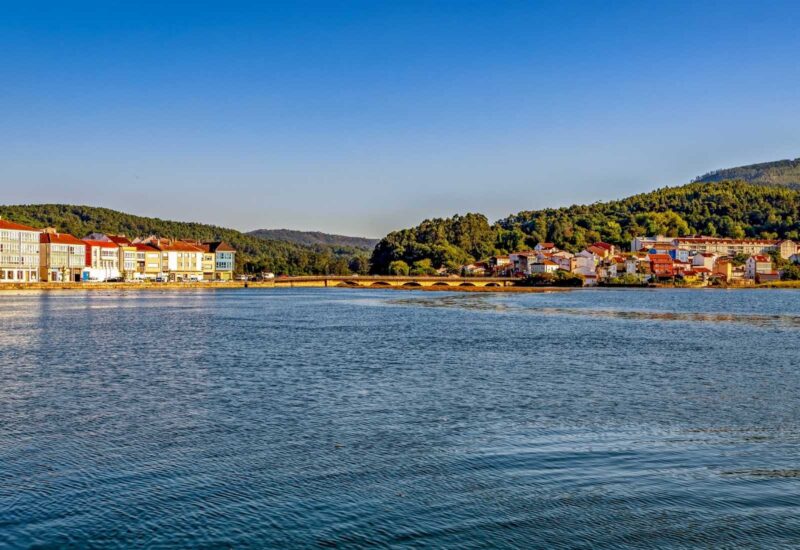 King Ferdinand II of León, whose tomb is in the Chapel of the Relics in the Cathedral of Santiago de Compostela, gave the town of Noia the title of Portus Apostoli thus, its Jacobean relationship was officialized since the end of the 12th century. Later, in the 15th century, the famous Venetian navigator Pietro Querini opened a trade route to northern Europe, but not before docking in Muros to make a pilgrimage to Santiago de Compostela.

The Camino Marítimo de Muros y Noia is a different way to the one you already know, a mixture of sailing and hiking. It involves a sea crossing of at least ninety nautical miles and walking the last twelve kilometers from Bertamiráns (A Coruña) to Santiago de Compostela. This is an official route recognized by the Cathedral Chapter on December 15, 2020, prior to the Holy Year 2021, and which offers the possibility of obtaining the Compostela by stamping twice a day in the ports and in the places where you walk, even with a digital credential.

As the good sea pilgrims that we are, we can recommend a division into five stages, in a mix of three days of sailing and two days of walking:

You can consult the map and elevation profile from Noia on the official website, that is, the last two stages, which are overland. Let’s look at each one in detail. 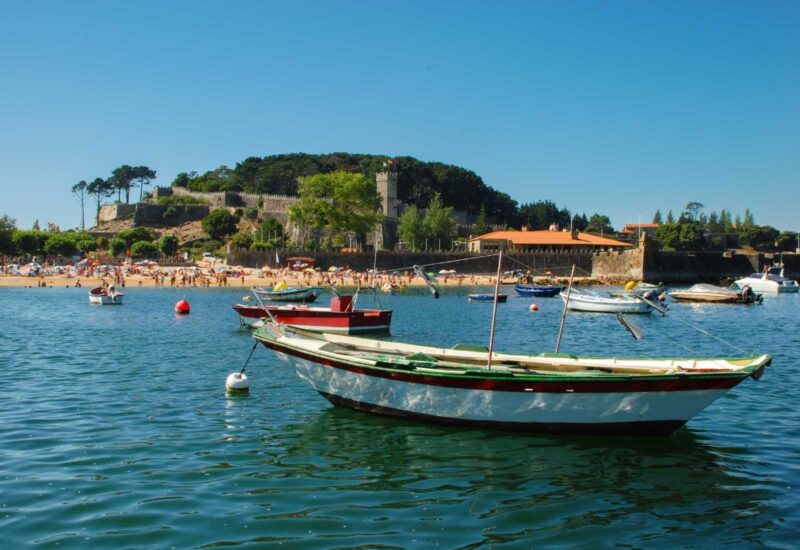 We leave Baiona, a beautiful fishing village that has the privilege of being the first to know the news of the Discovery of America. Closely related to the sea, some of the sailors who survived Magellan and Elcano’s round-the-world voyage were born in this town. We set sail and navigate through the mouth of the Vigo estuary to reach the Cíes Islands. There we can anchor and enjoy the views, a swim or a good meal on board. We continue on to the Pontevedra estuary, with the island of Ons, to finally reach Sanxenxo and anchor or moor in its marina. In this villa we will have all kinds of services.

We leave Sanxenxo, a very touristic town and very linked to recreational boating, towards the beautiful, imposing and jacobean Arousa estuary. The island of Sálvora, the peninsula of O Grove with its sandy facade of the beach of A Lanzada and a lot of rafts await us, which announce a rich gastronomy of seafood. We can anchor off the paradisiacal island of Guidoiro Areoso, for lunch and a swim, and then call at A Pobra do Caramiñal, where we can either anchor or dock at its port. In its urban center we will find all kinds of services. 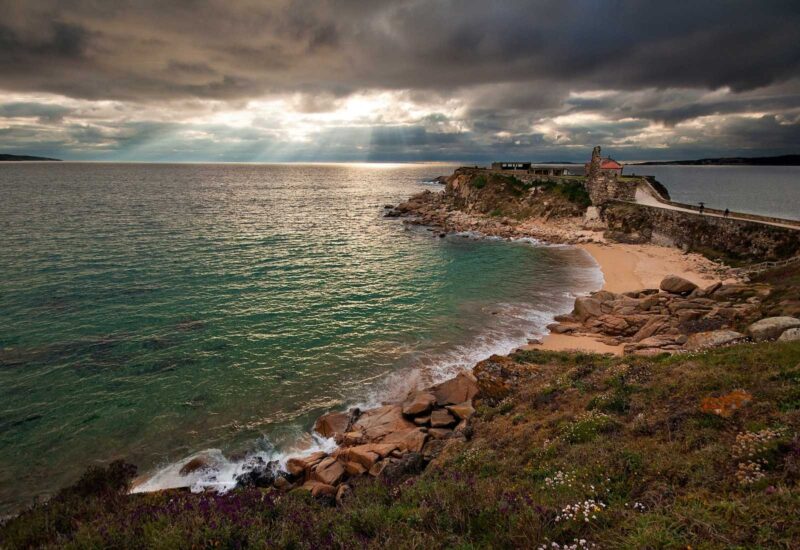 Stage 3: A Pobra do Caramiñal – Noia

This last day of sailing will be the longest, and we will also sail many miles in the open sea. In this crossing we will enjoy the panoramic view of the Corrubedo dunes and its sandbanks, to enter the estuary of Muros and Noia. We can anchor in Muros to enjoy the views and have a quiet lunch, and then continue sailing towards our destination, Noia, which has all the services.

We start our first stage walking, through about 28 kilometers that will take us to Bertamiráns. The first half of the stage will be uphill, reaching almost 500 meters above sea level. Then we will descend passing through different villages, and at the height of Brión we will turn off to Bertamiráns, with all the services. 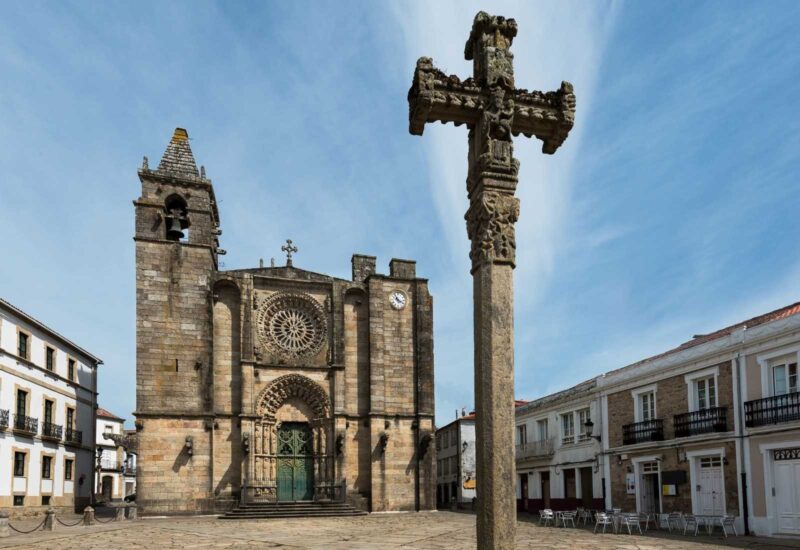 We still have 12 kilometers to go to Santiago de Compostela. It is a short distance, and could be added to the previous stage, but it would be too long. Thus, with this short stage, we will be able to arrive at Santiago de Compostela at a very good time and, who knows, attend the pilgrim’s mass at 12:00 noon.

The crossing is not exactly short, as the ninety nautical miles would begin in the Vigo estuary and go through the estuaries of Pontevedra, Arousa and finally the estuary of Muros and Noia. It could also be reached from the north, through the Cantabrian Sea, in fact there are those who call it the English Way, given the origin of its pilgrims.

The boat can be moored in marinas or even anchored close to the coast, but we recommend that you consult beforehand with Puertos de Galicia.

Once in Noia, you would still have 40 kilometers to Santiago de Compostela, but the 12 kilometers from Bertamiráns would be enough.

The benefits of the Maritime Way

To begin with, the navigation experience itself. If you are not used to sailing the seas, sailing along the coast of Galicia will be an adventure, and you can even go on a pilgrimage alongside dolphins, rays and other marine animals. 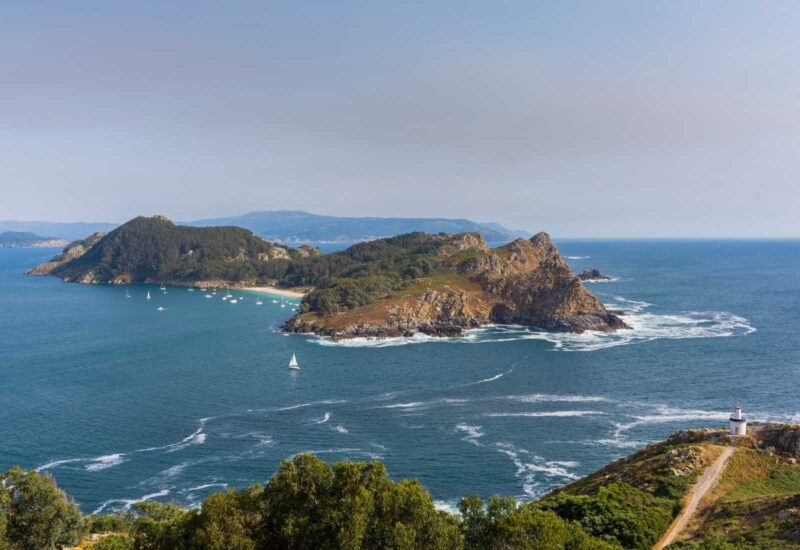 On the other hand, the coastal panoramas taken on board are breathtaking, and whether the sea is calm or rough you will be able to capture beautiful snapshots to remember. You can make stops in unique archipelagos such as the Cies Islands, pilgrim cities like Pontevedra, fall in love with the grandeur of the Arousa estuary and have fun dodging its rafts to finally reach the wild estuary of Muros and Noia, with its historic ports.

We’re thinking… maybe you don’t have a boat. Don’t worry, you can always rent a boat with a skipper that can take you to a good port and learn more about the coast and the sea of Galicia. We can help you with that, cabin boy.