The latest Pilgrim Feats: The Air Force surpasses 100 km in one day

The Camino de Santiago, as you know, can be done in many different ways and in the time you want. You can do some of these ancient routes day by day, all in a row, the most common, authentic and rewarding option, or you can do it in single stages, when you have free days. With an average of 20 or 25 kilometres a day, walking the last 100 kilometres of a route of the Camino de Santiago will take you less than seven days and you will be able to obtain the Compostela.

However, there are “crazy” pilgrims who set out to complete such feats as to cover those last 100 kilometres on foot… in a single day! Yes yes, in 24 hours, 100 kilometers on foot, just as you read it, at an average speed of almost 5 kilometers per hour, with short breaks, walking day and night. 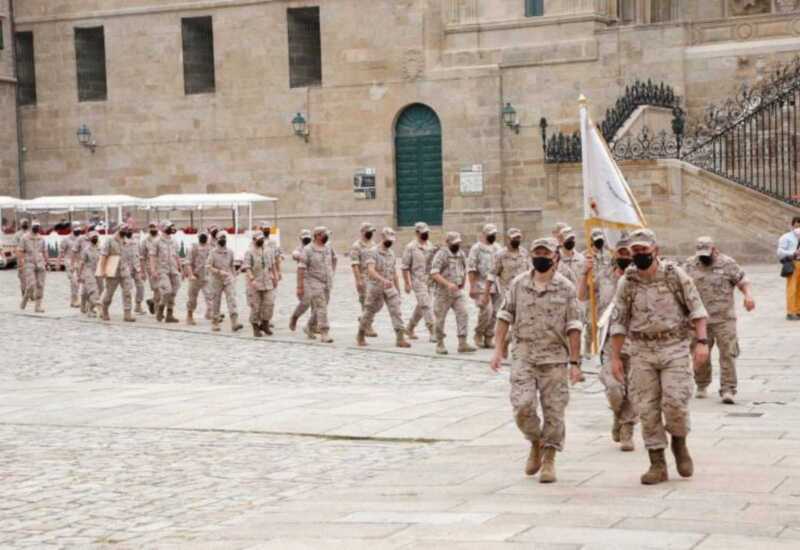 This is what happened this week, when a group of four Air Force soldiers set out to complete in 24 hours the 100 kilometres that separate Lugo from Santiago de Compostela, through the Primitive Way.

Last Monday 7th June 2021, Mónica, Miguel, Juan Diego and Domingo, members of the same military unit stationed at the Military Aerodrome of Santiago de Compostela, were located in the vicinity of the airport “Rosalía de Castro” of Lavacolla, the airport of Santiago de Compostela, left at 11 am from the city of Lugo on a beautiful and sunny day.. In fact, one of the protagonists of this adventure was the strong heat that they had to endure, which, together with the very demands of the challenge, was the main difficulty of the day.

The “walk” was not easy. Dressed in their regulation uniforms, and following the traditional boundary markers with their yellow arrowsThey walked on and on with short 20 minute stops to eat and rest, under high temperatures in the first hours of their journey. Some blisters and a lot of tiredness appeared, as usual, and even one of the members of the quartet, the soldier Monica Zas, had to stop for a small injury, but once rested and cooled down the muscles, she was able to continue her journey.

Once you reach the vicinity of its military base, and taking advantage of the fact that the Primitive Way, once it links up with the French Way in Melide, runs very close to it, a large number of colleagues joined the initiative.with only 12 kilometres to go to the Plaza del Obradoiro. And so they all arrived, being received by the local and regional authorities, in a moment of great emotion, and of course, they received their well-deserved Compostela. 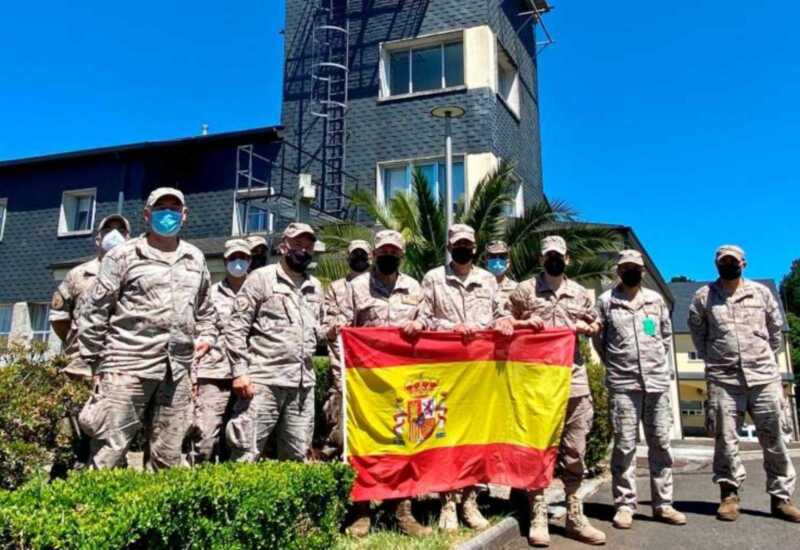 The reason for this challenge was a mixture of personal promises, military values, promotion of the route in the Holy Year and a perennial pilgrim spirit. Xacobeo and a perennial pilgrim spirit. In fact, the motto of this unit is “Support to the pilgrim”, and a peregrine falcon with a scallop is the protagonist of the unit’s coat of arms. As a reward, and as happens with many other pilgrims, this experience has served, in the words of First Sergeant Juan Diego Castro, “to get to know each other better and to bond“, something very important in the military environment and even among the pilgrims.

This is not the only episode of “iron man” pilgrims. The Ferrol Rugby Club in 2014, traveled the 113 kilometers that separate Ferrol from Santiago de Compostela in one day. A score of players, on the occasion of their promotion to the 1st category Galician and as a promise due after this success, toured the English Route. The English route, carrying and passing a rugby ball at a trot and alternating with bicycles. In this case, less than 24 hours, as they left Ferrol at 6 a.m. in the morning and arrived at 8 p.m. in the evening at the Plaza del Obradoiro.with a single one-hour stop at the Albergue de Peregrinos de Bruma, at an average speed of eight kilometres per hour.

We could cite more feats. Many pilgrims set themselves challenges when they do a Camino de Santiago, but a common factor for all of them is to enjoy it, each in their own way. If you haven’t tried it yet and want to enjoy it, perhaps more slowly and over several days, we can help you and make your Camino easier.