Road to San Andrés de Teixido: Devotion and mystery in the north of Galicia

Shall we visit San Andrés de Teixido? We are in Galicia, specifically in the municipality of Cedeira, in full Capelada Mountain Range and near the sea. A small village that curiously was estimated in 2007 to be inhabited by a total of 49 people (29 men and 20 women).

It is very possible that we do not even know how to locate it on a map, but we can assure you that after reading this article we will feel curious to go to know it or to travel some of its routes. Another route of pilgrimage to this village, specifically to its sanctuary, very similar to the Camino de Santiago.

Have you ever heard the saying “A San Andrés de Teixido vai de morto o que non foi de vivo”? (To San Andres de Teixido goes as dead he who was not alive). This village besides being known for its sayings and legends, the most interesting point is its cliffs, being the highest in Europe.

San Andrés de Teixido may also be known as San Andrés de “Lonxe” or San Andrés “Do cabo do mundo” as it is very close to the northernmost point of the peninsula.

San Andrés de Teixido is a small village, but with an infinity of tourist attraction, either for its pilgrimage, its beautiful landscapes, its cliffs, its legends or even for its gastronomy. Next we will detail what you can see, eat or do in this wonderful corner of Galicia.

WHAT TO SEE IN SAN ANDRÉS DE TEIXIDO?

Although it is a very small village, it has many points of interest to visit that will make us fall in love with its nature and its history.

Located in the Sierra de Capelada, we find this village which is known throughout Europe for its high cliffs. These are the highest cliffs, with a height of 612 meters above sea level. The Atalaia de Herbeira is the viewpoint from where you can appreciate the best views of the cliffs.

We will be able to observe birds of prey, wild horses and even cattle in freedom. Let’s not leave behind the flora of this wonderful environment in which we can highlight the herva namoreira or herba de namorar . This village is famous not only for its tradition and customs, but also for the legends that arise from it. One of them is related to this plant, which says that you have to put a piece in the pocket of the person you love, this would inevitably end up together byfate. 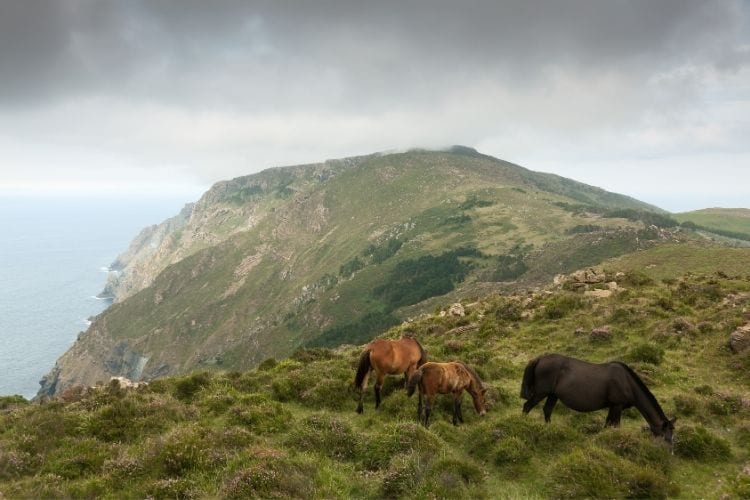 The biggest cliffs in Europe

San Andrés de Teixido offers us a landscape worthy of being contemplated and kept in our retina for the rest of our lives. It is perhaps considered one of the most impressive in Spain. There are several points from which we can enjoy the natural environment of this small village.

The most impressive is from the Vixía Herbeira, located 612 metres above sea level, the highest point of the cliffs. It is an old building made entirely of stone and now abandoned. Another viewpoint to highlight is the Mirador de San Andrés de Teixido, from where you can contemplate spectacular views of the sea and the cliffs, as well as the mythical Barca de San Andrés. Finally we can emphasize the viewpoint of Cruz de Nogueira located at the entrance of the village practically. It usually goes unnoticed but if you have the opportunity do not miss the views it offers. 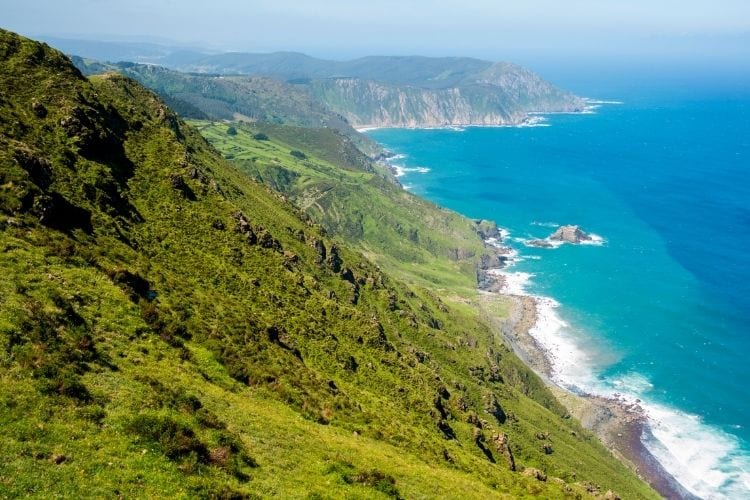 At a much lower altitude, we can find the fountain of the saint with an abundant flow and origin of many beliefs. From there, we will continue walking along the edge of the cliff, arriving at the “peirao”, a narrow littoral plaina narrow coastal plain, where, if the sea is calm, you can walk along immense blocks of granulites and serpentinites that cover the whole area.

If, on the other hand, we find a rough sea, we will be impressed by the crashing of the waves.a true spectacle of nature. As we all know, the green predominates in the Galician postcard, among the species that we can find in this area include for example the yew trees or “teixos” from where the name of this beautiful village comes from.

Not only on land we will observe incredible natural phenomena, but if we look up as we pass by the cliffs, we will discover the impressive birds that fly through the blue skies.such as the peregrine falcon, the carrion crow, the shag, or migratory birds of prey. like the albela eagle.

After the Cathedral of Santiago de Compostela, this sanctuary is the second in Galicia, considered the“Mecca of the Galicians”. A temple that has its origin in the XII century, when there was already news of a monastery in the place, although the church dates from the XVI and XVII centuries and of Gothic-Baroque style of marine typology.

A place full of mysticism, in which, like the pilgrimage to Santiago, it is made from different points to reach the Saint.

A place of power, where legends try to explain the origin of this sanctuary. The best known and perhaps the most important is the saying “A san Andrés de Teixido, vais de morto o que non foi de vivo” . It is believed to have been originated by the jealousy of Saint Andrew with respect to the pilgrimage to Santiago de Compostela. 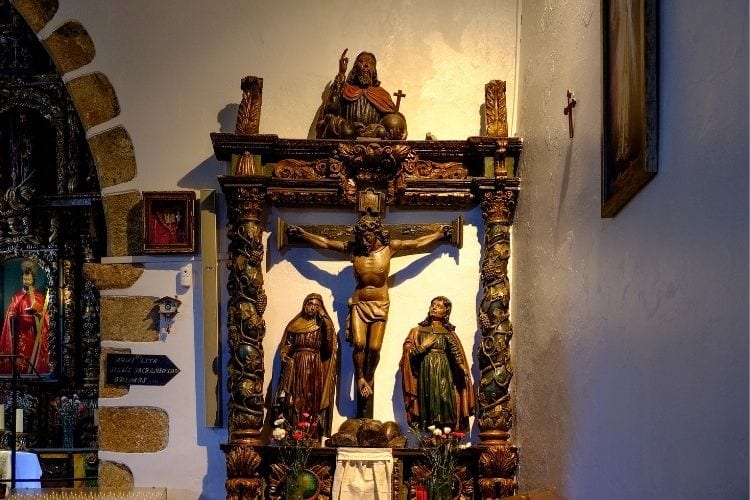 Visit to the village of San Andrés de Teixido

One day he received a visit from God who, accompanied by St. Peter, listened to his complaints. The promise he made him to change his situation was that from that moment on all mortals would come to his sanctuary and that if they did not do so in life, they would do so in spirit, after death.

Numerous are the legends that try to explain its origin, perhaps the second best known is that of A Barca de San Andrés . It tells that the apostle came to this place by boat and that when he arrived he crashed against the cliffs until he overturned. The boat was supposedly petrified, and today we can see from the viewpoint outside the Sanctuary a rock in the shape of a boat.

A sanctuary in which the Christian cult of St. Andrew is mixed with pagan rites and pre-Christian traditions, such as the belief that the reptiles and insects that you find along the way are souls on pilgrimage that do not deserve to rest until they have visited it. 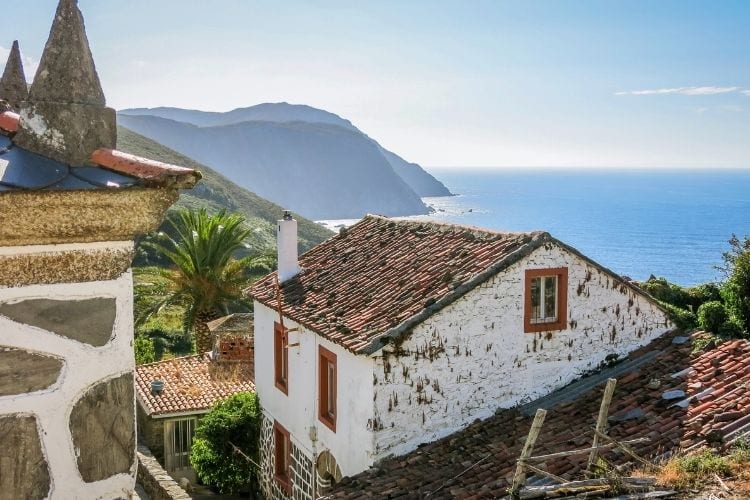 We digress to explain what the famous sanandresiños are. An offering that we will see if we decide to visit the sanctuary. They are handmade by the women of the village, and although they are offerings, they have become souvenirs at the same time. The material is curiously breadcrumbs and they are painted in bright colours. There are several forms, all of them related to the saint and his legends:

The Hand: To ask for love, good company and friendship,

El Pez: For work and sustenance,

The Saint: For physical and mental health, and good fellowship.

The Thought: For studies and against envy and evil spells,

The ladder: to reach paradise, etc.