An alternative to the Pyrenees pass. Discover the Baztanes Way

The Camino de Santiago Baztanés or Camino de Santiago de Baztán is a Jacobean route not very well known among most of the pilgrim community, although equally (or more, if possible) fascinating than any other route. With justification and historical tradition, it is an alternative to crossing the Pyrenees for all pilgrims coming from France, linking the French city of Bayonne with Arre and Pamplona through almost 110 kilometers. Let’s learn a little more about this beautiful route that runs through the valley of Baztan, from which it borrows its name, its green countryside and very interesting heritage landmarks.

The Baztanes Road in history

As we know, there are as many roads as there are origins of pilgrims. In this case, the Baztanes Road The first was for pilgrims arriving by boat to Bayonne from northern Europe, and the second was for those who were diverted from the Via Turonense, which started in Paris; we say diverted, because the Turonense was a route that crossed the Pyrenees at Saint Jean a Pied-de-Port, where they joined the classical The French Way of St. James but many pilgrims preferred to cross the border by a gentler and less demanding route through the mountain passes of Otsondo and Belate. 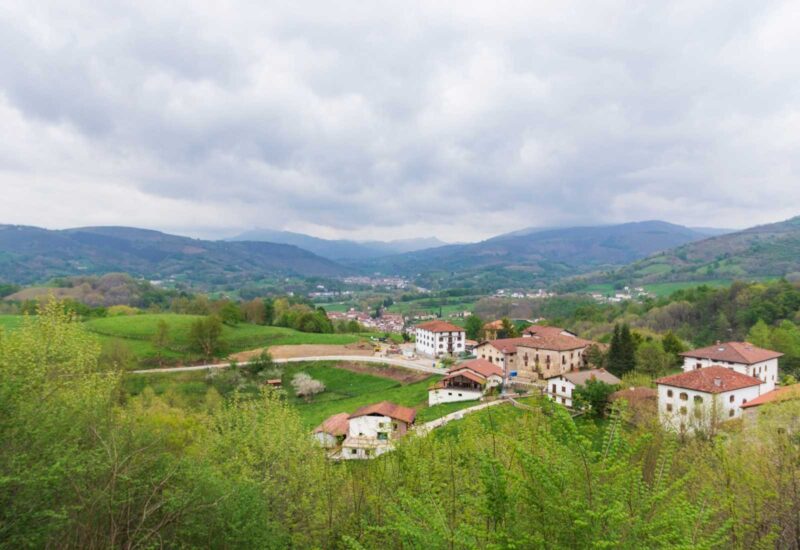 Thus, this route would reach the French Way of St. James in Arre, just 5 kilometers from Pamplona, passing through towns such as Urdazubi and Belate, among many others, thus establishing itself as another alternative route through the western Pyrenees.

The stages of the Baztanes Way

As always, everyone can make their own division of stages, but following the official website of Tourism of the municipality of Baztan, we can establish the division that we propose below.

The adventure begins at the gothic cathedral of Bayonne, where you can stamp your credential. We headed for rue d’Espagne, whose name is proof of the correct address. We cross the La Nive river, which we will take on the left. We follow the signs, which for now will lead us in the direction of St. Jean a Pie-de-Port. We follow the meanders of the river and pass by an equestrian center where we will find some services, but the last one until we reach the end of the stage. We continue until we reach Portuberria, near Villefranque, and pass by Nôtre Dame de la Nive, near Herauritz. Already in Chemin Leihorrondo we will be at the gates of Ustaritz, our end of the stage, where you will find all the services. 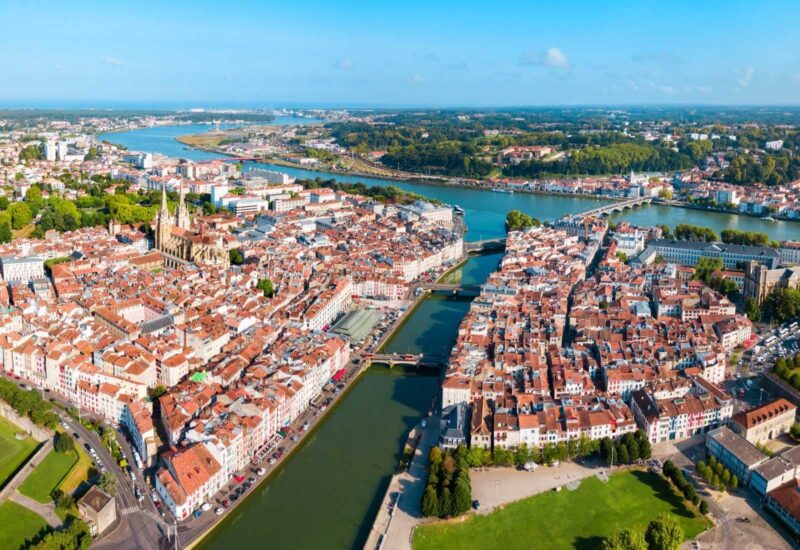 In this stage we will leave the course of the river La Nive and France, to enter Spain, enjoying the last kilometers of the Gallic region of Aquitaine. You will walk through the green meadows where the famous peppers of the village of Espelette are grown to reach Souraide, with a strong Jacobean tradition, which will mark the beginning of the ascent to Pinodieta and its Erebi mountain. We arrive in Spain through Dantxarinea, where we will have all the services (we recommend to stock up, because for example in Urdax there are no ATMs). We continue and in Urdax we can rest like a real medieval pilgrim in the hostel of the Premonstratensian monastery.

You will access the large municipality of Baztán ascending to the Otsondo pass, where it is easy to get caught up in the mist. We descend the valley towards Amaiur / Maya, and continue along ancient roads and bridges to reach the hermitage of Santiago in Urrasun. We will pass through Ordoki and Arizkun, with a beautiful 18th century convent. On the final stretch you will pass through Bergara and walk parallel to the Baztan River. In Elbete, at the gates of the end of the stage, there was a hospital for travelers, the poor and pilgrims. We continue on to Elizondo, with all the services, a lot of devotion to St. James and… a paradise for chocolate lovers! Yes, a very short stage, but with a lot of ascent. You will pass through Lekaroz and Irurita, the second most populated town in Baztan, with magnificent civil architecture and several services. Step by step the road ascends to higher altitudes, reaching Zigaurre and its hermitage of San Andrés. Afterwards, you will be able to contemplate some fascinating panoramic views at the viewpoint of the Baztan Valley and then you will access Ziga, where the Herrerian parish church of San Lorenzo, nicknamed by the locals as “The Cathedral”, stands out. The last steps will take us to Aniz, to finally rest in Berroeta.

You leave Berroeta descending towards Almandoz, where you will arrive in ascent and which has a restaurant in the Galtzaga palace, from the XVIII century. It continues uphill to reach Venta San Blas, where in its inn you will feel the spirit of the old walkers. You will continue ascending towards Mount Larrondo and Mount Arluz, to reach the maximum altitude of almost 900 meters above sea level in the Alto de Belate, where you can visit the hermitage of Santiago. It continues to reach Lantz, with several services. There are only five kilometers left to reach Olagüe, where you can finally rest. Leaving Olagüe you will head towards Leazkue, with its church of the Ascension. Descending you will reach Etulain, Burutain and Ostiz, with a bar and several 16th century houses such as Casa Iriartea and Casa Gartxotena. Passing valleys and rivers more towns await, such as Olaiz and Sorauren, the latter with a restaurant. You will continue through the fluvial park of the Ultzama river and shortly after you will see the industrial park of Ezcabarte, to finally reach Arre and its medieval bridge of the Trinity, where you will connect with the pilgrims of the French Way of St. James and you will arrive at the beautiful Pamplona. Of course, you will have at your disposal all the services, monuments and charm of the beautiful capital of Navarre.

The Urdax-Baztan Trail, as it is also known, is only recommended for hikers in good physical shape and accustomed to mid-mountain trails. It is not particularly complicated or demanding, but there are rocky and very technical trails, and in rainy weather they get muddy easily (gaiters are highly recommended!). If you have done the Primitive Way of St. James the Camino de Santiago Primitivo, it is very similar to it in its first mountain stages.

In general it is well signposted, although from Olagüe onwards it is not so well signposted. In France, small yellow stickers indicate discreet but adequate signage. Once in Spain, the stickers are converted into paint with the familiar yellow arrows. 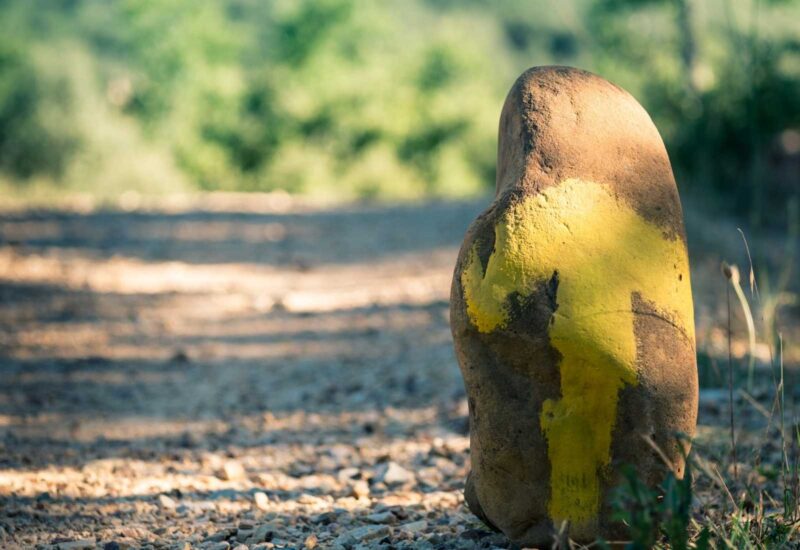 During the route, you will find places with shelters and services at the end of the stage, although at intermediate points during the journey you may not find bars and other services, so we recommend that you go stocked with water and food.

In recent years, the number of pilgrims has been growing, although their numbers do not reach those of the official routes. However, all its exceptional natural and cultural heritage, its signage, its shelters and gastronomy make this road not worth walking.

Walking through the “Navarrese Switzerland”.

This is how some people describe the Baztan valley, with a mixture of meadows, beech forests, oak groves, rivers and an endless number of monuments, as well as a lot of chocolate. Forgotten for many years, the Baztanes Way has risen from the ashes like a phoenix, perhaps because of its smooth and delightful route and the unusual beauty it offers to the pilgrim. A valley and a road with all the essence of the Camino de Santiago and the magic of the Middle Ages, and in its paths you must be attentive, because tradition places in these places witches and agotes, of which it was said that they smelled very bad and that where they put a bare foot would not grow grass again.