A stop at the height of the best pilgrims: La Cruz de Ferro

One of the elements with the most history and symbolism of the Camino de Santiago is the Iron CrossAlso known in Leonese as “Cruz de Fierro”, which in Spanish is the “Cruz de Hierro” (Iron Cross). Located on the French Way on the stage that goes from Foncebadón to Ponferrada, it is located between Foncebadón itself and Manjarín, and belongs to the municipality of Santa Colomba de Somoza (León). From here, it is 230 kilometres to the city of Santiago de Compostela. This area is also known as Monte Irago, an ancient place name that is already mentioned in the Codex Calixtinus (12th century). It is a very special place and landmark of the Camino de Santiago, as it separates the great northern plateau from the hills of El Bierzo and the subsequent entrance to Galicia, with a change of scenery that encourages the pilgrim to continue.

A unique cruiser and humiliator

It is a cross, that is to say, an iron cross that crowns a wooden post five metres high, at the foot of which there is a humilladero; a group of stones that would have its origin in ancient times. As it is in a high place, some theories suggest that it was an orientation milestone from Roman times, in an area where snowfall makes visibility and traffic difficult. It is even believed that here there would be a temple dedicated to the god Mercury, defender of travelers.

Over time, and as is usual in history, the place would be Christianized as the French route of the Camino de Santiago was gaining strength in the Middle Ages, with the advance of the Christian Reconquest of the Iberian Peninsula. It is attributed to the monk Gaucelmo the placement of the Cross of Ferro as well as the construction of a hospital for pilgrims: it is about a hermit of the 11th century with a great vocation for hospitality and who did not intend anything else but to guide and assist the pilgrims. As for the humiliadero, there are different theories about its meaning. Shrines are the result of a symbolic action of man and we can see examples in many cultures. It could refer to an offering that the walker and/or pilgrim makes, materialized in a stone or pebble, as a token of gratitude and a reminder of passage. It could also represent a request for divine protection, or a liberation from problems and even sins.

Not only pilgrims, but also Galician peasants who, between the 18th and 19th centuries, travelled to Castile for the work of harvesting the fields, and when they passed through the Ferro Cross they also deposited a stone. Already the geographical dictionary of Pascual Madoz, in the mid-nineteenth century, in relation to the act of throwing stones states that “rare is the traveler who passes and does not throw one.

Be that as it may, there are manyif not all, pilgrims who do not fail to comply with the tradition of depositing a stone in the humiliaderobeing this of the Cross of Ferro one of the largest in Europe and the most important of the Camino de Santiago. Some do it from the front, others from the back and many even bring the stone from miles before. In fact, in the past, pilgrims used to carry stones to collaborate with the transport of this material, destined for the construction of hospitals, bridges, churches and even the Cathedral of Santiago de Compostela itself.

The cross we can see today is not the original. This one is preserved a few kilometers before, in the Museum of the Roads Astorga, where she was taken in 1976. Later, in the 1980s, a chapel dedicated to Santiago and a fountain were built nearby. 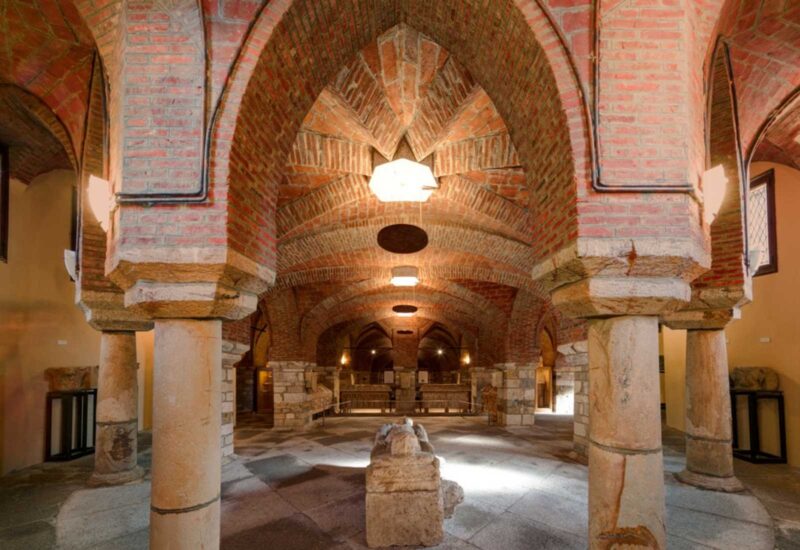 In recent months, a controversial landscaping intervention in the area promoted by the City Council of Santa Colomba de Somoza has been rejected by the pilgrim community, which showed its total disagreement with the project and that, fortunately, has not gone ahead, since the The Territorial Commission of Cultural Heritage of León did not give its approval. As the cry of protest goes, “the Ferro Cross is not touched”.

So, fortunately, our Cruz de Ferro is still standing and will continue to guide our steps, and it will be there waiting for every pilgrim to visit it and enjoy its meaning and its views. And you, what are you waiting for to meet her? You can perform all The French Camino de Santiago or a stretch, for example from León, and you will discover first-hand the magic of the Ferro Cross. As always, we are here to help and advise you in your pilgrimage adventure.