The Codex Calixtinus. The first Guide to the Camino de Santiago in History.

The Codex Calixtinus is a manuscript dated in the middle years of the 12th century, of great importance for the Jacobean culture and, in general, for the whole historical development of the late Middle Ages. Written in Latin, the original copy is kept in the Cathedral of Santiago de Compostela itself, although there are several later copies distributed in various countries.

Its drafting was promoted by the Compostelan Church at the time of the Archbishop Diego Gelmirez (1068 – 1140), who sought only to consolidate the importance of Compostela as an important apostolic see and pilgrimage centre: in short, to make Santiago an important centre of Christianity, like Rome and Jerusalem.

Good relations with the Papacy and the powerful monastic order of Cluny would help greatly in this task.

It is an extensive text divided into five books: liturgical texts related to the Apostle St. James, miracles attributed to him, the vicissitudes of the traslatio (journey to transfer the remains of the Apostle to Galician lands), the presence of Charlemagne in Hispania to liberate the roads to Compostela from the Muslims and the pilgrim’s guide from France to Santiago. More stories of miracles, musical compositions and texts justifying the work complete this compendium of Jacobean culture.

One text, many authors.

Attributed in its entirety to one or perhaps several anonymous authors, in the case of Book V, the one that interests us most as a guide for the medieval pilgrim, most experts agree on one author, the French monk Aymeric Picaud. The Church of Compostela historically related the authorship to the Cluniac pope Callixtus II (1050? – 1124), and hence the name of the work, although this attribution was perhaps given to legitimize and give authority to this book and to the city of Santiago itself as an apostolic see. Thus, this pontiff would appear as the author of the first and most extensive book and part of the second, although if we go back to the experts, this attribution would be false.

This work has been called in different ways, depending on which copy we are talking about.

Thus, the original, preserved in the basilica of Compostela, is the Codex Calixtinus or Codex Calixtinus itself. The French philologist and writer Joseph Bédier (1864-1938) coined the term Liber Sancti Iacobi to refer to the set of complete (or almost complete) copies that are preserved throughout the world. Other authors have proposed other names, such as, for example Iacobus. The codex opens with the following text: “Ex re signatur, Iacobus liber iste uocatur” (“Justly signed, this book Santiago is called”), proposed by the medievalist Manuel Cecilio Díaz y Díaz (1924-2008), specifically for the first and second books. The French writer Pierre David refers to the text as Codex Compostellanus or Liber Calixtinus. 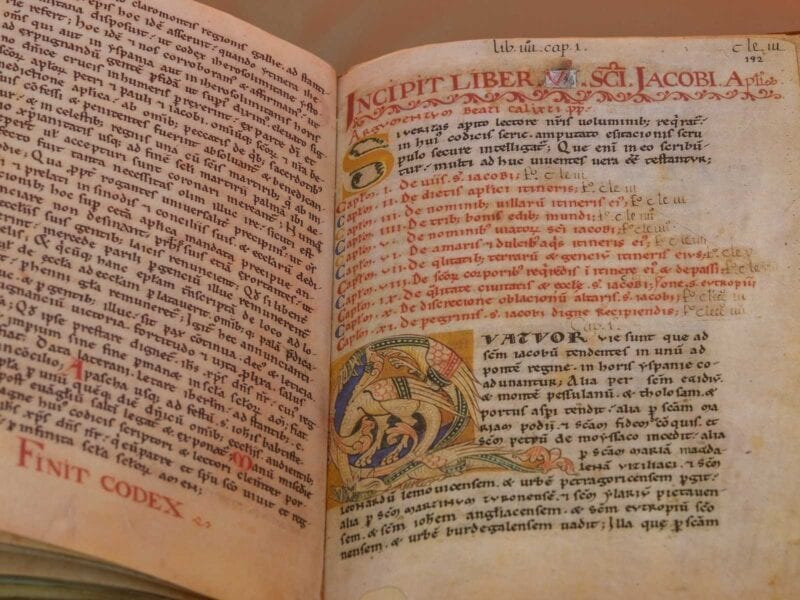 It is not the most artistically valuable medieval text, but its miniatures provide very good information. Its capitular letters (initials of a word at the beginning of a paragraph, of large size and rich decoration and colouring) are the most remarkable thing in terms of the aesthetics of the codex. According to researchers, several theologians, copyists, writers, poets and other artists would have come to Compostela from France on the initiative of Archbishop Gelmirez.

But… Why is the Codex Calixtinus so important?

We are especially interested in Book V or the so-called pilgrims’ guide, an authentic tourist guide on the French Camino de Santiago. This Liber peregrationis, composed of an introduction and eleven chapters, is a detailed and accurate guide that describes the different French access routes to the French Way in Spain, and the French route itself in our peninsula. Thus, we are told about the villages along the way, their churches and buildings, the quality of the water, rivers and land, the relics that are found, etc.. It even mentions and pays tribute to all those who worked in the construction and maintenance of the road’s infrastructures. Chapter VII is not to be missed, where he describes, among other things, the people who live in the towns along the way:

The Galicians, for example, he describes as “irate and very litigious”.

If its author or authors were alive today, they would surely be worthy candidates for the Nobel Prize for Literature. In fact, this literary monument has been chosen by UNESCO as a “Memory of the World Register” because of its historical importance. Such is its value that on 5 July 2011 the medievalist of the Archive of the Cathedral of Santiago discovered that the work was not in its safe. When the police were alerted, an investigation was launched which, a year later, bore fruit: the codex appeared wrapped in a cloth, and in the middle of rubbish, in the garage of José Manuel Fernández Castiñeiras, an electrician who worked for 25 years in the maintenance of the Cathedral of Santiago and had access to the book. For the theft of the Codex he was sentenced to 8 years and 2 months in prison, although he was released in 2019 on medical grounds. Published in 2016 by Alvarellos Publishing House. You can get a copy of Book V of the Codex Calixtinus in any bookshop. It’s a short and very enjoyable read, 100% recommended! And if you dare to do the Camino de Santiago, we can offer you our own 21st century guide of the 21st century.