A Quintana Square and the pilgrim’s shadow

It is not strange that a city with the extensive history of Santiago and the multitude of people who have walked its streets, is an inexhaustible source of legends, tales and myths. The silhouette that is projected every day on one of the facades of the cathedral. The silhouette that is projected daily on one of the façades of the cathedral is that of a pilgrim wearing a wide-brimmed hat, walking stick, gourd and cloak. This ghost is nothing more than the result of a coincidence that makes the shadow of a granite pillar located in the Plaza de A Quintana cast its figure when night falls and the lighting is turned on. However, there are more than a few interpretations that enter into magical and superhuman territory that go far beyond this natural and logical explanation.

Different versions of the Plaza A quintana

Not one, not two, but four different versions of the origin of this vision have come down to us.

The first of them is due to the past use that was given to Plaza A Quintana. This esplanade next to the cathedral is divided into two levels, separated by a staircase that divides its surface in two. The one at the top is called Quintana de Vivos. The one below, on the other hand, is known as Quintana de Mortos (of the dead).

The public cemetery was previously located in the lower part. That is why many say that the shadow of the pilgrim is the manifestation of the wandering soul of one of those who rested there. The second explanation has to do with the darkest period of the Catholic Church and the brutal practices that took place in this place. In this case it is said that the shadow belongs to the soul of some wretch who was burned at the stake by inquisitorial judgment. 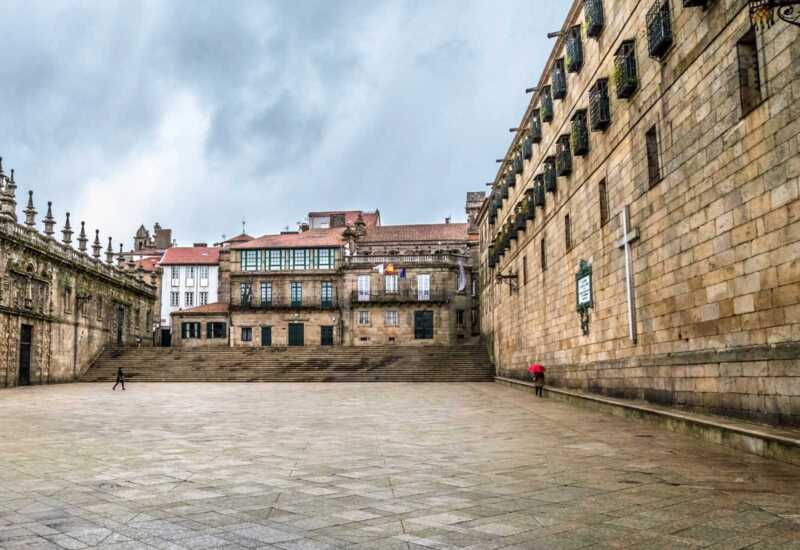 A very widespread version is the one that says that the shadow belongs to the soul of Leonard du Revenant, a 15th century French pilgrim of the 15th century. This man was sentenced to travel to Santiago to purge himself of the murder of his father, whom he killed to inherit his fortune. It was by the intercession of the Duke of Burgundy, who is said to be his real father, that his sentence was reduced to the pilgrimage.

Along the way, on his way through Navarre, the Frenchman met an innkeeper whom he tried to conquer. She rejected him and this led to a fight with the girl’s boyfriend. Leonard, in revenge, stalked the young woman, forcing himself on her and subsequently murdering the loving couple. On his arrival in Santiago, Leon de Cornu appeared to him, who announced that his death was purged but not that of the other two innocents. Therefore he would have to wait for their souls in the cathedral to be forgiven. Hence, every night, Leonard’ s shadow appears impassive, waiting for the souls of the bride and groom he murdered.

The priest and the nun.

Finally, the version that will be heard most by those who pass through the square will be that of the priest and the nun. Legend has it that a clergyman from the cathedral and a nun from a convent on the other side of the square were having a secret affair. The priest, tired of having to hide his love, proposed to his lover to run away from Santiago, away from censoring looks. So one night he met her in the square dressed as a pilgrim so as not to attract attention. It is said that he waited for her for hours but she never showed up. The shadow, in this case, represents the priest in disguise. He has never resigned himself to losing his beloved and returns every night to wait for her. 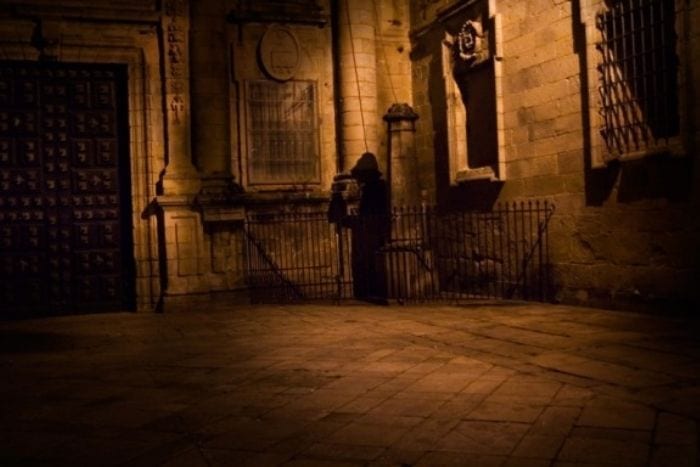 In reality, this is only one of the numerous legends that Santiago hides, and these are only some of the versions that are told about the silhouette of Santiago de Compostela. A Quintana Square. It is said that the shadow will accompany us all the way but that we will only see it on the façade of the cathedral once night falls. This figure has undoubtedly become an icon of the city and one of its most photographed and popular images.