Santiago de Compostela is a city that offers alot to visit, but if you have more time you might want to do some of the excursions from the Jacobean city: in addition to this one, you can also discover the magic of the Costa da Morte, with its legends and its wild coastline, or the calm of the Rías Baixas, with its estuaries and coasts generous in seafood and wines.

You arrive in Santiago de Compostela after a long walk, visit the tomb of the Apostle in the Cathedral, pick up your credential, have a glass of wine and celebrate. You may return home the next day, or you may extend your stay in Santiago de Compostela. In addition to the Jacobean city, visiting other nearby areas of Galicia can be the ideal complement to your pilgrimage.

Costa da Morte and the south of A Coruña province

One of the most beautiful villages in Spain, just twenty minutes from Santiago de Compostela. A must on the Camino de Santiago to Finisterre and Muxía, with its imposing bridge over the Tambre River and the Jacobean legend associated with it, you can enjoy its beautiful scenery, perhaps a good swim and a refreshing aperitif.

Bathed by the Atlantic Ocean, this beautiful fishing village in the heart of the Costa da Morte will tell you about Marian legends and the Apostle, as well as stories about tragic shipwrecks. In Punta de la Barca you can visit the Marian sanctuary of the Virgen de la Barca and its Sacred Stones, the lighthouse of Muxía, the Monument of the Wound (memory of the Prestige oil tanker) and the kilometer 0 of the Camino de Muxía. If the day is a little windy, you can see how the sea breaks on the rocks, and we challenge you to find the tadpoles that inhabit them. In its port you can enjoy the Galician gastronomy, as well as take a dip in its fresh and clean waters, even if it’s just your feet. 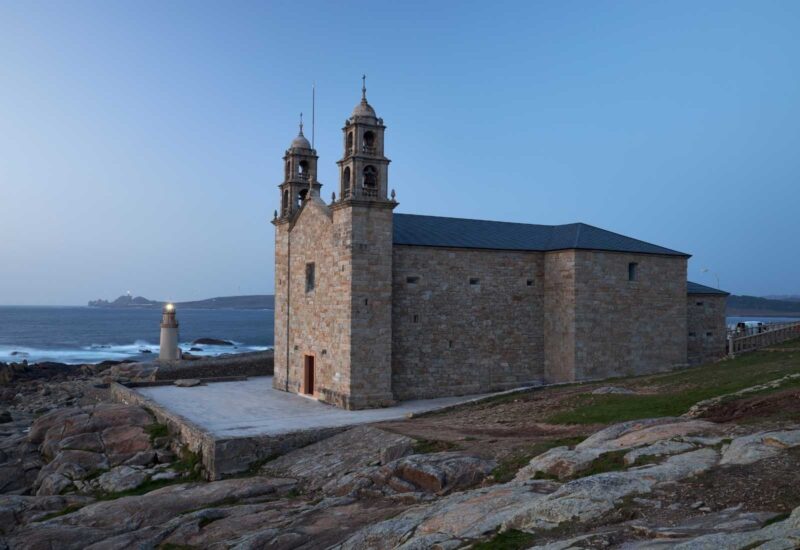 A classic destination in Galicia, among the five most visited destinations in the Autonomous Community. A mythical seafaring village and cape, where the Romans, and previously the indigenous inhabitants, located the End of the Earth: hence its name, the Finis Terrae. Throughout the Costa da Morte you can enjoy a beautiful sunset, but here, where it ends, it is more magical. With a refreshing aperitif, find a good spot among the rocks, make yourself comfortable and enjoy the scenery, the sunset and the murmur of the sea. Then you can go down to the village and enjoy its seafaring atmosphere.

In this small village in the estuary of Muros and Noia you can visit the Fervenza (waterfall in Castilian) of Ézaro, where the Xallas river flows into the sea with this spectacular waterfall, the only one of its kind in Europe. With a drop of up to 40 meters, this waterfall is illuminated on summer nights, and there you can enjoy its amazing waters falling next to the slopes of Mount Pindo, the Olympus of the Celtic gods. It has a beach bar and souvenirs for sale. 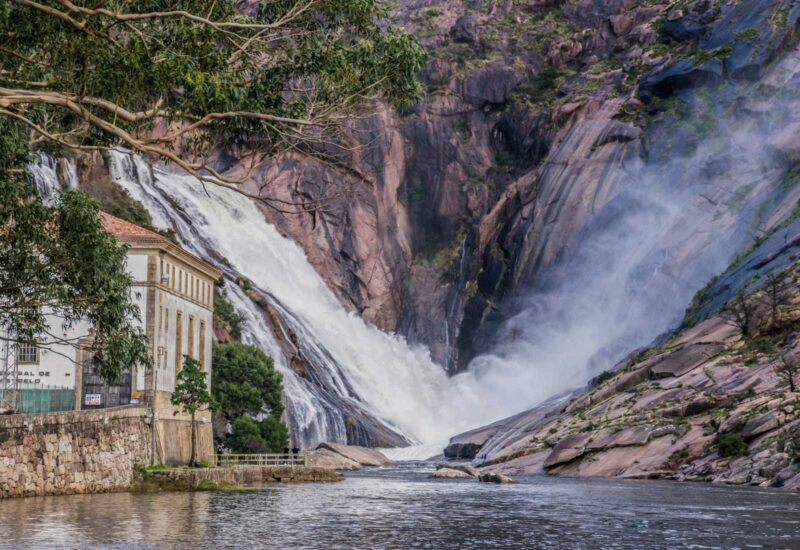 In the neighboring towns of Lira and Carnota you can find two of the longest examples of hórreo in Galicia. Thirty-six meters long the first one and thirty-five meters long the second one, they can give you an idea of the wealth of the house to which they belonged: the hórreo is, in Galicia, a traditional granary generally built in granite and that, depending on its size and quality of construction, represents the status of the owner’s family. In addition, they are sets of traditional architecture, as they are accompanied, in both cases, by pazo and dovecote.

Many viewpoints, and with different views, can be found in Galicia. One of them is the viewpoint of Paxareiras, which with its more than 450 meters high offers stunning views of the estuary of Muros and Noia, as well as the magnificent beach of Carnota. It is usually a bit windy, like many viewpoints, but once enjoyed, you can go down to the villages of Muros or Noia to have a snack and walk their promenades. 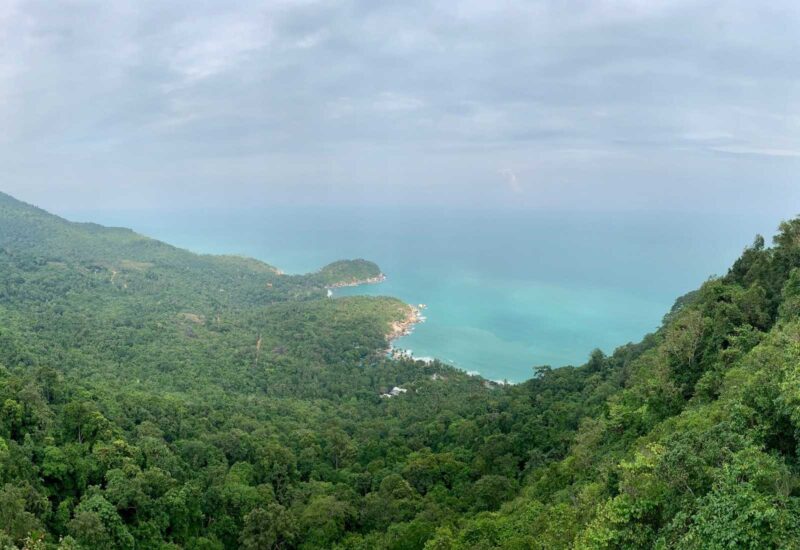 Region of Salnés and the north of the province of Pontevedra

In this case another fervenza or waterfall, of the many that exist in Galicia. Within the Portuguese Way as an alternative detour, it is well worth a visit. Fresh mountain waters fall surrounded by old mills, many of which are recovered and destined to the hotel industry. A quiet place for you, your friends and/or your family to enjoy a great day and refreshing swims. Very close to Caldas de Reis, in the province of Pontevedra, you will be able to see geese in the wild (don’t get too close, they have a bit of a temper!).

The capital of the homonymous province, through which the Portuguese Way passes, is an example of conservation and urban adaptation, something you will see if you walk through its beautiful historic center. The Iglesia de la Peregrina, as well as other monuments, will pleasantly surprise you, and then you should not miss a drink in the Plaza de la Leña or the Plaza de la Verdura.

Very close to Pontevedra is this beautiful seaside town, known by some as the Galician Venice. Hórreos overlooking the sea and an urban labyrinth of granite will offer you a delightful walk with the scent of the sea. Numerous restaurants and souvenir stores will help you never forget this beautiful place. 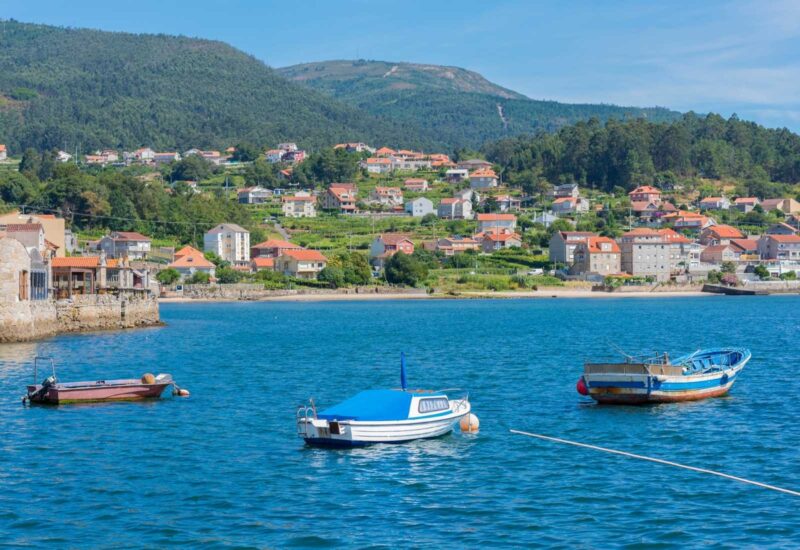 In O Grove there is a lot to do, and not only drinking albariño and eating mussels (which also!). From the port, boat trips are offered along the Arousa estuary, where, in addition to gastronomy, you will be offered explanations about the cultivation of mussels, scallops and oysters in the fabulous estuary rafts. Nearby you have the Lanzada beach, a beautiful sandy beach facing the Atlantic Ocean and numerous legends, as well as the Illa da Toxa, beautiful neighboring island where you will find, apart from houses of millionaires, a fabulous church lined with scallop shells, the Hermitage of San Caralampio and San Sebastián; in addition to the spa, don’t forget to visit the stores where you can purchase the famous soaps that bear the name of the island. 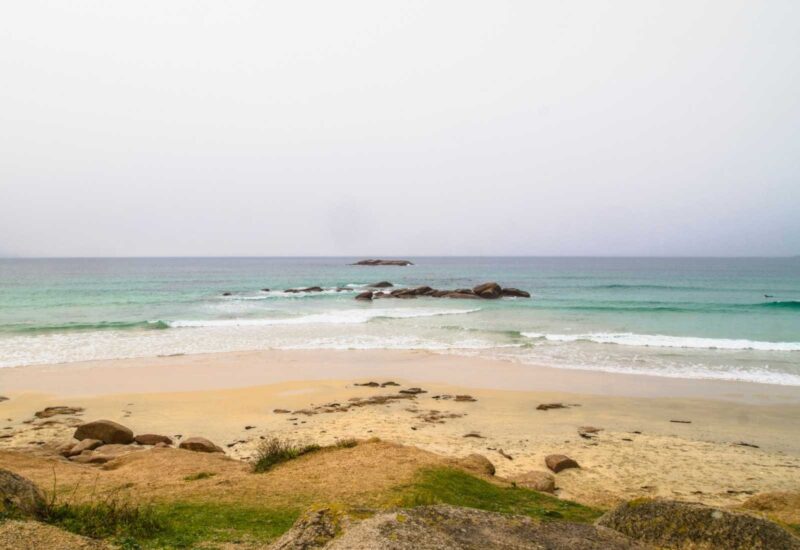 Capital of the region of O Salnés, in the square of Fefiñáns be sure to admire its fabulous architecture. Where Albariño wine is king, you can visit a museum dedicated to it. In addition, next to the museum, you can visit the ruins of the old church of Santa Mariña, where, among others, a son of the writer Ramón del Valle Inclán is buried.

Some are hot and some are not, that’s how the famous Padrón or Herbón peppers are. Picturesque village at the source of the Arousa estuary, with a great Jacobean tradition (stop on the Portuguese Way) and famous for the octopus served at its fair. Birthplace of great writers such as Camilo José Cela (specifically, the neighboring Iria Flavia) and Rosalía de Castro. In addition, its Botanical Garden is worth a long walk. 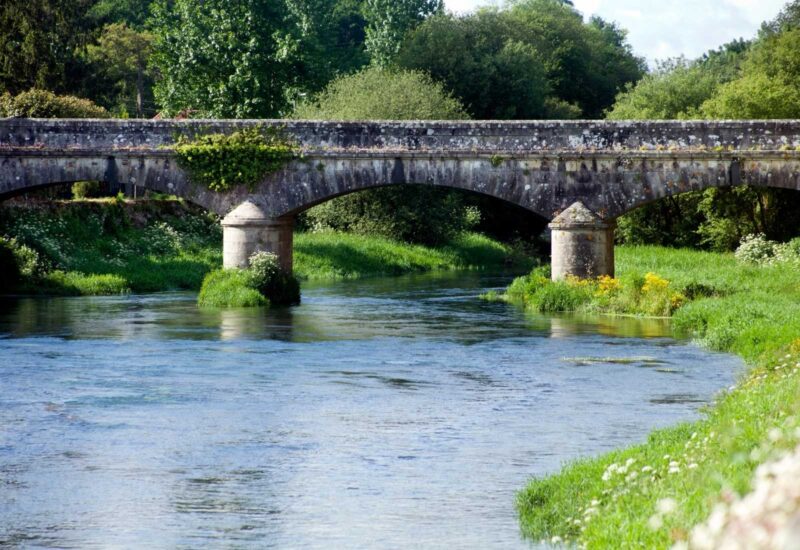 As you can see, you have many options for excursions in Galicia from Santiago de Compostela, with routes that easily allow you to visit everything in one or two days, depending on your interests. We want you to know in depth all the magic of Galicia, and we make it very easy for you. Contact us and we will inform you without obligation.