After several years of closure, the Caminito del Rey is no longer one of the most dangerous trails in the world, due to the restructuring that has been carried out for the enjoyment of hikers and climbers. The new Caminito del Rey does not alter the essence and adrenaline of the previous one with trails and suspension bridges with more than one hundred meters high, and thus this place becomes one of the most beautiful places in the province of Malaga and Andalusia.

What is the Caminito del Rey?

Located between the municipalities of Álora, Ardales and Antequera, on Caminito del Rey consists of a pedestrian walkway of more than three kilometers that runs along the rocky walls inside a canyon at a height of up to 105 meters above sea level. Guadalhorce river, sometimes vertical walls, as if it were a cliff, and with a width of one meter in some sections. 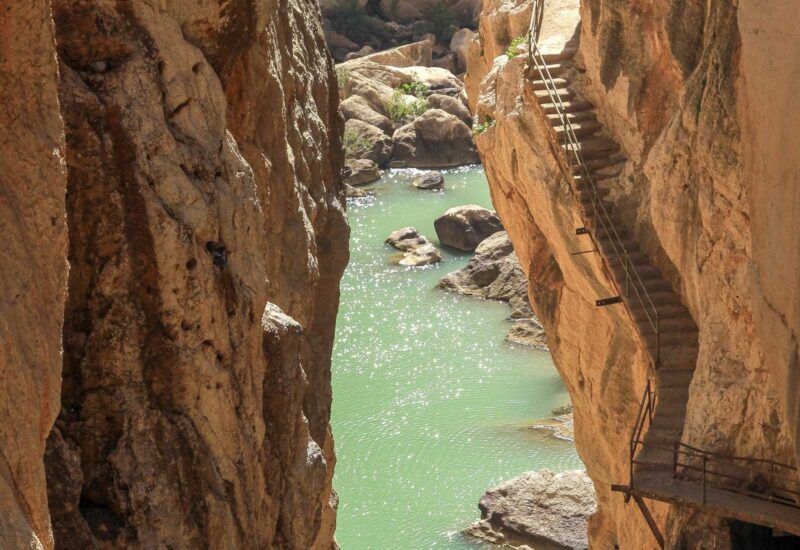 Thus, it is an overhead walkway that was created to replace the previous one, known for its dangerousness. For this reason it is not surprising that it was known as the most dangerous road in the world: between 1999 and 2000 there were two fatal accidents, which led the Junta de Andalucía to close it in 2001. Even so, the old structure remains above the current one so as not to lose sight of the risk of passing through it not so long ago. Thanks to a restoration work between 2014 and 2015, making the path is totally safe, without detracting from its excitement and spectacular nature.

A whim of nature

More than a whim, a marvel. The sierra of Malaga, in the western part of the Betic Mountain Range, offers us this unique environment with the Guadalhorce River as a protagonist, passing through the reservoirs of El Chorro, Guadalhorce, Guadalteba and Gaitanejo. Located in the center of the province, this Natural Park Desfiladero de los Gaitanes, as it is also known, is excavated in limestone and dolomites from the Jurassic period, although we can also find rocky outcrops from the Miocene. 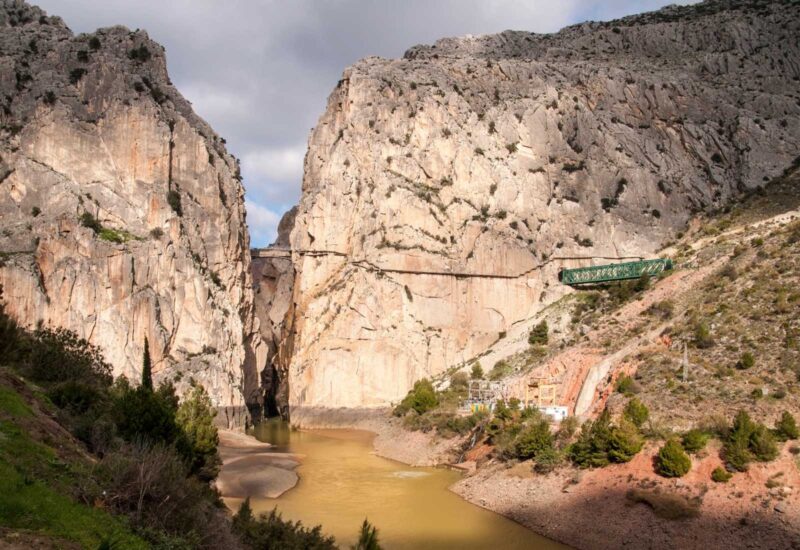 Geomorphologically, the most spectacular feature is perhaps the vertical stratification of the limestone that the river has been drilling (up to 300 meters deep, and ten meters wide), in addition to the twenty existing caves, some of them hanging dozens of meters above the course of the river. In its evolution, the Guadalhorce river was progressively deepening the gorge in successive stages. Different conglomerates, calcarenites and Miocene sediments present beautiful structures, including fossil remains of whales, as well as sandstone formations of the taffoni type, which are rounded sandstone promontories in which erosion created a cave or shelter.

As for its flora, Aleppo pines, stone pines, holm oaks and eucalyptus make up the arboreal mantle, without forgetting the scrubland in which the rockrose, broom, junipers, savins, palmettos and junipers stand out. On the river bank we will find tamarisks, reeds, reeds, reeds and oleanders, as well as poplars and willows. 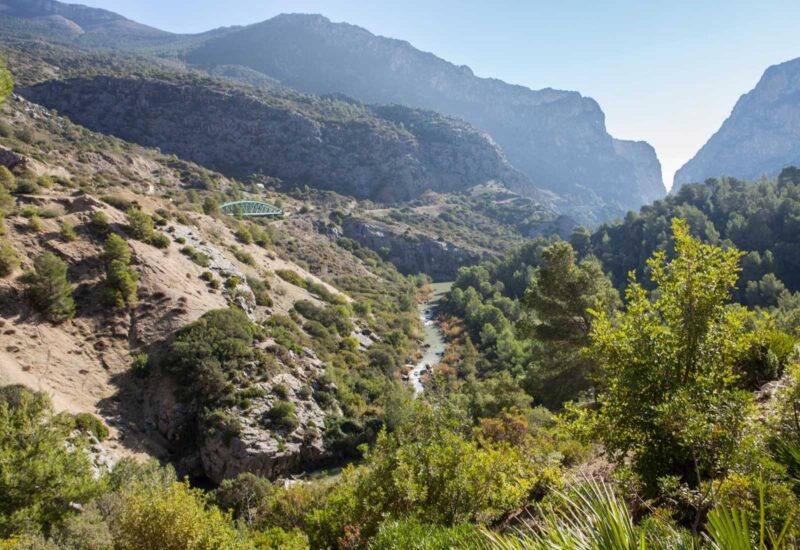 Among the fauna, mountain birds such as Egyptian vultures, griffon vultures, golden eagles and honey buzzards are its most numerous neighbors. There are also amphibians and reptiles, such as the ocellated lizard, the ladder snake, the bastard snake and the viperine snake. Among the mammals, the mountain goat is found in the higher elevations, along with foxes, rabbits, dormice, badgers and genets.

It was declared by the Junta de Andalucía as a Natural Site in 1989, although it was already a Special Protection Area for Birds (SPA) in 1987. Since 2006 it has been part of the Andalusia-Morocco Intercontinental Biosphere Reserve of the Mediterranean and of the list of Sites of Community Importance of the Mediterranean Biogeographic Region. It is currently a candidate for declaration as a World Heritage Site by UNESCO.

Located 60 kilometers from Malaga, the distance of the new Caminito del Rey is a total of almost eight kilometers. The trail can be hiked in about three or four hours, is very easy to walk and does not require great physical fitness. In fact, it is a great tourist attraction suitable for all ages. 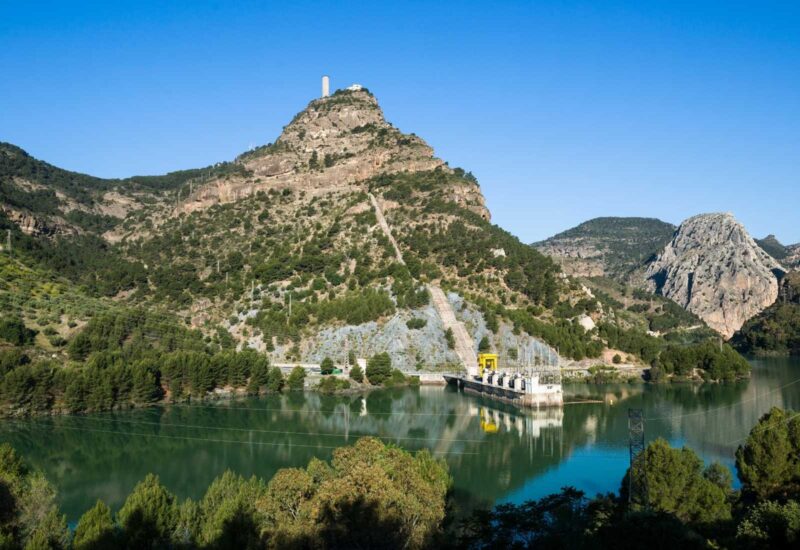 It is a linear route that runs from north to south, from Sillón del Rey to El Chorro Station, between the municipalities of Ardales and Álora. It has two accesses, one in an area with services and parking, where it enters through a first tunnel, and another, also with a tunnel, which allows shortening the route by a little more than one kilometer. Both paths lead to the Control House, where the trail itself begins. This leads to the Gaitanejo Dam and the Cambutas Dam, approaching the famous footbridges. This leads to the first canyon, the Gaitanejo Gorge, and then to the second, called Tajo de las Palomas, where the King’s Bridge is located, crossed by King Alfonso XIII on May 21, 1921 after getting off the siding located there. We will find caves, viewpoints, valleys, sand drains, resting places, shelters and old factory structures. In the third canyon we will find more walkways, caves, balconies and fossil remains, to reach the mythical hanging bridge. The final downhill section will take us to El Chorro.

The best time to visit is perhaps between the months of March and April, when the flora begins to awaken with spring. You have to know that it is a very visited place, being advisable to arrive one hour in advance, and you must also book a ticket on the official website. The general visit costs 10 €, and the guided tour (Spanish and English), 18 €, both with various schedules. We recommend, as always, to consult all the information on its official website. 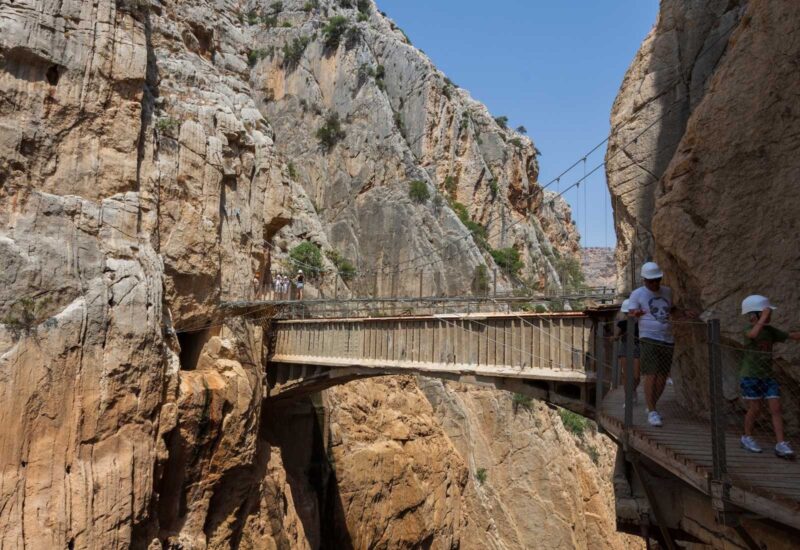 Once at the Control Booth, a helmet will be provided, footwear will be checked and the organization will ensure that no unauthorized items, such as umbrellas, hiking poles, selfie sticks, etc., are introduced. There will also be safety rules (curiously, and perhaps for safety reasons, children under eight years of age are not allowed to visit) and maintenance rules, and it is strictly forbidden to throw garbage on the ground.

The Visitor Reception Center will soon open, with an information point, souvenir stores, a cafeteria, toilets and two hundred parking spaces for cars and seventeen for buses.

The benefits of the caminito: a movie plan

The most spectacular part is the passage through a spectacular walkway that crosses the Gaitanes Gorge, where the views are truly incredible. This new tourism initiative has not gone unnoticed by almost anyone. Even prestigious magazines such as Lonely Planet and National Geographic have also echoed this route, including it in their reports section, just as we present it to you as an exceptional day trip.

It was also the scene of film shoots, such as the 1965 movie “Von Ryan’s Express”, starring Frank Sinatra and Raffaella Carrà, simulating the border between Switzerland and Italy, or the more recent “The Bridge of San Luis Rey”, from 2004. 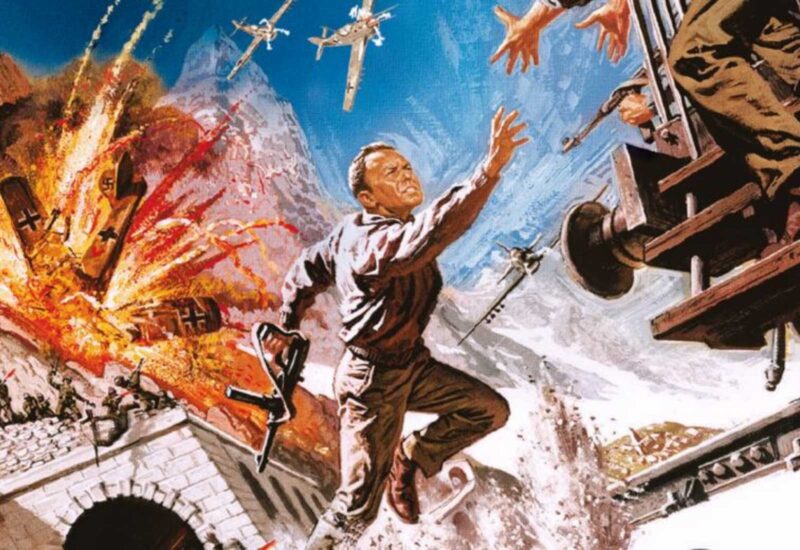 No matter how you look at it, the views that can be appreciated are of great beauty. Those passionate about hiking, photographic hunting and especially climbing, will find a multitude of possibilities in this place. Definitely, the Caminito del Rey is positioned as the trendiest tourist attraction in Andalusia.