The most recognizable elements of Galician architecture. The Hórreos del Camino

During your adventure on the Camino de Santiago you will meet many pilgrim friends, lush nature, rich historical heritage and lots of local culture. In many villages and towns along the different routes you will find a lot of rural architecture, and in this article we are going to talk about an example of it, the hórreos, a typical construction of some of the regions through which the Camino de Santiago passes, especially in Galicia.

The hórreos are constructions in stone and/or wood (although sometimes even cement and brick), generally square or rectangular in shape, elevated or separated from the ground and with ventilation in their walls, which serve as granaries or storehouses for foodstuffs in general. Closely linked to agricultural activity, they are generally the protagonists in rural environments.

Many pilgrims, seeing these constructions for the first time, ask our guides, “What are those little houses?” 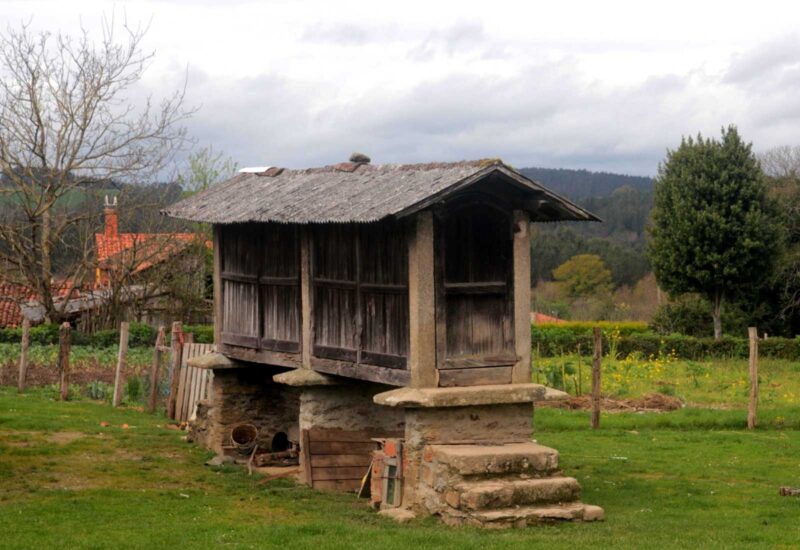 The term comes from the Latin word horreum which refers to a granary where cereal, fruits of the field and other foodstuffs are stored. The need to store surpluses is very old, and already in the Cantigas de Alfonso X El Sabio (XIII century) we can admire some miniature where hórreos appear.

There is not only the name of hórreo, but, as it exists in other regions of Spain and even in other countries of the world, this typology of construction can have other names: the Asturian panera, the Navarrese and Basque garaia, the Portuguese espigueiros, etc. In Galicia itself, it is called by different names depending on the area: hórreo, cabazo, canastro, cabaceiro, etc. From Japan, through Turkey, Switzerland, Germany, Sweden, etc. you can travel and find different forms of granaries, with their different names.

Be that as it may, practically all of them are built in a more or less similar way, given the function they have to fulfil, being very important that they are ventilated and elevated, or at least well separated from the ground, to avoid humidity and animals.

The Galician hórreo is raised and separated from the ground by paired columns, generally from 2 or 3 pairs. This column is crowned by a round piece that protrudes in such a way as to prevent access to mice, ants, etc. From there the architraves begin to give a rectangular shape to the floor plan of the hórreo, with walls that leave spaces for ventilation, and finally it is crowned with a gabled roof, at the ends of which there is usually a cross and another top that can be lancet-shaped or round. It is usually built entirely of granite, although there are also some made of wood or a combination of both. 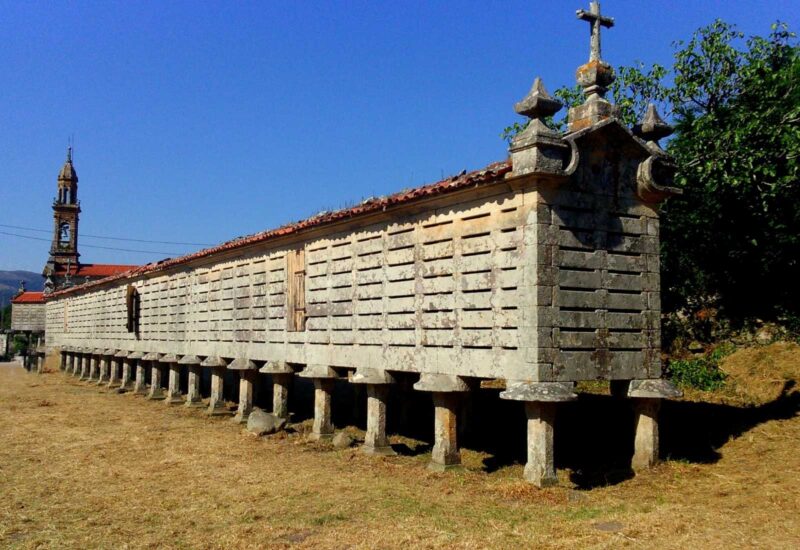 Depending on the size and material of the hórreo, it will denote that the owner family is more or less rich: the rich ones would have very long carved granite hórreos, and the poor ones would have shorter wooden hórreos. The longest granite hórreos in Galicia are those of Araño (Rianxo), Carnota and Lira (Carnota), which are well over thirty metres long.

On the Camino de Santiago

The Camino de Santiago, with its various routes, crosses several regions within Spain. We will always see hórreos within Galicia, as this is where all the routes converge. Outside Galicia we will see hórreos in the northernmost routes, such as the Northern Way, the Primitive Way and the French Way, where it is very common to find them in the countryside.

In the last 100 km of the French Way you can find a large number of hórreos of different types. The hórreo of Toxibó (Portomarín) is an example of a granite and wood hórreo, which rises majestically at the foot of the road. In Leboreiro (Melide), in front of the church of Santa María, you can find a very singular example of hórreo, smaller and made with branches and small wood, typical in this area and in humble families. Approaching Arzúa we will find a larger and more quadrangular type of hórreo, almost like a house, where even the lower part would be used for livestock, and the upper part for a barn. 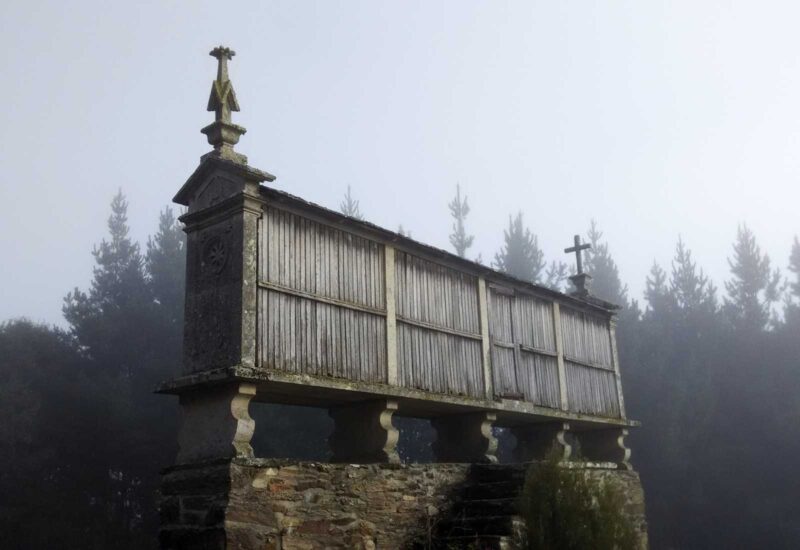 The English Way offers some examples of Galician hórreos, such as the one located in Cruz (Ordes), a typical Galician granite hórreo. In addition to him, in this place you can admire a statue of Santiago Apostle and other more surreal, including dinosaurs.

On the North Road, before the town of Markina and turning off the route towards Etxebarría (Vizcaya), you can admire a beautiful old example of a Basque hórreo, the hórreo of the Ibargüen farmhouse. With stone supports, the rest of the construction is of fine carpentry.

In the last 100 km of the Primitive Way, once you have passed the city of Lugo, the number of granaries you will find will be overwhelming, with notable changes in style as you reach Arzúa and connect with the French Way. 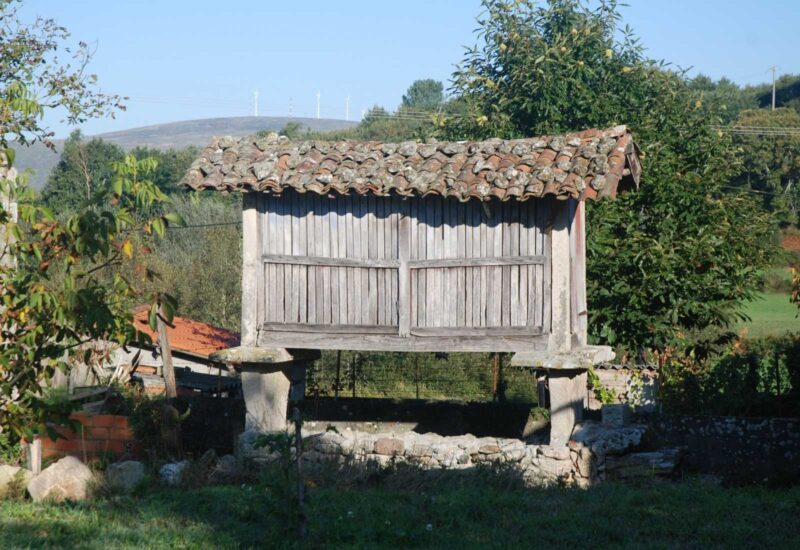 In the last 100 km of the Portuguese Way we will find many hórreos. In Ribadelouro we will be able to find one that nowadays is used as a store of farming implements, it is usually open and the pilgrim can observe its interior. Further on, in Pontesampaio, we will also find more examples of this construction. From Pontevedra, Caldas de Reis and Padrón, will be a constant along the way.

The Sanabrés Way (Vía de la Plata) also shows the examples that we can find in the province of Ourense, as in Oseira and its great monastery. And there are still many more to go until Santiago de Compostela. 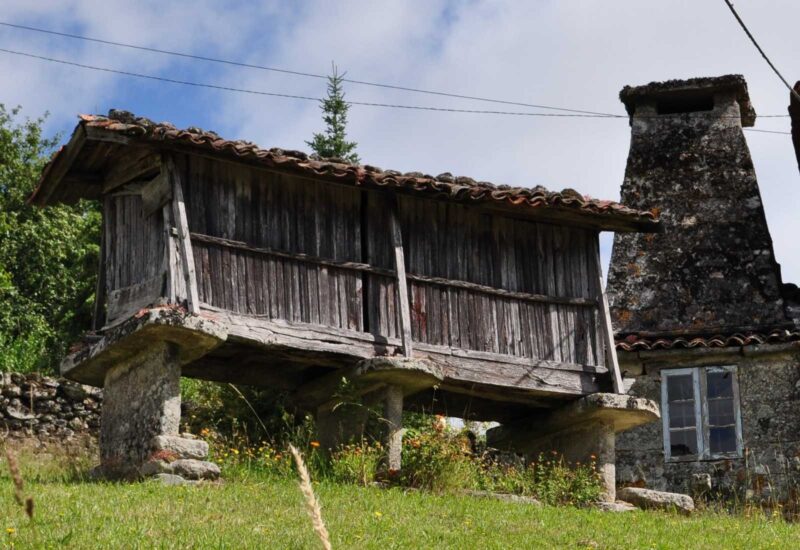 If you decide to walk the Finisterre and Muxía Way, you will find a large number of hórreos. When you arrive at Olveiroa (Dumbría) the hórreos will be the protagonists, perfectly integrated in this rural enclave. And between Muxía and Fisterra you must admire the granaries of Lires, a small village that also boasts the majesty of these granaries. And although they are out of this route, because they are very close, in Carnota you can admire two of the longest hórreos of Galicia, the one of Carnota and the one of Lira, an authentic ode to the good harvests. 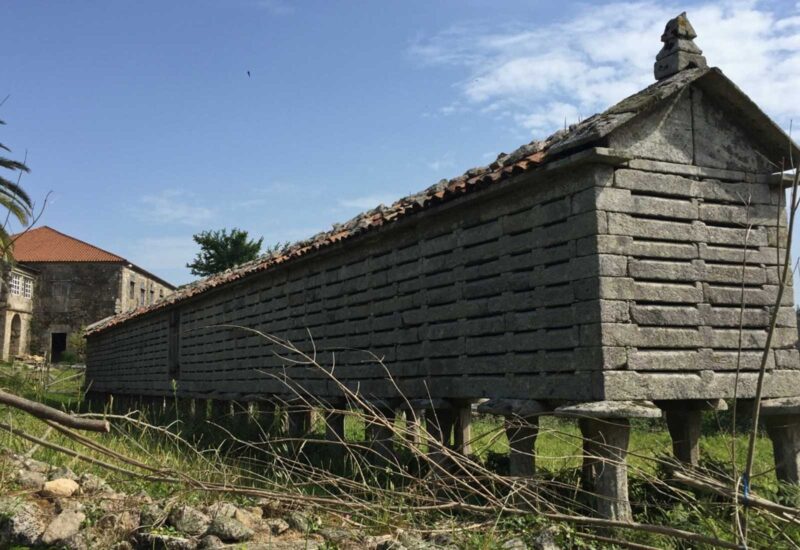