La vereda de la estrella is an old road that was built in 1890 to exploit the existing mines in this part of the Sierra Nevada. Did you know that during a good part of the 20th century there was even a tram to the San Juan ravine? This narrow-gauge railway line was known as “Tranvía de la Sierra”. Today there are no more platforms or guardrails, but we preserve the trace in the relief of the passage of the locomotives.

Once this commercial function of the route was dismantled, the hikers recovered it as one of the most beautiful entrances to the mountain range that can exist in all this mountain. And it is not for less, since in its route the hiker can observe with incredible admiration the imposing and majestic crests of the Mulhacén, Alcazaba and Veleta peaks. In these lines we invite you to discover more about this “pretty girl” of Sierra Nevada.

The surroundings of the path of the star: Sierra Nevada

La vereda de la estrella is situated in the mid-mountains of the Sierra Nevada of Granada. Specifically, the path is located at the head of the Genil river valley, in the San Juan ravine. This access to the mountain was traditionally used as the natural entrance to the mountain from Granada. The people from Granada followed the river up to its source and so little by little they went deeper into the mountains.

This privileged mid-altitude location in the imposing Sierra Nevada, makes that the path of the star preserves some fascinating natural ecosystems. A flora and fauna that deserves to be preserved to be able to continue enjoying it for a long time.

This is our village of reference to get to the beginning of the trail. It is a typical white village of the Andalusian mountain range, located at an altitude of just over 1,000 metres above sea level. The village enjoys spectacular views of the Mulhacen (3,482 m), the highest peak on the Iberian Peninsula. 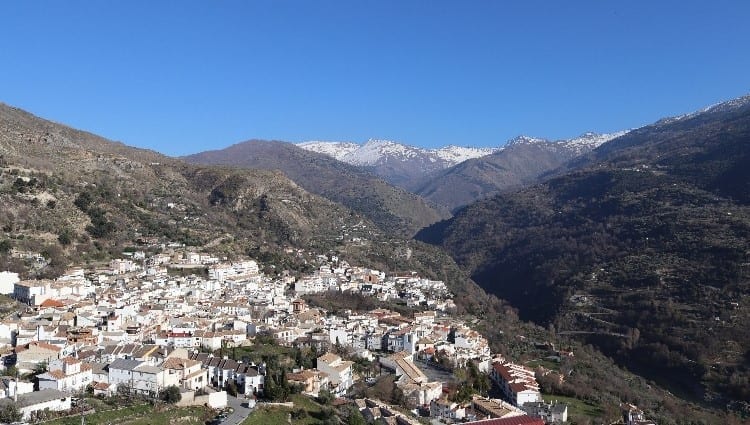 Route of the path of the star

The route can be done in a circular or linear way. The route is approximately 20 kilometers long. It should be noted at the outset that the circular route is much harder to return to the starting point than the linear route. Currently, due to the degradation of the signposting on the circular route, we only recommend taking this itinerary if you are perfectly aware of where you have to go. If you don’t know the sierra, the best alternative is to take the linear route.

We start the route crossing the bridge over the river Genil and starting a climb on the left hand side that leads us to the path high above the valley. In this part there is a lush vegetation of Atlantic transition, with species such as gall oaks, chestnut trees, oaks, ash trees… In fact, the first highlight of the route is in “el abuelo” (the grandfather). Grandfather is a centenary chestnut tree, affectionately nicknamed this way by the hikers. 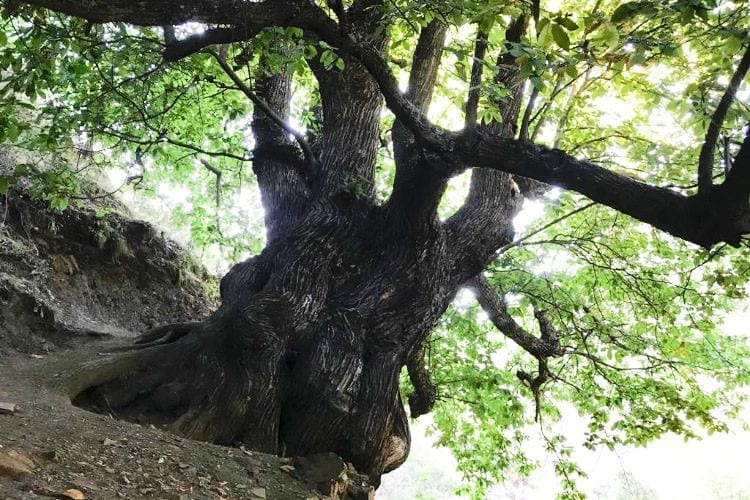 After walking for about an hour, we reach the confluence with the river Vadillo, where we can take a downhill option to the left and another that continues straight on to the right. For the linear route we take the option on the right. Little by little the imposing peaks of Alcazaba and Mulhacén will appear before us, in a landscape that at this point is called “Viso de las Nortes”. We will continue walking until we cross the bridge over the Guarnón river to enter the “Camino del Real”. After arriving at the Mine of Justice our journey will be over and we will start our way back.

We start the route as in the linear route, except that when we reach the confluence of the river Vadillo, we will take the detour to the left. The indications of this path are to reach the refuge of Peña Partida. This path descends to the Genil River and then goes up the “Cuesta de los presidiarios”. After completing the ascent of the hard slope of the convicts, we will follow the signs to reach the refuge of the cockroach. After passing it, the majestic north faces of the Alcazaba, Mulhacén and Veleta peaks will rise before us. Our next point is the “Refugio del Aceral” and then crossing the Aceral ravine. Then we will reach the vicinity of the Barranco de Lucia to the river Real, at a point known as “Majada del Palo”. Finally, we will head towards the Mina de la Justicia and the Guarnón ravine, returning along the linear route explained above. 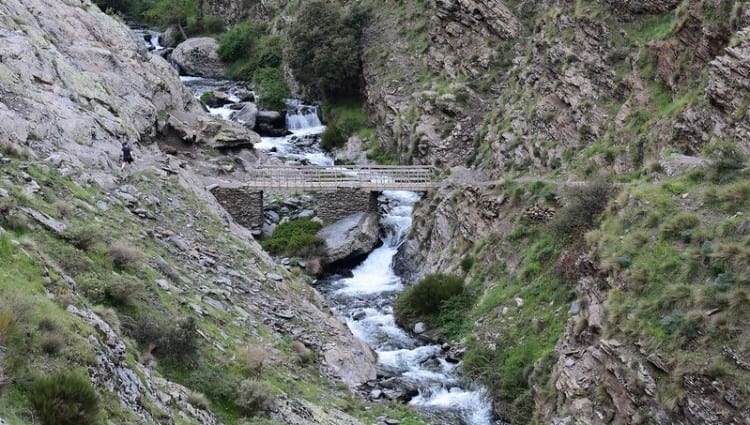 How to get to the starting point?

As we have pointed out before, the route of the path of the star starts from the Barranco de San Juan (Güejar sierra). Once you have arrived by road to the center of Güejar, you must follow the signs from there to get to the Barranco, you can’t get lost. The only problem lies in the narrowness of the road. Once you have passed the restaurant Casa Chiquito, the road becomes narrower and in some places there are small rock falls. Keep in mind that we are entering the ravine, so watch out for cars. The road ends at the restaurant Barranco de San Juan, so we recommend you to park before if you can find a place.

La vereda de la estrella is a mid-mountain route, suitable for almost everyone. Although if you’re not used to doing routes with a lot of slopes you might get a bit tired. The total length of the route is 20 kilometers, so we consider that it is perfectly feasible to do it throughout the day, stopping to rest as many times as necessary.

On the other hand, if you want to enjoy the wonderful natural environment that hides behind this route, but you do not feel ready to walk so much, you can opt for a small linear section of it. Choose a point to walk to and then turn around.

What is the best time of the year to go?

The path of the star is a route that can be practised all year round. However, it is true that in the equinoxes, spring and autumn, is perhaps its most beautiful time. In spring the landscape is idyllic, due to the flowering and the fact that the mountain range still retains its white blanket of snow. On the other hand, in autumn the landscape also has its point thanks to the play of colors of the vegetation that is produced as a result of the fall of the leaves. In addition, you will be able to see how the mountain range begins to cover itself with its thin mantle of snow. 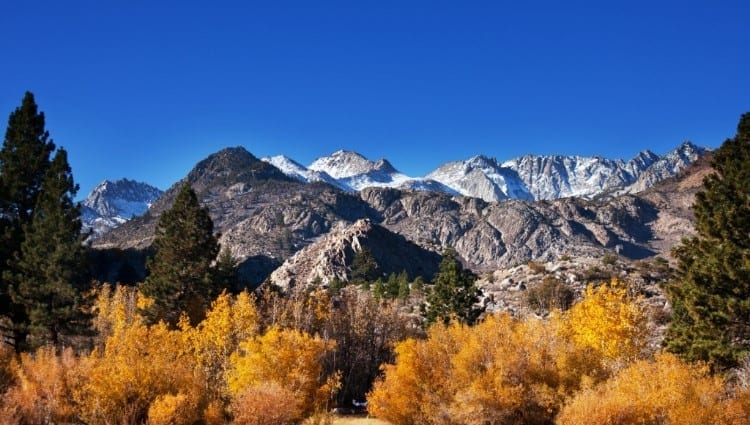 If you do the route in summer, remember to bring a good amount of water. You are in Granada and summers are very hot. Remember that the trail is a mid-mountain route, so the altitude will not spare you from the high temperatures.

Finally, if you dare to do the route in winter, you should take into consideration the state of the path. Although it is a practicable path during the winter season, it is true that it is necessary to be very cautious. With the winter rains it is common for some sections of the path to become detached. In addition, depending on the amount of snow and especially ice, the use of ice axes and crampons may be necessary.

Tips before doing the Star Trail

As always, good hydration is key. The clothing must also be in accordance with the sport and with the season of the year in which we do the route. Remember that trekking poles can become your great ally when it comes to starting up climbs such as the prisoner’s slope. If you are going to do the route in winter, bear in mind to take the necessary equipment, as we mentioned before.

Once the route is finished, if you still have some strength left over, we recommend you to go down to Güejar sierra for a walk. Güejar sierra is one of the most charming villages of this side of the sierra, with nothing to envy to the famous white villages of the Alpujarra such as Pampaneira or Capileira, so you know, take advantage of it! In the mesón La Hacilla, you can enjoy some delicious game meats from the mountains, or its traditional güejareño dish. As a piece of information, we finish making your mouth water: the black pudding of Güejar is exquisite.