Sometimes the smallest things make a difference, don’t they? Especially when they are gestures of generosity and altruism. This attitude is very pilgrims, and it is the one that has led a couple from Pontedeume to go viral in networks with the simple gesture of offer a canister of water and other food so that the pilgrims, on their way through the Camino de Santiago, can replenish your strength and quench your thirst. Let’s get to know the story of this couple and their viral story of pilgrim hospitality.

Carla Lorenzo and Fernando Ramón are a young couple who live in the village of Cermuzo (A Coruña), on the way out of Pontedeume, on the the English Way of Santiago. After a steep climb that begins in the church of Santiago de Pontedeume and leaving behind this town of noble medieval past, the pilgrims find this oasis at the door of the couple’s house, and we say an oasis because the slope has its own, 1.5 kilometres of steep slope along the slopes of Mount Breamo. Whenever we do this stretch, more than one pilgrim’s tongue sticks out, so we are grateful for the kindness of Carla and Fernando. 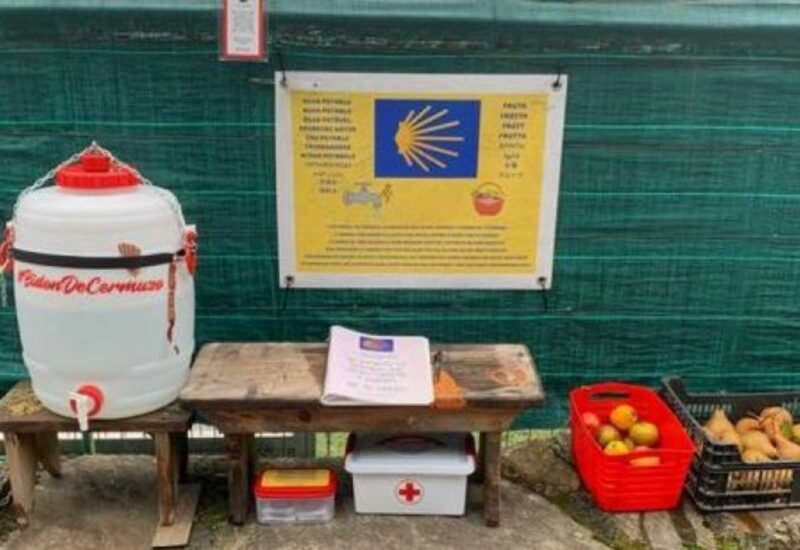 Located around the 83rd kilometer of the English route, in the second stage if we start from Ferrol (A Coruña), the exterior wall of the same has become a a kind of grocery store insolidarity with the pilgrims, where apart from the famous water canister, we can also find apples, lemons or pears. Eventually they included a drinking fountain for pilgrim dogs a first aid kit with masks, band-aids, Compeed, sun cream, wound spray and disinfectant gel. As if their altruism wasn’t enough, they even offer handmade bracelets and necklaces so that walkers can take home a small souvenir. They were very nice, and they also left a booklet for the pilgrims to leave their memories in the form of a text.

Thank you so much 😊 you guys are great!!!! #caminoingles #caminodesantiago #xacobeo2021 #peregrinosquemolan

All this took place last August 2021, although in October of this year we passed by and confirmed that this little paradise continues to offer help to pilgrims. The eighth month of the year is usually very hot, and also in Galicia, so one day Carla empathized with the effort of the pilgrims and installed a can of water so that they could quench their thirst.

This idea actually came up during a family meal on a hot day. After the idea came up, Carla’s father bought a canister with a dispenser and installed it outside the house. Filled with frozen bottles to keep the water cold, the jerry can was soon joined by fruit from his parents’ garden and medicines, in this case as an initiative of the couple.

So, one day Carla decides to publish on her Tik Tok account a video in which she is seen changing the bottles of frozen water from the can. A simple video had a huge impact, as Carla went from 60 followers (close friends) to 60,000 in just three weeks. Even the television echoed this gesture, and the presenter of La Sexta Dani Mateo shared the news on the program “Zapeando”, which helped this initiative to go viral.

“For me it was unthinkable, unbelievable, that a can of water was so interesting… and when we found out it had been on TV, we freaked out,” says Carla.

Very crack Carla, and she looks very nice in the videos. As we can see in them, the pilgrims began to leave messages of gratitude and even donations, which little by little grew and the couple decided to reinvest in their cause, buying the canine drinking fountain and other items, all for the pilgrims. One day she even found a pair of slippers in good condition, and through Tik Tock the pilgrim who left them there told Carla that she would give them to a pilgrim who might need them.

See you at ##Xacobeo2022! Thanks to everyone 🤩❤️ ##parati ##BidonDeCermuzo ##caminodesantiago ##fypシ

“And remember… It doesn’t matter how slow you go, as long as you don’t give up!”

So says the phrase with which they encourage the pilgrims, which is also the one that appears on some T-shirts that a company from Madrid has given to the couple to give to the pilgrims. Fortunately, everything good is contagious, and this beautiful initiative is already a kind of pilgrim humanitarian chain.

T-shirts, trainers, towels and so on, from everyone for everyone. Altruism is a value that, as we can see, all the pilgrims feel and share, in order to make the Camino easier for others. We love this gesture, and whenever we pass through Cermuzo we stop to visit this viral drum and say hello to Carla and Fernando. Let’s hope that the #bidóndecermuzo, which as we can see already has a hashtag, will always be on the way for pilgrims, and it will certainly continue to be so.

Carla, whose Tik Tok account already has more than 70,000 followers, hopes to walk the Camino de Santiago very soon with her partner Fernando. We don’t know which route they will do, maybe the English Camino de Santiago, but whatever it is, we hope to see them very soon following the yellow arrows.