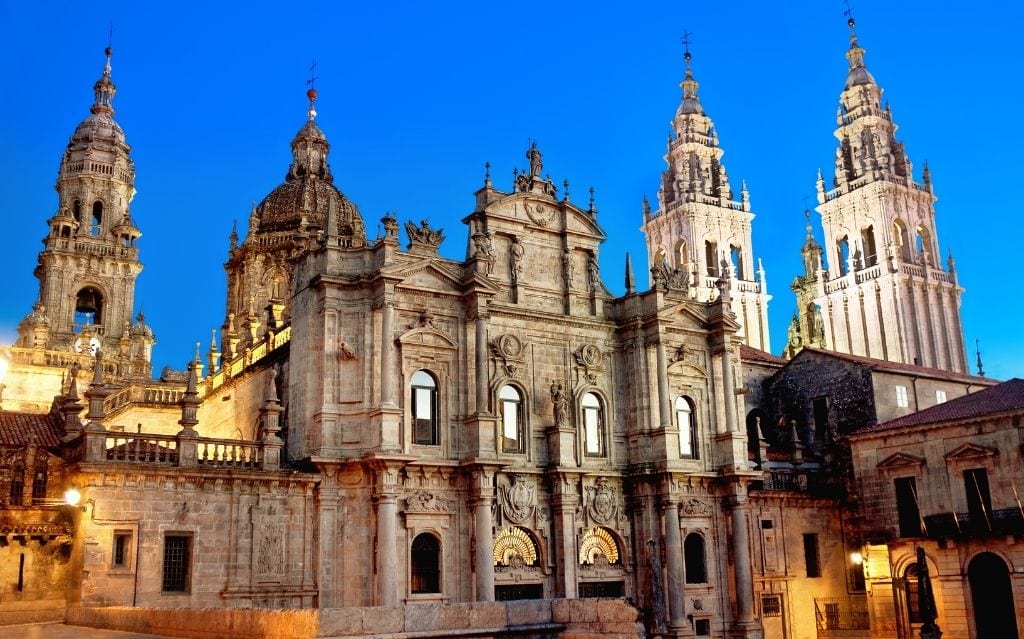 How to get to Santiago de Compostela?

Santiago de Compostela is the capital and one of the most important cities in Galicia. This makes it a perfectly connected place with easy access from anywhere in Spain and Europe. The plane is the most recommended way to cover long distances. Santiago has a well connected airport which is a destination for national and international flights.

Land transport is also highly recommended, whether by car, bus or train. The Galician capital is connected by motorways and rail networks to the main cities of Galicia such as Coruña or Vigo as well as to Madrid.

How many days are recommended to visit Santiago de Compostela?

This is something very personal that will depend on the time we have available. We should not forget that Santiago is one of the most important cities and capital of Galicia, yet its dimensions make it a welcoming and easy to visit place.

Most of the tourist attractions are close together so two or three days is an ideal time to get to know the Galician capital. One of the handicaps can be the climate, quite rainy, which can make us lose some day. Although we must bear in mind that Galicia without rain would not be Galicia.

Santiago, home to one of the oldest universities in Spain, also stands out for its youthful and leisurely atmosphere. This can be seen in the great atmosphere in its streets and leisure places until late at night.

What to see in Santiago de Compostela?

Here you will find the monumental centre of Santiago de Compostela and a meeting point for pilgrims who come to the city from all the Jacobean routes. Its name comes from the workshops (obradoiros in Galician) of stonemasons who worked on the construction of the Baroque facade of the Cathedral.

The most important buildings of the city are concentrated in this square: The Cathedral, the Hostal de los Reyes Católicos, the San Xerome school, seat of the Rectorate of the University and the Raxoi Palace, seat of the Town Hall. 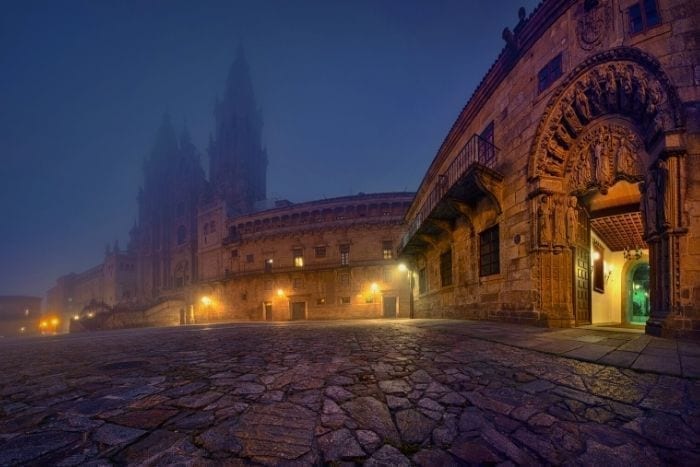 Without doubt the emblem of Santiago is its Cathedral. An architectural jewel, the work of Archbishop Gelmirez and Mestre Mateo, the result of more than 700 years of construction in which different styles, expansions and continuous restorations can be appreciated.  At present, the visit to the Cathedral of Santiago is free, but you have to pay to enter the museum and the Portico de la Gloria.

The second most visited place in the Galician capital just behind the Cathedral of Santiago.  It was built in 1937 to house all the vendors in the same place, the current building consists of more than 5600 square meters where you can enjoy the freshest and most ecological products of the Galician gastronomy. Don’t forget to buy and talk to any of the nearby bars so that they can prepare your meal on the spot. A must see.

If there is one thing that stands out in Compostela, it is its squares and fountains decorated with statues. You will love taking a walk through the labyrinth of cobbled streets in the city centre and discovering new monuments along the way.

It is so called because it was the place where the goldsmiths had their workshops in the Middle Ages. In the centre of the square you will find the Fonte dos Cabalos, opposite the Casa del Cabildo, which has civil exhibitions that you can visit for free. 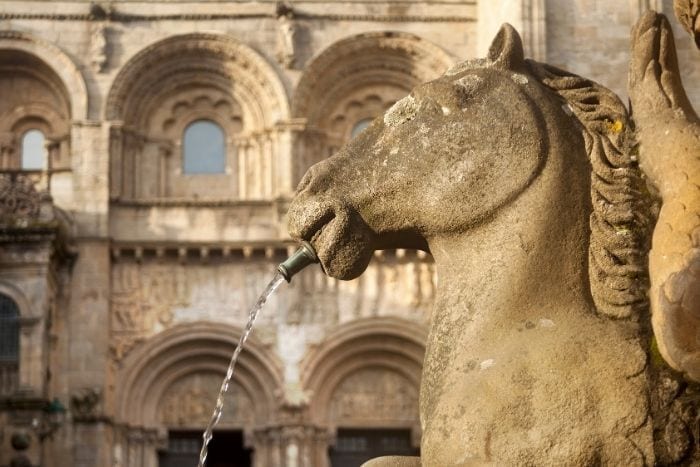 It is bordered by the Monastery of San Martín Pinario, the Archbishop’s Palace and the Acibechería façade of the cathedral. 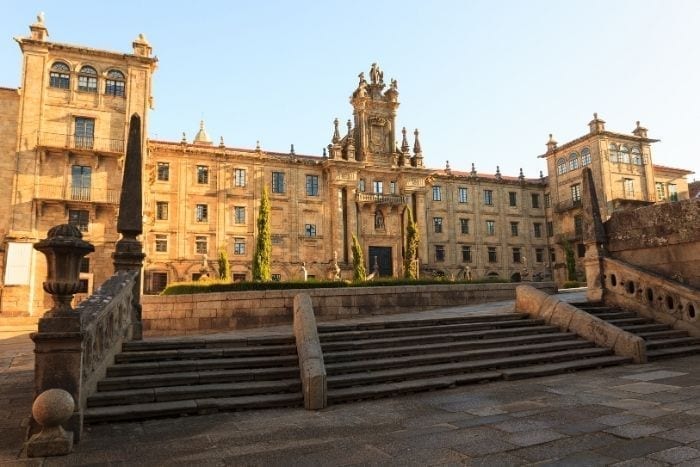 Here you will find the Holy Door of the cathedral, which only opens in the Holy Year, that is, when July 25th falls on a Sunday.  This square is divided into two levels. The upper part is known as the Quintana de los Vivos and the lower part is called the Quintana de los Muertos, as burials were carried out here in the 18th century.

You can also find in this square buildings such as the Casa de los Canónigos, the Casa de la Parra and the wall of the monastery of San Paio de Antealtares, whose church houses a Museum of Sacred Art. 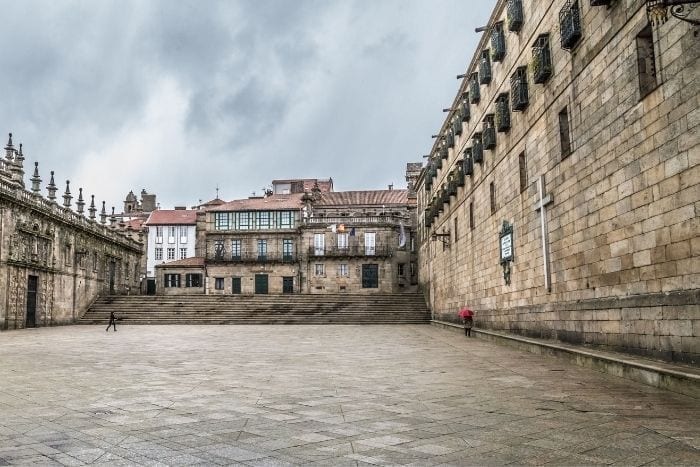 One of the most beautiful and lively squares in Santiago, where its most emblematic streets end: Rúa Nova and Rúa do Villar. Here you will find the Fonte do Toural, and the Pazo de Bendaña, from the 18th century, now the Eugenio Granell Foundation-Museum.

A 12th century forum where the people met and where the archbishop’s ordinances were read, later the most important market in the city would be held, changing its name to Plaza del Campo. When the market moved to the Plaza de Abastos at the end of the 19th century, it acquired its current name. In it, the bust of the writer of Don Quixote stands out, raised above the fountain.

Although Santiago de Compostela stands out for its great number of parks and green areas, we could say that this is one of the main lungs of the city. For centuries it was a meeting point for people of all ages in Santiago, and it stands out because of the impressive views of the cathedral’s façade.

Here you will find the famous statue of the two Marías, which pays homage to two women whose story will leave no one indifferent. 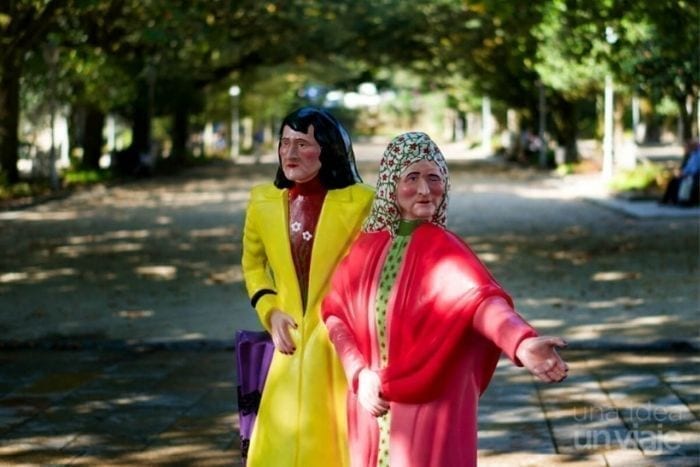 The City of Culture

You are in front of one of the most controversial buildings in Galicia.  A risky creation by the architect Peter Eisenman, sitting on the top of Mount Gaiás.  Currently the gigantic building, apart from housing the Library, the Museum of Galicia offers a varied cultural programme: exhibitions, concerts, conferences, cinema, seminars, workshops of all kinds and avant-garde cultural projects.

Pilgrims who follow the French Way are in luck, as they are bound to pass through this point. It is the best place to contemplate a surprising panorama of the city. 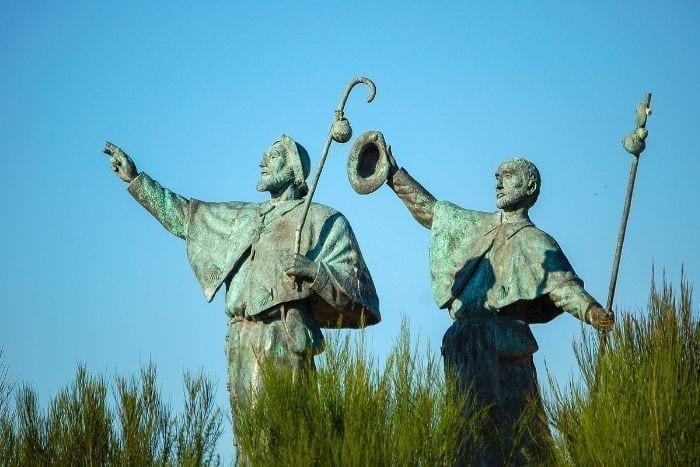 We are not exaggerating if we say that in Santiago we eat in luxury. There are an infinite number of places where you can eat good, beautiful and cheap food without losing quality. Its proximity to the Galician coast makes seafood its main, but not the only, attraction.

Among its most prized products we can also find fresh fish, the Padrón peppers and the world famous Octopus a Feira or Octopus a la Gallega: cooked octopus seasoned with olive oil, salt and paprika that you cannot miss.

The gastronomic offer is completed with typical dishes such as the Galician broth, the empanada, the lacón con grelos or the Galician beef with denomination of origin that can be eaten in any of its forms: churrasco, chuletón or solomillo.

To water these delicacies do not forget to try some of the wines with denomination of origin of the land or its most famous beer: Estrella Galicia. To top it off, there is nothing better than an orujo or a coffee liqueur to accompany a piece of Tarta de Santiago.

With an almost unlimited gastronomic offer, choosing where to eat can become a real odyssey. Therefore, to make your task easier, we have collected below our personal recommendations where you can enjoy the best quality at the best price:

If you want to try Galician seafood, check this two restaurants: El Sexto II (Rúa da Raíña, 23) and Xantares (Rúa do Franco, 40). Another good option is to go to the food market. There you can buy whatever you want and for a reasonable price any of the adjacent restaurants will cook it for you.

To taste the famous Octopus a Feira and/or a good Galician beef steak we recommend Restaurante Don Manuel. Another good option, especially if the weather is good, is the pulpería O Tangueiro, located on the outskirts of Santiago and an obligatory stop for many pilgrims.

For tapas, the bar La Tita (Rúa Nova, 46) has the best omelette in Santiago. On the other hand, the restaurant A Orella (Rúa da Raíña, 21) is a good, nice and cheap place where, as its name suggests, they put incredible pig’s ear tapas. Other recommended places are Bar Orense (Rúa da Raíña, 25) with one of the best coffee liqueurs in the capital, and wine bars at only 50 cents.

To enjoy Santiago’s nightlife, the Casa das Crechas  bar offers good live music and a magnificent decoration. The Pub Momo (Rúa da Virxe da Cerca, 23) has three different rooms where you can go out to party or have a more relaxed drink. Another good option is A Gramola with its typical live Celtic music. To be informed about the cultural activities, don’t forget to take a look at the Compostela Hoxe agenda with a broad summary of all the events that are organised daily.

Let yourself be surprised by the magic of Compostela

If you have come this far, you will have already realised that Santiago has many places and experiences to discover for those who visit it. Whether you are a pilgrim or just passing through Galicia, this is an essential visit that you are sure to enjoy.

Do you know other places that are not included in this article? Don’t forget to leave us a comment with your recommendations.

-What is the best time to make the road to Santiago?