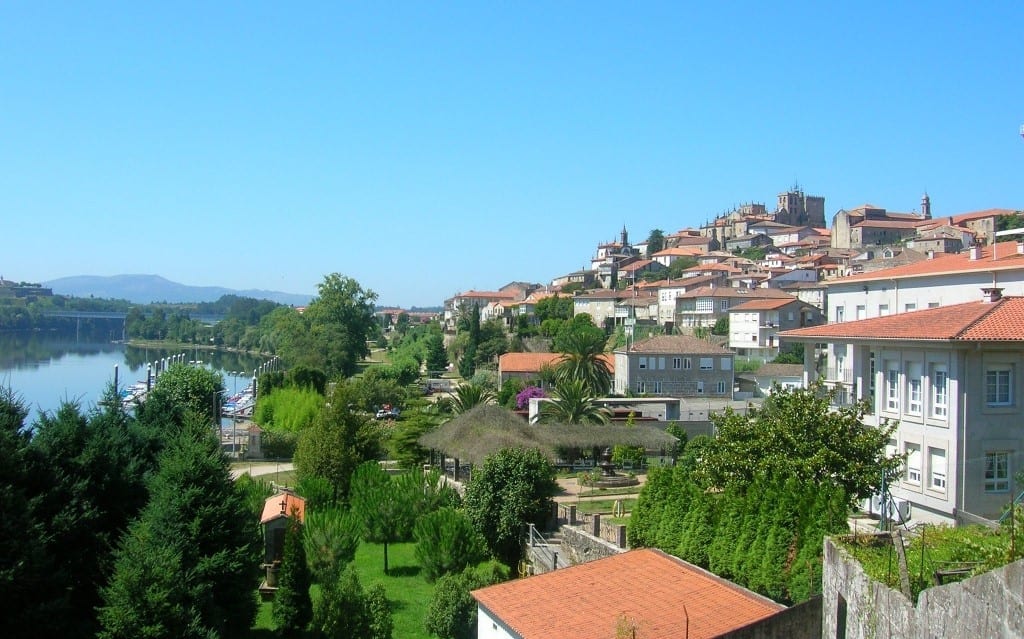 The city of Tui (or Tuy), is located in the south of Galicia, specifically in the Baixo Miño region. This beautiful town has a very valuable old city, which has been declared a Historic-Artistic Site. It is home to one of the most famous cathedrals in Galicia: the cathedral of Santa María de Tui.

In addition to all its natural, heritage and historical elements, Tui is also an outstanding place because it is the point chosen by thousands of pilgrims every year to start the route of the Portuguese Way of St. James. Tui is a border town, separated from Portugal by the river Miño. Since 2012 Tui and Valença do Minho form a Eurocity.

What to see and to do in Tui?

Tui is a place that has been inhabited since prehistoric times. From the castrexa period, castra sites are preserved at the top of Mount Aloia. Later, since Romanization, many peoples and cultures have passed through Tui, such as the Romans, Swabians, Visigoths, Vikings, Muslims and Jews, who left their mark and built the history of the city. It was even declared one of the 7 provinces of the old Kingdom of Galicia, around the year 1500. This is due to the importance of Tui during the Middle Ages, which has left us one of the best historical centres in the whole of Galicia.

In the following lines we invite you to take a walk through this beautiful city so that you can discover each and every one of its corners.

Like many other buildings from the Middle Ages, the cathedral of Santa Maria de Tui started its construction in the year 1120 in the Romanesque style and was later finished in the Gothic style. Its solid and sturdy appearance shows the basic Romanesque style, which contrasts with its pointed portal, one of the first Gothic portals in Galicia. The cathedral’s cloister, in Gothic style, is one of the best preserved in the whole region. Furthermore, the cathedral complex also conserves the largest Romanesque cathedral chapterhouse in Galicia.

The cathedral of Tui was declared a Cultural Interest Property in 1931 and is open to the public for visits, paying an entrance fee of 5 euros. The Diocesan Museum is located in the same square as the main entrance to the cathedral: Plaza de San Fernando. 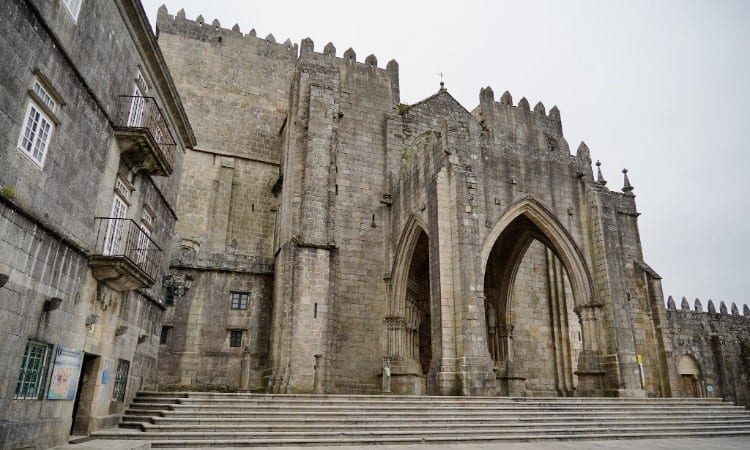 This church is a unique example of Portuguese Baroque in Galicia, built over the house where the Dominican saint San Telmo died. This style is also known in the area as baroque miñoto. It is one of the most visited religious monuments next to the Cathedral of Santa Maria. It contains frescos dating from the beginning of the 19th century, which makes it a very complete and worthwhile monument to visit. 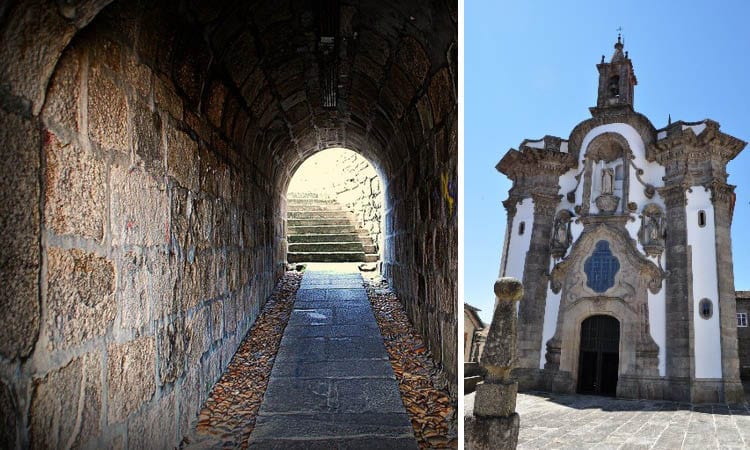 If you are a nature lover and are fascinated by landscapes with great panoramic views, you are practically obliged to take a route on Mount Aloia. Mount Aloia was the first natural area declared a Natural Park in Galicia. It has great heritage elements such as the Castro de Alto dos Cubos, the Cyclopean wall and beautiful botanical routes and trails of great ecological value. In addition, from the Park you will enjoy an infinite number of routes and viewpoints with panoramic views of the Miño and its privileged mouth. 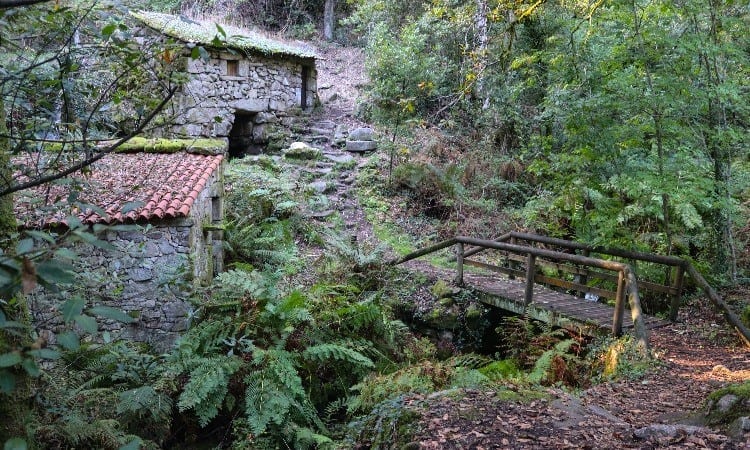 An architectural wonder that links the Portuguese and Galician banks of the Miño River. Although it is said that it was designed by the famous Gustave Eiffel, it is known that the engineer and deputy from La Rioja Pelayo Mancebo y Ágreda was in charge of carrying out this project. Take a break to immortalise the incredible views offered by this marvel of iron architecture. If you start your Portuguese journey in Portugal, you will cross this bridge to reach Tui. 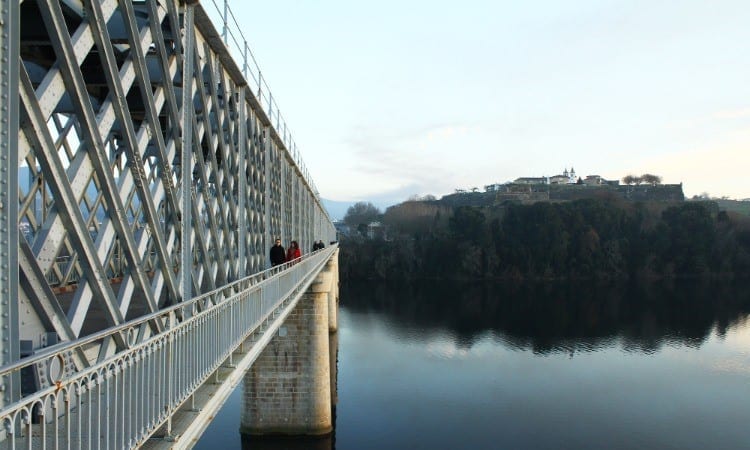 Other places in the historical centre

Our recommendation is that you get lost walking through its streets, so that you can discover all its corners. One of the most unique streets is Entrefornos, from which you can go down to the iconic Plaza Frómista. Drop into the Plaza de la Estrella and contemplate the beautiful views of the Miño and then go up the Clarisas tunnel to the cathedral again. To enter the new area of the city, hand in hand with the Corredera promenade, you must cross the Porta da Pia, one of the gates that closed the old walled city.

One of the main starting points for the Portuguese Way is Tui. For this reason, this city offers us several options for accommodation, depending on our tastes and budget. Below we list some of the most outstanding places:

A more than impressive hotel, all this because it is one of the most majestic buildings of the time. Located in a natural and quiet environment of the city, next to the Miño river, it is one of the best options for the most exquisite travellers.

Quiet and charming hotel with an exceptional location, 8 minutes from the centre. The views of the Cathedral of Santa Maria are always present in its rooms. Its wine bar and restaurant, as well as its swimming pool, which is open in season, are two of the highlights of this accommodation.

For those pilgrims who decide to do the Portuguese Way as well as for visitors who do not want to waste time on accommodation, this is a very good option. This hostel has all the comforts. It has a terrace, a kitchen and a dining room, as well as several fully equipped bathrooms. Its attention is unbeatable as well as its location within the old part of the city.

Other good places to stay are La Sigrina Hostel or the Hotel a Torre do Xudeo. 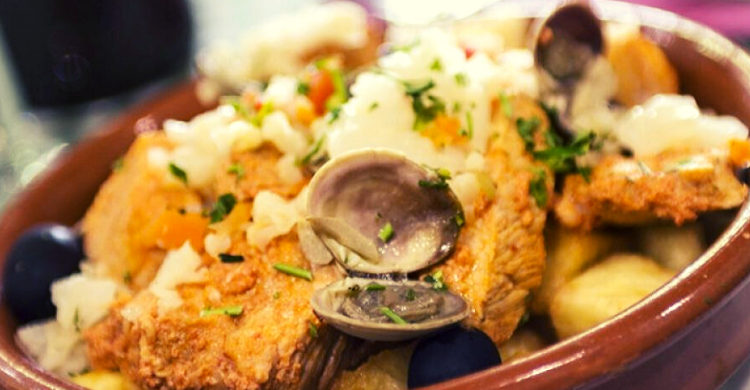 Here are some of the most popular places in Tui:

An incredible restaurant where the customer can interact with nature and eat the best products of the land. This beautiful place is famous for its cooking, which is based on the care of the product and the raw materials. Choose from fish, meat or rice dishes and delight yourself with their exquisite desserts, you’ll love them!

Here you will have the privilege of tasting delicious wines and tapas that will conquer you completely. Although it is called Tapería and works as such, it is also a restaurant that will surprise you with its abundant portions and affordable prices.

Experts on the grill, you will not have to choose between meat and fish as you will be served a mixed dish. Besides being famous for mastering Portuguese cuisine ,you will have the opportunity to enjoy authentic fados, which will turn your meal into a real experience.

How do I get there?

Fortunately this city has very good infrastructures and is perfectly communicated, by road, train or plane. It has the airports of nearby Vigo and Porto and has its own train station. Furthermore, it is perfectly connected by bus with the whole Atlantic axis.

We believe that we have awakened your desire to visit this beautiful medieval city, or perhaps you have already had the privilege of being there. If so, do not hesitate to share your experience with us with a commentary to further promote tourism in Tui.