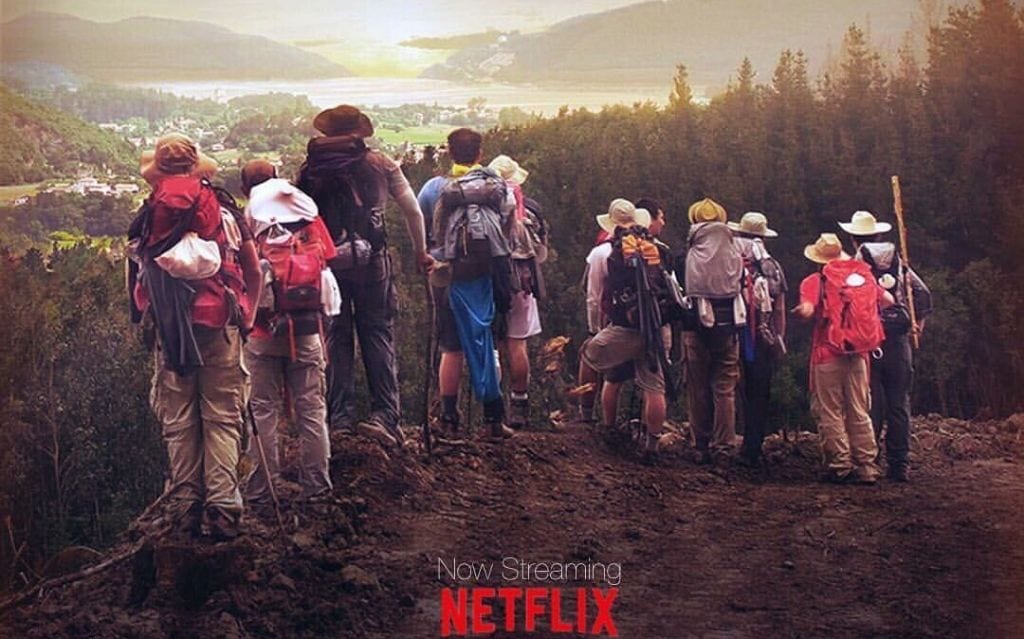 11 young people from the Arizona desert travel to Spain to do the Camino de Santiago. For 40 days and 1000 km, we accompany them on the greatest adventure of their lives: a physical and spiritual journey capable of changing their lives forever.

This is our favourite film of the Camino de Santiago. One day, Tom Avery (Martin Sheen), a renowned widowed ophthalmologist, is told that his son Daniel, with whom he has never had good relations, has died in the Pyrenees during a storm. Tom, desolate, travels to France and, when he finds out that his son was doing the Way of Saint James, he decides to finish the route in his honour

A prisoner who has just escaped from prison tries to recover the loot he hid a few years earlier in a remote and lonely village; but what he finds there is a worse sentence than prison. Sinister old men, strange disappearances, spirits, a peculiar priest and even the archpriest of Santiago himself are the protagonists of a story of terror, humor and fantasy. It features the voices of Luis Tosar, Geraldine Chaplin, Manuel Manquiña, Jorge Sanz and Paul Naschy among others.

Nacho (Fernando Tejero) is a photographer. Pilar is a journalist (Malena Alterio). They hate each other. However, they will have to pose as a couple to do a report on Olmo (Diego Peretti), a guru who solves couple’s crises by doing the Way of Saint James. During six days of travel through Galicia, they will be involved in all kinds of absurd, delirious and romantic situations… and it is already known that until the end of the road everything can happen…

At the dawn of the new millennium, a Dutch social worker, a famous Japanese poetess and a Brazilian girl have made the road to Santiago and, back to their countries, they look back on their memories. The trip also means a journey within themselves, sharing a physical and spiritual space with millions of pilgrims who have made the way since the Middle Ages. Laurence Boulting, author of documentaries like ”Eduardo Chillida” or ”Gernika, The Spirit of the Tree”, signs this work between the purest documentary and the fiction film. Boulting made a four-year journey along the Jacobean Route and met three real pilgrims (none of them professional interpreters), whom he chose to star in the film. The actor and director Lord Richard Attenborough puts his voice in the original narrativel.

After their mother’s death, three brothers learn that they will only get their inheritance if they walk together from Le Puy-en-Velay, in France, to Santiago de Compostela. The bad thing is that they hate each other and hate to walk. But their desire for money is stronger and they finally set off. They meet the guide in Le Puy-en-Velay, where they discover that they will go with a group of six other people. The way is long until Santiago de Compostela, and while we travel with them through some splendid landscapes, we witness the mishaps, anger, love affairs, fantasies and experiences of these nine characters.

A series of adventures set in Santiago de Compostela in the 11th century, when the cathedral was beginning to be built and Spain did not exist as such, divided into different kingdoms that fought against the invasion of Saracens and Almoravids.

The series tells the story of three brothers, one of whom, Pedro (Javier Rey), is kidnapped by the Saracens during an attack on his village when they are children. The other two, Gonzalo (Antonio Velázquez) and Esteban (Guillermo Barrientos), seek refuge in Compostela and grow up under the protection of Bishop Peláez, who is overseeing the construction of the large temple that houses the tomb of the apostle Santiago. Gonzalo ends up as captain of the domine guard; Esteban works as a stonemason in the construction of what will end up being the city’s cathedral…

The film tells the story of Teodora, who suddenly finds herself without a job and without her husband. What do you do when the future is a blank page? Accompanied by her friend Zeca and the Spaniard Milena, Teodora begins the most important journey of her life, a journey through Spain, specifically along the Camino de Santiago de Compostela: challenges, options and discoveries in a story full of humor, delicacy and sincerity

The Mexican friar Fray José de Guadalupe travels to Spain with the Mexican Children’s Choral Society to attend the celebration of the Compostela Holy Year. While the orfeón is triumphing and being contracted all over Spain. The  friar helps to arrange things between the former singer Pilar and her old love Diego. Friar José finds out that one of the choral society’s children, Jaime, is the son Pilar lost during the civil war.

Two French globetrotters who, from the outskirts of Paris, decide to go on a pilgrimage to Santiago de Compostela, meet numerous characters and live situations closely linked to religious beliefs.

-More information about films of the Way of Saint James