In this modality you will travel the 323 kilometers that make up the Primitive Way route, a hard and very beautiful Jacobean route, which is worth doing, Cycling the camino from the city of Oviedo. You will start from this city and cross the interior of Asturias and Galicia, discovering the most natural and rural parts of these two regions. The stages of this route are characterized by their hardness and by running between muddy roads and mountain paths, with many ups and downs. However, the distance of the stages is configured so that it is bearable to do. We assure you that it is worthwhile to do this Route to discover its privileged natural environment.

The old town of Oviedo (Uviéu) will be the starting point of Cycling the Camino in the primitive way, and will transport you to the Asturian Middle Ages. It is a small town, designed for the enjoyment of the traveller, thanks to its pedestrian streets in which every corner has a special charm. You cannot begin your journey without visiting the Fontán market, the cider boulevard or the impressive Cathedral, with its Gothic and Romanesque towers.

In this first stage, before beginning the itinerary of the primitive route, you will be able to make a small detour to visit the pre-Romanesque temples of Santa María del Naranco and San Miguel de Lillo, two very important constructions of the Asturian heritage. From here you will head to Grado (Gráu) where you can make a first stop. Your way will run from Grado, passing by the Gallegos bridge, L’Escampleru and crossing the Nalón river by the Peñaflor bridge. Afterwards you will continue towards Salas, passing by San Xuan de Villapañada, to ascend the Fresno pass and then descend towards La Doriga. From here, you will reach Cornellana and then Quintana, from where you will cross the Casazorrina bridge and reach Salas, the end of the stage.

Salas is a medieval village in inland Asturias, which currently conserves important heritage elements. Among other things, you can visit the Medieval Tower, the Valdés Salas Palace and the Collegiate Church of Santa María la Mayor. Of course, as in any corner of Asturias, you will be able to enjoy an unbeatable gastronomy.

Your first objective and resting point in this stage will be Tineo (Tineu). You will ascend to Porciles and then follow a route without great unevenness, passing through Boudenaya, La Espina and La Pereda, until you reach Tineo (Tineu). From here, you will continue pedaling alternating ups and downs through beautiful wooded areas, until you reach the Monastery of Santa María La Real de Obona.

Continue through places such as Villaluz and Campiello, until you reach the end of your stage in Pola de Allande. Once in Pola de Allande you will be able to relax and enjoy the tranquillity that it offers. You will have the opportunity to visit the church of San Andrés, the palace of Cienfuegos or the Indian mansions, very characteristic and typical of its urban landscape.

You will leave Pola de Allande in the direction of El Mazo and Penaseita. You will ascend by the port of Palo, one of the hardest points of the stage, and you will follow by landscapes of mountain range between the basins of Narcea and Navia. You will cross Montefurao and Berducedo, until you reach A Mesa, where you will be able to rest. You will leave A Mesa in the direction of the Salime reservoir, and then reach the end of the stage in Grandas de Salime.

In Grandas de Salime you can enjoy the rich local gastronomy, visit the Collegiate Church of El Salvador and the Ethnographic Museum. In the visit to the Museum, you will be able to learn how the rural world of this interior Asturias was, more and more forgotten and lost.

At this stage you will leave Asturias to enter Galicia. The first point of interest you will pass through is the Castro, the site of the Chao Samartín archaeological site, from the Bronze Age. Later you will begin the ascent of the Alto del Acebo to enter Galicia by A Fonsagrada. From here, you will have to save again two stops, the Alto del Hospital and the Alto de A Fontaneira, to reach your end of stage in O Cádavo (Baleira).

In O Cádavo, you can visit the Hospital de Montouto, an old pilgrims’ hospital that was founded in the 14th century. You can also see the Convent of San Francisco de Vilabade and the fraga de Marronda, a beautiful native Galician forest of great beauty and ecological value, with more than 170 species of trees.

This stage, much shorter than the previous ones, is designed so that you can have a rest day and get to know the beautiful and historic city of Lugo; since one of the main points of the Primitive Way is to get to know the three emblematic cities along its route: Oviedo, Lugo and Santiago de Compostela. you will pass through Vilabade and Castroverde, and you will enter the municipality of Lugo through the Cuesta Francesa in the parish of Gondar.

Afterwards, you will enter the city through the door of San Pedro, located in its wall, until you reach the Cathedral of Santa María, a beautiful example of Romanesque architecture.Lugo is one of the Galician cities most related to the Camino de Santiago. Ancient Roman camp of Lucus Augusti, this city is defined precisely by its numerous Roman remains, among which the wall stands out.

The Roman wall of Lugo borders the historic centre of the city with a length of more than 2 kilometres. This imposing monumental work was declared a World Heritage Site by UNESCO. Lugo is also known as the gastronomic capital of Galicia. You can’t leave without paying tribute to it in one of its restaurants, where quality and good prices are assured.

At this stage you will leave Lugo passing through the municipality of Guntín and the famous Roman milestone of San Román de Retorta. Afterwards, you will pass by Ponte Ferreira and get to Melide, linking with the French Way. Finish your stage in Melide, capital of the Galician octopus. In any of its many pulperías you will be able to taste this delicacy of the Galician gastronomy. Bon appetit!

In Melide, you will have the opportunity to appreciate the Cruceiro dated as the oldest in Galicia; and between one and a thousand heritage monuments, you will be able to visit the Museo da Terra de Melide, whose building was an old pilgrims’ hospital that was founded in 1502.

You’re halfway there! Find out more about Melide in this post!

In this stage you will undertake the way up to the long awaited goal: Santiago de Compostela. During the journey you will cross the main points of the last part of the French Way. You will pass by Ribadiso da Abaixo and Arzúa, where you can stop to taste their famous cheese Denomination of Origin Arzúa-Ulloa. Follow the Way through O Pedrouzo and continue towards Santiago de Compostela. When you arrive at Monte do Gozo, you will discover the reason for the name of this place: the tingling, that pleasant sensation that will invade you when you see from afar the towers of the cathedral, closer and closer.

As you descend towards the city, the blisters and fatigue will disappear until they disappear completely in the most magical moment of the entire Way: the entrance to the Plaza del Obradoiro.

You have arrived in Santiago de Compostela, the city where the rain makes magic on the wet stones. After having stamped your credentials in each stage and having collected your Compostelas, after all the effort, it will be time to enjoy the city, you will have earned it. We hope you will enjoy strolling through the historic quarter, enjoying a fresh beer accompanied by a delicious tapa, dancing and singing in a foliada, or trying some of its traditional liqueurs, among a thousand and one things that this small but great city offers.

We’re here! Find out more about Santiago de Compostela in this post!

This is a day of farewells for many, the end of a journey, and why not, the beginning of many. The last day will dawn with one more road in your lives, but not a road of miles, but of experiences, emotions and new friendships; a journey that will be projected in your lives and will help you keep walking free towards your own goals. You have finished that Primitive Way that you started seven days ago in Oviedo cycling the Camino.

You did it! Congratulations pilgrims!

*After leaving the lodging, end of service.

* All accommodations are of the best quality, carefully selected after years of experience and approved by our customers. 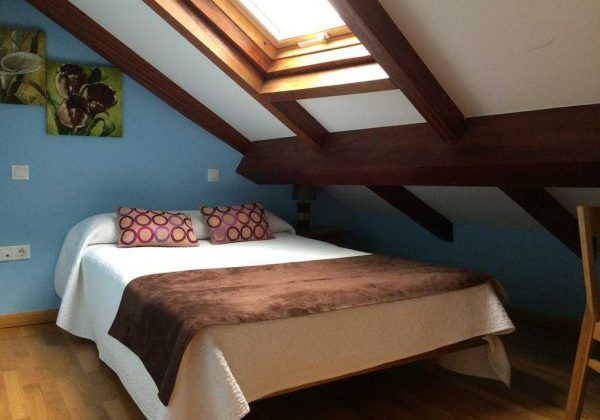 Accommodation in Hostels or Guesthouses has double, triple or quadruple rooms, always with private bathroom. They are simple, comfortable and without great luxuries, but very cozy, ideal to sleep and rest. This is our personal recommendation to do the Primitive Way Cycling the Camino from Oviedo.

*In the case of an individual reservation it would have a supplement.

Accommodation in Hostels or Guesthouses has double, triple or quadruple rooms, always with private bathroom. They are simple, comfortable and without great luxuries, but very cozy, ideal to sleep and rest. This is our personal recommendation to do the Primitive Way Cycling the Camino from Oviedo.

*In the case of an individual reservation it would have a supplement.