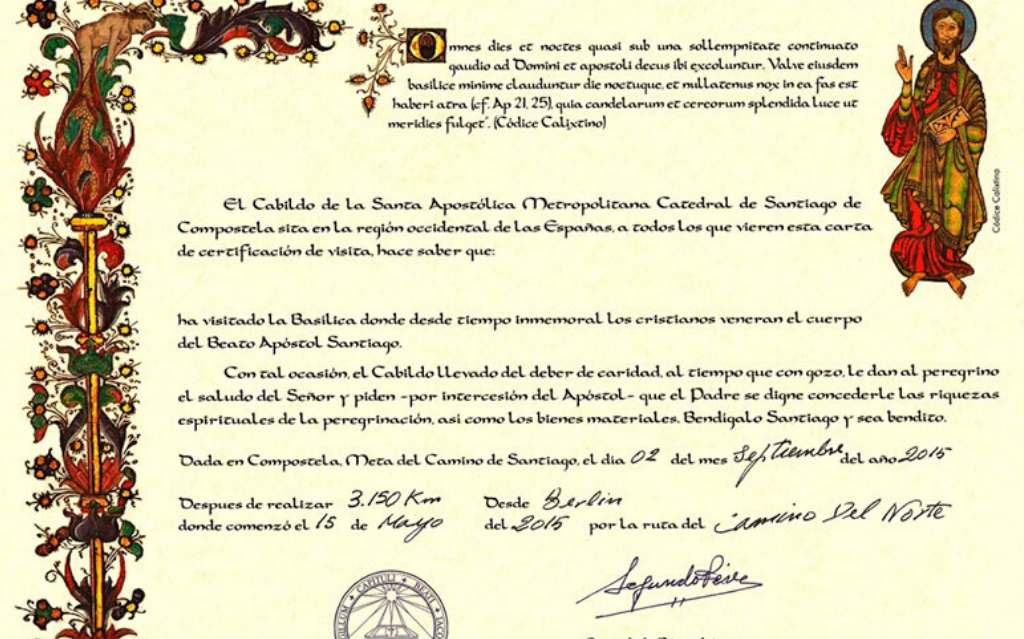 What is The Compostela?

The Compostela (erroneously known as Compostelana) is a document issued by the ecclesiastical authorities that certifies the pilgrims the realization of the Way.

Requirements to get the Compostela

In order to obtain it, only these three requirements need to be met:

2. Say that you have made the pilgrimage for religious or spiritual reasons.

3. Hand in at the Pilgrim’s Office the Credentials with the stamps you have collected throughout your pilgrimage. Remember that you must place at least two stamps a day to show that you have travelled the minimum distance. Once the data is checked, you will receive your Credential back.

What happens if I don’t have religious or spiritual reasons to obtain it?

As we said, prove religious or spiritual reasons is one of the requirements for obtaining the Compostela. But those who do not confess their religious faith and have made a pilgrimage for non-religious reasons will not leave empty-handed, but will receive a Pilgrim’s Certificate instead of the Compostela.

How many kilometers are necessary to receive the Compostela?

The minimum distance you must travel to get it will depend on how you do the Way of Saint James.

If you walk the Way, you will need at least 100 kilometres, that is, the last stages of each route. In the case of the French Way, you must start at least in Sarria, in Tui if you decide to do the Portuguese Way, Vilalba for the Northern Way, in Lugo if you decide to do the Primitivo, in Ferrol for the English Way and in Ourense if you choose the Sanabrés or the Vía de la Plata.

But if you do the Way by bicycle, you will need to cover a longer distance, 200 kilometres. Thus, you must start in Ponferrada if you choose the French Way, in Póvoa do Varzim for the Portuguese Way, in Tapia de Casariego for the Northern Way, Grandas de Salime for the Primitivo and from A Gudiña if you do the Silver Way.

Currently, pilgrims who make the Way of Saint James by sea are also allowed to get their compost. They will need to cover at least 100 miles of navigation, in addition to doing the last stretch on foot.

Can the Way be done in different years?

Of course it is. Many of the pilgrims do not know that they can do the Way in single stages and also get their compost.

The only requirement is that it should always be in geographical and chronological order. In other words, you can do a stage of the Way every weekend, but you must walk them in order and without skipping any of them until you reach Santiago.

Where to collect the Compostela?

Once you have finished your Camino de Santiago you can go and collect your Compostela. To do so, you must go to the Pilgrim’s Reception Office, located a few metres from the Cathedral.

Here you will find the address and contact information:

The office is closed on Christmas 25th December and 1st January, and that is why if you arrive on those days, the Compostela must be collected from the sacristy of the cathedral of Santiago.

The normal opening hours are divided into two periods of the year, from Easter to October 31st where the office will be open from 8:00 to 21:00.

From October 31st until Easter Week the office reduces its working hours, opening every day from 10:00 to 19:00.

History of The Compostela

The accreditation of having made the pilgrimage to the tomb of the apostle St. James was necessary already in the Middle Ages since the pilgrimage emerged spontaneously before the ninth and tenth centuries.

Just as pilgrims used a credential in the form of a safe-conduct or a bull to cross cities and border crossings to ensure their safety, when they arrived in the city of the apostle St. James, they had to accredit their pilgrimage in some way.

At first scallop shells were used, which served the pilgrim as accreditation but fraud was soon detected. The pilgrim’s shell was easily falsified so the highest ecclesiastical authority, the PAPA, had to decree penalties of excommunication for the forgers.

Already in the 13th century the letters of evidence were created, which was the ancestor of the Compostela.

It was not until centuries later that pilgrims had a place to rest and recover from the Camino. Thanks to the letters of evidence, pilgrims could enjoy accommodation in the Hospital of the Catholic Kings.

This hospital (currently the Parador de Turismo) was built by order of the kings after the reconquest of Granada and its function was to give shelter to the pilgrims. The hospital ended up becoming the most important in Galicia.

We hope you liked it and that you have in mind where you can get the compostelana in the new office of the pilgrim of Santiago de Compostela.